IN THE SHADOW OF HARQUAHALA MOUNTAIN

Without even looking up I knew our morning skies were clear soon as I stepped out the door this morning.  I could hear the stars laughing. 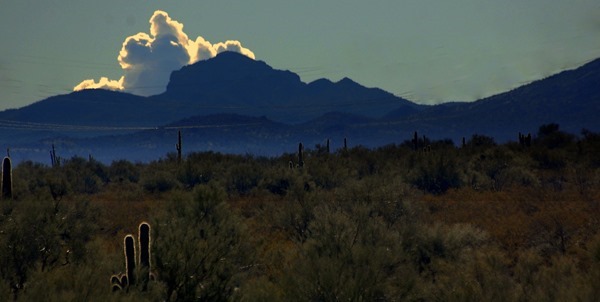 How nice to throw open our East facing living & dining room curtains & have all that sunshine pour in.  Jeep was covered with frost & I later had to run it’s defroster to thaw the windshield’s coating of ice.  A clear & cold desert night indeed.

Pheebs & I didn’t waste any time getting ourselves loaded into the Jeep & on the road.  With Libby’s heater running we made our way to Wickenburg’s Safeway store for a few groceries.  Always the same kind of staples for me with peanut butter, honey, cranbury juice, oatmeal, yogurt, & milk leading the way.  Grabbed a sandwich to go at the Deli & Pheebs & I were out of the parking lot within 15 minutes of entering it. 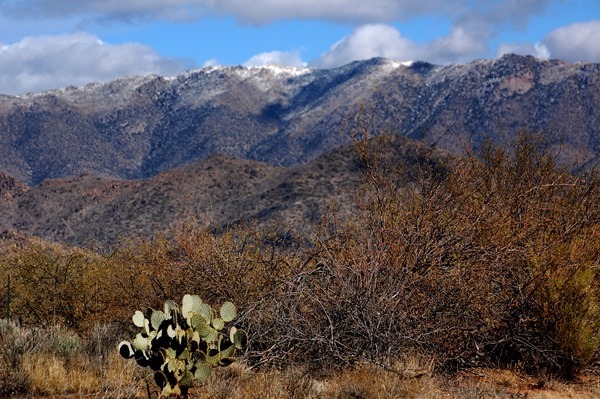 NOTICED A BIT OF SNOW ON THE WEAVER MOUNTAINS

We may be heading over to the Wickenburg Massacre site next week & seeings how it’s been a couple years since we were there last I wanted to make sure I knew where the turn off highway 60 was.  It is very easy to miss.  Well of course it was in the same place as last time we were out that way between mile markers 101 & 102.  Having verified the right hand turn off the highway Pheebs & continued west to the dusty little whistle stop of Aguila.

There is a rocky outcropping South-east of Aguila called the Eagles Eye & I was curious to see how close we could get to the Eagles Eye itself without too much strenuous effort.  Well it turned out not to close at all but we did manage to follow a few Jeep roads in the area plus hike up a short steep rock strewn hill to have us a look around the surrounding country side. 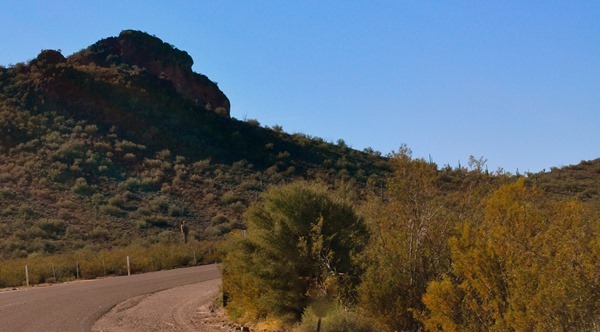 SCOUTED AROUND ON A FEW JEEP ROADS 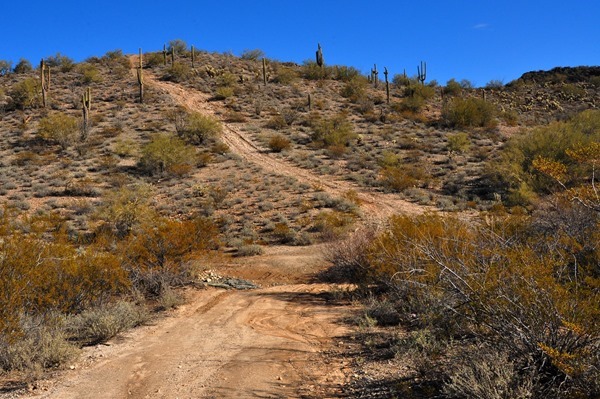 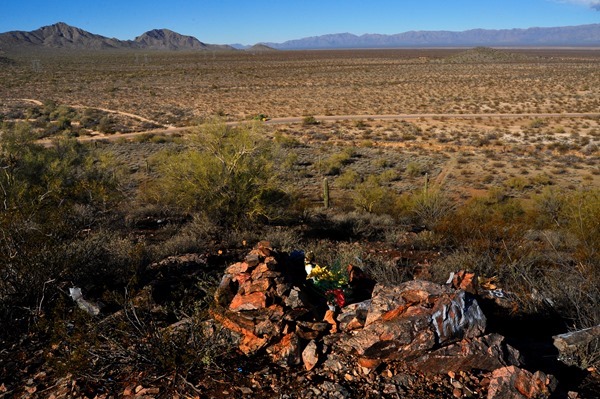 SOME KIND OF A MEMORIAL IN THE FOREGROUND LOOKING OFF TO THE WEST & THAT IS THE VALLEY FLOOR WE TRAVEL ACROSS ON OUR WAY TO QUARTZSITE, YUMA, OR BORREGO SPRINGS 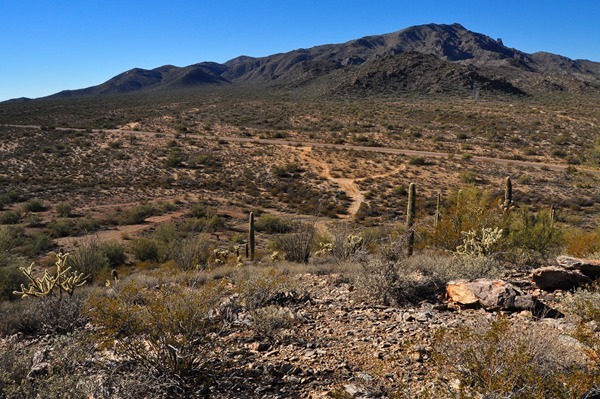 Eagle Eye Road running south & southwest out of Aguila is a nice quiet paved road running around the East side of Harquahala Mountain & we had traveled this road one time back in 2012.  That was the day we Jeeped ourselves up to the top of Harquahala Mountain.  Pheebs & I took a leisurely 15 mile drive to the Harquahala trailhead but we had no intention of heading up the mountain.  It was nearly noon so we turned around & headed ourselves back to Congress arrving home 45 minutes later.  Although today’s air was quite cool it was nice to be rolling along under sunny skies again with very little traffic, no people, wide open spaces, & mountain scenery all around us just stretching across all horizons & going on forever………..For the day Kelly, Pheebs, I took our Jeep Wrangler up Harquahala Mountain click here >>>>> The Day We Jeeped Up Harquahala Mountain. 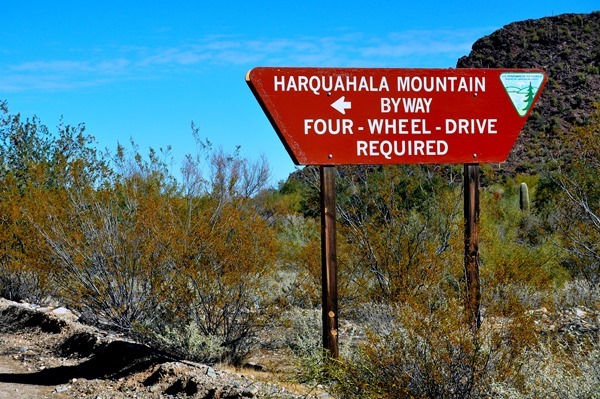 THE HARQUAHALA AREA IS POPULAR WITH HORSE & ATV RIDERS 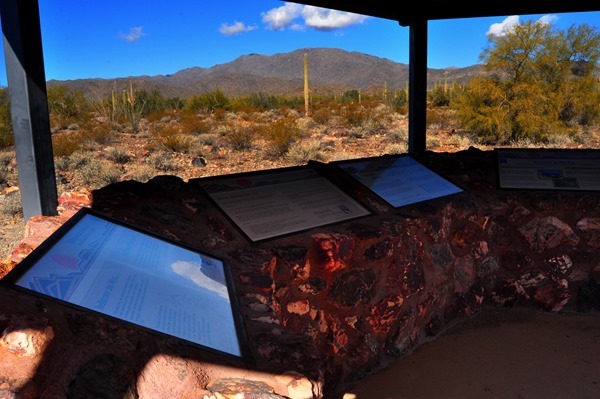 On the way back from Aquila traveling along highway 71 I could see the Weaver Mountains ahead & noticed a lot of snow in an area I figured was somewhere between Stanton & Yarnell so in the morning Pheebs & I plan to head out that way & pick up Stage Coach Road in Stanton heading North.  Might be able to get ourselves a few nice snowy mountain photos.

Now here's a bit of a funny thing.  I shaved off my beard late Friday afternoon & it wasn't until Kelly read my post Saturday morning that she realized I had actually shaved off my beard.  I wonder if she noticed I turned 71 last October.  Maybe not because I didn't tell her about that either:)) 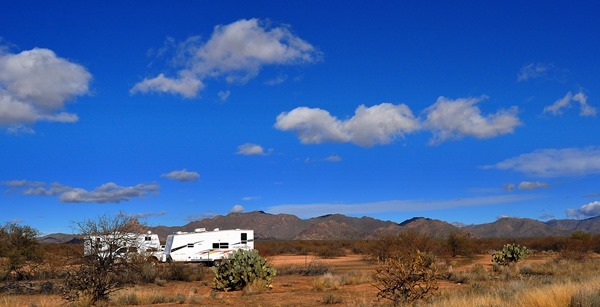 BOON-DOCKERS UNDER SUNNY SKIES ALONG HIGHWAY 71

Steve over at Hounds, RVs And Other Stuff just a few days ago had to bid a final farewell to his beloved Bassit Hound Winston & in his latest post today shares a heartwarming story about a little boy who fell in love with Winston through Steve’s blog.  You will want to read this post as the little boy’s Mother emails Steve after Winston passes away. 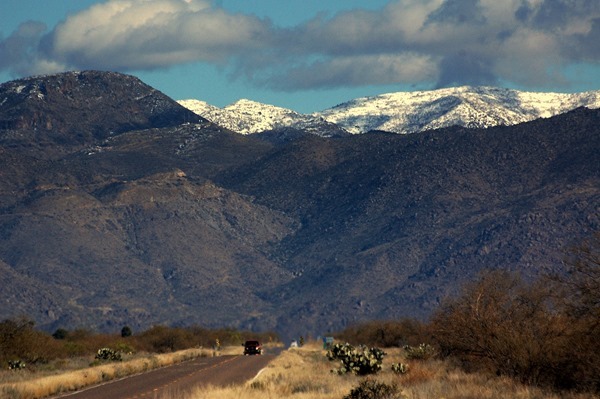 CONGRESS IS JUST ANOTHER 3 MILES DOWN THAT ROAD

GROANER’S CORNER:(( Two hunters got a pilot to fly them into the far north for elk hunting. They were quite successful in their venture and bagged six big bucks. The pilot came back, as arranged, to pick them up. They started loading their gear into the plane, including the six elk. But the pilot objected and he said, "The plane can only take four of your elk; you will have to leave two behind." They argued with him; the year before they had shot six and the pilot had allowed them to put all aboard. The plane was the same model and capacity. Reluctantly, the pilot finally permitted them to put all six aboard. But when the attempted to take off and leave the valley, the little plane could not make it and they crashed into the wilderness.  Climbing out of the wreckage, one hunter said to the other, "Do you know where we are?"  "I think so," replied the other hunter. I think this is about the same place where we crashed last year!"