With nothing or nobody to wake me up in the morning out here in the rig I sure have been sleeping in these past couple days.  It was 10 after 6 before I woke up thinking oh-no the day’s already half over.  Took me another 3 hours to get myself mobile enough to head outside & fill up the bird feeder.  Some days just seem to get off to a slower start than others.

A day trip plan came together to head off for Wickenburg via the scenic back road route that Pheebs & I often travel so we were all piled into the Liberty & on our way sometime before 10.  Just past the big Spurs round-a-bout we made a left turn into the desert on Scenic Loop road.  Always so nice to get out of that highway traffic & head off on some dusty Jeep roads where one doesn’t have to meet another single vehicle coming or going for miles at a time.  And so it was as we slowly made our way along enjoying the great Sonoran Desert scenery.  Lots of big Saguaros & prickly Teddy Bear Chollas. 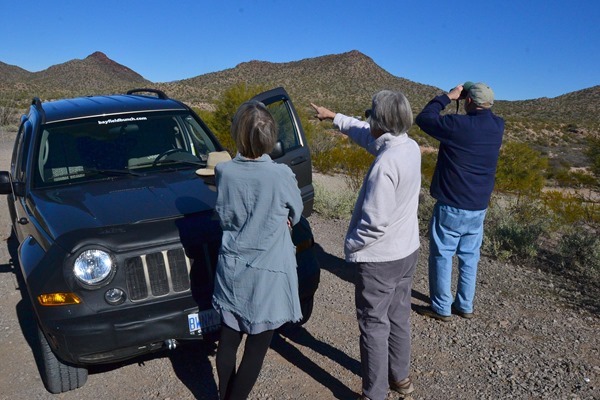 STOPPED FOR A LEG STRETCH & A LOOK AROUND 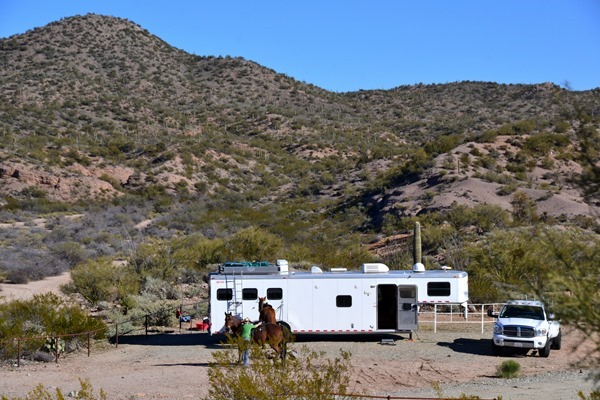 On our way into Wickenburg we took a drive through a popular boondocking spot across from the rodeo grounds.  Wandering Willy has been known to hole up here from time to time.  Lot of folks there with their bus conversions today. 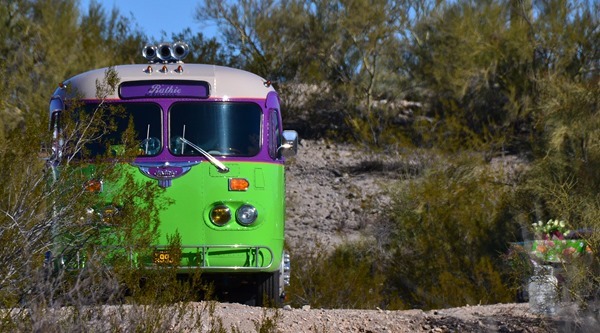 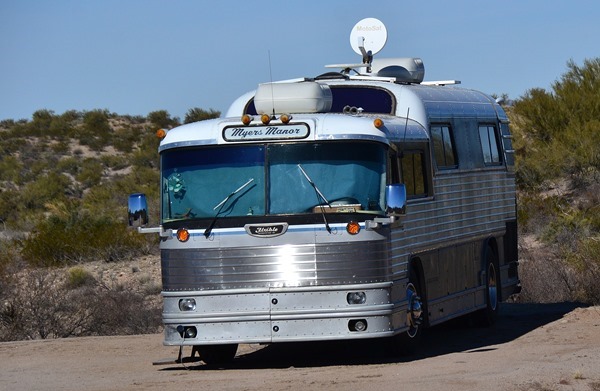 Peter’s cell phone rang while we were poking along looking at the buses & it was Kelly & Peter’s sister Kathy calling from Spencerport NY.   Kelly’s Mother had not been well these past few days & I think everybody’s heart stopped for a few seconds.  Fortunately it was regarding a different matter & everyone breathed a big sigh of relief.  We didn’t know half an hour later we would have a second such phone call scare but this time it would come from an entirely different source.

KATHY, THIS IS WHERE WE PARKED WHEN YOU CALLED TODAY…PETER’S IN THE FRONT SEAT TALKING TO YOU

Heading further into Wickenburg Kelly knew of a recently opened sandwich shop called The Local Press Sandwich Bar so we headed there straight away.  Kelly had heard good things about this place so we weren’t long in ordering us up some lunch.  Leslie & I each had a sandwich called a ‘Gobbler’ which consisted of Roast Turkey, Bacon, Apples, Brie Cheese, & Honey Mustard Dressing on Sourdough.  Really good & very tasty.  Kelly had a ‘Porky’s Nightmare’ which had Capicola, Pit Ham, Swiss Cheese, & Pickels on a Hoagy Roll while Peter had ‘The Local’ with Chicken Breast, Munster Cheese, Pickled Jalapenos, Bacon Honey/Chipotle, on Cibatta.  Only way I remembered all this was due to the fact Kelly brought a menu home with her & hey you can even get a ‘Blazing Saddles’ sandwich here.  Might want to eat that one outside though.  Kelly, Peter & Leslie also had a Curry salad to go along with their sandwichs.  Nope, I was going to touch that stuff!!   ‘The Local Press’ is a small building so a lot of their business is take-out & that’s what we did.  Took our sandwiches outside to a nice warm table in the sun beside some nice green patches of real grass.  Wow how nice was that.  We Northerners always love our green green grass of home.  While waiting for our sandwiches to be brought out Kelly’s cell phone rang & like the previous telephone call half an hour earlier……… it gave us an immediate scare. 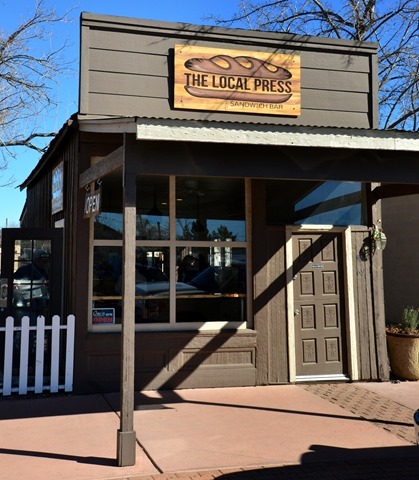 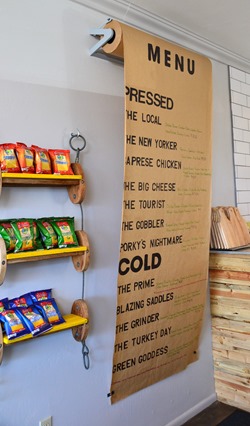 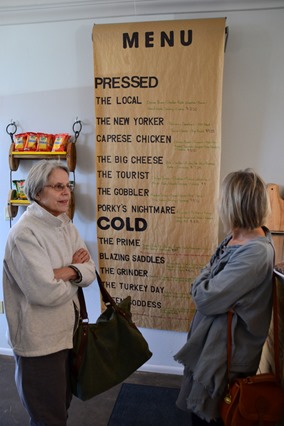 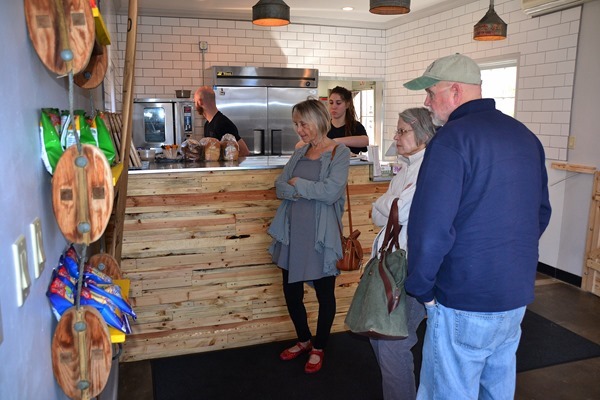 LOTS OF BIG DECISION MAKING GOING ON WHILE READING THE MENU 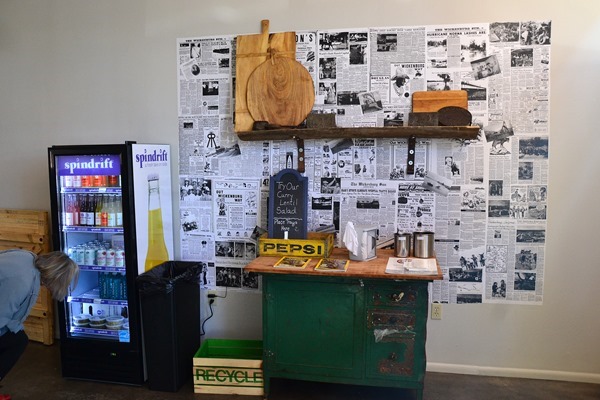 Kelly quickly rummaged through her purse & finally found the ringing phone.  When she answered it I heard her say a name….David Steinman.  “Oh-No” I thought, something has happened to Aunt Jean in Sarasota Florida.  Hadn’t seen or talked to my cousin David since we lived at the Weenie Roast Ranch near Fullarton Ontario back in the late nineties.  David lives in Bradenton Florida & also being related to Jean I thought for sure something had happened.  Turns out David just needed Jeans new phone number which had disappeared from his cell phone.  Whewwwww.  Nice to have a short chat with David though.  A short chat??  Well as I was talking to David our heated sandwiches arrived at the table & I was a-feared the 3 Desperados I was with might make off with my hot Gobbler if I wasn’t back to the table right quick.  Out here in these parts folks do weird things when it comes to either gold or food!! 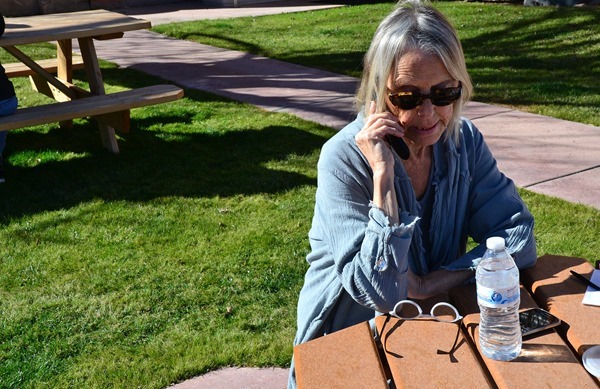 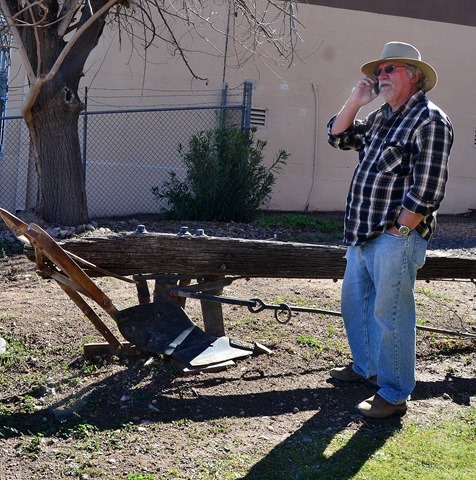 Leslie & Kelly browsed one Wickenburg shop before we headed for Safeway to pick up a few groceries.  We were back to Congress sometime before 2 with everyone quickly heading for their favorite resting spots. 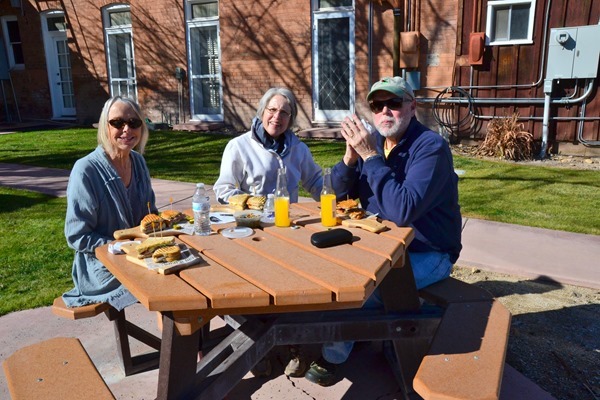 NEVER MIND THE PEOPLE, JUST LOOK AT ALL THAT LOVELY GREEN GRASS:)) 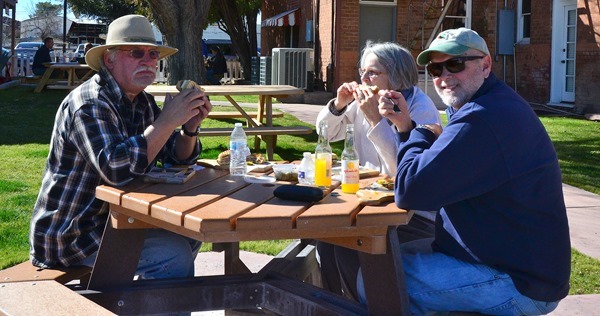 WE ALL LIKED OUR SANDWICHES……ESPECIALLY LESLIE:)) 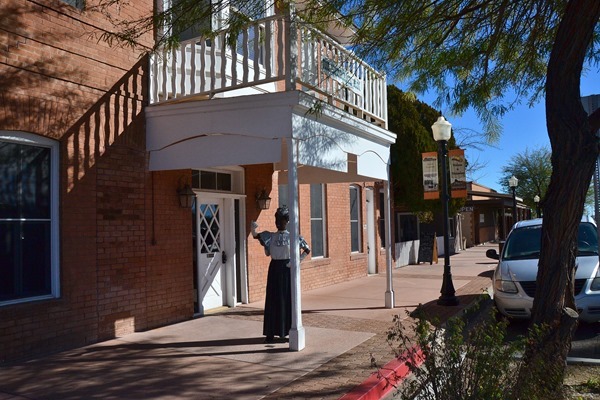 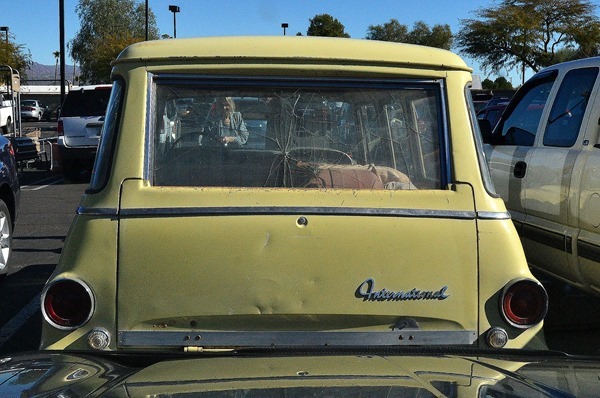 SPOTTED THIS OLD DUSTER IN THE SAFEWAY PARKING LOT & THE OLDER FELLER DRIVING IT TOLD KELLY HE HAS OVER 600,000 MILES ON IT

Heard a diesel engine running out by our front gate shortly after we arrived home & by the time I looked out from the rig Kelly was walking back from the UPS truck with a big box under her arm.  Ever since sending her new Lenova laptop back a bunch of weeks ago she has been on-line researching other laptops reading a lot of reviews etc.  Late last week she made a decision & today her new Asus Zen Notebook arrived.  She ordered it direct from Microsoft so it came with no bloatware like McAfee etc.  I remember it taking her a couple of frustrating days to set up that Lenova & today she had the Asus up & running in a matter of minutes.  So far she is very pleased with it.  Windows 10. 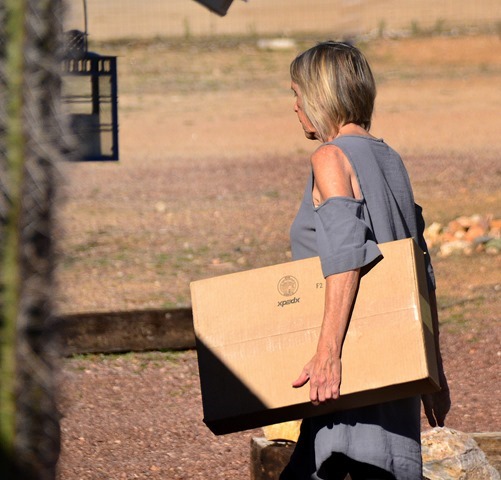 I think in the morning we may be headed off to find the Wickenburg Massacre site.  Pheebs will be able to come with us this time & I’m sure she will be glad to not stay home like she did this morning.  Poor little Weeniekins……………..

GROANER’S CORNER:(( How Do You Tell A Canadian From An American::

It used to be enough to ask him to say the alphabet. When the Canadian got to the end, he'd say "zed" instead of "zee". But 18 years of Sesame Street have taught a lot of Canadian kids to say "zee," and it's starting to sound as natural as it does south of the 49th parallel.

Another test used to be the word "lieutenant". Canadians pronounced it in the British was, "leftenant", while Americans say "lootenant". But American cop shows and army shows and movies have eroded that difference, too.

Canadians have been adopting American spelling as well. They used to put a "u" in words like labour & colour. The main organization in the country, the equivalent of the AFL-CIO, is still officially called the Canadian Labour Congress. But news organizations have been wiping out that distinction by adopting American spelling, mostly to make it easier to use news copy from such agencies as Associated Press without a lot of changes. So it's "Canadian Labor Congress" when the Canadian Press, the national news agency, writes about it.

Some pronunciations, considered true tests of Canadians, are not as reliable as they're thought. Take the word "house" for example. When some Canadians say it, it sounds very Scottish in American ears. Visiting Americans trying to reproduce what they hear usually give the Canadian pronunciation as "hoose".

The same for "out" and "about". The way some Canadians say them sounds like "oot" and "aboot" to many Americans. And when an American says "house" to a Canadian, the Canadian often hears a bit of an "ay" in it, something like "hayouse".

But pronunctiaiton isn't a good test because people from different parts of Canada speak differently. A resident of the Western province of Alberta, where there has been a considerable inflow of settlers from the United States, may sound like a Montanan or a Dakotan.

Then there's the ubiquitous Canadian expression "eh?" - pronounced "ay?" This is a better test because many Canadians tack it on to the end of every assertion to turn it into a question……..Now you know:))