QUARTZSITE TO YUMA ARIZONA FOR A COUPLE DAYS

Skies cleared overnight & we woke up to a nice setting Moon over the Trigo Mountains west of us.  Bit of a cool breeze on our early morning walk but it wasn’t long before the day began heating up.

A FEW OF OUR EARLY MORNING NEIGHBORS 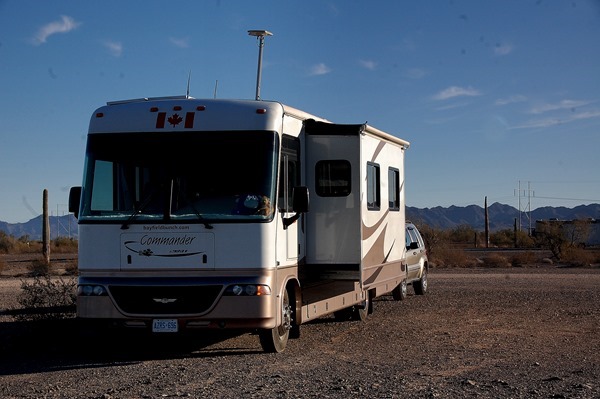 Our overnight stay at the La Paz area south of Quartzsite was a good example of why we prefer to boondock far from fellow RV'ers.  Many rigs scattered around in the desert here close by & many rigs generally means much big noise.  There were so many generators going Saturday night the air had a bad smell to it & somewhere to our northeast a group of 'ya-hooers' had a big monster Karaoke machine going & they were sure whooping it up.  ATV'ers off to our left had their machines a snortin & of course the highway a few hundred yards away generated it's own noise but at least the highway noise somehow sounded peaceful compared to the rest of it.  I'm not complaining folks, just passing on my thoughts.  This La Paz area is where Kelly & I first came to back in January of 07 with our truck & fifth wheel & it is the area we returned to each year for our first 5 years of coming to Quartzsite every January for the annual big RV rally in the desert.  Biggest one in the world. 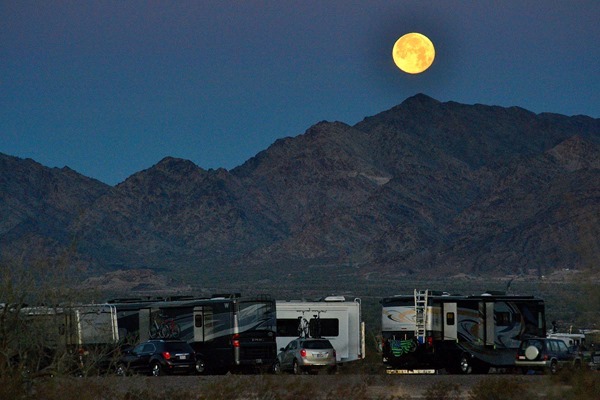 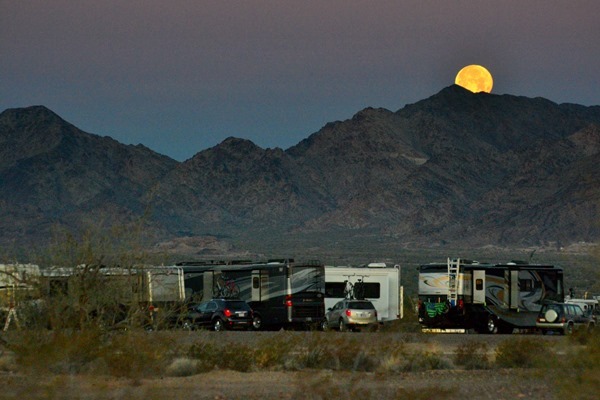 We hadn’t seen our good friends Jean & Skip since last winter until Saturday’s Bloggerfest & a large gathering like that it isn’t the greatest place to sit down & have a good heart to heart ‘catch-up’ visit so Jean & Skip this morning drove down from Plomosa Road north of Quartzsite to the Roadrunner area where we stayed for the night south of Quartzsite.  We have a lot in common with J&S & our lives seem to parrallel each other in many ways so it’s always interesting to sit down & talk with them & go over what’s been happening in the past year.   We had quite a chat before it was time to say & wave our good-byes shortly before noon.  Always kind of sad saying good-bye to friends in this RV way of life because with the Nomadic lifestyle people never know if they will ever meet again.  Jean & Skip are Canadians living on Vancouver Island…………. 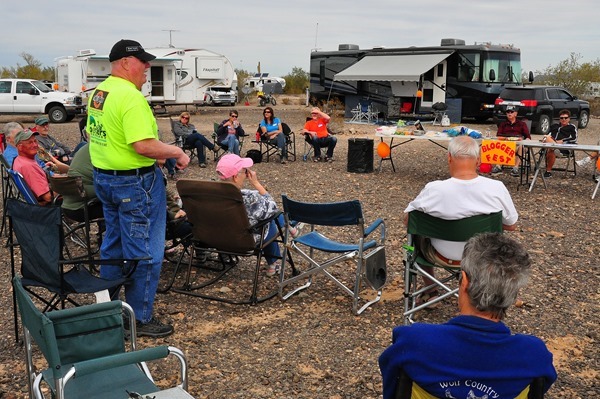 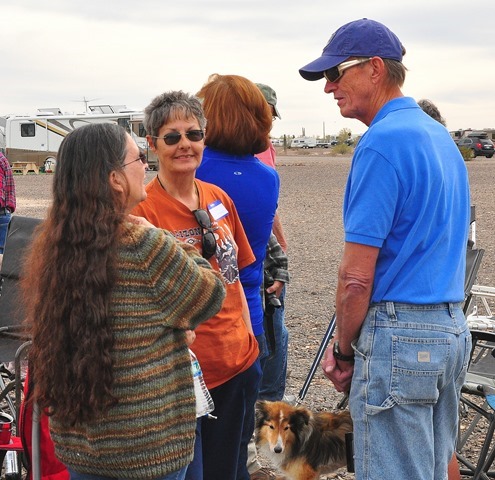 PAULA (SHADOWMOSS) FROM IN THE SHADOWS, GLENDA FROM CASITA ESCAPES & BOX CANYON MARK

THAT’S SASSY ON THE RIGHT SAYING, “HEY CAN YOU BELIEVE KELLY’S FALLEN ASLEEP OVER HERE” :)) 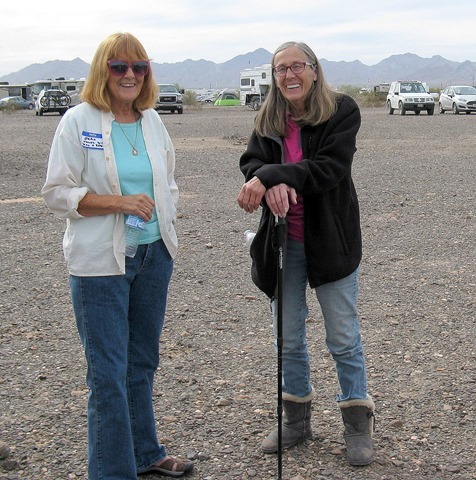 JEAN & THAT’S GAELYN ON THE RIGHT FROM GEOGYPSY 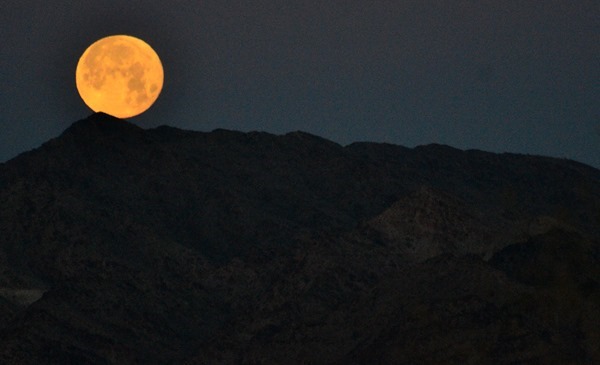 It was just about high noon when we rolled out of the Roadrunner area heading South to Yuma.  Watching the Kofa Mountains roll by on our left my head was filled with many great memories from our boondocking & Jeeping days in & around those mountains.  And a big shout out to Bill & Ann who just might be over there in the Kofa’s somewhere:))

Rolled into Yuma’s Northeast side & snagged us a McDonalds stop near Fortuna Road & Interstate 8.  While Kelly went in for some take-out coffee & grub Pheebs & I piled out of the rig & went for a walk on some nice green grass.  We love our desert life but ohhhhhh how nice to see that green grass & all those great green California trees. 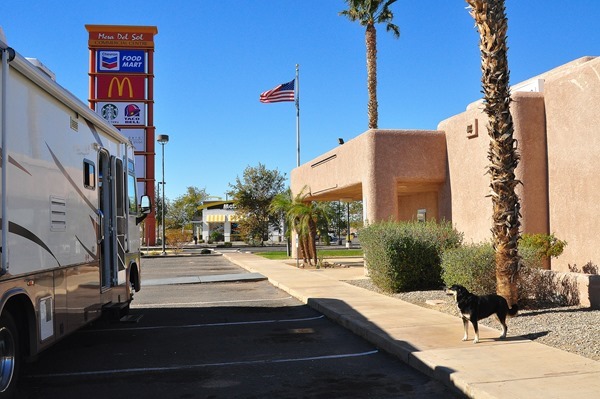 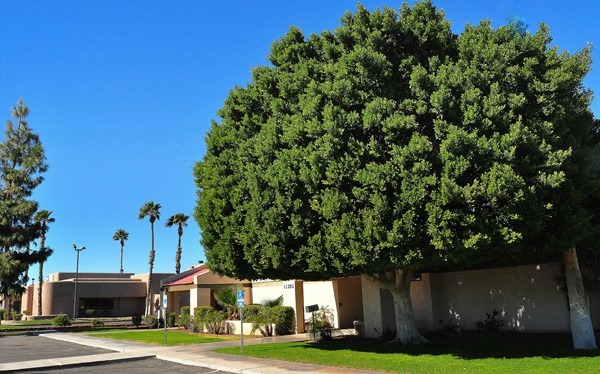 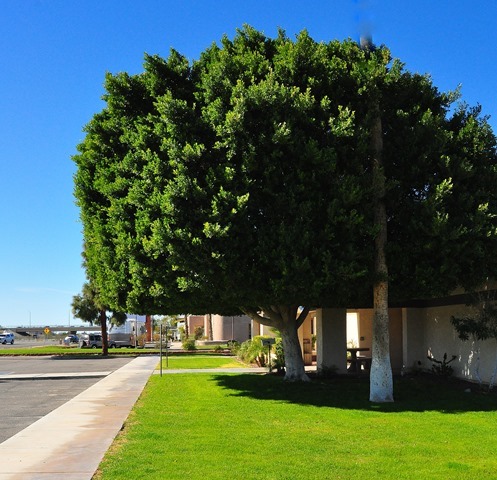 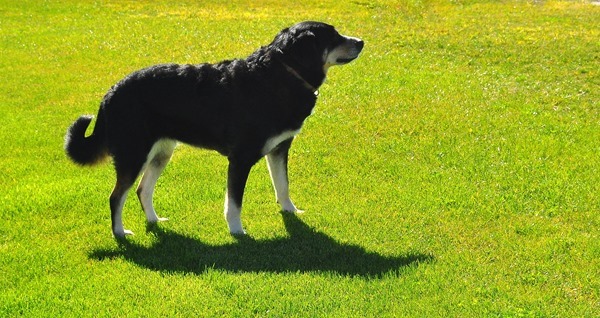 PHEEBS IS JUST LOVIN ALL THAT GREEN:))

Yuma is a familiar & comfortable place for us & we have been there close to a dozen times over the past decade.  Climbing aboard I-8 we headed west on probably one of the easiest Interstates there is going through a large city.  Pretty much a straight shot & traffic has never been what I would call heavy. 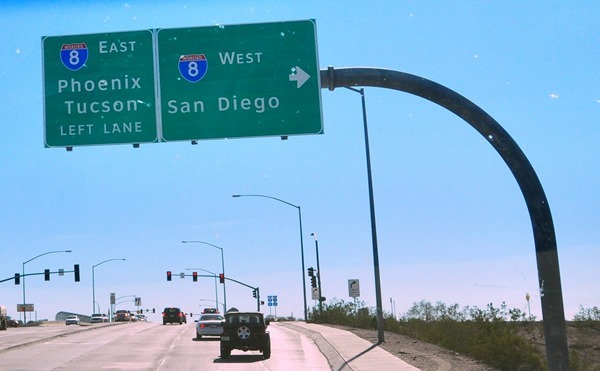 WE HEADED OFF WEST TOWARDS SAN DIEGO 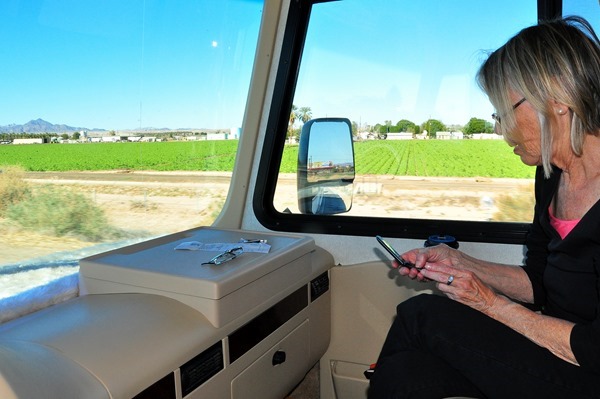 KELLY CHECKS HER BLACKBERRY FOR EMAILS 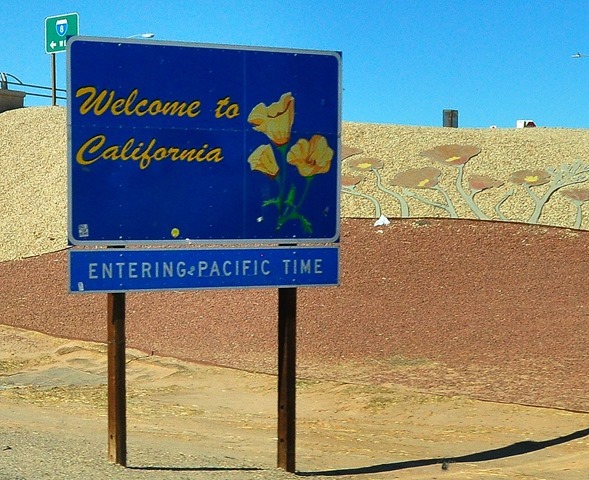 Our destination was Ogilby Road west of Yuma & we knew exactly where to go.  Again we have lots of great memories from this area.  There are other great boondocking spots north of Yuma around Mitri Lake, Imperial Dam, Martinez Lake but we just took a shine to the west side of Yuma right from the beginning years ago & feel at home here on quiet Ogilby Road.  Lots of wide open spaces & if you like to be far from the maddening crowds Ogilbe Road has lots of room for you.  And it’s only about a 20 minute drive into the Yuma Palms mall complex.  Now I’m not a mall crawler by any means but I do like this large mall complex & this is where the multi-plex theater is.  But oh dear we have several flies in the ointment already:((

OUR OGILBE ROAD SPOT FOR A COUPLE DAYS

Try as we did today we could not get our Shaw Satellite TV system to work.  We are usually able to find a satellite signal within minutes of setting up our dish but not so today.  We noticed a sizeable crack in our LMB & ‘IF’ that is the problem we could very well be without TV for the next two & a half months.  Only way we are going to know if it is the LMB is to hook it all back up in Congress & see if it works. 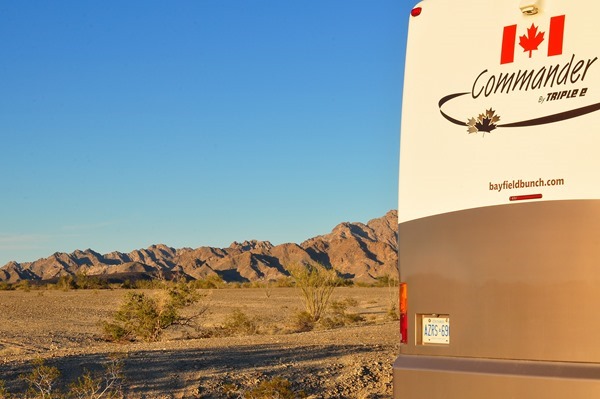 Also when we checked all the movies in Yuma tonight we only found 2 out of about a dozen we would be interested in.  ‘Star Wars’ for me & ‘The Danish Girl’ for Kelly.  We will probably do both movies Monday & I have a feeling we may be on the move again shortly…………….. 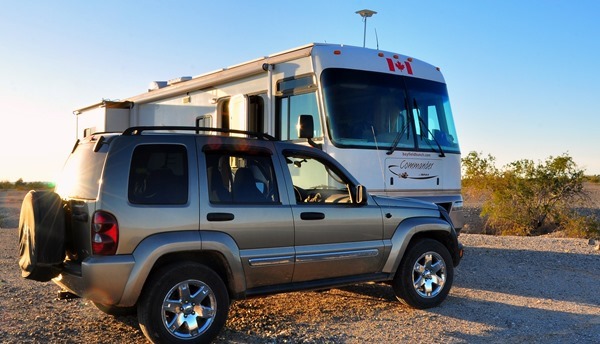