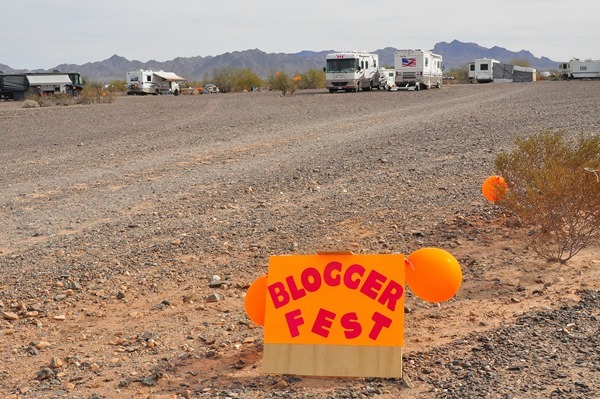 I struggled with myself all week over the decision on whether to go to Bloggerfest in Quartzsite or not.  Part of me wanted to go & part of of me didn’t.  Some folks have a fear of spiders, some may fear high places but with me it’s a fear of people or especially groups of people & that was the side of me that didn’t want to go.  But fortunately my other side won out & now sitting here at my computer tonight I can honestly say I was glad we went simply because of how much better I am feeling tonight.  And that better feeling came from confronting some of my fears head on today or in other words meeting some mighty nice new people & seeing old familiar friends again.  Holy Smokes you don’t think I’m turning into a people person do you??? 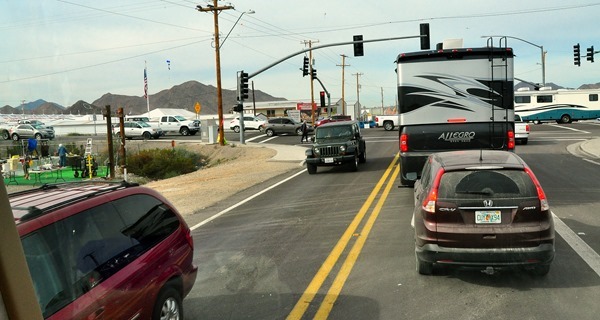 THIS IS A VIEW OF THE KOFA MOUNTAINS FROM TODAY’S BLOGGERFEST 2016 SITE….THE KOFA’S ARE MY FAVS

We had started loading up the rig a couple days ago with thoughts of stopping in Quartzsite for Bloggerfest then heading on down to Yuma.  This post by the way is coming to you from somewhere south of Quartzsite Arizona tonight & we’ll head out for Yuma Sunday morning. 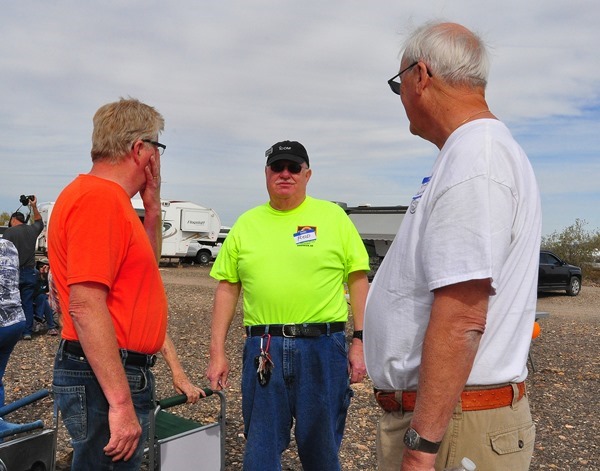 NEW TO THE RV LIFESTYLE IS ‘LORNE GREEN’ ON THE LEFT, THE ROOMBA MAN HIMSELF IN THE CENTER ‘RETIRED ROD’ & THAT’S ‘CROFT FROM BRITISH COLUMBIA ON THE RIGHT (BE SURE TO READ ROD’S ‘ROOMBA’ POST, IT’S A CLASSIC:))

PEOPLE ARE BEGINNING TO ARRIVE Rolled out of Congress this morning at 9 a.m. under cloudy skies.  Picked up some fuel & headed west on highway 71.  Hour & a half later we were at the Chevron in Quartzsite topping up our propane tank & twenty minutes after that we were at the Bloggerfest site talking to organizers George & Suzy from OUR AWESOME TRAVELS who I think did a fine job getting things together. 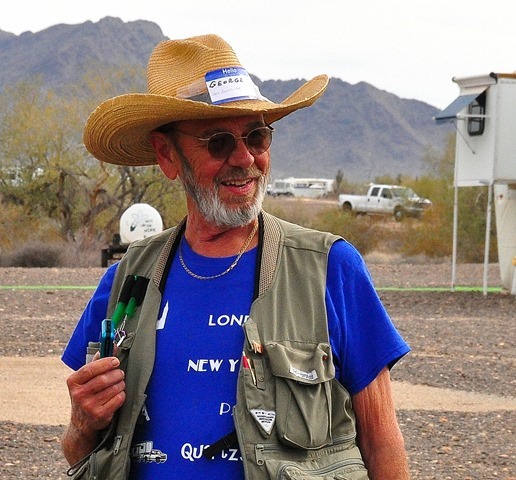 At an an hour & a half early today we were the first ones there unlike Bloggerfest 2015 when we arrived late.  And just as a year ago we were about the last ones to leave again.  And here’s the kicker, despite bringing two chairs to sit in I never once sat in my chair & Kelly only sat in hers for a few minutes at the beginning.  And we did the same darn thing last year.  In fact I think most people who brought chairs never sat in them.  It’s just one of those gatherings where people are constantly on the move walking around talking to each other.  Today was the longest time I have been in a continous upright standing position for a very, very, long time. 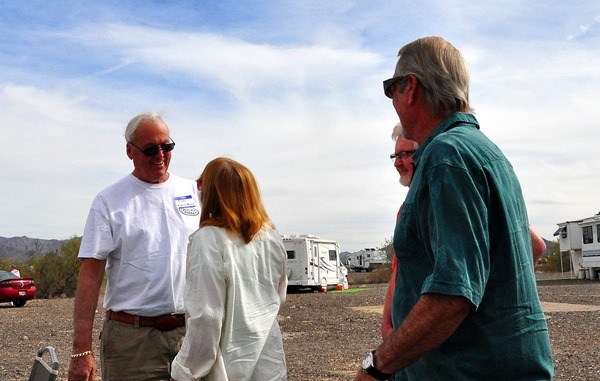 JEAN GETS TO MEET FELLOW BLOGGER CROFT FOR THE FIRST TIME 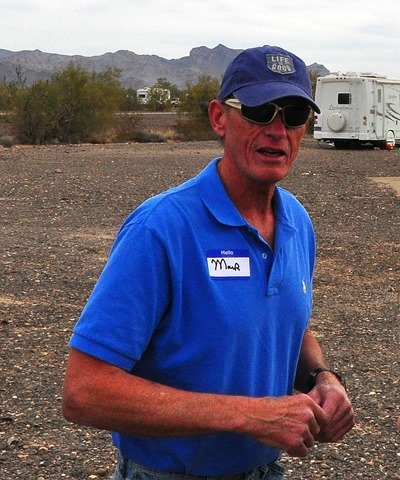 By 1 o’clock folks were rolling in & both Kelly & I felt there was a bigger turnout this year which which shows Bloggerfest in only it’s 2nd year is already growing.  Now I do have about 50 Bloggerfest photos from today so to keep it simple for myself I am going to post them in batches over the next few days & I’ll basically post them in the order they were taken.  I will name a few of the people I do know & although many of the group photos are similar you just may be able to find yourself in a few of them. 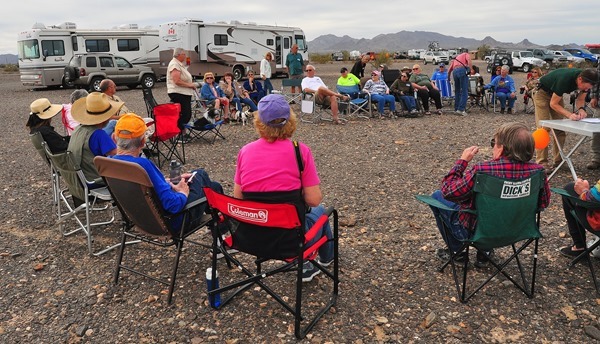 I will have more to say in the coming days about today’s Bloggerfest & some of the people I met today whether they be old or new friends.  Some of the conversations & things said to me I can already tell have impacted me in a positive way & to you people I thank you so much for your kind words:)) 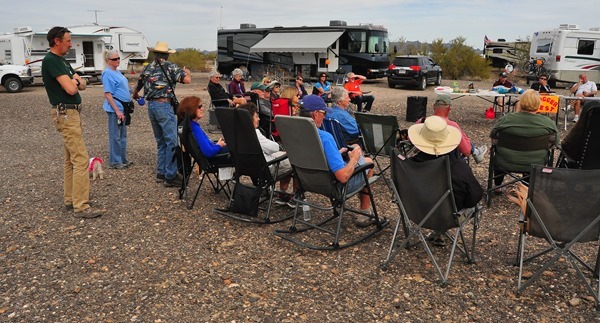 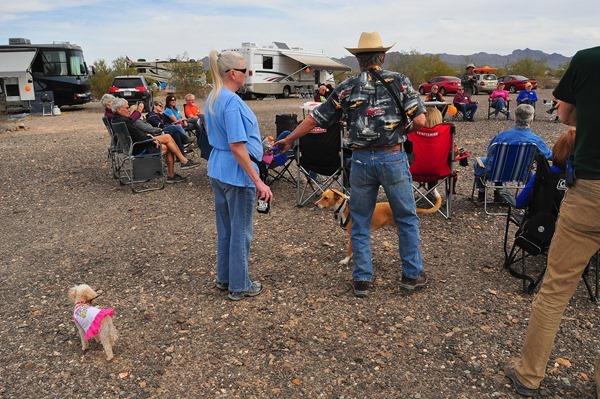 One of the reasons why we are headed to Yuma besides seeking some warmer weather is to simply catch ourselves some movies at the Yuma Palms Mall.  We just want to go & sit in some comforable theater seats & be entertained by some movies on big screens with big sound.  Just want to sit back, relax, & be entertained.  We rarely go to movies so this will be a nice change of pace for us. 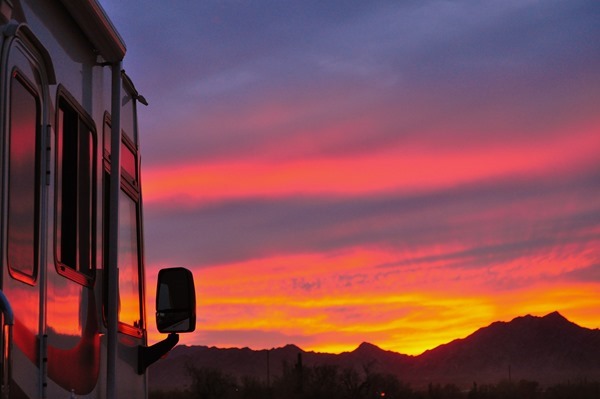 GROANER’S CORNER:(( Two morons stand on a cliff with their arms outstretched. One has some budgies lined up on each arm, the other has parrots lined up on his arms. After a couple of minutes, they both leap off the cliff and fall to the ground.  Laying next to each other in intensive care at the hospital, one moron says to the other, "I don't think much of this budgie jumping."
The other moron replies, "Yeah, I'm not too keen on this parrogliding either."