THIS POST IS COMING TO YOU FROM BORREGO SPRINGS CALIFORNIA:))

Imagine my surprise Thursday afternoon when Kelly suggested we head off to Borrego Springs California.  I'm usually the one pushing to go somewhere.  I asked her when we should go expecting her to say next week sometime & was again surprised when she said Friday which of course is today.  I think it was the first time ever once a decision was made to go somewhere in the RV that in less than 24 hours we were actually on the road.  We both did feel we were overdue for a much needed change of pace, some warmer air & some changing scenery. 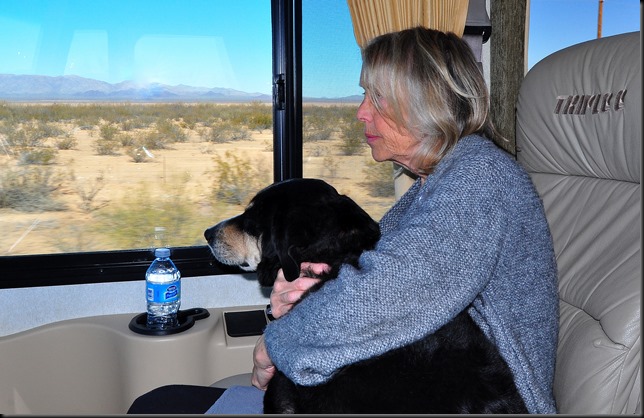 Not being in any kind of a hurry this morning we leisurely worked away at loading the rig & securing the house.  By 10:20 we were good to go so away we went.  Stopped at the Congress Garage to top up our propane tank & minutes later we were westbound on highway 71 with Borrego Springs California in our sights.  Knew it was only a 5 hour trek so we never hurried.  The drive from Congress to I-10 leading to Quartzsite is one of my favorite drives as the highway rolls, lazily across the desert floor without a lot of curves, serious grades, or mountainous climbs.  And the best part, very little traffic.  Just sat back & enjoyed this mornings sunny Arizona scenery rolling by.  What a great feeling to be on the road again going somewhere.  With each mile traveled the better I felt.   About 11:45 we were in Quartzsite for our customary McDonald's coffee stop.  Picked up some fuel & we were westbound out of Quartzsite heading for the California State line by 12:15. 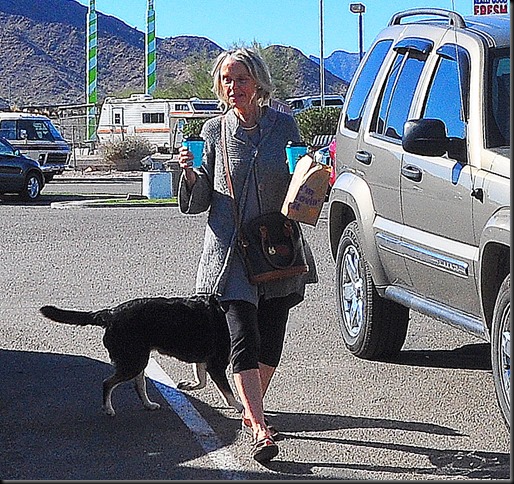 WESTBOUND ON I-10 BETWEEN QUARTZSITE ARIZONA & BLYTHE CALIFORNIA 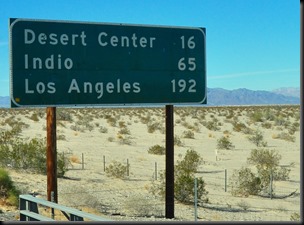 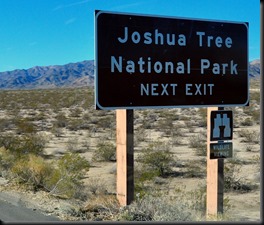 Interstate 10 seemed busier than usual but it was Friday afternoon & the last week-end before Christmas so maybe there were extra travelers on the road today.  No matter as we peeled off I-10 well east of Indio & took our favorite route through Box Canyon.  We have probably used this route a dozen times over the years coming & going to Borrego Springs or Slab City.  From I-10 it is a gradual but continous descent through the winding Canyon to the floor of California's Coachella Valley ending in the lush green farm lands just east of the town of Mecca at the North end of the Salton Sea. 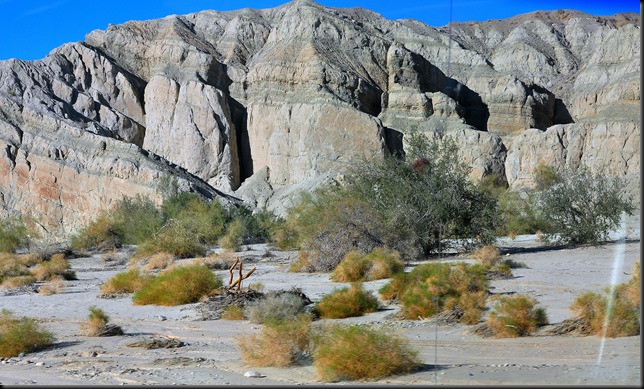 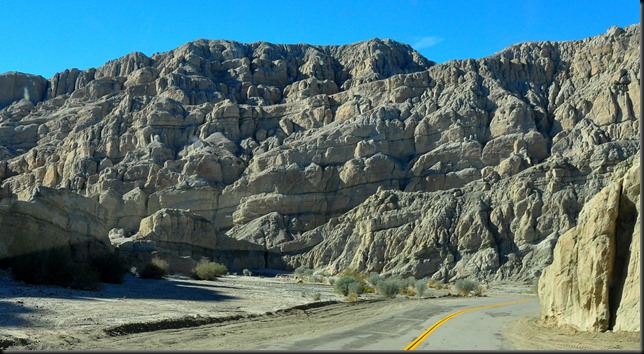 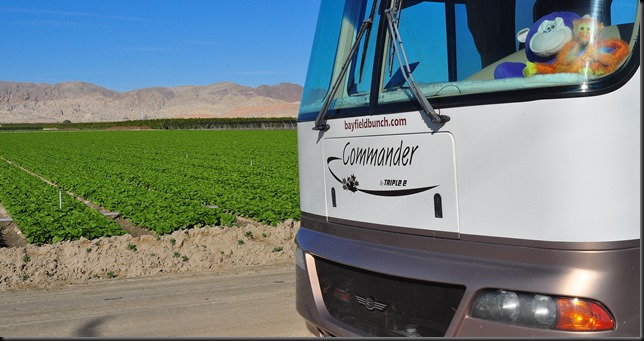 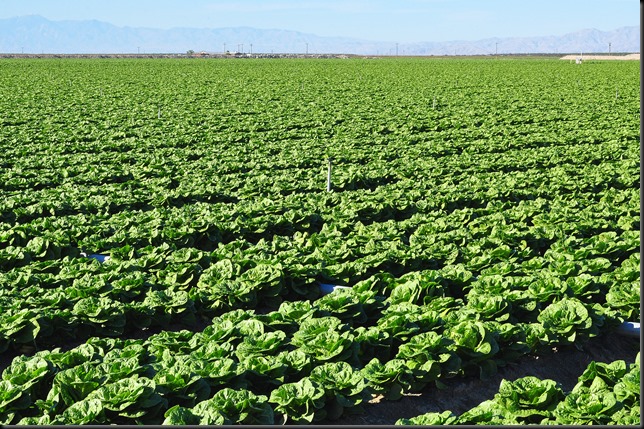 In Mecca we picked up highway 86 & headed south to Salton City.  At the big Arco Truck center we turned right onto S22 & 20 minutes later we descended into the Borrego Valley & our boondocking destination at the Clark Dry Lake Bed about 5 miles east of Borrego Springs.  Happy to say the rig ran flawlessly all the way with no chugging or loss of power.

HEADING WEST ON S22 ONLY MINUTES FROM OUR DESTINATION
After all the bits & bites of info we had been hearing about this favored boondocking site being in trouble we were not sure what awaited us but upon arriving at our favorite Rock House Road area we are happy to say our fears of finding a spot were instantly dispelled.  Although boondocking has been banned for the most part down in the flats east of Coyote Mountain there is still lots of room along Rock House Road & we lucked out to find 'the Oven' site with nobody at it.  We have boondocked at this spot 3 or 4 times over the years & knew we would have a good Verizon signal here.  A number of fellow RV folks well know this site for it's mud oven that was constructed here a number of years ago.  We never met the builders but former RV Bloggers Laurie & Odel knew them.  So if you guys are still reading I can tell you the Oven looks good & has withstood the test of time well.  And best of all it hasn't been vandalized. 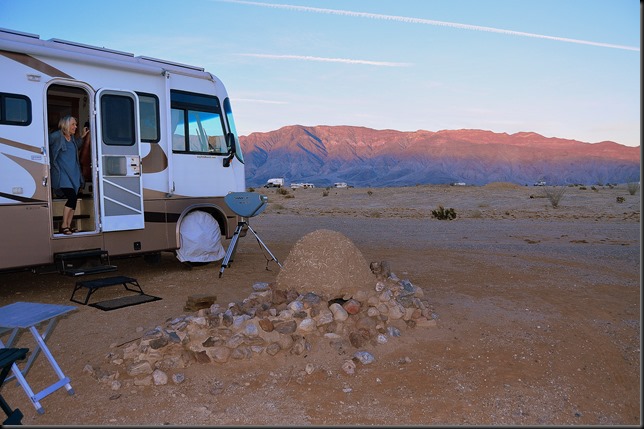 THE MUD OVEN ITSELF IS STILL IN GOOD SHAPE

I COUNTED 18 RIGS SCATTERED ABOUT 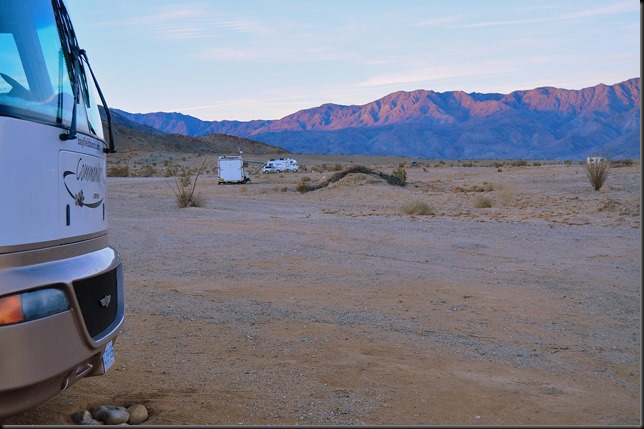 By the time we got the rig set up & the satellite TV dish in operation the sun was beginning to set.  Managed a few pics of the rig before darkness descended but in the morning I plan to head on up to the roof of the rig & take a few photos showing just where everyone is & is not parking.  In a nutshell I think all our worries & fears about not being allowed to boondock here anymore were much ado about nothing.  And we noticed about half a dozen rigs down at Peg Leg Smith's too.  Anyway, so far so good at the Clark Dry Lake Bed:)

Wished I could tell folks how to get through some of the new Open Live Writer bugs but we are still hit & miss here with it ourselves.  We did not have a clean install so are having problems.  We know the OLW people are aware of the bugs & are working on them.  I have no idea if my post will publish tonight or not but we think it has something to do with naming Picasa's Web Albums.  We also ran into a scheduling problem where the blog doesn't publish right away.  I really wished we could help with these bugs but as I said we are not understanding them either.  A few of my posts & test posts have published & some have not.  Have a look at this post from heyduke it might be of some help.  Whether this post will publish tonight or not I have no idea…..

GROANER'S CORNER:(( Shortly before Christmas, a business man was anxious to get home. The business trip had been grueling and he was not in a particularly good mood. The airport loudspeakers blared Christmas carols he was sick of hearing. He thought their decorations were tacky. The worst decoration, he thought, was the plastic mistletoe hung over the luggage scale.  Being in a grumpy mood, he said to the woman at the counter, "You know, even if I weren't married, I wouldn't kiss you."  "That's not what it's there for," said the attendant. "It's so you can kiss your luggage goodbye." Q: What was so good about the neurotic doll the girl was given for Christmas?
A: It was wound up already.

Santa goes up and down so many chimneys that he's thinking of getting a yearly flue shot?
A man went to his psychiatrist and said,
"What's wrong with me? I'm afraid of Santa."
The psychiatrist said, "You must be Claustrofobic