Heavy wind gusts caused us to pull both slides in Monday night but fortunately sometime after 11 those howling winds suddenly stopped just as quickly as the had earlier started.  With a high hazy cloud cover overhead holding Monday's warmer air down it did not feel cold early this morning when Pheebs & stepped out of the coach into the darkness.   While visibility was clear to the East at first light I could see a cloud bank up the canyon sitting on the ground West of the dry lake bed itself.  Borrego Springs is under a 'wind advisory' again tonight.

My posts are taking a long time to publish each night & I have to repeatedly go back into Open Live Writer's 'blog account' & go through a procedure to keep it going after frequently receiving the same #403 error code we've been getting for over a week now.  The 'scheduling' conflict seems to have been resolved & I'm hoping the folks at OLW will soon have a fix for that 403 problem.  Now having said all that......I am using 'Blogger' to publish this post tonight. *!!@#!*% 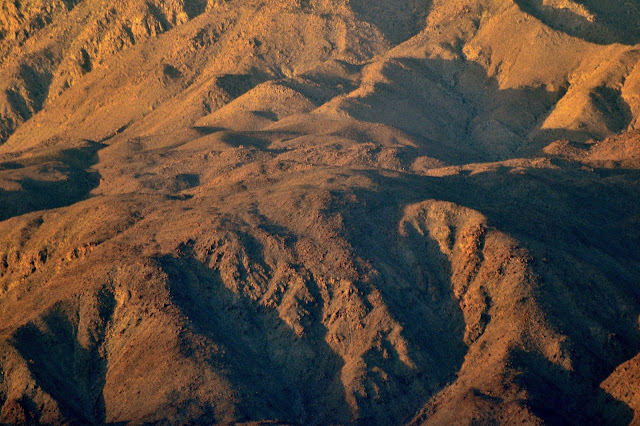 Noticed a couple fellow RV'ers have decided to sell their Class A Motorhomes.  We can personally vouch for the first coach after having been in it & know the owners.  This well maintained Motorhome is luxury all the way & in impeccable condition.  Mike & Pat McFall are selling their top of the line Foretravel & Mike has this to say about it......"OK Everybody, The word is out: Our Great Motorhome if up FOR SALE ! It is a 2003 Foretravel 40' Tag ax. 2 slides, 450 hp Cumin's, 87K miles in excellent shape.. In about 2 months I will consign it to MOT to sell on their lot in Nac.,TX. If your interested and want to save consignment fee's, give us a call.(PM) Price $139,900.00  I hate to see it go, but life moves on....The second Class A RV for sale is in Texas I believe & belongs to Dizzy Dick over at Dizzy's Wanderings & Wonderings  He has several back to back posts with more info.  And just noticed Jim & Dee over at Tumbleweed have decided to hang up the keys as well & have a 2010 Carriage Cameo 36FWS (full wall slide) and 2007 GMC Sierra Classic 3500 diesel dually for sale way over there in that Florida place.

Monday's westerly winds ushered in a Tuesday cloud cover over night & those clouds were instrumental in holding Borrego Valley's warm air close to the ground giving us a short sleeve day.  A morning walk down Rock House Road gave us a little better idea where the boon-docking parameters are now (well sort of)& for the most part we think folks are sticking pretty close to those boundaries......wherever they are.  Would be interesting over the next couple weeks when Snow Birds flock into this area to see how State Park Rangers are going to enforce the off limits areas as I'm sure a lot of folks will not be aware of the new rules now in force as to where people can camp.

With a wind advisory in effect we didn't plan to stray too far so headed off into Borrego Springs to see if we could track down some breakfast.  We spotted the Red Ocotillo's new location just off Christmas Circle so thought we would give it a whirl.  We ate one time in their original Quonset hut location years ago but one look at the menu told us breakfast would be more money than we wanted to spend & with another table close by having a crying baby we exited the building. A 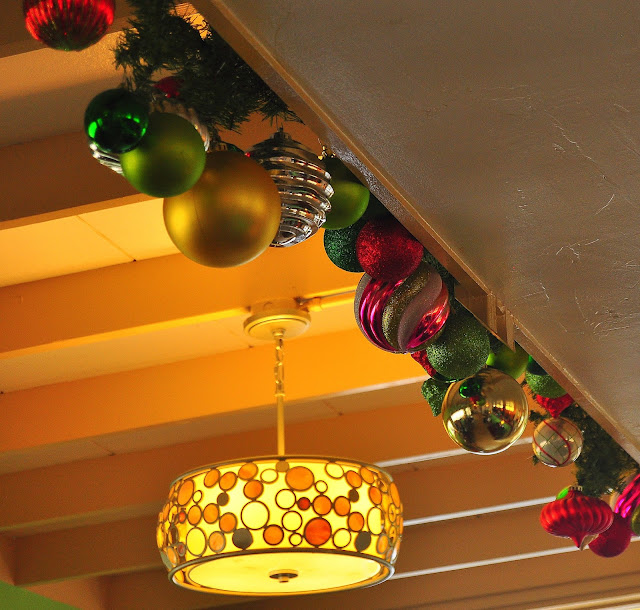 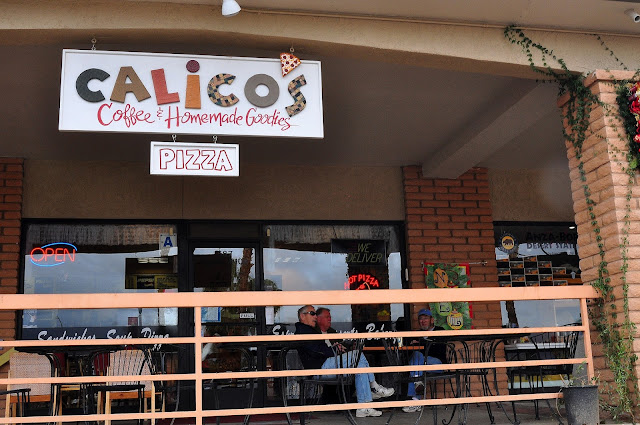 Had been a whole 2 days since Kelly had been in the Frugal Coyote Thrift Store & was worried she might have missed something so off we went across the street.  Pheebs & I stayed in the Jeep.  Kelly came back with a wooden bowl like the one I had bought Saturday & she also had found an Elephant.  Well it was a small Elephant at least & it was porcelain.  Think it was something one could use as a creamer or something. 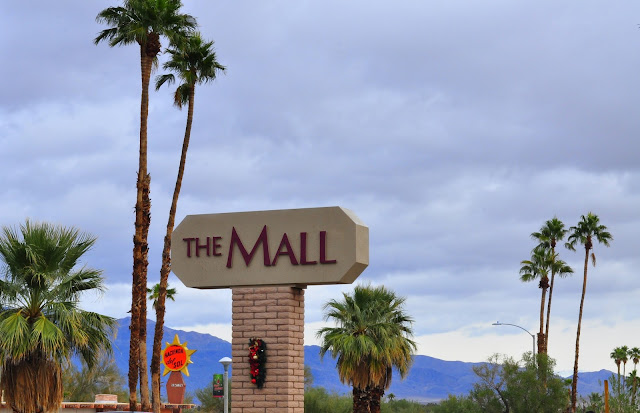 Heading back to the rig I turned off on the dump road intending to show Kelly a nice sand dune area where I had been to with an early morning photo class a few years ago but the area had changed & I could not find the road.  Also about this time the Borrego winds suddenly came roaring down out of the canyons blowing up clouds of sand & drifting it over the roadway just like a good old Canadian snow storm.  Turning around we decided to head back & slide down Rock House Road to the Dry Lake Bed hoping it wouldn't be as windy down there.  And it wasn't.

Passed our rig on the way & everything looked fine there.  We kept an eye out for IVAN down near the lake bed even though we knew he had already left the area last week.  Figured he might have misplaced himself & wandered on back somehow. No sign of him so I guess he must have somehow known where he was going before he finally got to wherever he thought it was .  Last we heard he was south of Joshua Tree National Park & who knows he might even be somewhere in northern Alberta by now wondering where it was he made the wrong turn.

We again marveled at our warm day while strolling around on the flat hard baked sand of the dry lake bed.  Cracks in the sandy mud tell us this lake bottom still catches it's fair share of water in the summer Monsoons.  After a short exploratory walk around we were soon back at the rig where we stayed for the rest of the day.  In the morning we may drive way back into Henderson Canyon on the other side of Coyote Mountain or head off south of Ocotillo Wells to the Fish Creek area where the wind caves are.  Last time there Pheebs & I hiked up to the caves ourselves while Kelly remained in the Wrangler because of a sore ankle.  Four wheel drive is needed to get back into that area because of the sandy wash one has to follow.  We'll see which way the wind blows us Wednesday morning. 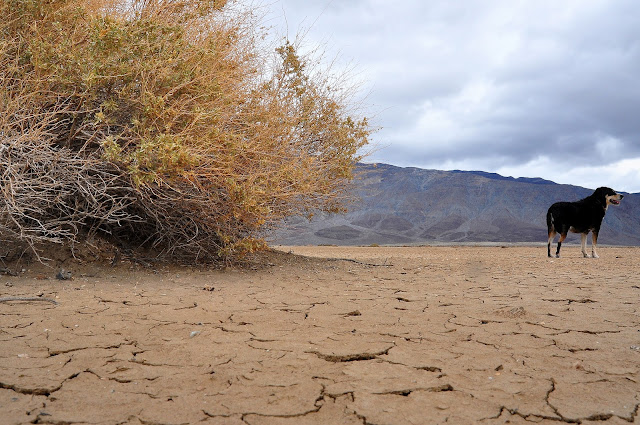 Been here 4 days now & still have not got around to see anyone.  We think Stillhowlyntravels is out here somewhere & I think we've finally figured out where Nan & John from Trippin With The Talleys are.  Straight out ahead of us about half a mile or so.  Update::: Nan dropped over to say hello tonight around 5.  Must say I'm a little surprised at seeing more rigs pulling out than pulling in.  Our closest neighbors from Nova Scotia rolled out this morning for a first time experience in Mexico.  Said they really liked it here near Borrego Springs & may just return on their way back through.  Borrego Springs has that kind of effect on RV'ers.  It just makes them want to keep coming back.  We sure know the feeling............... 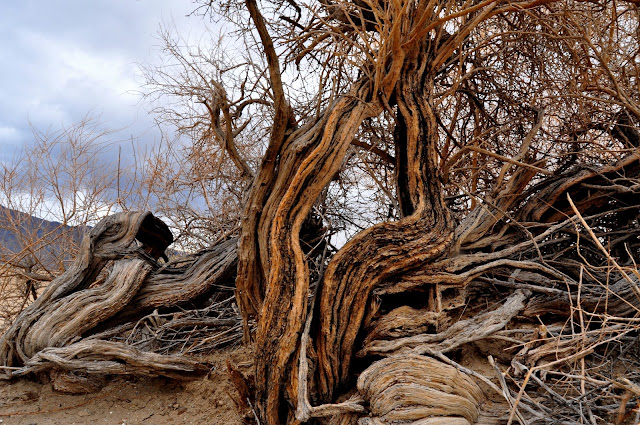 Q: What's a good holiday tip?
A: Never catch snowflakes with your tongue until all the birds have gone south for the winter.