“Hate to tell you but it’s snowing”.  Those were Kelly’s first words at 6:15 this morning as she stepped out onto our front porch for a look see after we had heard rain on the roof earlier.  Yes we are in Arizona & yes it does snow in certain parts of Arizona most every winter.  An email this morning from Canadian neighbors Don & Barb saying it was 85F & humid in Florida & Don was about ready to head home for some cooler Canadian temperatures & snow.
As dawn broke I was kinda hoping to see some Christmasy snow but alas it all seemed to have fallen on the Jeep with nothing on the ground aside from a small barely visible skiff here & there.  But not to worry, I knew where there would be snow & I knew it was only a 10 minute drive from house.


By 9 o’clock Pheebs & I were out the door heading for the nearby Weaver Mountains.  I could see a light dusting of snow high up on the mountain side & had my fingers crossed there would be more as we began our climb up the Yarnell Hill.  From having driven many a winter in the North I was alerted immediately to the shadowy sections of the highway knowing full well ‘black ice’ could be lurking there.  Slipped Libby into 4-wheel drive just in case & made it a point not to hurry.  One does not want to make a mistake on a curvy iced up mountain road.  And besides it was my first experience with a 4-wheel drive vehicle on a slippery surface.


Wasn’t long & I could see & hear road ice crunching under the tires.  Paid particular attention to the shadowed curves as we steadily approached the top rounding one tight curve after another.  Did pull over for one photo stop along the way & not long after we were at the top & into the picturesque little village of Yarnell.  And yes the ground was covered with an inch or so of snow.  Plows were busy scraping the road & salting.  WHAT!!!!  Awwww nuts I just didn’t think about salt on the road.  Road salt is the absolute scourge of any vehicle & I well know the rust damage it causes.  Drove in the stuff for years.  Oh well I was there to find some cheery Christmasy snow photos & not to worry about the ravages of salty roads.


It was a mixture of cloud &sun I found myself in & with some of the houses & business buildings being painted in my favorite south-west colors I was able to find a few nice settings tucked away on the tiny snow laced sleepy streets.  I think I may very well have been the only one up & about in the whole town........Because I took so many photos in Yarnell today I am going to have to space them out over the next few posts.  Tonight's photos will concentrate on a few snowy homes in Yarnell. 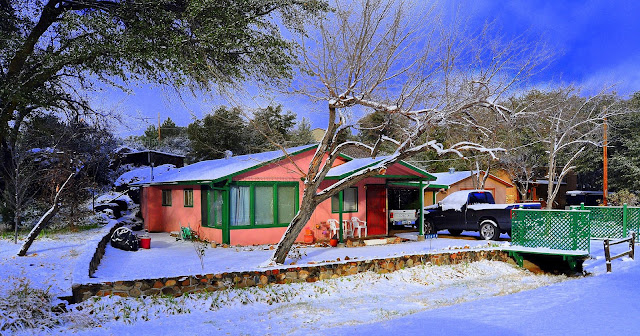 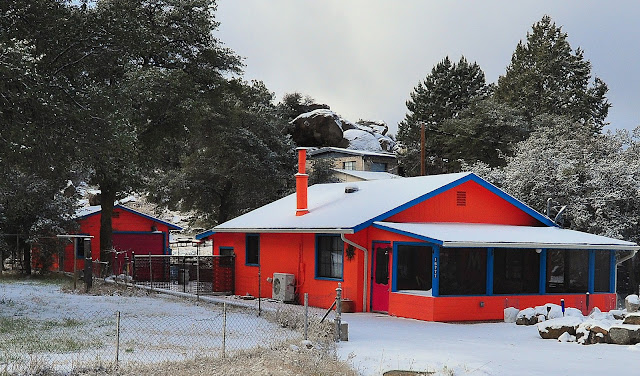 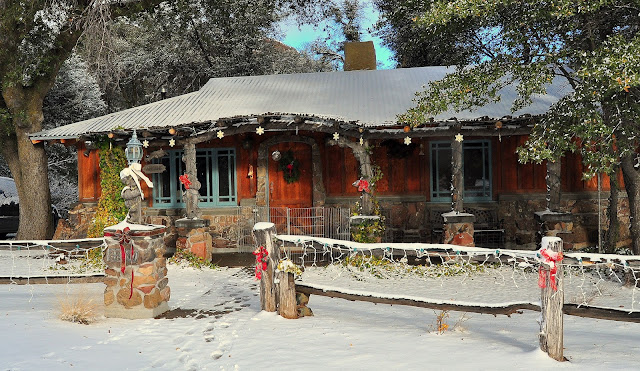 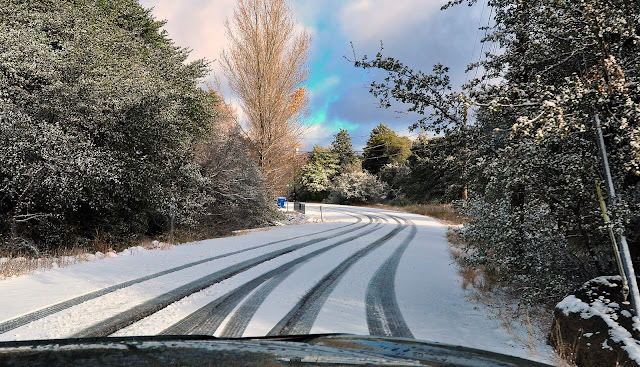 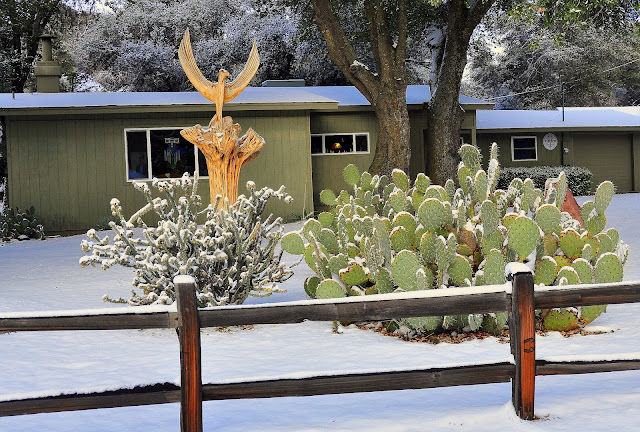 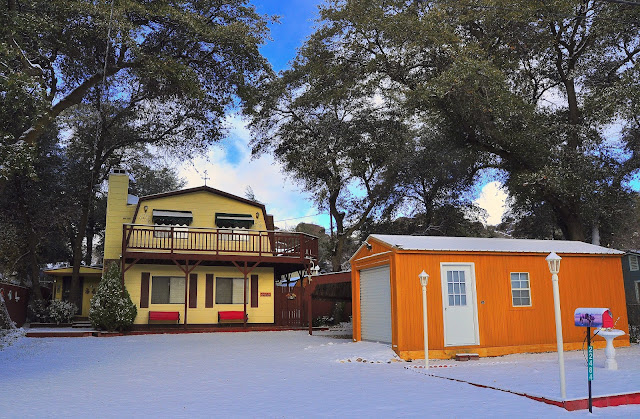 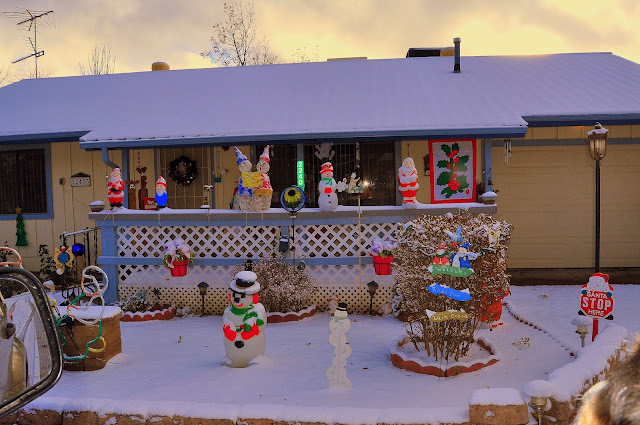 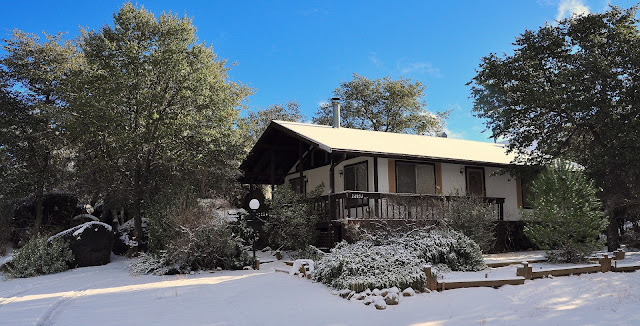 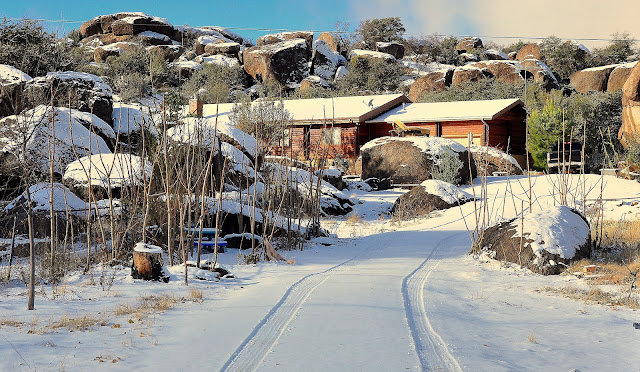 By the time we were ready to head back on down the Yarnell Hill the roads were bare pavement with the warm morning Sun having worked it’s magic.  Couple photo stops on the way down & we were soon once again on the floor of the Sonoran Desert.  We were at the point where the desert breeze meets the mountain air.  Our lovely Christmas scenery was behind us & were we to return back up to Yarnell in a couple hours we would probably have found all the nice Christmas snow already melted.


First thing I did when we arrived home was to thoroughly hose down the Jeep including wheel wells
& undercarriage.  From there it was into the house with doors closed & heaters going.  No idea what the temperature was today but with the wind chill factor it was definitely an inside day.  At the time of posting tonight our skies are clearing so fingers are again crossed for a sunny & warmer Tuesday.


GROANER’S CORNER:((  One Christmas, Joe and Peter built a skating rink in the middle of a field. A shepherd leading his flock decided to take a shortcut across the rink. The sheep, however, were afraid of the ice and wouldn't cross it. Desperate, the shepherd began tugging them to the other side.  'Look at that, 'remarked Peter to Joe, 'That guy is trying to pull the wool over our ice!'

Q. What do you get if you cross Santa with a detective ?
A. Santa Clues!

Q: Why does Santa Claus go down the chimney on Christmas Eve?
A: Because it " soots " him!

Q. What happened when Joe ate the Christmas decorations?
A. He came down with tinsel-itis.