SPOTTED SOME COWBOYS IN THE DESERT TODAY 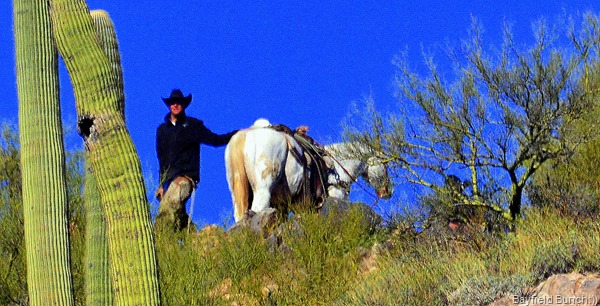 My first clue into how cold it was overnight was a thin skim of ice on our birdbath.  Second indication was a thicker layer of ice on an outside water bucket.  I’m afraid our electricity bill for the past few days may be a bit staggering with the amount of time we have had to run our big baseboard heaters plus a couple smaller heaters.  Rumor has it we are in for a warm up Wednesday so sure hope that is so. 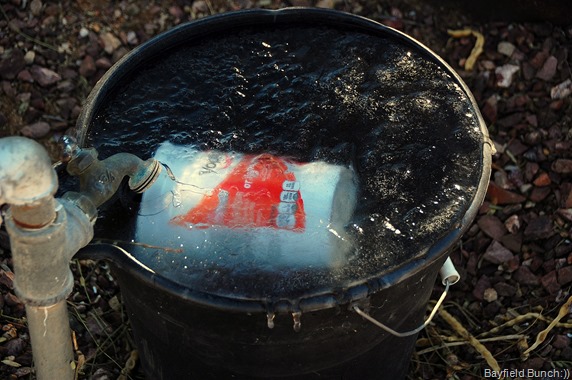 A COATING OF ICE IN OUR WATER BUCKET

Pheebs & I drove ourselves out into the desert behind our house this morning to a large Saguaro & rock strewn hill.  Rather than climb the hill like we did last year I figured it would make a good walk to hike all the way around it’s base.  Although a cool morning it was a great temperature for desert hiking. 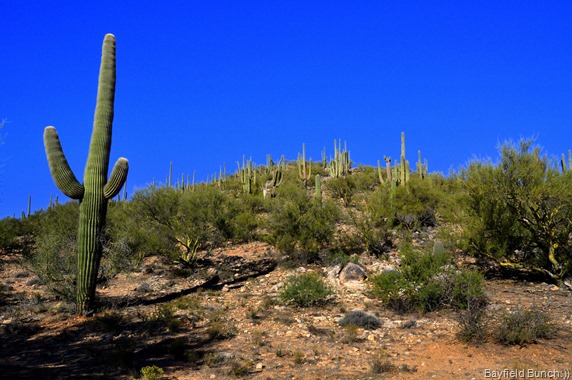 DECIDED TO WALK AROUND THE BASE OF THIS SAGUARO LADEN HILL 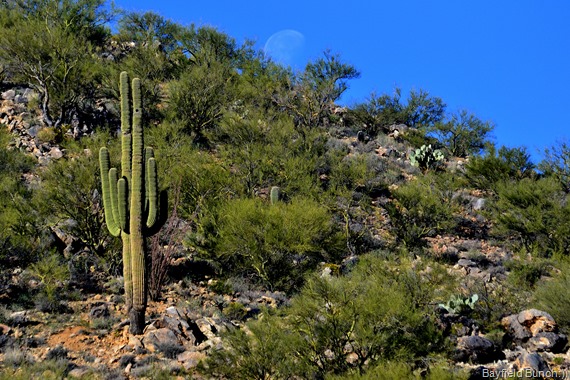 A FAINT SETTING MOON OVER THE RIDGE & AMONGST THE SAGUAROS 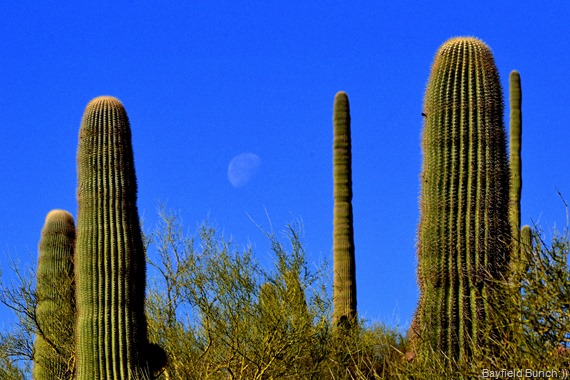 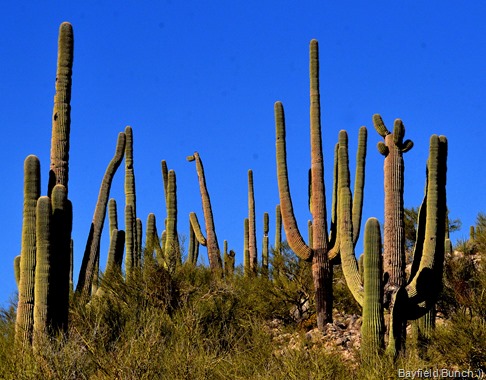 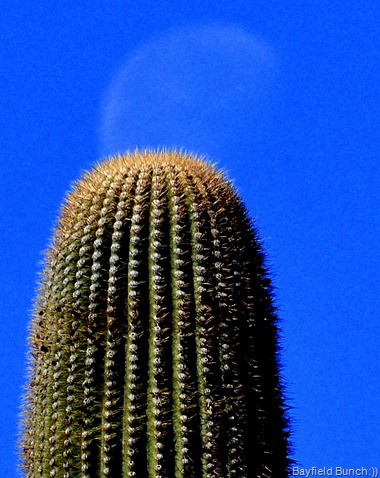 Hadn’t gone far when while taking some Saguaro Cactus photos I became aware of a distant talking voice somewhere.  I quickly traced the voice to the top of the hill & saw a far off cowboy atop a white horse cresting the hill’s ridge from the other side.  I quickly zeroed in on him with my 300mm lens & noticed his hand up to the side of his head.  No wonder I had heard a loud voice, he was talking on his cell phone. Seconds later another cowboy appeared walking up behind the fella on the white horse.  Had I not had my telephoto lens I probably would not have noticed the 2nd guy.  Then another cowboy appeared from the right. 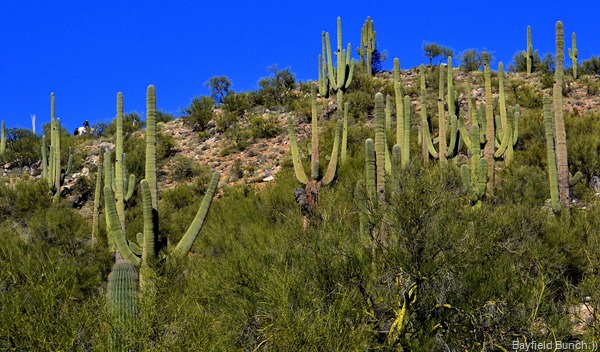 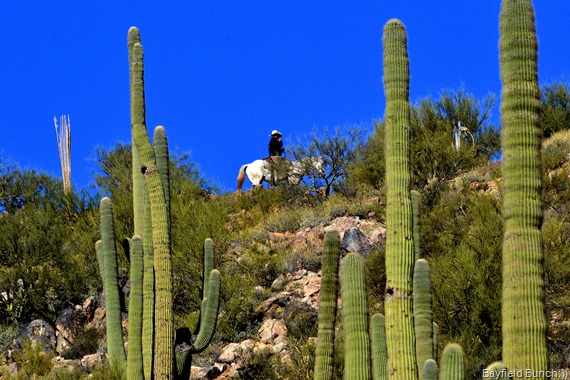 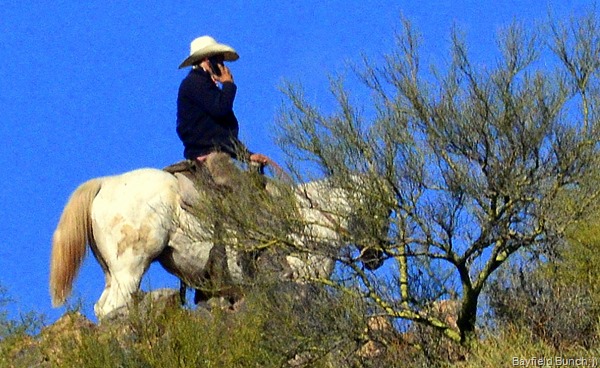 THIS MODERN COWBOY IS ON HIS CELL PHONE 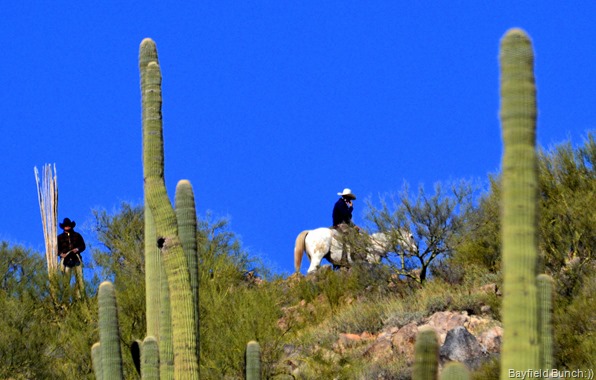 A SECOND COWBOY APPEARS FROM THE LEFT 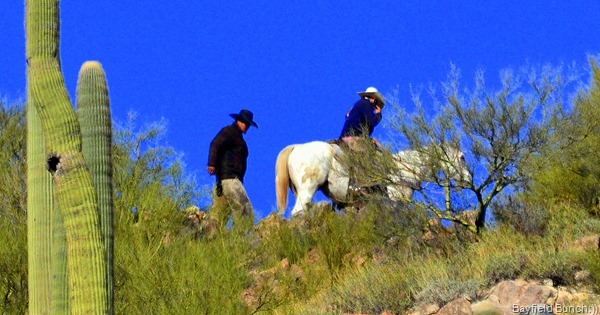 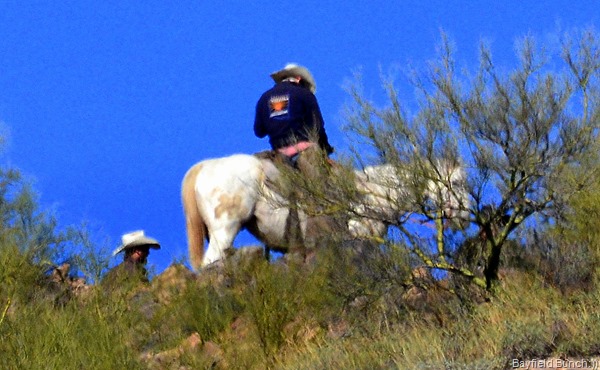 AND THEN A 3RD COWBOY

While this was going on I could hear cattle close by to my left somewhere so wondered if maybe these fellas were Ranchers out checking on their free range cattle.  Thought also occurred to me they could be hunters but for some reason I didn’t think so.  Quickly checking behind me I knew they couldn’t see me from their higher angle as I was standing in the dark shade of a Palo Verde tree.  Then I saw a third & forth cowboy & by this time I could hear voices & laughter drifting across the mornings still desert air.

MAYBE THE BOYS WERE TAKING A BREAK 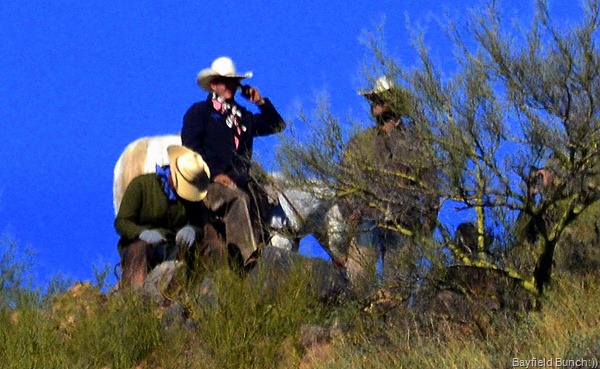 I FIGURE THE FELLA ON THE PHONE HAS CALLED SOMEONE ASKING FOR DIRECTIONS WHILE THE FELLA SITTING WITH HIS HEAD DOWN IS THINKING, “AWW GEEZZ LEFTY YA REALLY GOT US LOST THIS TIME” 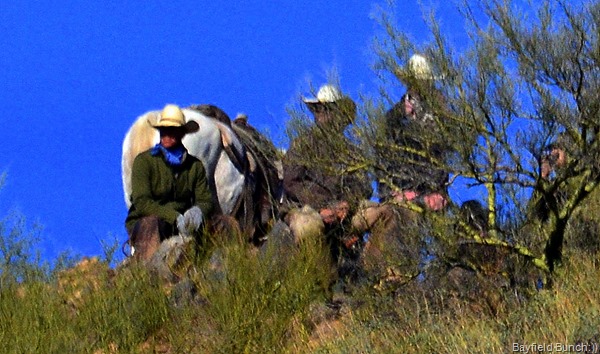 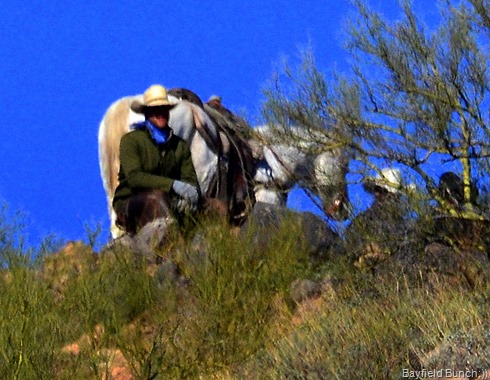 We have seen hunters up on this hill before & because there could be a chance that’s what these Cowboys could be I decided to just ease off back into the Mesquite & make our way back around the other side of the hill out of sight.  Didn’t want to take a chance moving through the brush any further in the direction we were going because I know hunter’s with binoculars sit up on this hill with high powered rifles & pick off deer on the valley floor below. 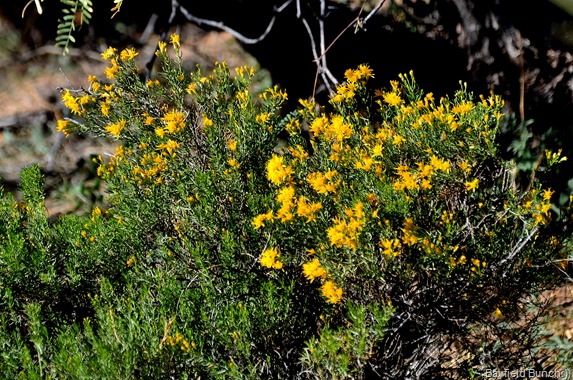 ALWAYS SEEMS TO BE SOMETHING BLOOMING IN THE SONORAN DESERT 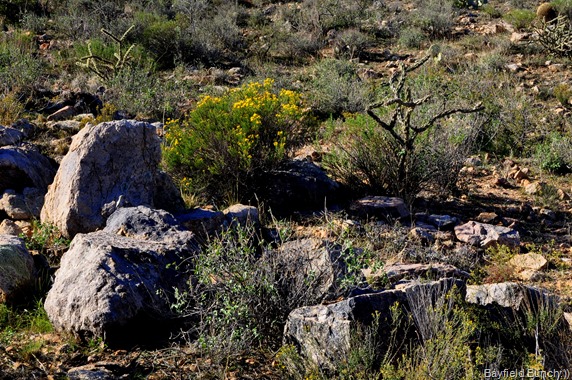 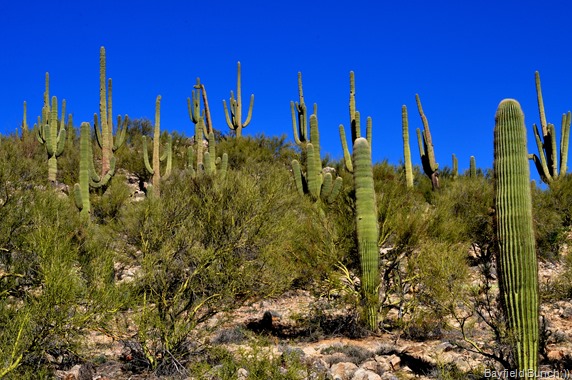 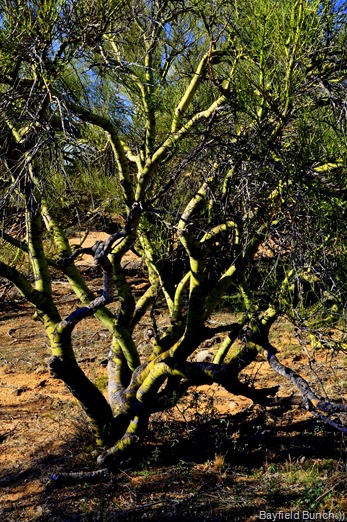 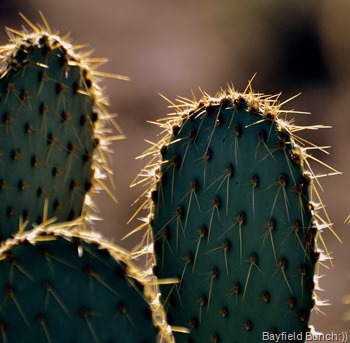 Decided to climb a bit higher on the hill for a better view as we made our way around in a westerly direction.   Wasn’t long & I heard voices again.  Easing ahead I caught sight of the same fellas but this time I could see a couple brown horses as well.  The Cowboys still a long way off were standing with their backs to us & I realized then that we had inadvertently outflanked them.  Again Pheebs & I turned around & this time headed back down the hill to the Jeep.  And that was the last we saw of the Cowboys & their horses atop Saguaro Hill.  Ten minutes later we were back home & it wasn’t quite 11 a.m. yet.

WE OUTFLANKED THE COWBOYS 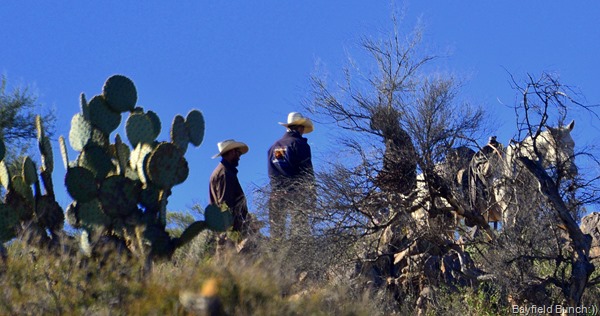 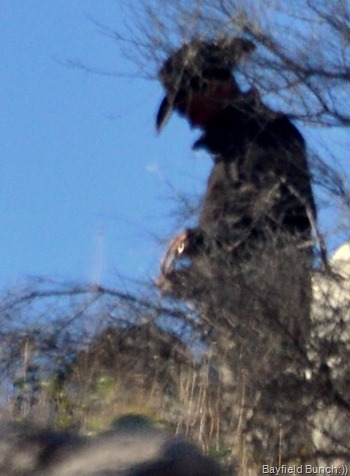 I FIGURE THIS FELLA IS EITHER DIALING A NUMBER ON HIS CELL PHONE, LOADING HIS 6 SHOOTER OR ROLLING A SMOKE >>>>>>>

I’m still sleeping in my recliner every night.  Did try my totally comfortable bed for 2 nights after we arrived in Congress nearly a month ago but although I did not have any Vertigo problems I just tossed & turned from side to side & that does not make for a good night’s sleep.  In my recliner I can’t toss & turn so I’m actually sleeping much better.  I always figured if I could get a better night’s sleep I wouldn’t end up being so cranky during the day.  Well I’m here to tell ya that theory went right out the window.  Although I’m sleeping much better I’m still as grouchy as ever:((  If they ever make a movie entitled, ‘Grouchy Old Men’ I’m gonna audition for the part!! 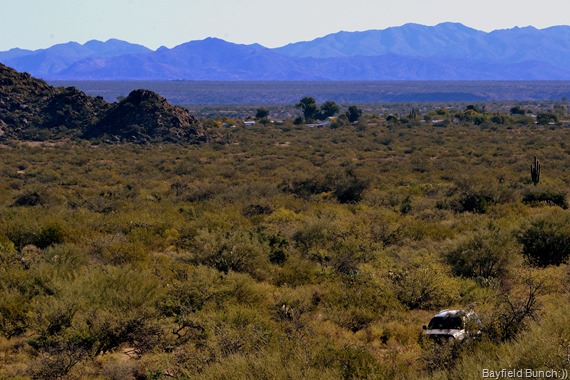 And just a wee word of thanks to everyone again for hanging in there over the years & giving me the motivation most every day to enjoy my hobbies of travel, photography, & writing.  And also for just being darn good listeners:)) 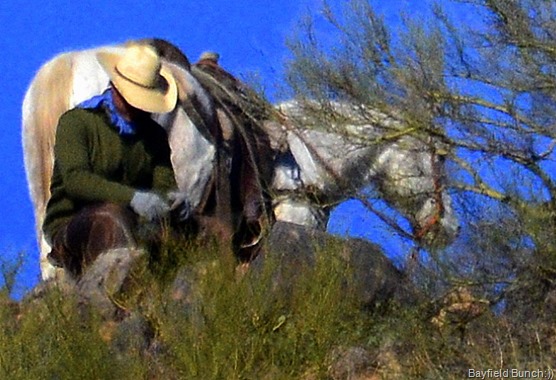 GROANER’S CORNER:(( There was once a snail who was sick and tired of his reputation for being so slow. He decided to get some fast wheels to make up the difference. After shopping around a while, he decided that the Datson 240-Z was the car to get. So the snail goes to the nearest Datsun dealer and says he wants to buy the 240-Z, but he wants it repainted "240-S".   The dealer asks, "Why 'S'?"  The snail replies, "'S' stands for snail. I want everybody who sees me roaring past to know who's driving."  Well, the dealer doesn't want to lose the unique opportunity to sell a car to a snail, so he agrees to have the car repainted for a small fee.  The snail gets his new car and spent the rest of his days roaring happily down the highway at top speed. And whenever anyone would see him zooming by, they'd say "Wow! Look at that S-car go!"