PHEEBS & I TAKE LIBBY OUT FOR HER FIRST DESERT RUN 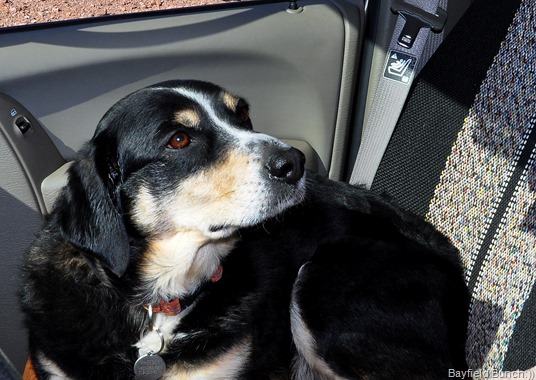 Running low on cranberry juice, oatmeal, & milk plus greatly needing a change of pace & scenery Pheebs & I were out the door & into the Jeep before 9 this morning taking a slight circuitous route to Wickenburg.  Took highway 71 to 93 & slipped into the Burg of Wicken that-a-away.

Grabbed up all my stuff in short order & was back out to the Jeep in less than 10 minutes.  Don’t know what I was thinking when I decided to get myself a Starbucks coffee on the way out of Safeway.  I’ve never liked their coffee & this morning was no exception.  I asked for the mildest coffee they had.  Ya right!!  It still tasted burnt to me.  No wonder they call it ‘Charbucks’.  And would you believe Pheebs had again turned on the Jeep’s 4-way flashers.  Yep she did & Libby was sitting their flashing again!!  When Pheebs stands in either front seat looking out the side windows I figure her powerful wagging tale whaps right into the dash where that flasher button is resulting in her turning the flashers on.  Luckily it only happens when she sees us/me coming & begins to wag her tail furiously. 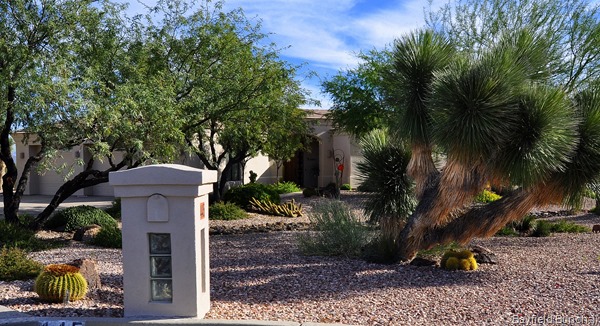 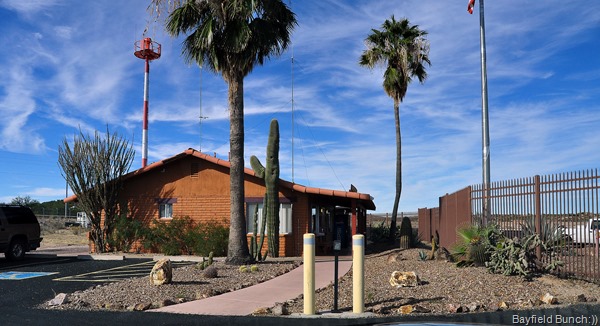 From the Safeway store we rolled west out of Wickenburg along highway 60 in the direction of a dusty little town called Aquila.  Rolled through one of Wickenburg’s suburbs to look at the houses & also drove in to Wickenburg’s airport to have a look at that as well.  From there we just kept heading west while I kept an eye out for some desert roads heading off in the direction of Congress.  We did find one & decided to take it in hopes it might link up with highway 71 somewhere.  It didn’t. 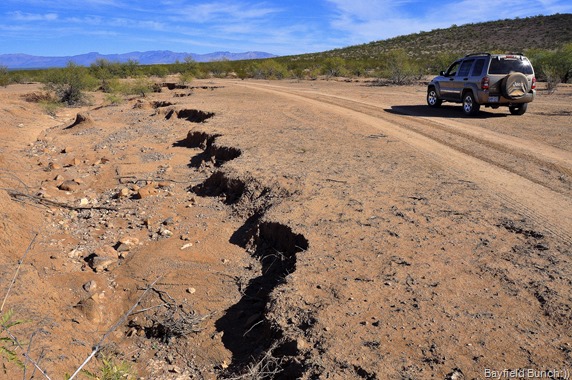 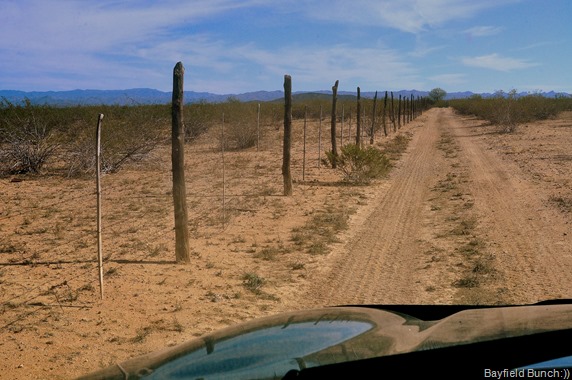 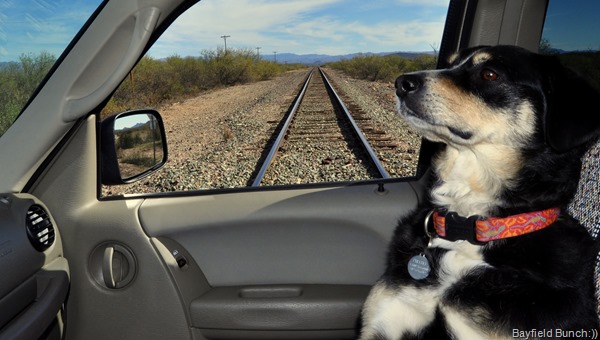 It was Libby’s first drive in the desert & she did just fine on the moderately bumpy road.  Noticed right away the Liberty handled the ruts & bumps much smoother than the Wrangler did & I suspect the slightly longer wheelbase & probably different suspension had something to do with that.  The dusty road finally led us to a ranch or something about a couple miles in & just kind of wandered off into the Mesquite from there so we turned around & bounced our way back to the highway & continued on to Aguila.  Hadn’t driven this piece of road before except the section immediately west of Wickenburg when a couple seasons ago Kelly, Pheebs & I traveled out to find a Jeep road leading to the Wickenburg Massacre site………………. THE MORNING WE SEARCHED FOR & FOUND THE WICKENBURG MASSACRE SITE 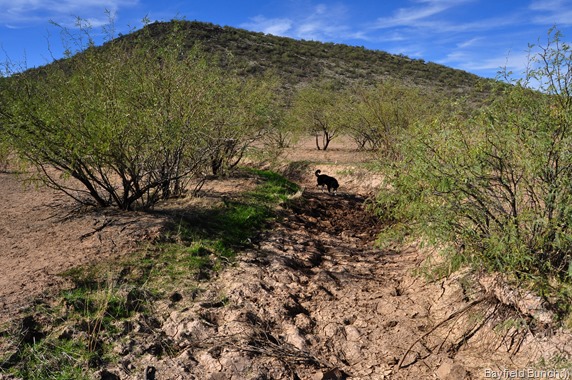 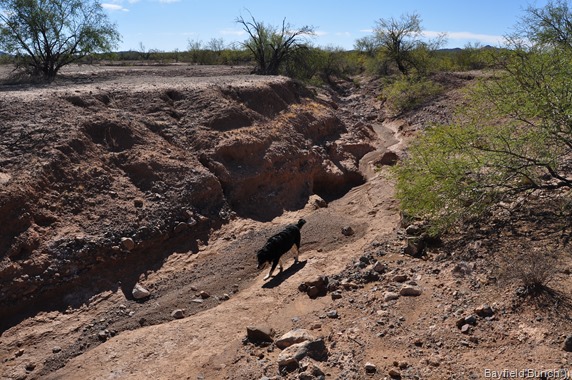 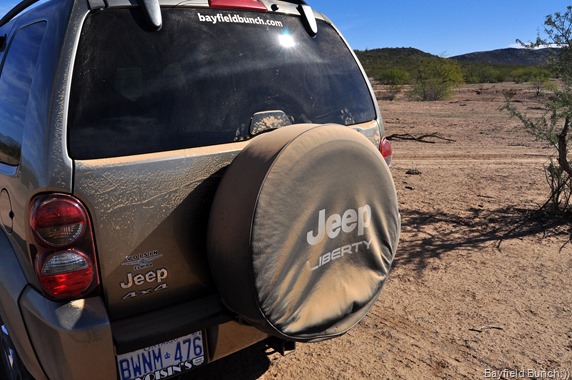 At Aguila we hung a right turn back onto highway 71 & leisurely drove ourselves back to Congress with windows down just enjoying the flat desert floor & surrounding mountains & tall hills along the way.  So nice for Pheebs & I to be out on another exploring Jeep ride again just like we so often do back in Ontario.  Next time out I think we’ll head back to Aguila & have us a closer look around that Eagles Eye area.  Seems to me I read somebody’s blog about driving or hiking up to that spot a year or two ago. 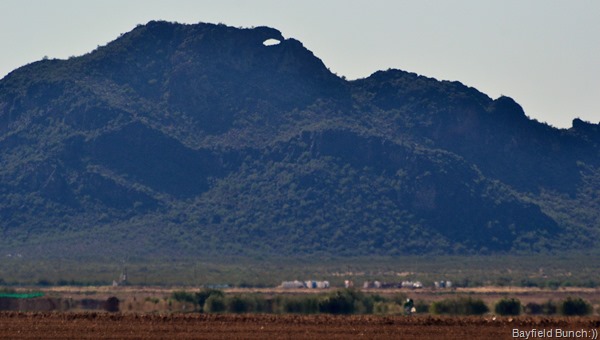 A LOT OF AGRICULTURAL LAND AROUND AQUILA

NO IDEA WHAT KIND OF MACHINERY THESE THINGS ARE 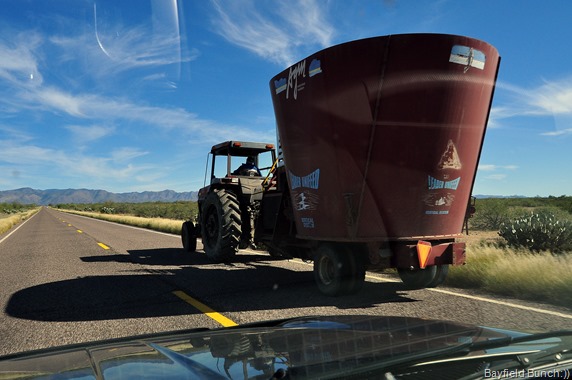 This morning’s drive with Pheebs told me this is something we are going to have to do more of & just like at home in Bayfield it breaks up my week from having too many days together doing too much of the same thing all the time.  I thought maybe as I aged this restlessness within would tone down a bit but it seems the older I get the more restless I become.  Restlessness can be a good thing if one can find a constructive or creative outlet for it.  If not it can make for long bouts of seemingly unceasing uneasiness.

THIS JUST CAME IN FROM NAN TALLEY REGARDING BORREGO SPRINGS…… Al, really bad news ! All land around Borrego Springs is now not available for boondocking! Do you have any suggestions ???? 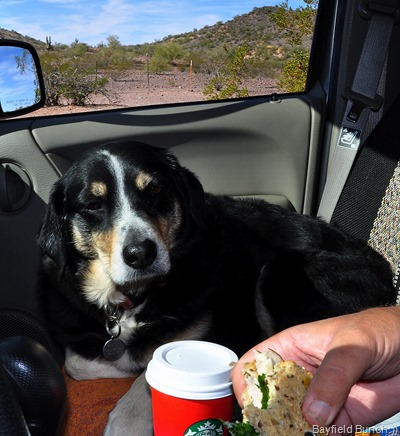 GROANER’S CORNER:(( A mother was anxiously awaiting her daughter's plane. The daughter had just come back from a tropical island where she was trying to find love and adventure.  As the daughter was exiting the plane, the mother noticed a man directly behind her. He was dressed in feathers with exotic markings all over his body and was carrying a shrunken head.  The daughter introduced this man as her new husband.  The mother gasped in disbelief and disappointment and screamed, "I said for you to marry a RICH doctor not a WITCH doctor!!!!"