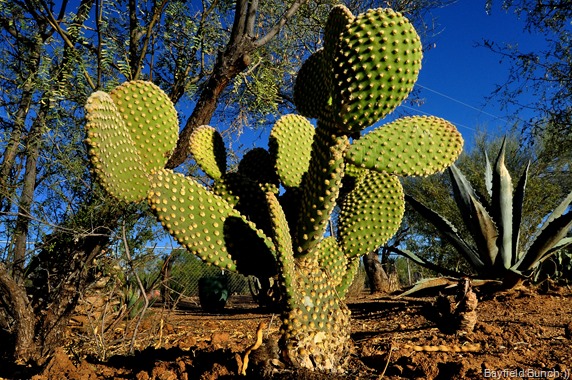 IT WAS 4:45 THIS AFTERNOON & TODAY’S SUN WAS RAPIDLY HEADED FOR THE HORIZON WHEN I REALIZED I HADN’T TAKEN A SINGLE PHOTO ALL DAY SO GRABBED A CAMERA & QUICKLY SHOT UP A FEW CACTUS PLANTS IN OUR YARD….THIS PARTICULAR ONE I PLANTED THIS AFTERNOON

I wasted a perfectly good wish this morning.  Out with Pheebs about 5:30 a.m. standing in our front yard under a canopy of twinkling stars from horizon to horizon I spotted & watched something streak across the sky near the Moon.  It was a meteorite commonly called a shooting star.  Ahhh, now I must make a wish & without even a milli-seconds thought two words popped into my head before I could even think about a wish.  ‘World Peace.’  Well I knew right away I had just wasted a perfectly good wish on something that will never happen.  At least not in my time or anyone else’s time I know.  Had I only wished for something realistically possible I might have had a chance of it coming true………………. 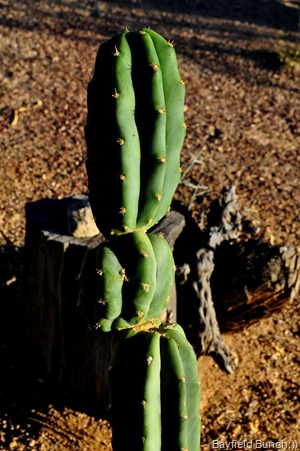 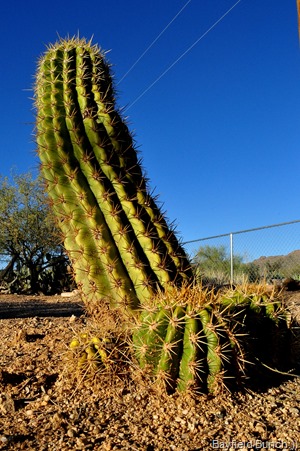 PLANTED THIS CACTUS ON THE LEFT TODAY AS WELL

Started my yard clean-up an hour earlier this morning therefore wearing myself out an earlier this morning.  The upper half of me doesn’t really wear out but the bottom half does.  When I get up in the morning my legs are generally reasonably good with no pains, aches, or stiffness but as soon as I start using my legs they begin to stiffen up & get sore.  Yes my weight plays a small part in that but it’s the darn arthritis that is my Achilles heal.  Came in , rested my legs for an hour & was back outside again this time planting 3 cactus plants Kelly had brought home Saturday.  I’m sure glad I bought myself a brand new pair of heavy duty CAT work gloves before arriving here in the land of prickly cactus plants nearly a week ago. 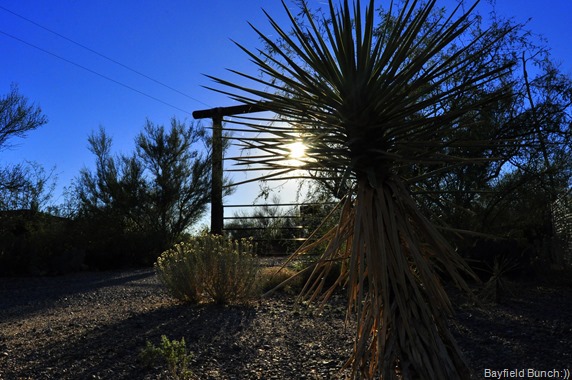 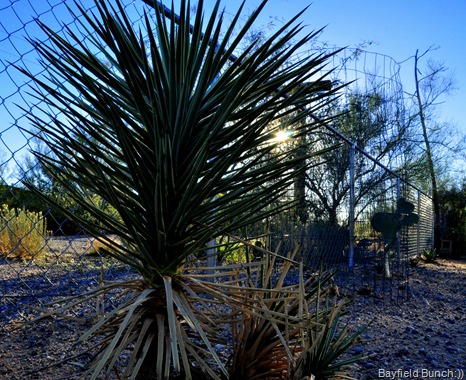 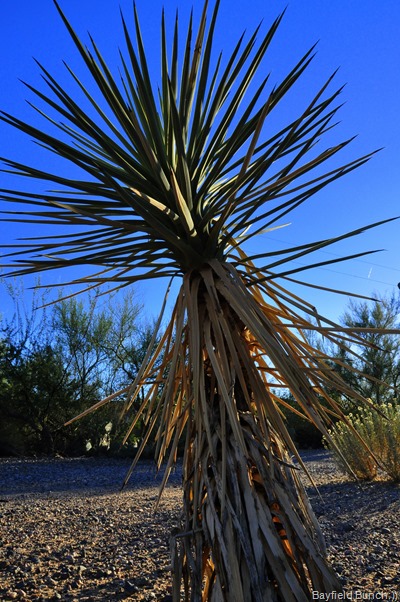 Here’s a little something I didn’t share with readers that happened to us on our last day traveling from Cameron to Congress Arizona last Tuesday.  When we rolled into Cameron Monday afternoon we had half a tank of fuel in the rig & I didn’t plan on adding any fuel until we reached the Chino Valley.  Easier on the rig to travel with a lighter gas tank out here in these hills & mountainous grades.  It was a Conoco gas station we decided to stay at for the night & quickly forgetting my previous gas decision reasoned if we filled up at the Conoco we wouldn’t have to fill up again before reaching Congress.  Of course I totally forgot about the loooooooooong grade climbing up to Flagstaff Arizona. 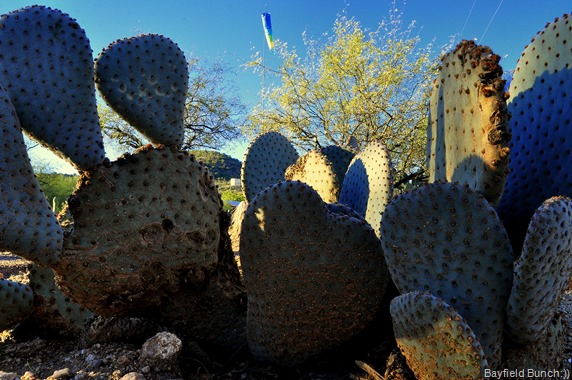 A nice morning as we rolled out of Cameron heading South.  Had maybe driven an hour when I could see the looooong grade a few miles ahead climbing higher & higher up towards Flagstaff.  I was sure hoping we would make it up that grade….but we didn’t.  About half or maybe two thirds of the way we began slowing down despite being in our second lowest gear.  The rig gave a jerk & I immediately felt the loss of power as the gas pedal went to the floor.  Hobbled off to the side of the road & shut it down.  Waited about 30 seconds then re-started the rig just like we had been told to do to re-set the computer.  I pulled the gearshift into it’s lowest gear but the Big EEE struggled to gain speed & for the next 20 minutes or so we became a traffic hazard on a 4 lane highway in more ways than one. 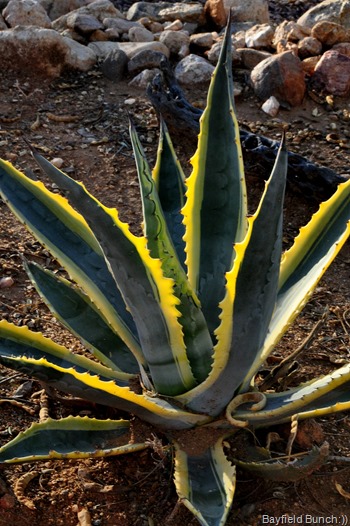 A year ago when this same loss of power happened for the first time west of Kingman Az. we also lost our turn signals & 4-way flashers & dam if the same thing didn’t happen to us again Tuesday morning in the Flagstaff traffic.  There we were struggling along at about half power or less with no emergency flashers to let drivers approaching from behind know we were only doing about 30 mph tops.  And no turn signals to change lanes & we did need to change lanes several times because we were confused as to how to reach I-40.  Our Garmin GPS had given us a bum steer a year ago coming into Flagstaff along this route causing us to become lost for about half an hour before finding our way out of Flagstaff amazingly headed in the right direction. 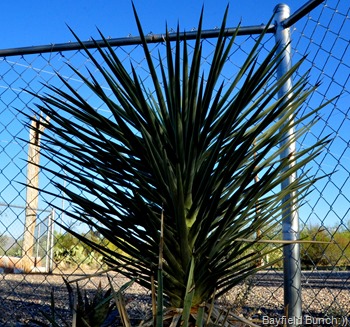 Luckily we were able to follow the overhead signs to a traffic light with arrows pointing to I-40 west.  And fortunately we were in the correct left hand turning lane.  At that red light I shut the rig off again & re-started it in hopes the computer would re-set itself which it did.  Also another piece of luck when I could see the on-ramp headed down to I-40 & not up to I-40.  The Big EEE made the left turn & entered the right turning lane managing to regain her composure on that downhill ramp as we entered I-40 just a flyin.  The rig ran perfectly fine for most of the rest of the way home.  Climbed up out of Prescott on half a dozen steep little grades on Iron Springs road Okay but then coming through the little whistle stop of Skull Valley we again lost power while slowing for a set of train tracks on a ‘downgrade.’  Very disappointing.  Found a spot to pull over on the narrow road, shut it down, re-started it & we were good to go the rest of the way.  By this time we were both so, so, so, tired & frustrated that when we reached Congress I just never blogged about it until now.  I’m convinced it is not a mechanical problem with the rig as much as it is a computer fuel mixture problem of some kind.  So as it stands right now we have no turn signals or flashers on the rig again.  Last year in Slab City one of the Slabbers there fixed the problem for us by installing a new ‘flasher’ unit so looks like we’ll have to haul the rig down to the Congress garage & have a new flasher unit installed again so who knows what kind of an electrical Gremlin lurks in the dash of our rig.  Until Flagstaff the Motorhome had performed flawlessly………………. 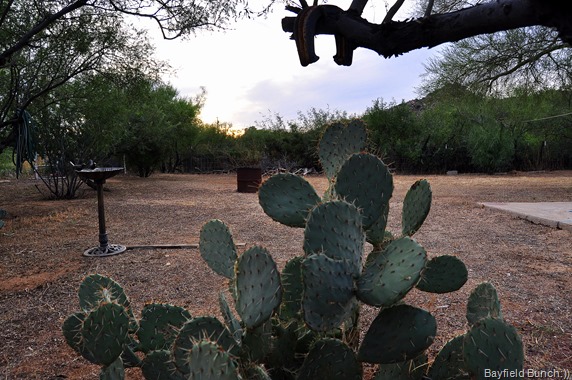 Nina, Paul, & Polly from WHEELING-IT are headed over in the morning for a doggy walk in the desert about a half block behind our house.  Pheebs will be happy to see Polly again & of course Kelly & I will be happy to see the Wheeling-It crew again as well.  We saw Nina & Paul in Borrego Springs last winter & they boondocked just up the end of Ghost Town Road from us 2 winters ago.  And if I remember correctly we saw them over at North Ranch at Janna & Mike’s last winter as well.  Of course my memory is not to be counted on but at least that’s how I think it was…………….. 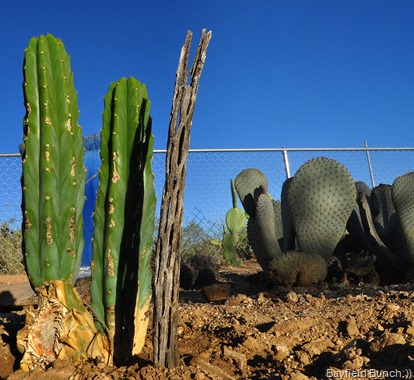 GROANER’S CORNER:(( An exciting new development in marine biology promised to extend the lifespan of an endangered species of porpoise. In fact, the data suggested that if a specific kind of African seagull, freshly out of the egg, was fed to the porpoises every day without fail, they would actually live forever!  The big challenge was to gather this food supply, this equivalent of chicken dinners for oceanic mammals, on a regular basis. There were many problems, including the fact that it could be dangerous, as these seagulls were found near water holes where all sorts of large game animals congregated.  But this was an important ecological breakthrough, so teams were sent out right away. They worked diligently to supply the necessary small fowl.  One afternoon, an intrepid gull-gatherer on his way back to base from the water hole encountered a pride of lions taking their afternoon nap.  As they were blocking his way, and his day's catch of seagull hatchlings was needed right away, he carefully stepped over the lions that were directly in his path.  That spelled the end of the experiment. The porpoises, deprived of their special diet, not only did not live forever, but they also became extinct. That was because an alert game control officer had spotted the team member, arrested him, confiscated his equipment and baggage, and charged him with……....’Transporting young gulls across sedate lions for immortal porpoises’.