I’M BETTING IT WAS WARMER IN BAYFIELD ONTARIO THAN IT WAS IN CONGRESS ARIZONA THIS MORNING:((

HAD OURSELVES A COLD RAINY DAY COMPLETE WITH SOME SLEET THIS AFTERNOON:((

How nice to now step outside our door to clear skies above whether they be filled with sunshine or starlight.  That is something I will continue to enjoy for the next 5 months no matter where we are here in the South-west. 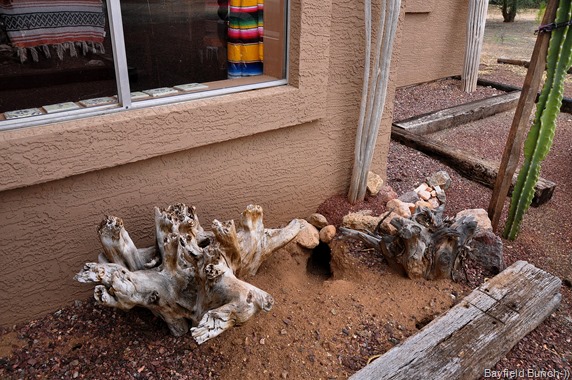 YEP, WE GOT US SOME CRITTERS UNDER THE HOUSE AGAIN

Due to internet connection problems a couple days ago I was unable to post my photos of the cattle drive we found ourselves in last Saturday morning so have put together a short Live Writer album.  We first encountered the cattle coming our way down the highway.  Made our way through them then drove to Torrey.  An hour later heading back to our campsite we once again came across the cattle drive from the rear & had to make our way through again……A fun experience:))

Am feeling much, much, better today than the past few days so am looking forward to getting the yard cleaned up which will entail a fair bit of raking.  Lots of Mesquite beans on the ground this year.  I enjoy yard work so am looking forward to that.  As mentioned before the Pack Rats have made quite a mess in the shed so that will keep me busy for awhile cleaning that up.  Will hang up the bird feeders again & look forward to seeing & hearing all my feathered friends in the back yard once more.  I enjoy yard work so it’s not a chore for me. 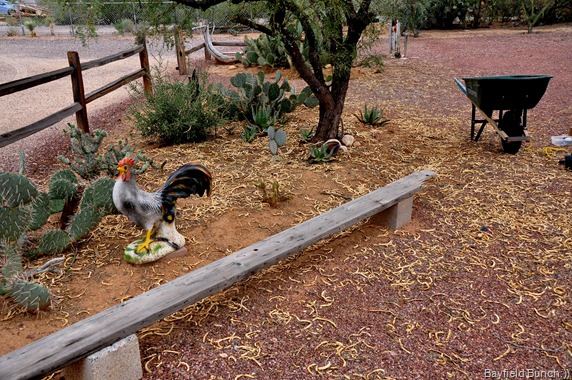 LOTS OF MESQUITE BEANS TO RAKE UP IN THE COMING DAYS

Because we were under partially sunny skies first thing this morning I was optimistic & started my list of things to do with a big load of laundry.  Half an hour after I had it hung out to dry…..it rained.  Not only that but we had to trot out our heaters, plug em in & get some warm air going in the house.  On & off showers with sleet this afternoon kept us mainly inside.  Heard Flagstaff had 5 inches of snow overnight.  Glad we didn’t get caught in that Tuesday.  Predictions are for a cool wet winter here in Arizona with a warmer winter predicted in Bayfield.  Think it’s 70F up there right now.  Nuts!! 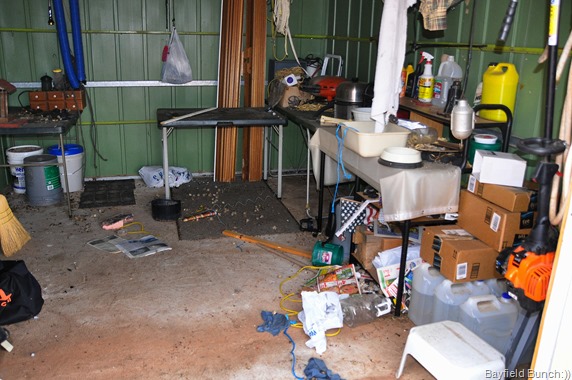 THIS IS THE MESS THE PACK RAT’S MADE 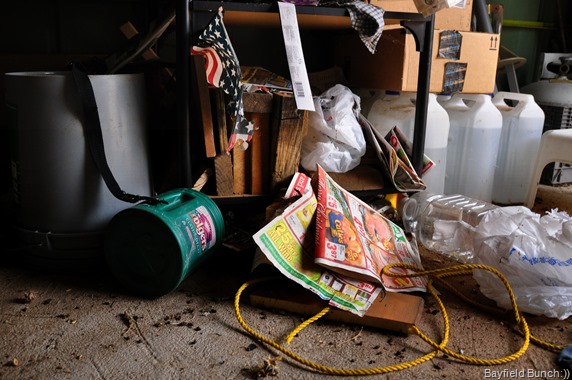 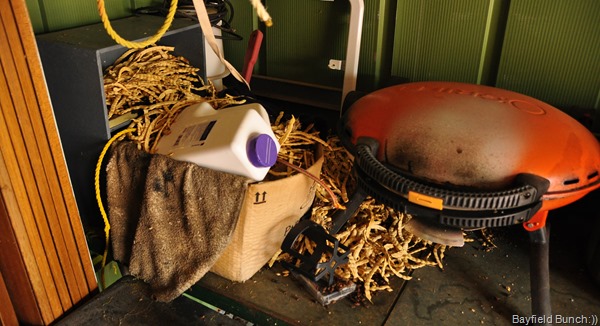 Kelly got all her stuff out of the rig & I moved it into it’s spot at the south end of the house.  Big, big, cleaning job coming up on it for sure.  Lots of red Utah muddy clay to remove.  Had to trim back a couple Palo Verde trees to get the Motorhome parked as well.  And I did make a start in on the Pack Rat mess in our shed. 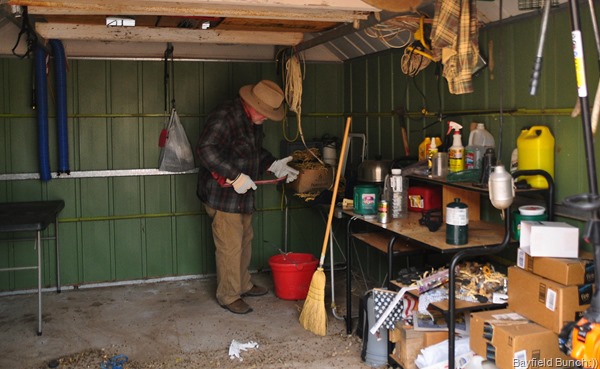 WORKING ON THE CLEAN-UP

Critters (probably Skunks) didn’t get in the hole at the back of the house I blocked up last winter so they just went around the front of the house & dug another hole under the northeast corner of our living room.  Gotta get the Critter Cam set up tonight to see what we are dealing with.  We’ve noticed what appears to be Coyote Scat around the yard & despite walking our fence line looking for a breach we can’t figure out where they are getting in.  They are probably after our cactus eating Rabbits. 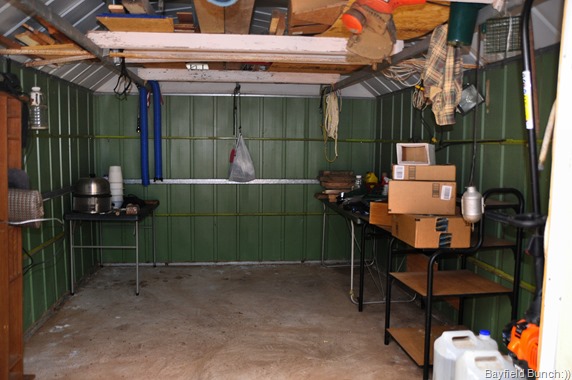 Now to set the record straight about a couple ‘comments’ that came in regarding something I wrote a couple days ago.  Kelly suggested I just ignore these comments but I take exception to personal affronts when accused of something totally incorrect………First, Craig McKenna in part left this comment……. “Jeep gas tanks generally don't hold more than 20 gallons. At 6.3 pounds/gallon, the weight of the gasoline in your toad's tank would be no more than 126 pounds, Why do you make such a fuss about burning the gas in the tank before towing it?  Making a fuss Craig? Really!!  Mr. McKenna is no doubt correct with his number crunching but may I remind him he has a diesel engine in his coach & not a gas engine.  But of the 2 comments, I take greatest issue with this one when Ed Frey replied to Craig McKenna’s comment saying, “  Craig, I have posted Comments much like yours in the past. This aversion to driving in mountains with a full tank of gas is just a foible of Al's. Or, maybe he just does it and writes about it to drive people like you and me crazy. He is not going to change this habit in the face of the logic that you have expressed so we need to read it, laugh and move on.  What you did not point out was that the Gross Vehicle Weight Rating (GVWR) for the 2003 Commander Triple E is 22,000 pounds with a 75 gallon gas tank. So the TOTAL added weight if BOTH the Triple E and the Jeep tanks were FULL would be less than 600#. But that is just something to read, laugh and move on”………… I met Ed Frey a number of years ago in Elfrida Arizona & if I remember correctly he drives a Class C which is definitely smaller & lighter than our 37 foot Class A & in that Class C is likely a 10 cylinder engine & here’s the kicker, Ed Frey does not tow a vehicle behind him.  At least he didn’t when I met him.  Your numbers don’t mean a thing Mr. McKenna & Mr. Frey & until either one of you has driven a 37 foot gas powered Class A Motorhome through the mountainous grades we have I strongly suggest both of you think hard before making the types of comments you did.  My greatest disappointment comes with you Ed, referring to Craig’s comment as ‘logic.’ What!!  But saying “This aversion to driving in mountains with a full tank of gas is just a foible of Al's” & inferring that I write about this gas & weight problem just to drive people crazy is a personal insult & your comment crossed the line.  You’re a smart guy Ed…..what happened??  You have followed our travels since I began posting years ago.  Could this be a case of that old saying, ‘Familiarity Breeds Contempt’ I hope not…………..Now having got that off my chest I would like to thank the 3 following commenters who obviously do ‘know what they are talking about’!!  I will let their comments speak for themselves…….

We know about the gasser (ours is 36 feet), in the mountains, another reason why we have not travelled that route and like you said every pound makes a difference. We have disconnected our car a few times, but its still a hard climb.

We passed thru this exact area about a month ago, returning to So-Cal from Colorado. Our 32' Bounder gasser was fine as long as our Liberty was detached. Your experiences when hitched are the same as the rest of us "gassers". I often wonder if a Banks turbo setup would make a big difference. BTW, the road crew was there a month ago as well.

Know exactly what you mean. We were down that neck of the woods a few years ago when we had our 37 foot Fleetwood gasser. We did the same thing, unhooked the car and gave the rig a break. Still struggled up some of those grades. Could have walked faster I think. It's just awesome down there, so beautiful. So glad though that we have the 5th wheel with the big diesel F350. Diesel really does make a huge difference. Drive safe.

GROANER’S CORNER:(( King Ozymandias of Assyria was running low on cash after years of war with the Hittites. His last great possession was the Star of the Euphrates, the most valuable diamond in the ancient world. Desperate, he went to Croesus, the pawnbroker, to ask for a loan.  Croesus said, "I'll give you 100,000 dinars for it."  "But I paid a million dinars for it," the King protested. "Don't you know who I am? I am the king!"  Croesus replied, "When you wish to pawn a Star, makes no difference who you are."