THIS UPCOMING 2015/16 WINTER SEASON WILL BE OUR 10TH RV SNOW BIRDING YEAR & WE’RE HOPING THERE WILL BE MORE TO COME:))

This winter will mark our 10th Snow Bird year traveling to & around the great American South-west.  Seems so long ago now back in the Fall of 2006 when we were rushing around trying to decide what kind of an RV to buy, where to go, & how long to stay wherever it might be we ended up.  We were true Newbies & we had the enthusiasm & excitement to show for it.  A lot of changes have taken place in these past 10 years & we have made our fair share of right & wrong decisions.  Going with a solar system in our second season was one of the best RVing decisions we ever made while downsizing RV's several times a few years ago was a bit of a stumble for us.  Buying our Congress house in 2012 was a right thing to do & we're hoping our decision to sell the house this winter will go down as one of our better decisions as well.  If Kelly & I were American citizens things would be much simpler & we wouldn't be selling it but as Canadians we feel for various reasons the time is right.  I did mention the reasons for our decision in a previous post which I will re-post here…………With the exchange on the Canadian/American dollar we feel the time is financially right to let it go.  We also feel with the uncertain economy & an unknown shaky future shaping up across the land it would be wise for us to pool our resources back here in Canada.  If things suddenly take a bad turn we do not want to get stuck owning a house south of the border & for whatever reason not be able to return to it.  And may I add we both have some looming health issues which may be of some concern in the not to distant future as well.  Our travel insurance rates have been escalating dramatically each year & one little medical bump in the night for either one of us could financially put an abrupt end to our travels at any time. 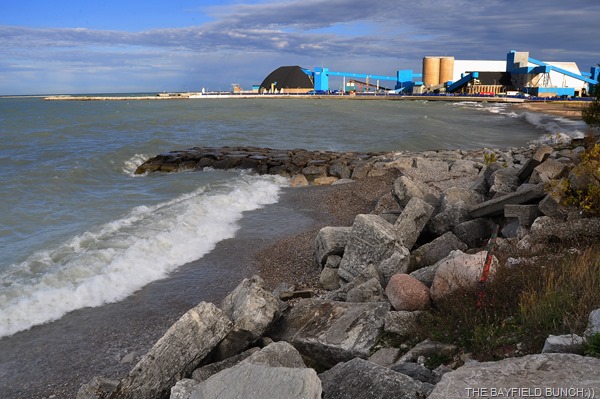 THE TOP SIDE OF GODERICH’S SIFTO SALT MINE
Despite a sour 10 day weather forecast a few days ago we sure had us a bonus Autumn morning with periods of sun & cloud.   Pheebs & I took ourselves for a drive up to Goderich & down around the harbor for a relaxing walk along Lake Huron's shoreline.  Nice to see & hear large rolling waves crashing upon the rocks & sandy beach.  Winds were cool while the sun felt warm.  Reminded me very much of our winter days in the South-west. 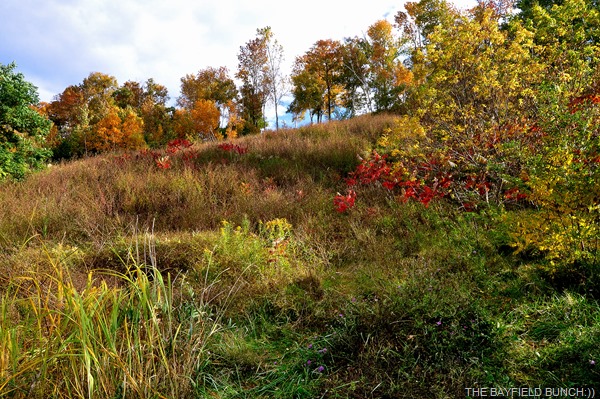 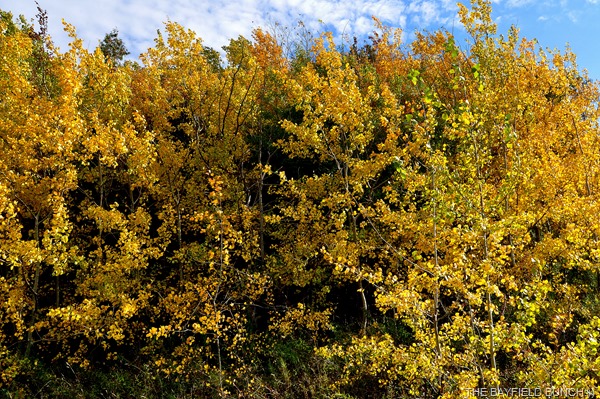 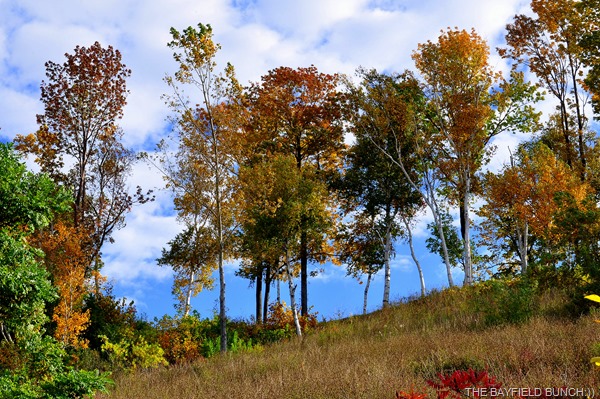 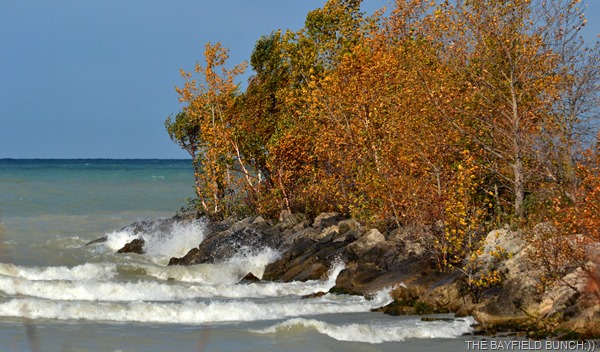 On our morning walk we had noticed someone had thrown out a pile of good usable lumber so upon our return from Goderich I hooked up our utility trailer & headed down to our Park's recycle area & began sorting through the pile.  Loaded up a bunch of 16' 1x3's & some 2x4's.  Perfectly good lumber & I just couldn't see leaving it there to rot.  I’m guessing there were at least 60 or 70 good pieces there & the more I dug through the pile the more lumber I found & loaded up.  Soon became apparent there was a lot more there than I first thought.  Not being good at building things I knew I couldn't use this lumber but I knew someone who could.  Took a trailer load to my good friend Richard's house & backed into the driveway.  Yup Richard could use it alright so we unloaded it all & headed back to the recycle area for another half load.  Richard is one of those fellas who can build anything & build it well. 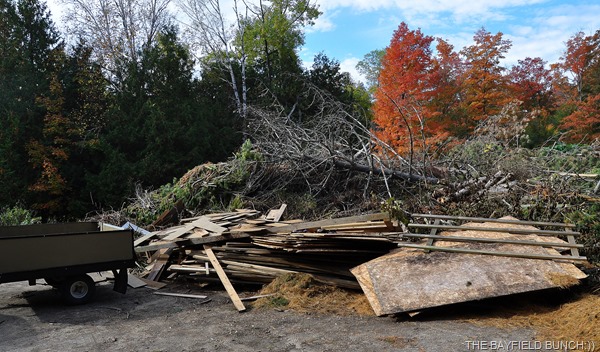 TOOK ME AWHILE TO SORT THROUGH THIS PILE OF USABLE LUMBER 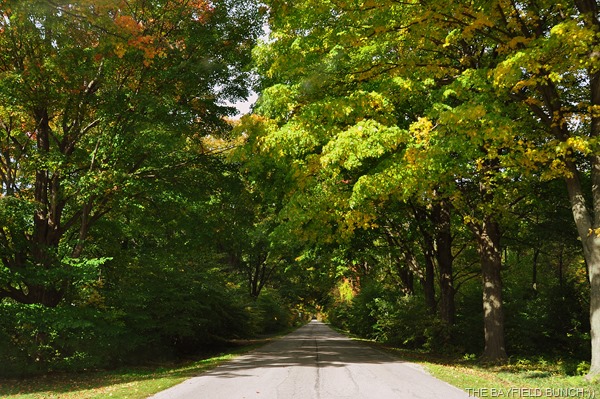 ARRIVING BACK AT OUR PARK THIS MORNING
Kelly loaded more things into the rig today as we count the days down.  I was careful not to fill the Jeep with gas this morning.  Don't want to end up next Friday with the weight of a lot of unnecessary gas.  Not good for towing.  A bit unusual for this time of year but we had thunder storms roll in off the lake late this afternoon bringing with them wind & rain. 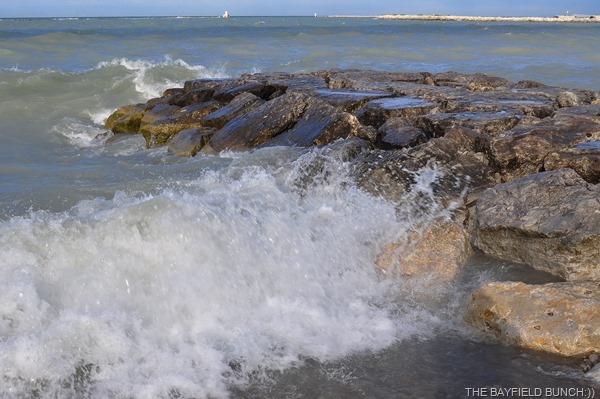 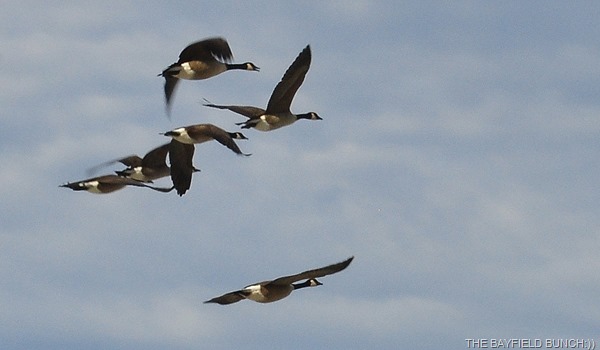 A GAGGLE OF GEESE MAKING THEIR WAY ALONG THE SHORELINE 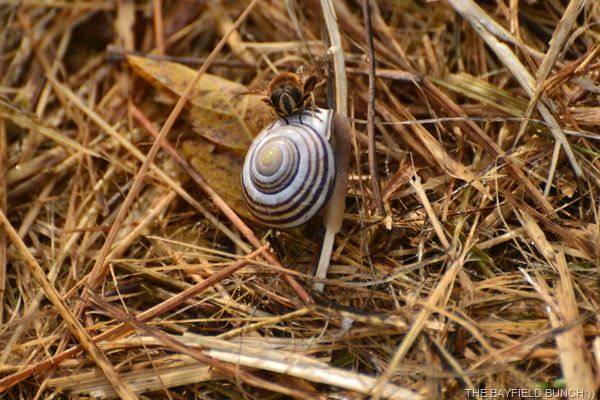 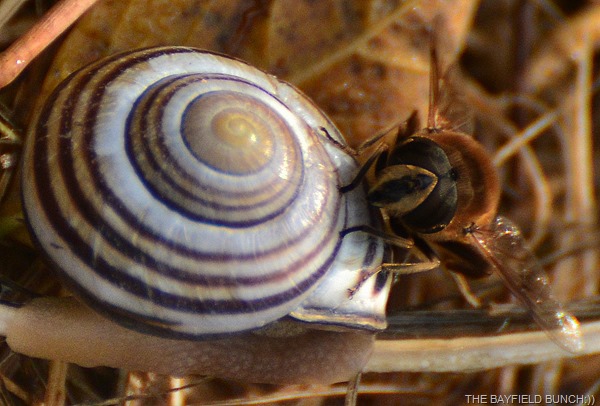 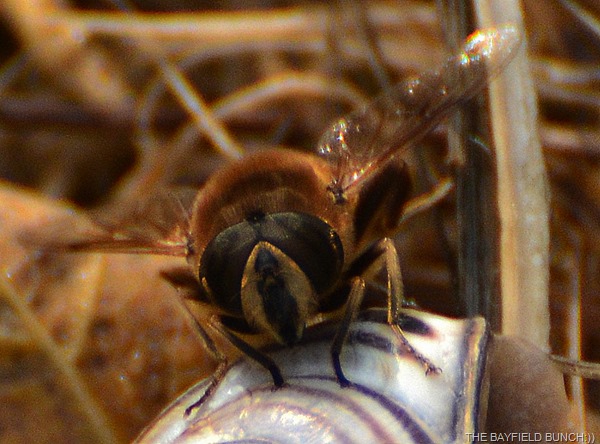 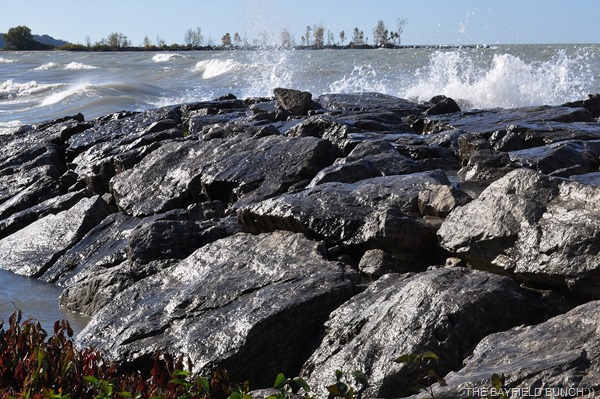 Read on-line a few days ago the Mayor of Goderich has said despite a pending lawsuit the Inukshuks along the beach are not going to be taken down.  Mayor said they will let winter storms deal with the Inukshuks. 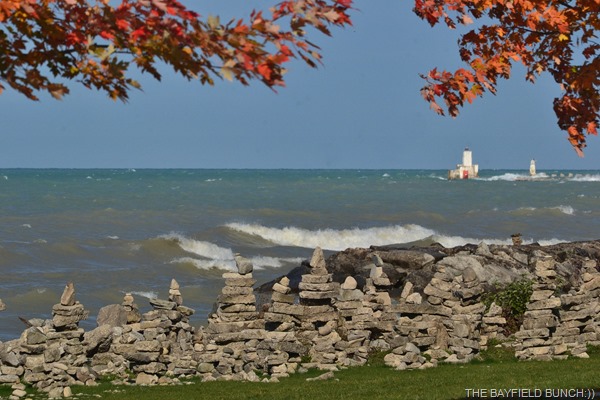 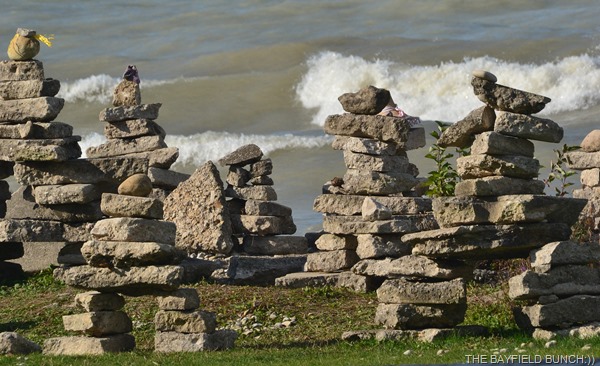 Sad to receive an email Wednesday night from fellow RV Blogger Glenda at Casita Escapes saying her husband of 20 years Jeff had passed away due to complications of Diverticulitis.  Glenda & Jeff have been full-timing for years & we first met them back in January of 2013 when they dropped into see us at our house in Congress Arizona.  We last saw them just this past winter when they boondocked for a time down at the end of Ghost Town Road about half a mile from us in Congress.  Glenda, in her email said, “I will continue to live a nomadic life as long as possible, pulling my little white egg around. . .once I learn how to hook up to the trailer & then back it where I want it”.  All the best Glenda, sorry to hear about Jeff & we may cross trails with you again somewhere out in the mountains & deserts of the great South-west. 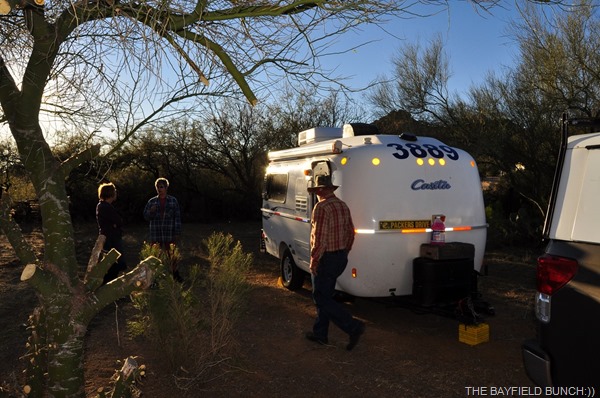 GLENDA & JEFF SET UP THEIR CASITA IN OUR SIDE YARD 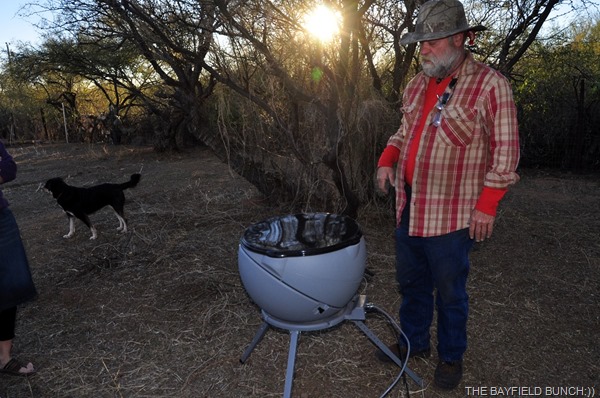 JEFF SETS UP THEIR SATELLITE DISH
I think one would be very hard pressed to find a nicer town along the Lake Huron shoreline than Goderich.  For sure they have the most scenically interesting & greatest beach area .  Not big enough to be a city, not small enough to be a Village but Goderich fits nicely in between the two with the emphasis being on ‘town’.  Grand old homes here & the community competes & has won awards in the ‘communities in bloom’ contest.  In 2012, Goderich was a National Finalist in that competition. Depending on who tells the story, either Queen Victoria or Queen Elizabeth II called Goderich, Ontario, "the prettiest town in Canada.  However, it seems there never was a royal visit, but don't let that stop you from visiting Goderich”.  I’m thinking Goderich’s population might be somewhere around 8,000 now.  Each time I come to Goderich which can be once or twice a week I like it more all the time.  Kelly & I have said if we ever decide to move into a town some day it would likely be Goderich. 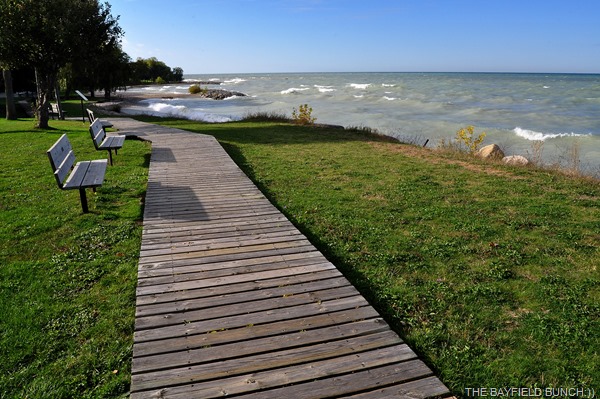 JUST ONE OF THE MANY MANY REASONS I HAPPEN TO THINK GODERICH ONTARIO WOULD BE GREAT PLACE TO LIVE
And as I post this tonight we have thunder & lightning going on as well as heavy rains coming down.  I have a feeling we may wake up to a much colder day Friday & there was mention of snow flurries at some point in the next day or two:((  But warming up again next week:))  OMG we’ve got hail pounding down right now!!!!!!!!!!!!!!

LOOKING INLAND FROM THE LAKE WHILE HIKING ALONG IN THE DOG WALKING AREA
GROANER’S CORNER:((  The new family in the neighborhood overslept and their six-year-old daughter missed her school bus.  The father, though late for work himself, had to drive her. Since he did not know the way, he said that she would have to direct him to the school.  They rode several blocks before she told him to turn the first time, several more blocks before she indicated another turn. Up one street & down another this went on for 20 minutes - but when they finally reached the school, it proved to be only a short distance from their home.  The father, much annoyed, asked his daughter why she'd led him around in such a circle.  The child explained, "That's the way the school bus goes, Daddy. It's the only way I know."
Posted by Al Bossence at 10/15/2015