STUART IOWA TO KEARNEY NEBRASKA & WE CALLED IT AN EARLY DAY………….. 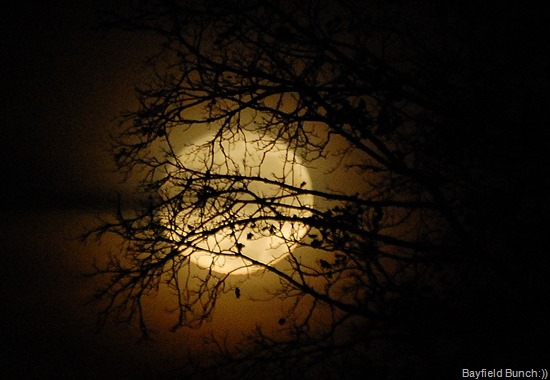 We underwent our first ‘going back an hour’ time change Sunday so our body clocks actually had us up an hour earlier at 4:30 which was alright because we wanted to be out of the grain mill’s parking lot before any workers or farm trucks arrived anyway. 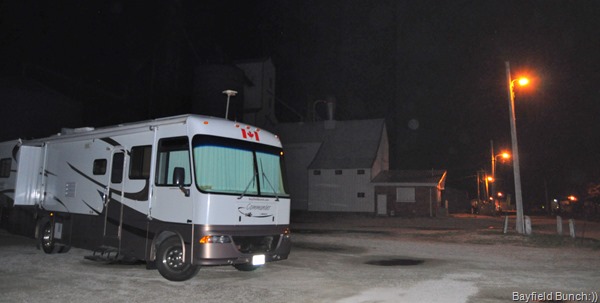 Under the cover of darkness we quietly slipped out of Stuart Iowa at 6:20 again heading west on I-80.  Watched a nice sunrise in my driver’s side mirror. 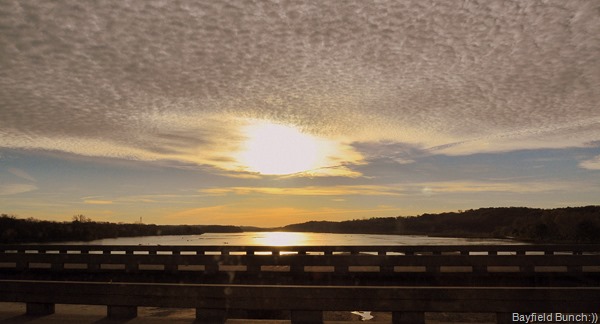 SUNRISE OVER THE PLATTE RIVER

Traffic started to thicken up a bit as we approached Council Bluffs which is pretty much attached to Omaha Nebraska.  We were soon into 8 lane traffic & just caught the tail end of the morning rush about 8:15.  We held our own with the local Omaha morning speed crazies & banged our way right through the traffic with nary a scratch.  Nice to get out the other side of Omaha & see nothing but wide open cornfields again. 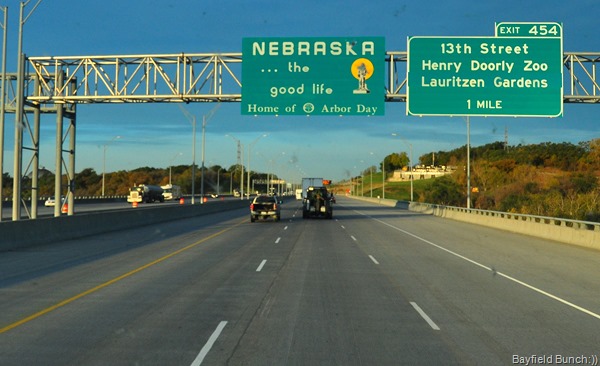 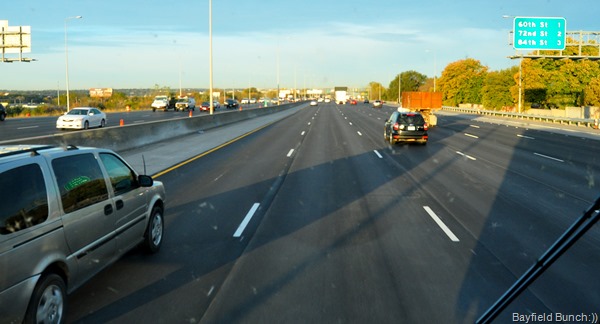 I FIND IF I JUST BLOW MY HORN ALL THE WAY THROUGH A BIG CITY EVERYBODY AHEAD JUST CLEARS OUT OF THE WAY FOR US:))  (OMAHA) 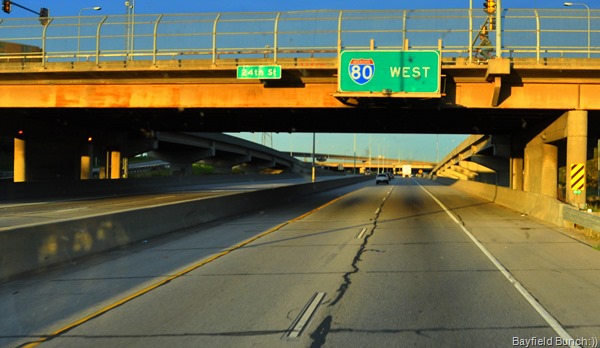 Breezed through Lincoln Nebraska knowing our left turn for Congress Arizona was coming up soon at the town of York west.  I watched the turn-off go by as we blew right through York on I-80 heading for Utah:))  Must say I was tempted to swing down through Denver & haul ourselves up & over those steep mountain grades which had given us grief at the end of last March.  A much shorter way to get to where we were going for sure but neither one of us wanted to go through that again so we decided to take the longer but much easier route up through Laramie & Cheyenne to Rawlins Wyoming.  It will give us some new scenery. 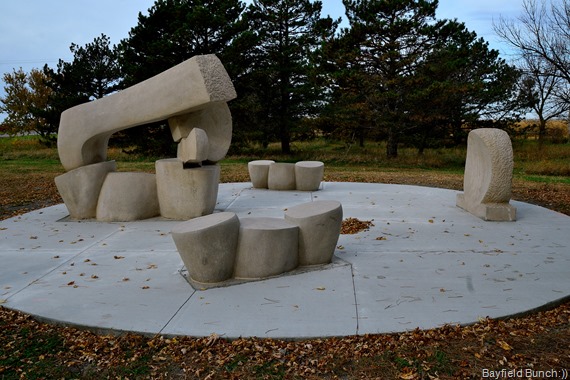 NEW SCULPTURE IN A REST AREA WE STOPPED AT

Didn’t sleep well Sunday night so knew I would tire early.  With that thought in mind we decided to pull off the road sooner today.   Noticed the town of Kearney Nebraska had a Walmart Supercenter so that was our destination & we rolled into their large parking lot just before noon & shut er down for the day.  A quick trip into the store for some groceries & it was back to the rig for a much needed rest.  I don’t mind overnighting at Walmarts at all. 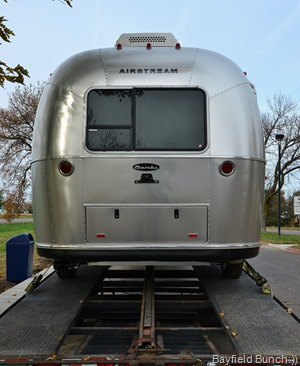 THOUGHT THESE AIRSTREAMS WERE KINDA CUTE…..THEY SAY ‘SPORT’ ON THE SIDE & ‘BAMBI’ ON THE BACK

With some of the annoying little Gremlinesque problems we have had with this rig over the past year I’m happy to report that so far everything is working fine such as the water pump, refrigerator, & water heater.  Inverter is doing the things it is supposed to do, generator starts right up if needed & even the driver doesn’t seem as cranky as usual.  Key words there were ‘as cranky’.  Our fingers are crossed this positive trend will continue.  And Jim from exploRVistas asked in a comment how Libby (Jeep Liberty) was doing out back.  Well she’s towing along just fine I’m happy to say.  Tows just like Jeepers (Jeep Wrangler) did…………………:)) Over the years I have always been amazed by something in our Snow Bird travels & that is how fast we always adapt to our traveling lifestyle when switching from our sticks & bricks to the RV.  Of course the Motorhome doesn’t have all the perky comforts & conveniences a house does but it certainly is the next best thing.

I-80 GATEWAY TO KEARNEY NEBRASKA

This is our third night on the road & I have become quite cozy in my little corner of the Motorhome.  In all the other RV’s we’ve had I have never had it so good.  Seated in my recliner I have everything at my finger tips now.  I have a table to set my cameras on, another narrow table with one shelf holds all my stuff like camera battery chargers, flashlight, clock, kindle, headset, Toshiba external hard drive, coffee cup holder, small calculator, a Canon point & shoot camera, an overhead battery operated light, magnifying glass, computer reading glasses, a screen cleaning cloth & half a dozen other little items.  And if my right arm was just a mere 4 feet longer I could even pull open the refrigerator door & haul myself out a pork chop or two.  Groovy.  To my immediate left is a window which I can just reach over & open or pull the night shades down.  To my right is another small narrow table which my computer mouse rides around on.  Yessereeee it’s quite a set up.  You know, it kinda seems like I’ve got it a bit too darn nice now & I must admit……that makes me just a little nervous!! 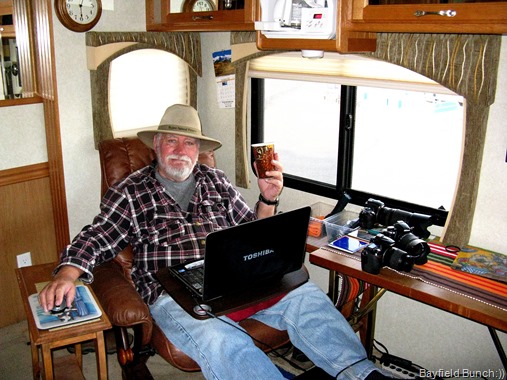 Despite using a few pillows here & there I was unable to get myself completely comfortable for sleeping in my recliner again so it looks like I’ll have to try sleeping on our pull out couch again.  The couch is surprisingly comfortable but I have not tried sleeping while lying down since my vertigo incident a couple months ago.  We’ll see how it goes tonight.  If Pheebs beats me to the couch I might have to sleep on the floor.

Guess who finished off the last of our yummy date nut loaf today.  I’ll give you a hint…..it wasn’t Kelly & it wasn’t AL but the eater had 4 furry little paws!!  Kelly forgot to put the last third of our date nut loaf away before we headed  on in to Walmart.  When we returned it had vanished from atop the counter where a certain little dog had obviously been doing some counter surfing………..!!!!

Here’s a little something I just copied & pasted from Ivan’s post tonight::

Wheeling It  Nina & Paul  have been in the Williams area, planning to visit the south rim of the Grand Canyon.

Bayfield Bunch are enroute from Ontario to Arizona, one Cracker Barrel at a time!

Jean and Skip have been checking out the Lake Havasu area

Wandering Willy is making his way down 395 in eastern California, perhaps with Death Valley in his sights.

Looking forward to seeing everyone down south this winter!

KEARNEY WALMART IN KEARNEY NEBRASKA…..HOME AWAY FROM HOME:))

GROANER’S CORNER:(( My friend called me in hysterics. “I just saw a mouse in my kitchen!” she yelled. “I’m so grossed out! It’s so disgusting!”  “What are you going to do?” I asked.  “I’m not sure. But you can bet I’ll never eat the stuff I drop on the floor anymore.”