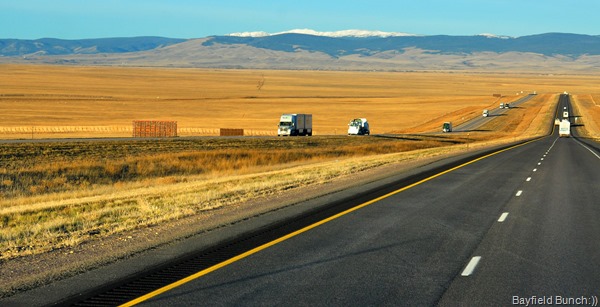 I was hoping it was Wal-mart’s parking lot sweeper machine I was hearing around 5 a.m. & not a snow plow going by.  With fingers crossed I cautiously raised the blind beside my bed a couple inches & peered out.  Big sigh of relief, no snow.  In fact when I took Pheebs out a half hour later I was happy to see clear skies overhead & noticed Tuesday’s winds had diminished some.  Lots of frost on everything though & it sure was freezing cold. 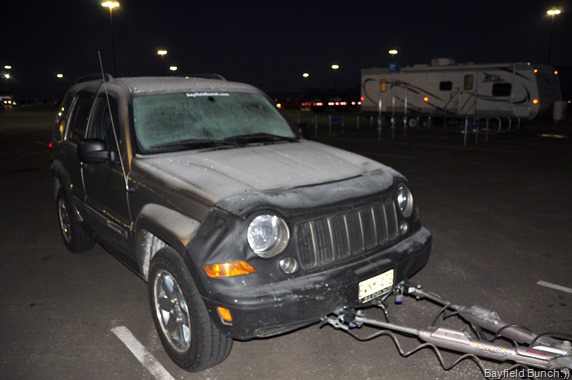 SURE WAS FROSTY COLD IN LARAMIE WYOMING THIS MORNING

ROLLING WEST ON I-80 THROUGH LARAMIE ABOUT 7:30 WE WERE ALREADY DEALING WITH WIND GUSTS 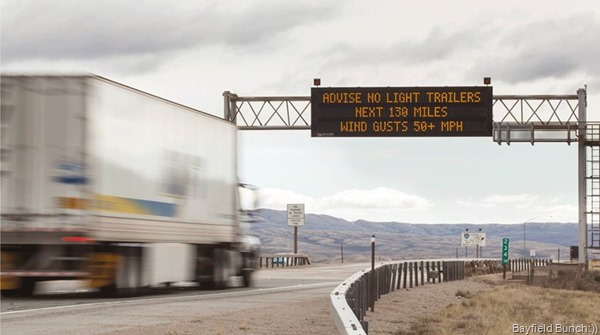 Checking weather ahead for the next few days we decided to head for warmer temps down around Rifle Colorado.  There’s a short window of good weather in the Capital Reef area for Friday, Saturday, & Sunday so we hope to be there for those days.  On Monday the weather begins to rapidly deteriorate so we’ll head out & make tracks for Congress Arizona at that time.  Well at least those are the Jell-0 weather plans for now.

ANOTHER BUNCH OF ROAD PHOTOS FROM THE DRIVER’S SEAT TODAY

THE SETTING MOON IS VISIBLE IN SOME OF THESE PHOTOS

I SURE DO ENJOY SEEING THOSE SNOW CAPPED MOUNTAINS

Motored out of Wal-mart’s parking lot at 7:20 Mountain Time with sunrise just breaking in the east.  Soon as we rolled up onto I-80 West we were immediately aware of stiffening head winds again & all the way from Laramie to west of of Rawlins we did constant battle with those winds.  Warning signs said 50+ mph winds & advised ‘no small trailers’.  Luckily we had a full tank of fuel to keep us anchored but the extra weight made a lot of extra work for the Big EEE hauling itself up the many, many, steep grades in the hundred mile stretch between Laramie & Rawlins.  On the upside we had a sunny day, dry roads, & beautiful rolling hills scenery all the way.  Nice to see something new & travel a route we hadn’t traveled before & it sure is nice being back in cowboy country again:)) 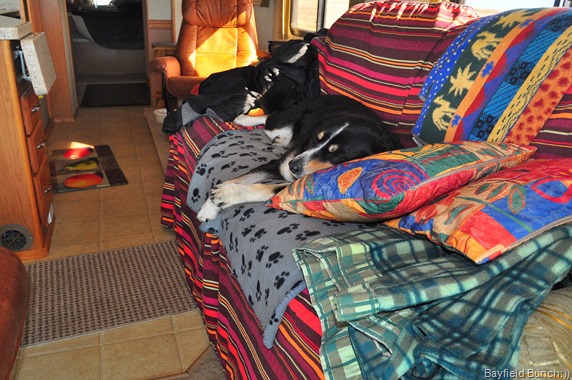 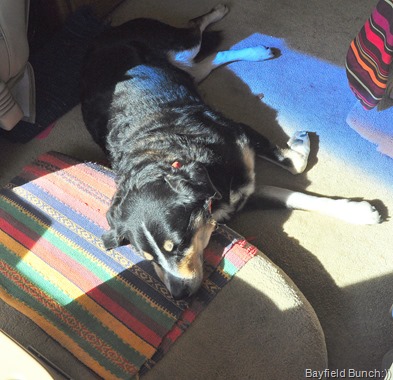 THIS IS PHEEBS PREFERRED SPOT BETWEEN OUR SEATS IN THE MOTORHOME

Picked up a couple McDonald coffees in Rawlins & headed the last 25 miles west to our highway 789 turn off.  What a huge relief it was to finally reach this spot & finally swing the rigs nose southward out of those unrelenting gusty winds.  As we rolled off I-80 the thought occurred to me we had been on that interstate since early last Sunday morning when we picked it up just south of Chicago.  I-80 had treated us well for three & half days with it’s much lighter traffic loads out here in the west.  There were times on I-80 in the last day or two when I could look ahead & in my rear view mirror & see we were the only ones on the interstate.  Sounds unbelievable but it’s one of the perks here in the west. 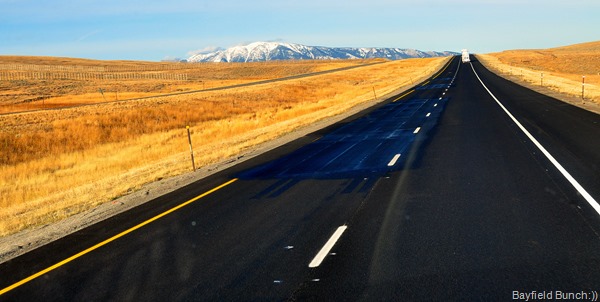 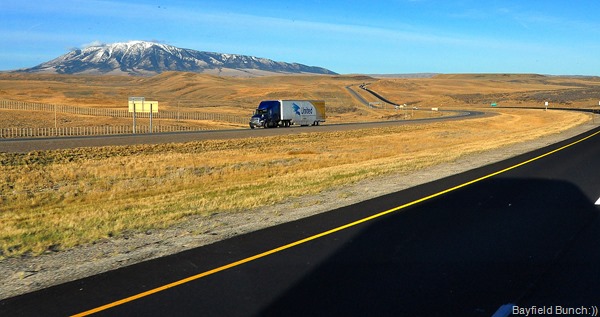 What a nice feeling being back on a two lane road again & we pretty much had the whole highway to ourselves for the next few hours all the way down to Meeker Colorado.  Great scenery all the way with snowy mountains on our left & tall hills on our right.  Sweeping valley vistas, mountain side ranches, a herd of wild white tail deer, grazing cows, wooden rail fences mixed in with some ponds & a mountain stream running alongside the road south of Baggs Colorado. 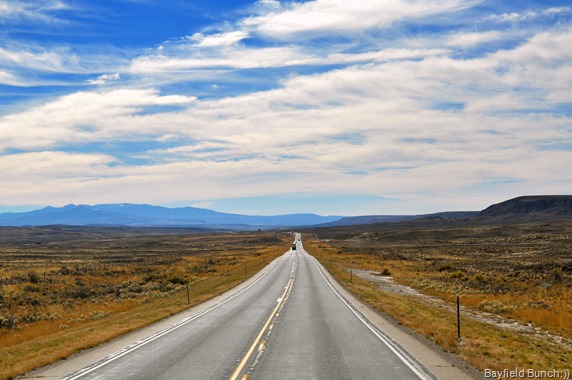 Sad news from SASSY today on her post entitled ‘Bennie.’  We did briefly meet Bennie at our campsite on Ogilbe Road west of Yuma last winter when Sassy dropped by for a few minutes.  Our thoughts go out to Sassy at this time of loss. 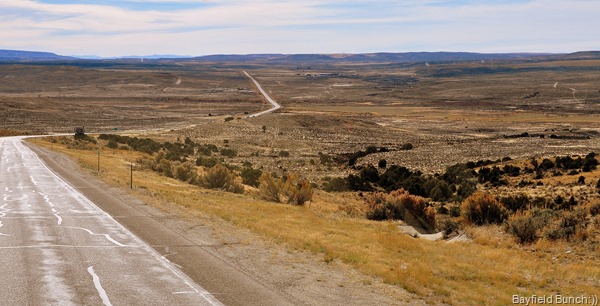 COLORADO DEAD AHEAD ABOUT HALF A MILE 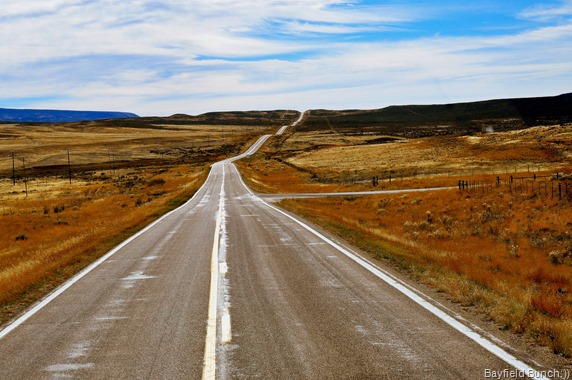 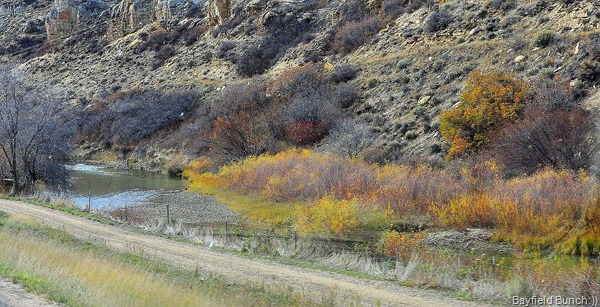 TOO BAD ABOUT ALL THE GLASS REFLECTIONS TODAY

We had decided to head for Rifle Colorado where we knew temperatures to be milder but about 40 miles north of Rifle we rolled into the wee town of Meeker.  It was warm there & we decided to look for a county park & call it a day.  It was 2 p.m.  We lucked out & found a Park just a block off main street at the southern end of 4th street.  The Park had a large parking lot area with a few electric outlets plus a dump station & water at one end.  Fifteen dollars a night to the Iron Ranger so we dumped our tanks & took on some fresh water.  We are the only one’s here & it’s a nice spot with a grassy picnic area complete with mountain stream flowing by a short distance away.  Pheebs later took Kelly for a walk all around the Park’s perimeter. 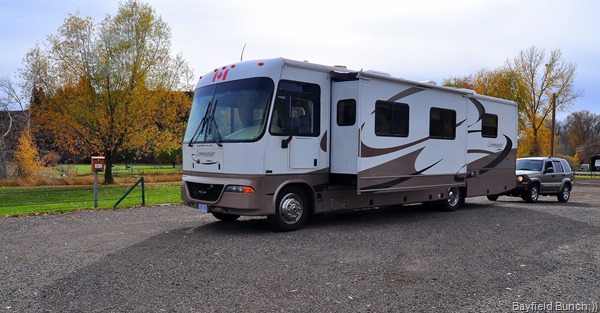 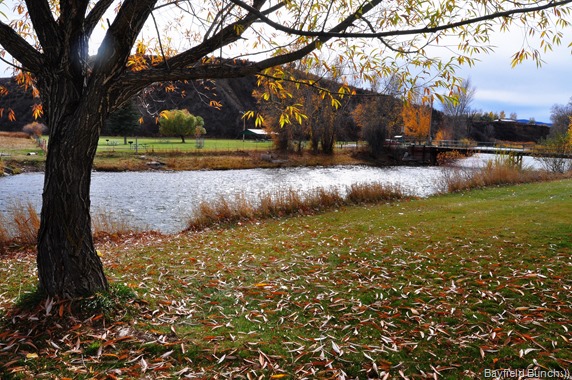 SNOW CAPPED MOUNTAINS CAN BE SEEN IN THE BACKGROUND AT LEFT 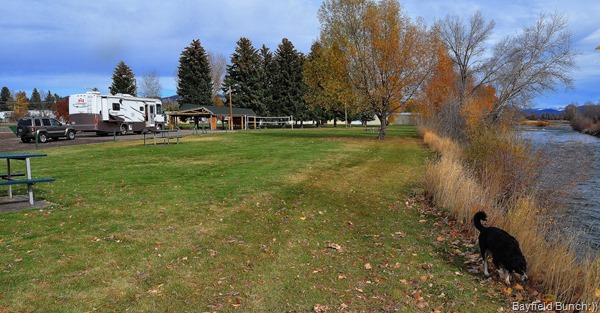 Rain in the forecast for Thursday so I think we’ll head for even warmer Moab & find us a boondocking spot before heading on over to Torrey (Capital Reef) Friday.  Supposed to be cold over there tomorrow but temps are coming up starting Friday.

GROANER’S CORNER:(( “Honey!” screamed my husband from our bedroom, “you gotta check this out!  “What is it?” I hollered back from the kitchen. “You’re not going to believe what I found when I was drilling a hole  through the wall! I found a secret stash of bottles!” Just then I heard my daughters voice hollering from the bathroom, “I’m trying to brush my teeth in here & someone is drilling a hole through the medicine cabinet!!!!!”