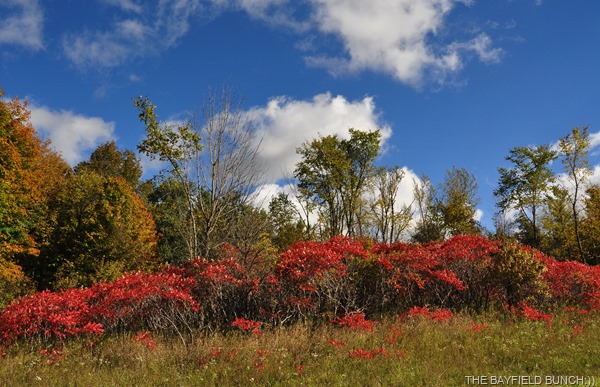 Kelly rolled out our driveway headed for Guelph Ontario at 9:55 this morning with Pheebs & I rolling out one minute later for destinations unknown.  First heading East we changed our minds then headed North for Goderich.  Popped into Walmart for a few things.  Noticed Tim Hortons is now closed in there. 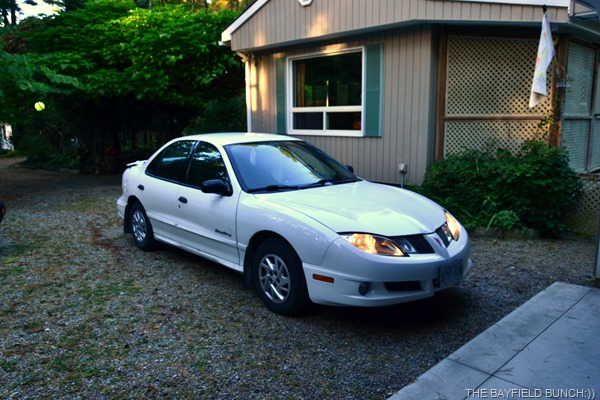 KELLY HEADS OFF TO CAMBRIDGE & GUELPH THIS MORNING

It was easier turning right out of the Walmart parking than left so we headed towards downtown Goderich veering off before we got there & headed North out of town following highway 21 along the lake to a little place called Kingsbridge whereupon we swung off #21 & headed in a North-east direction ambling in-land on any old country road that caught our fancy.  How nice to be under sunny blue skies again with no particular place to go or be.  Seemed like we had the whole countryside to ourselves once again. 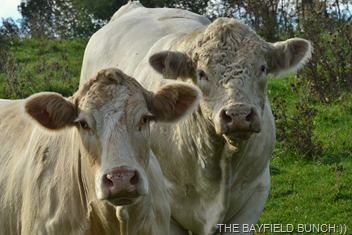 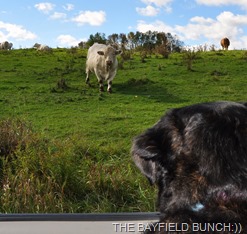 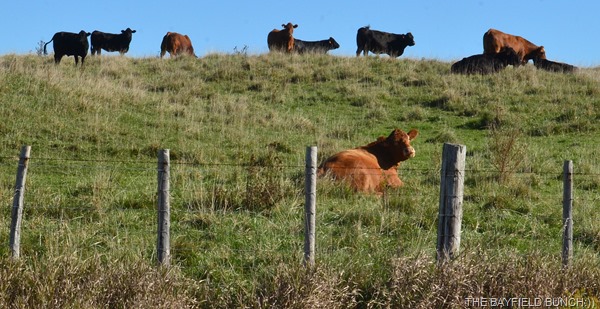 It’s always a fun thing for me if I can get myself temporarily mis-placed sometimes & we managed to do that this morning somewhere between the small burgs of Ripley & Lucknow.  Even managed to actually travel some roads I had never been on before.  Love when that happens. 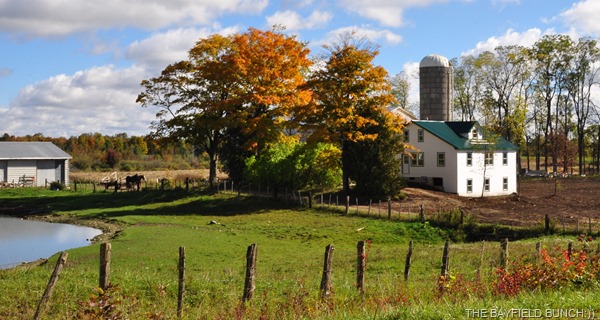 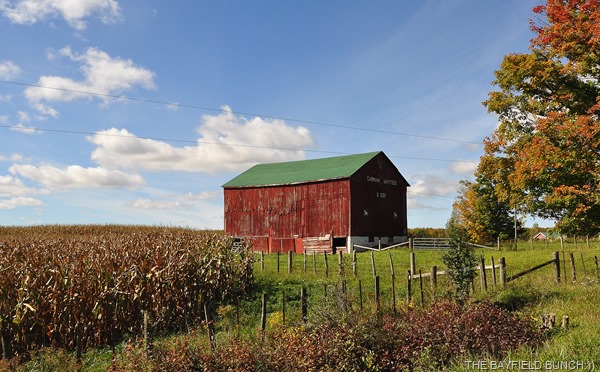 Forests aren’t quite ablaze with color yet but they are indeed finally headed in that direction.  The old painter’s brush has definitely touched more country foliage than the last time Pheebs & I were out which I think was just a few days ago.  By the way it’s our Canadian Thanksgiving week-end right now. 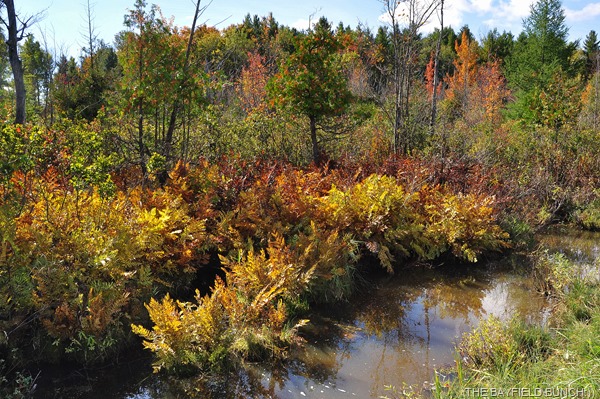 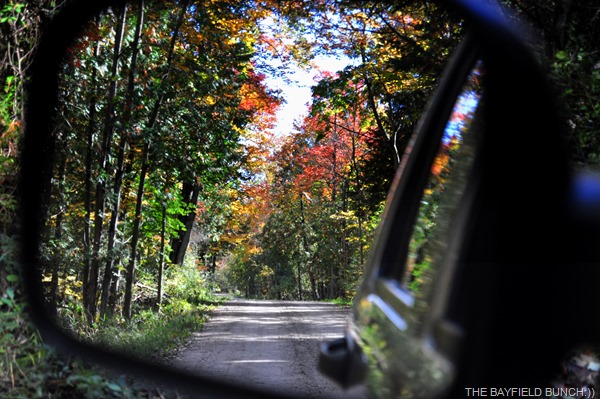 A REAR VIEW LOOK BACK ON AUTUMN

Had to delete a comment in our Shout Box this morning due to it’s sarcastic & rude nature.    Sad that some people have to live their lives being vindictive like that. 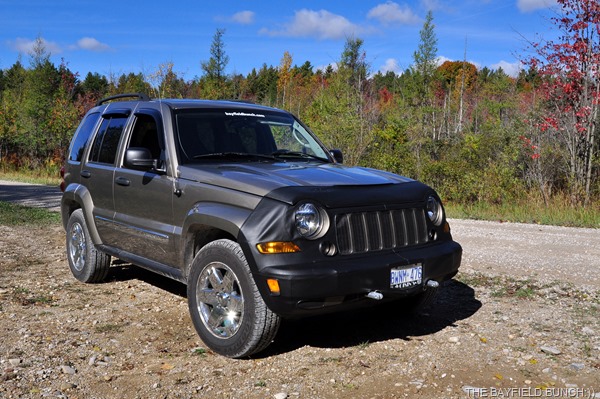 For today’s photos I switched back to my 2 camera method.  My Nikkor 70-300 still rattles & shakes before auto-focusing but I just think the pictures are sharper at telephoto ranges than my new Sigma 18-250 Sigma lens.  I like the Sigma lens for it’s overall convenience of not having to carry 2 cameras with 2 lenses.  The Sigma has a nice weight & feel to it but it has something I read about & don’t like.  It’s called ‘lens creep’ & that simply means when the camera is pointed down the the lens creeps out to full telescopic.  There is a lock button on the lens to prevent it from doing that but no matter, I just do not like the lens barrel extending itself out full length whenever the camera is pointed down.  It’s too easy to forget to switch the ‘lock’ button on or off & for someone like me who is quick on the trigger trying to catch a flying bird or darting animal that locking or un-locking a lens is a PITA!!  Like most anything there are always pros & cons & as in many cases you get what you pay for & in this case I simply could not afford the much higher priced comparable Nikkor lens.  Bottom line……….Despite a few cons still do like the versatile Sigma lens:))

FARMER’S ARE BUSY IN THE FIELDS NOW HARVESTING CORN

With it being such a nice day & me feeling good because of the nice day I came home with 185 photos today.  104 in my Nikon D90 & another 82 in my Nikon D3100.  The landscape was looking so beautiful I just couldn’t keep my finger off the trigger & after editing each & every one of my 185 photos late this afternoon I ended up with an acceptable 137 pictures.  Majority of my photos were rural barns which I have already upload to my OLD BARNS albums.  I wanted to push that album count to over a thousand & I succeeded in doing that today.  I may at some point in the future break that large barn album down into a series of small ones.   I sure do love my photography hobby:)) 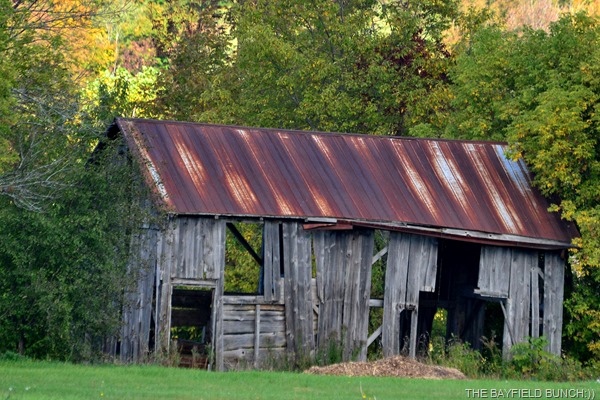 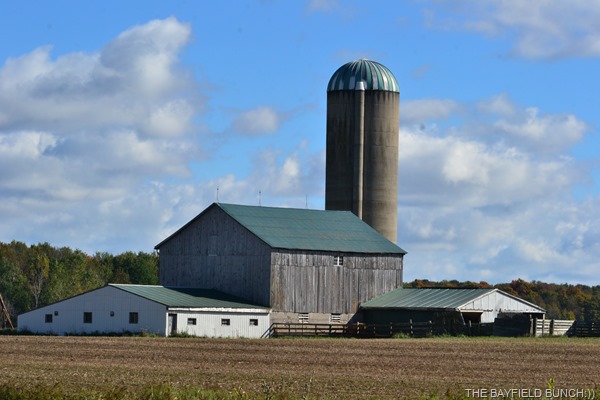 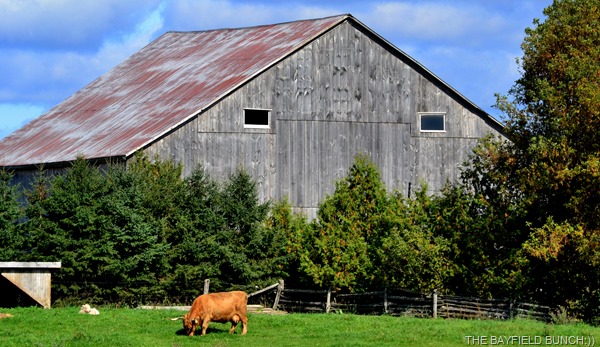 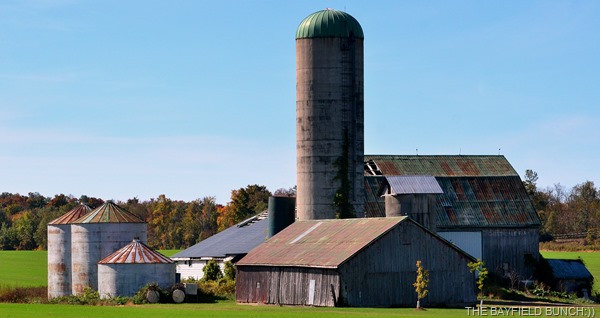 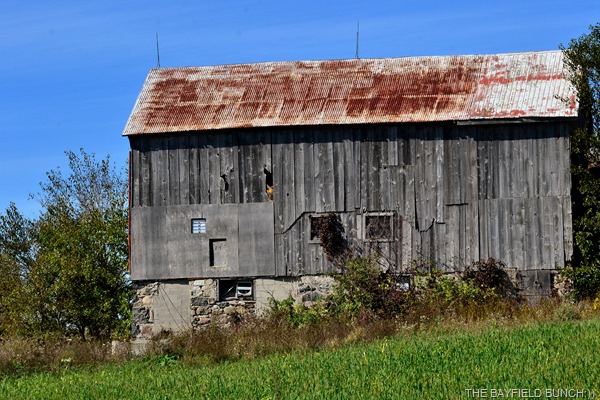 Pheebs & I eventually wound our way around through today’s Autumn scenery to the town of Wingham coming in from the north end.  Pheebs new right where Subway was located so we headed straightaway downtown & dropped in for a 6” Ham sub with all the fixins.  We scarfed it down in the parking lot knowing we would have sub sauce, tomatoes, swiss cheese lettuce & green peppers all over the place if we didn’t.  Well we sorta did anyway but did manage to keep it off the steering wheel this time.  From Wingham we pointed Libby’s nose in the direction of home & about an hour later we rolled into our driveway after another mighty fine 5 hour jaunt around this big beautiful rural countryside of ours.  Definitely my idea of a great way for a man & his dog to spend some quality time together:)) 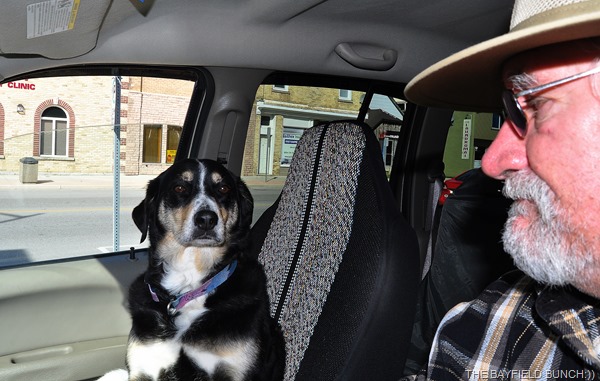 Oh, & what great culinary delights did I come up with for supper tonight you ask.  Well I started off with a very scrumptiously thick peanut butter & honey sandwich.  Chased that down with a big bowl of Mini-Wheats cereal mixed with a generous helping of Harvest Crunch & sprinkled with Honey Nut Cheerios.  And how about dessert??  Well that concoction of cereals actually was not only my main course but it was my dessert as well:))

Decided to put together a Live Writer album of a few photos I took Friday night at Bayfield’s Pioneer Park because I had too many to fit into the blog.  Watch for the guys jumping off the pier into Lake Huron with their surf boards.

To use the 'Slide Show' option open the album then double click the first photo.  Screen appears with photo enlarged against a black background.  Move your mouse around a bit & look to the top left corner to where it says ‘Play slide show’.  Click on that & away you go:))

GROANER’S CORNER:(( A Swiss man, looking for directions, pulls up at a bus stop where two Americans are waiting.  "Entschuldigung, koennen Sie Deutsch sprechen?" he asks. The two Americans just stare at him.  "Excusez-moi, parlez vous Francais?" he tries. The two continue to stare.  "Parlare Italiano?" No response.  "Hablan ustedes Espanol?" Still nothing.  The Swiss guy drives off, extremely disgusted. The first American turns to the second and says, "Y'know, maybe we should learn a foreign language."  "Why?" says the other. "That guy knew four languages, and it didn't do him any good."