5 PEOPLE GO FOR A ‘FIRST TIME EVER’ RIDE IN A MOTORHOME:)) 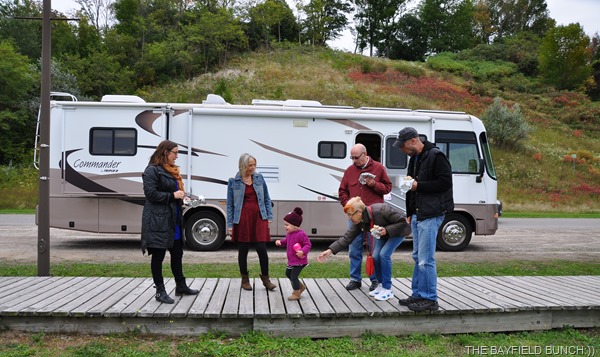 Here in our 5 Seasons Park it is not so much Autumn leaves we have to deal with as it is Autumn pine needles & they sure have been coming down these past few windy days.  Soon our roads & grounds will be covered in a blanket of golden needles.  Cold & windy today & it's feeling more like mid November weather than early October.  About 48F at noon today. 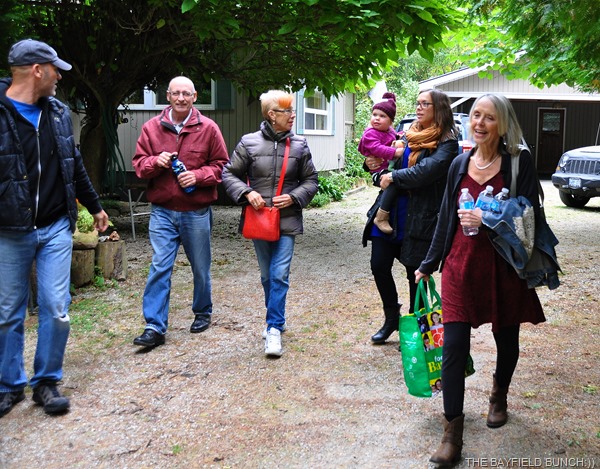 HERE COMES THE GANG DOWN THE DRIVEWAY FOR A RIDE IN THE BIG EEE…..L to R RICARDO, HIS DAD MANUEL & MOTHER NELLIE, LITTLE ELLA & HER MOM REBECCA & OF COURSE KELLY WITH HER HAPPY SMILING FACE:)) 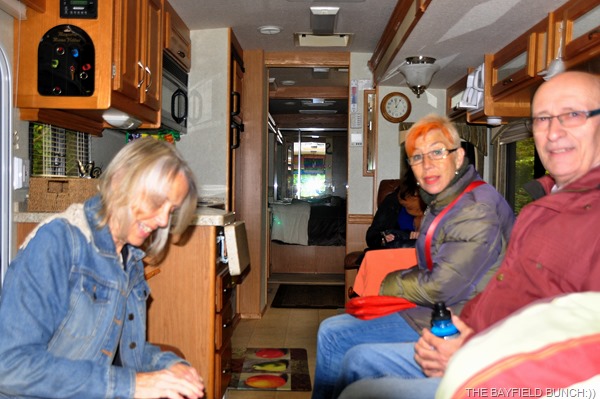 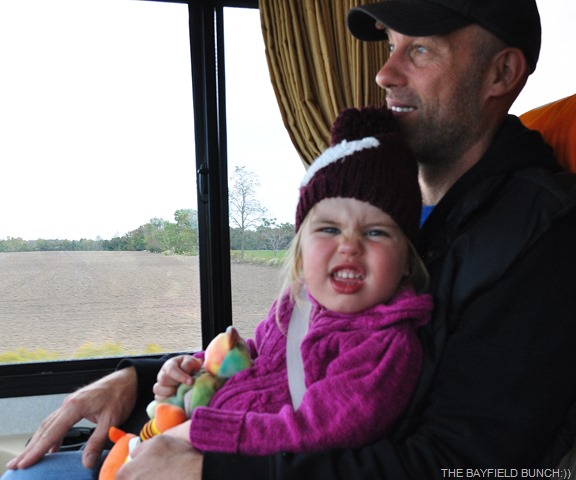 ELLA WANTED TO DRIVE BUT HER DAD WOULDN’T LET HER SO SHE GAVE ME A FACE:)) 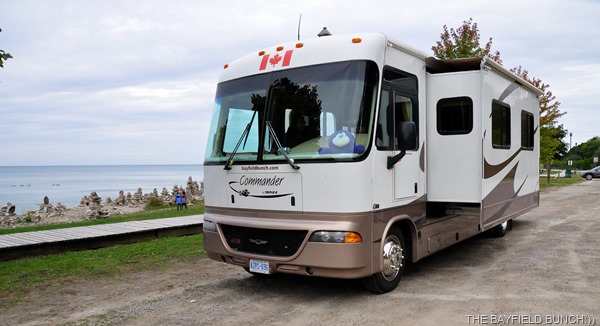 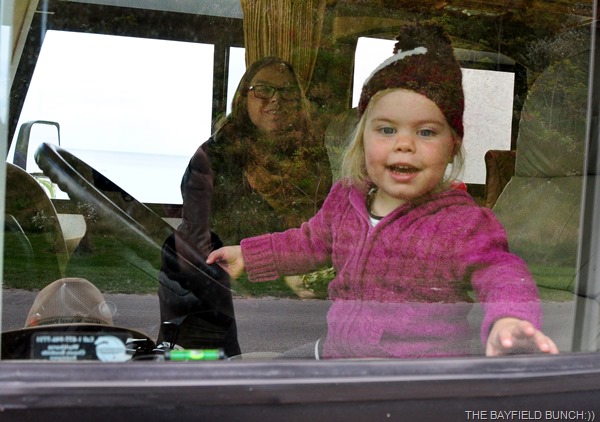 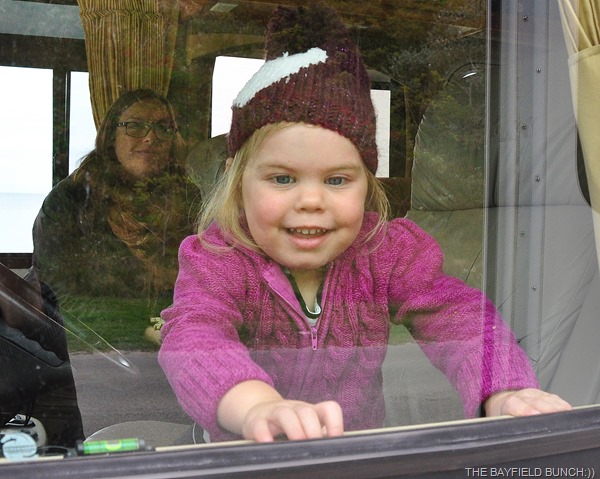 Our company which consisted of Kelly's daughter Rebecca, husband Ricardo & daughter Ella along with Ricardo's parents from Spain arrived about noon.  Nellie & Manuel do not speak a word of English but luckily Ricardo speaks Spanish, English, & a couple other languages fluently.  Rebecca is good with languages as well having taught English as a second language in Japan & Spain years ago. 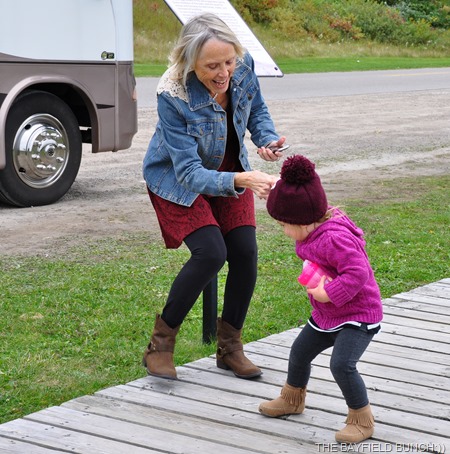 <<< COULD THIS BE KELLY & LITTLE ELLA DOING THE BOOG-A-LOO ON GODERICH’S BOARD WALK ALONG THE BEACH>>  NOPE, ELLA’S JUST HELPING GRAMMA KELLY UP ONTO THE WALKWAY

Rains were not due to arrive until mid-afternoon so that allowed us some time to take a drive up to Goderich in the Motorhome.  None of the folks had ever ridden in a Motorhome before so it was quite an experience for them.  We headed for the harbor & beach area showing them the large Sifto Salt mine & luckily there was a large freighter in the harbor loading grain for them to see as well.  We drove down to the Inukshuk area, parked, & put the slides out for the gang to eat some sandwiches they had brought along.  They were all quite impressed with the Inukshuks.  From the beach we rolled the Motorhome up from the harbor & into downtown Goderich taking a couple turns around the square.  Needed some gas in case we had to run the generator a few times over the next couple weeks so picked up some fuel in the south end of Goderich before heading back to Bayfield.  Our company is staying in one of Deer Park Lodge's cabins & will be heading back to Guelph Ontario Sunday.  Ricardo’s parents who are here for a month told him today it is this Bayfield/Goderich area they like the best so far. 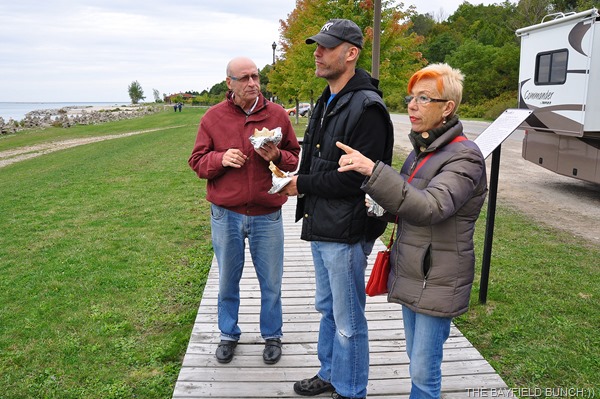 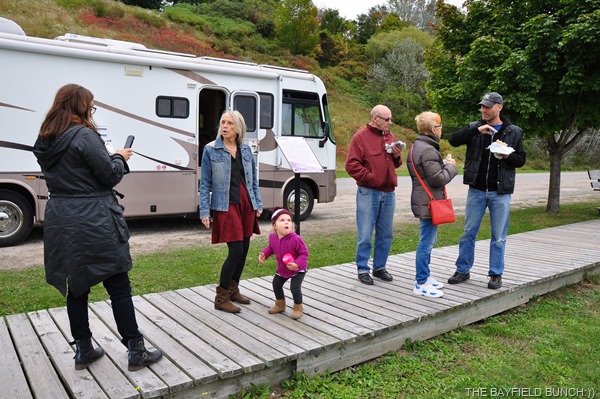 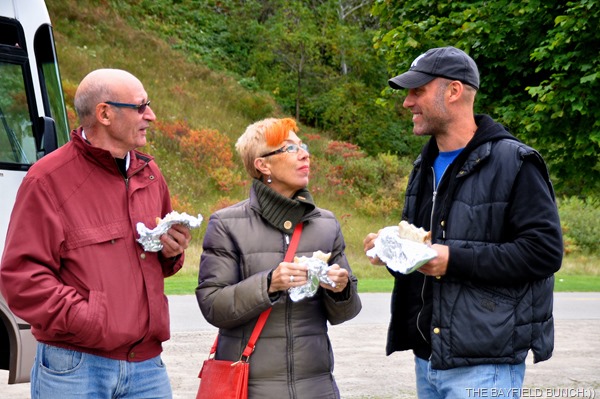 LUNCH ON THE BOARDWALK 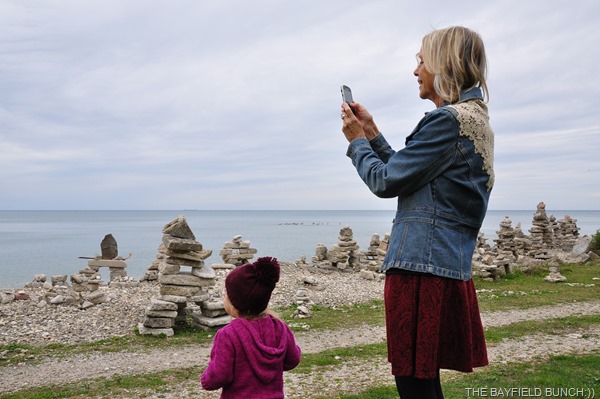 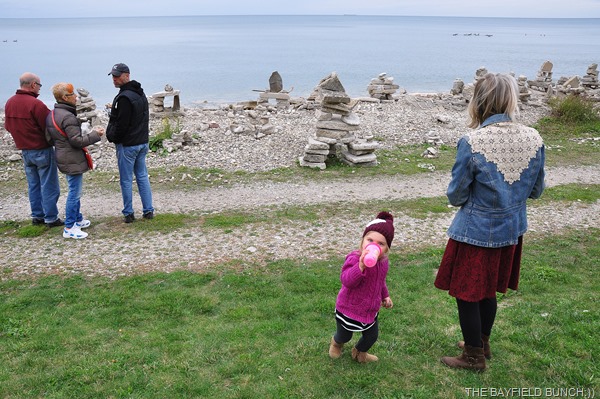 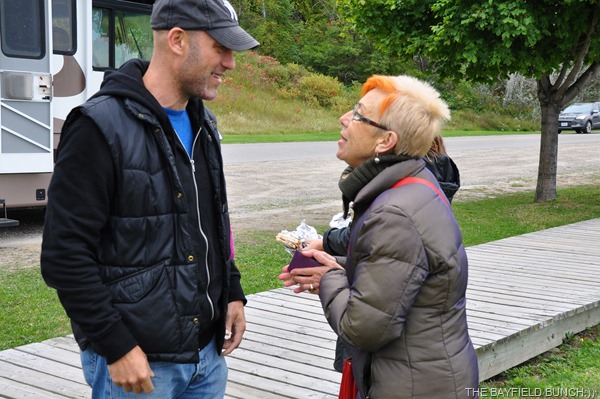 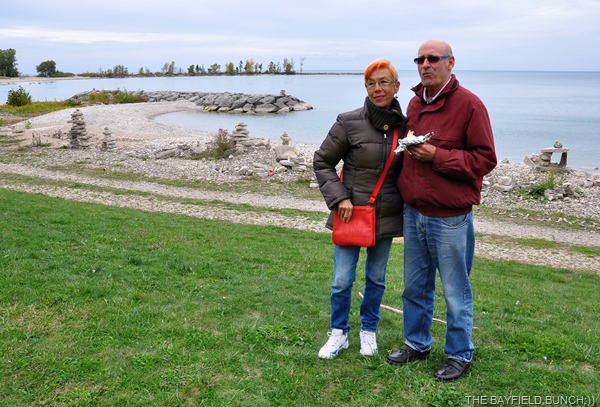 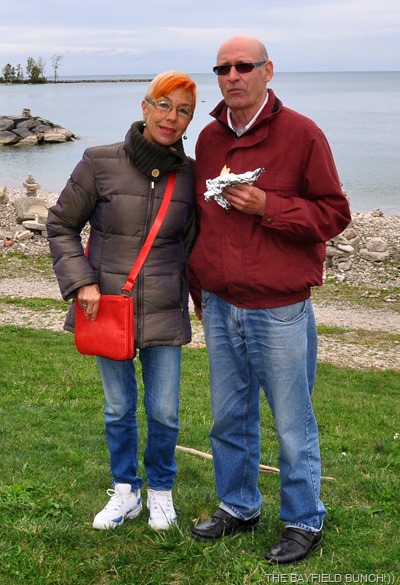 Rebecca, Ricardo, Nellie, & Manuel headed over to check out their cottage at Deer Park while Ella stayed with Kelly & I having herself a big afternoon snooze.  Later in the afternoon under cold rainy skies the whole gang of us headed over to the DOCKS RESTAURANT for supper.  I debated with myself whether to go or not.  Last time there a few weeks ago the overall noise had me just about climbing the walls but then again it was still tourist season plus it was a week-end Saturday night.  Nothing wrong with the Docks or their food, it’s just me.  It’s funny how noise has become such an intolerance for me over these past bunch of years.  Oh well we all do change a bit as we age I guess……… 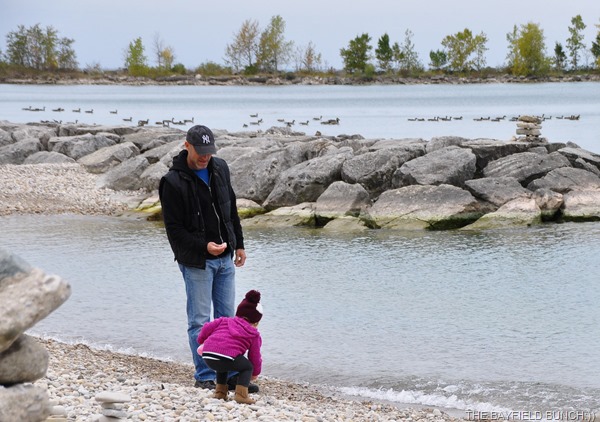 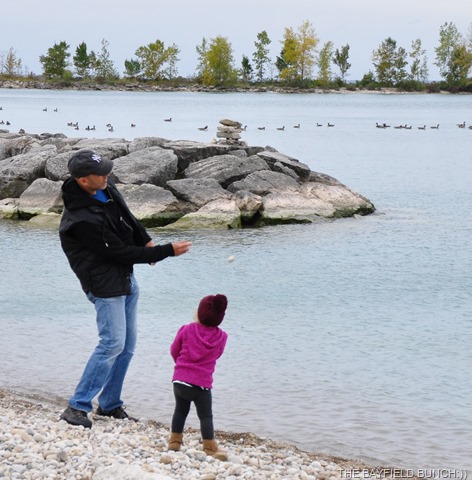 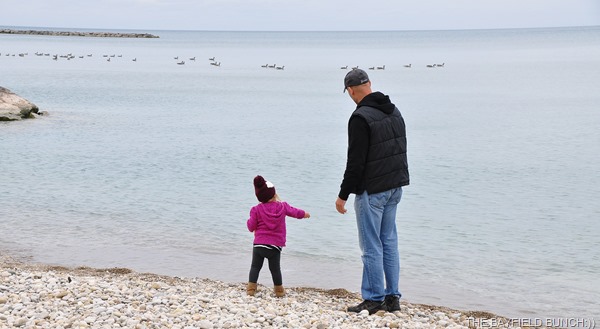 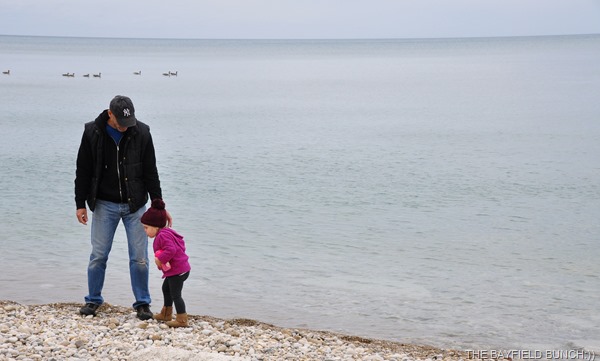 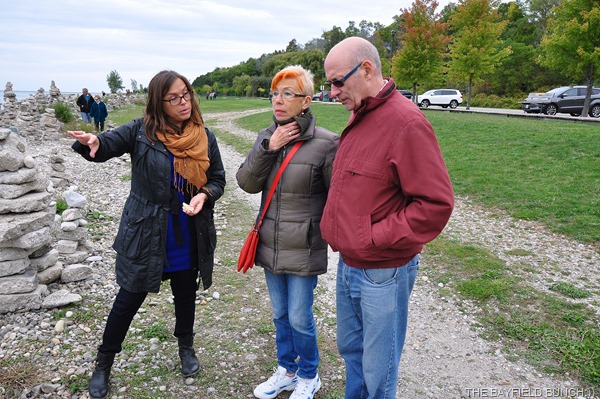 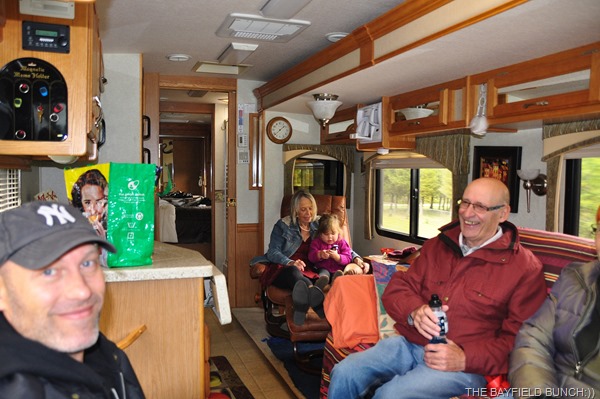 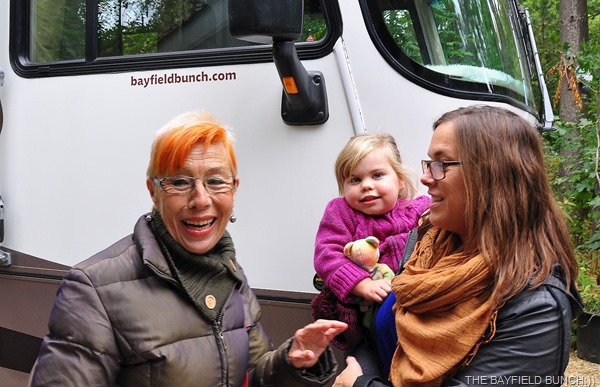 LOVED THE RIDE IN THE MOTORHOME & A GOOD TIME WAS HAD BY ALL:)) 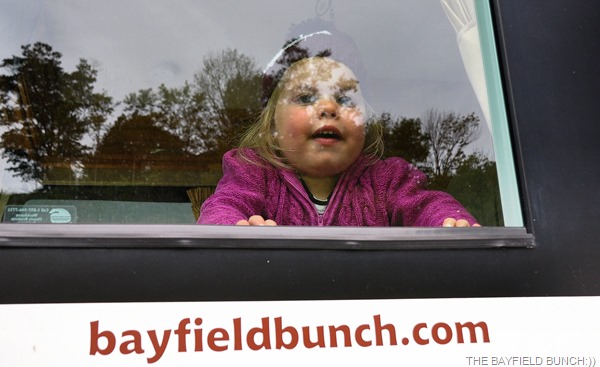 GROANER'S CORNER:(( At breakfast one day, I eagerly waited for my husband to comment on my first attempt at homemade cinnamon rolls.  After several minutes with no reaction, I asked, "If I baked these commercially, how much do you think I could get for one of them?"  Without looking from his paper my husband replied, "About 10 years."