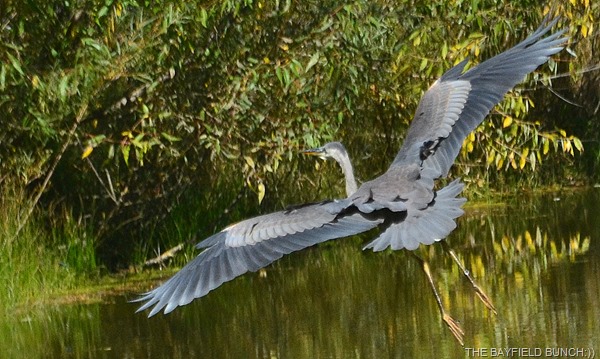 A GREAT BLUE HERON LIFTS OFF OUR PARK’S POND

Sure miss the easy way Windows 97, XP, & 7 let me put icons on my desktop.  I much prefer easy to access desktop icons to the ‘Favorites’ feature but Windows 10 has seen fit to make that a big long drawn out procedure now which I’ve never had the patience to figure out.  Overall, we still like Windows 10 though & so far so good.  Hardly seems much different than Win 7 although it does have new features which I’ve taken little interest in so far.  Haven’t felt a need to have Cortana talking to me.  And apps schmapps who needs em anyways. 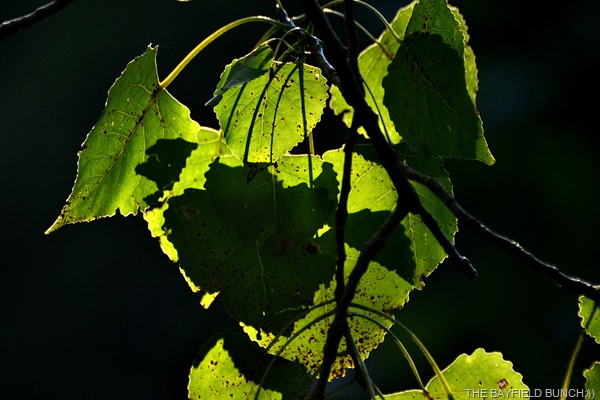 CAN YOU SEE A LITTLE PUPPY DOG FACE HERE??

Our wonderful Autumn weather continues to weave it’s mystique & today was just another one of those magical days.  Hard to explain but it is a time of year like no other filling some folks like myself with many pleasant reflective moods & memories.  These truly are natures wondrous days.  Actually our weather right now reminds me a lot of winter in the South-west.  Cool air & warm sun.  As I do in Arizona I am now switching into a warm T-shirt & long sleeve flannel shirt about 4 in the afternoon.  And that is my same attire in the morning until about 10 a.m.  Between 10 & 4 it is short sleeve shirt weather.  Very much like the South-west depending on area & altitude of course. 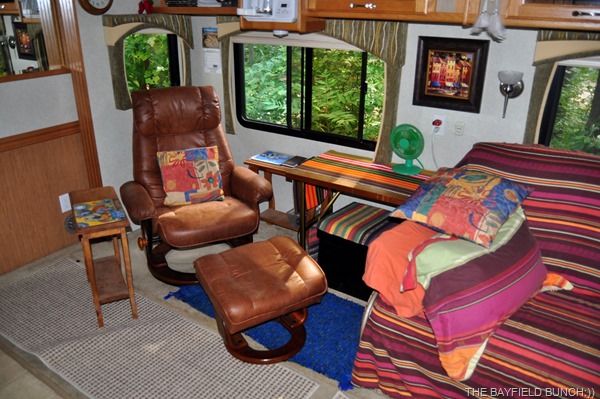 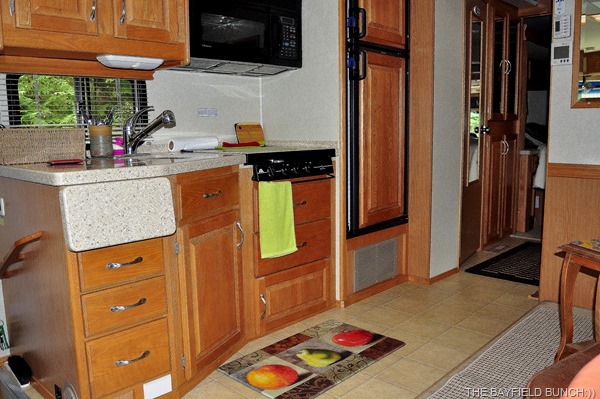 We spent some more time in the Motorhome this afternoon just getting a feel for our slightly modified floor plan.  Kelly also tackled the job of cutting out & putting a frosted glass laminate type of covering on our rig’s door window.  It had been a clear see through pane of glass.  It comes off easy if we don’t like it.  There is a blind that comes down over the window but I’ve never liked it.  Going in & out it always knocks my hat off. 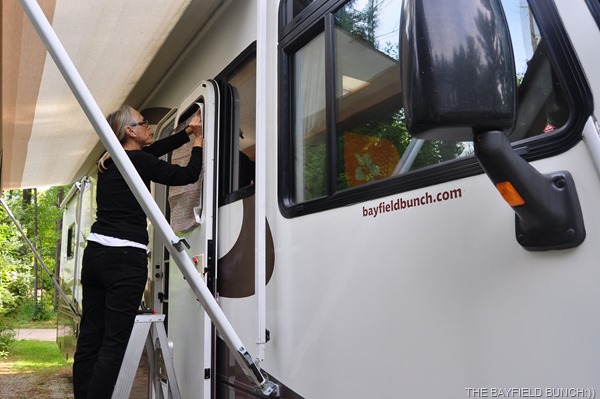 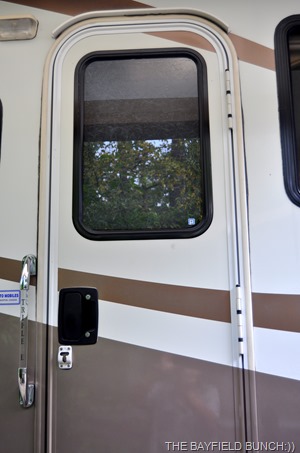 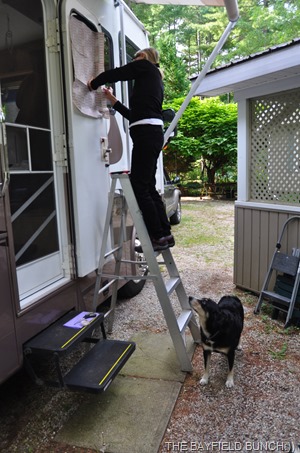 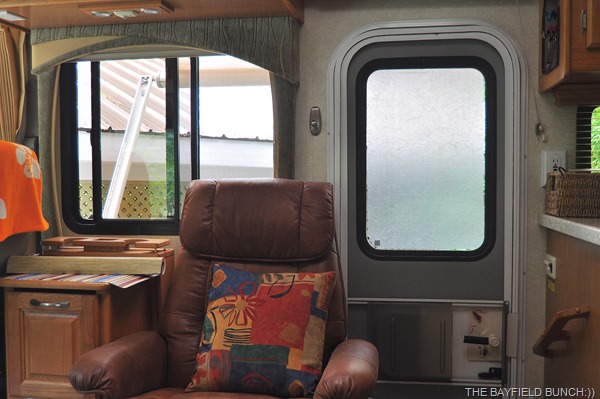 With darkness upon us much earlier each night now I thought I’d try for a Moon shot from our driveway Wednesday night.  Problem is all the pine trees overhead & with both the Earth & the Moon on the move I only managed one decent shot before the Moon was once again shrouded by numerous pine needles & there’s no point in moving the tripod & camera to another spot because it’s just pine trees everywhere here around our house. 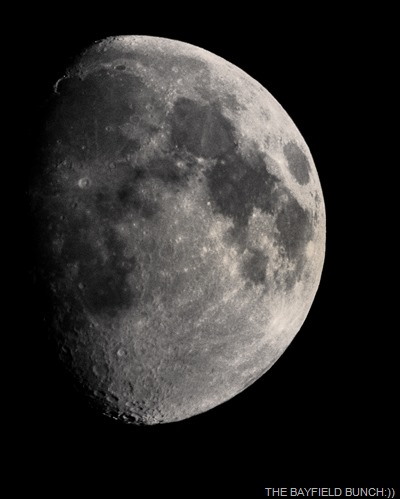 Amazingly enough I actually remembered I had to have our Jeep Liberty into Clinton’s HURON TIRE & AUTO this afternoon at 2 for a rear tire replacement.  Number 2 bay was open & the new tire was sitting there all ready to go.  They were at it right away & the job was done in no time flat.  The tire coming off Libby was better than the spare on the back so that was taken care of as well.  My total time in & out the door was about 20 minutes.  Now how mighty darn nice is that eh:)) 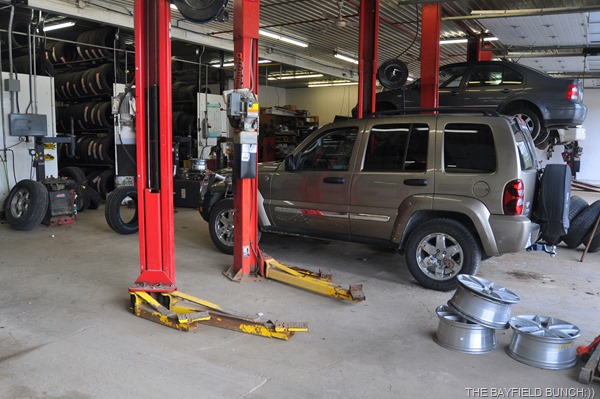 NEW TIRE WAS SITTING THERE WAITING FOR ME 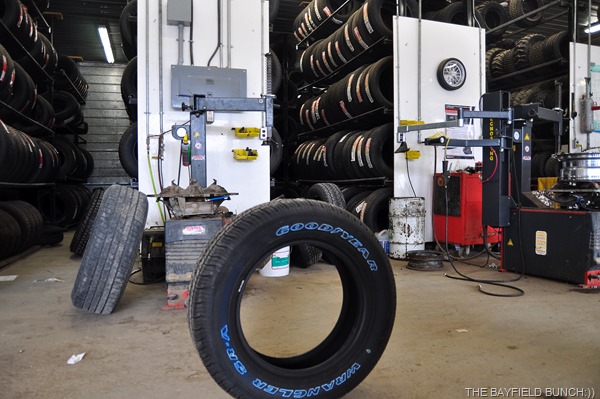 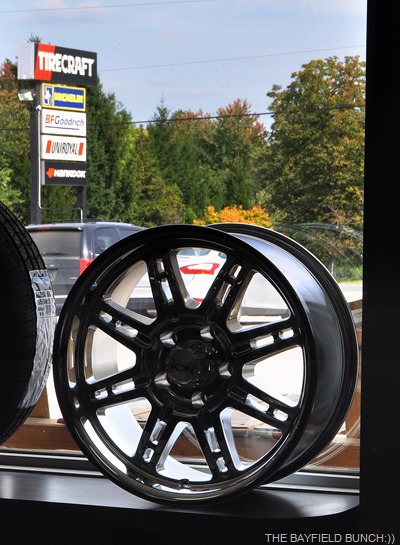 We sanitized our fresh water tank in the rig this morning & again it was one of those operations that required 2 of us.  One to read the instruction book & the other to physically turn the right knobs & leavers in sequence.  For Full-Timers who routinely do this it is no problem to remember the procedure but Snow Birds only doing this maybe twice a year it can be aggravating trying to remember how you did it last time.  Contributing to that aggravation is the age factor of course & it’s ravages on short & long term memories.  Silly me thought he remembered how to do it so last week while Kelly was in Spencerport I thought I’d give it a try.  Well you know what thought did, right.  Needless to say my effort was a bust so this morning knowing Kelly was in the house I tried it again.  Well I wasn’t even close to getting things right so of course I had to enlist Kelly’s help & between the two of us with Kelly reading the manual & me turning the neighborhood air blue again we finally figured it out.  We’ve had 4 different RV’s in the space of 3 years & each RV has had a different way of doing things so that compounded our overall confusion as well.  Ok, Ok, MY confusion.  I remember going through this same procedure once before with the Big EEE & thinking to myself, ‘well that was pretty easy & I’m sure we’ll remember how to do it next time.  We didn’t!! 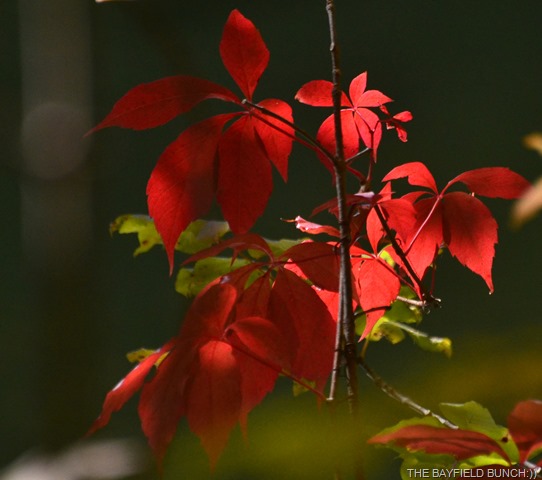 Pheebs & I just might have to take that new P235/65R17 Goodyear Wrangler S-RA tire for a spin in the morning.  Well that is if I feel like it.   For some reason I’ve noticed I’m not quite as eager to get out into the countryside these past few days or so & I’m thinking it might have something to do with knowing we’ll soon be leaving on a much longer journey.  Not sure how those two thoughts are connected but I have noticed a slight shift in my morning enthusiasm as of late.  In reality I’m probably beginning to tire a wee bit of travelling the same old country roads so often week after week.  Yes I could travel further afield but I feel a little guilty all the time about the gas I burn up & Jeep Liberty’s are not known for their superb gas mileage.  Always something huh……………………………. 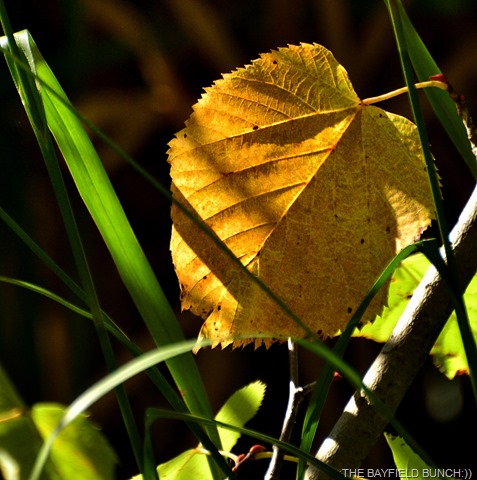 GROANER’S CORNER:((  Sandy began a job as an elementary school counsellor and she was eager to help. One day during recess she noticed a girl standing by herself on one side of a playing field while the rest of the kids enjoyed a game of soccer at the other.  Not being too familiar with sports Sandy approached and asked if she was all right. The girl said she was.  A little while later, however, Sandy noticed the girl was in the same spot, still by herself.  Approaching again, Sandy offered, "Would you like me to be your friend?"  The girl hesitated, then said, "Okay," looking at the woman suspiciously. Feeling she was making progress, Sandy then asked, "Why are you standing here all alone?"  "Because," the little girl said with great exasperation, "I'm the goalie!"