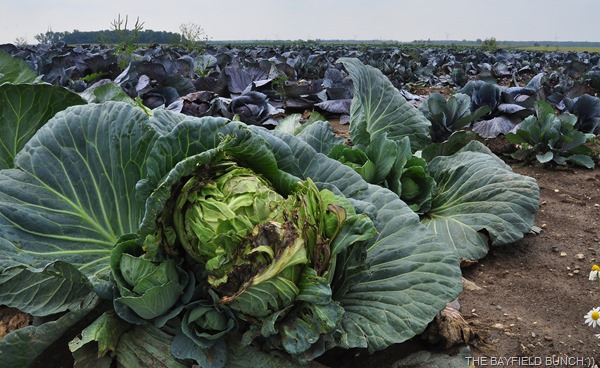 HEY SOUTHERN CALIFORNIA’S GOT NOTHING OVER ON SOUTHERN ONTARIO WHEN IT COMES TO CABBAGES…..YOU CAN ACTUALLY SEE A NEW CABBAGE PATCH DOLL BEING BORN HERE

Overnight rains quit around 8 this morning & Kelly was on her way to Spencerport New York one hour later under partially clearing skies.  Looked like she might be in for clear sailing all the way but turns out some rain caught up with her near Woodstock.  She plans to be back next Wednesday or Thursday & I think that will be just about the longest we have been apart in about 22 years.  Oh Dear, now I'm going to have to make my own morning coffee.  That is if I make it all.  Hardly seems worthwhile when I only drink half a cup anyway.  We'll see how I feel about that in the morning. 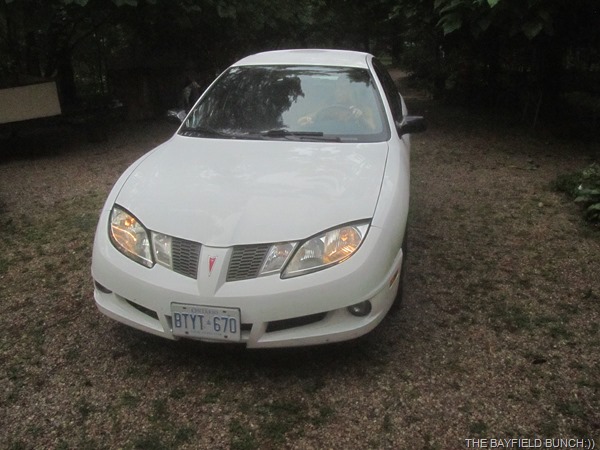 JUST ABOUT READY TO GO THIS MORNING 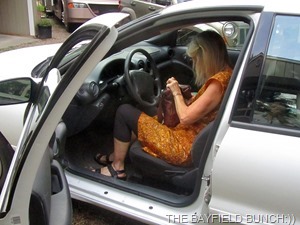 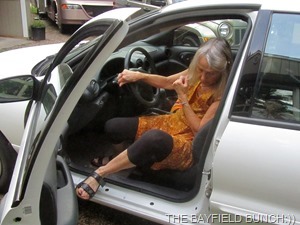 OH-OH THINK SHE MAY HAVE FORGOT SOMETHING……YES SHE DID, HER IPOD 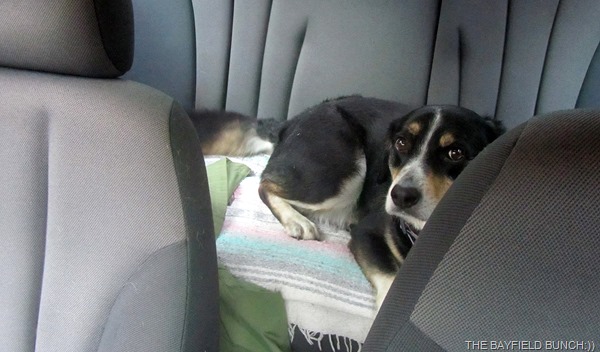 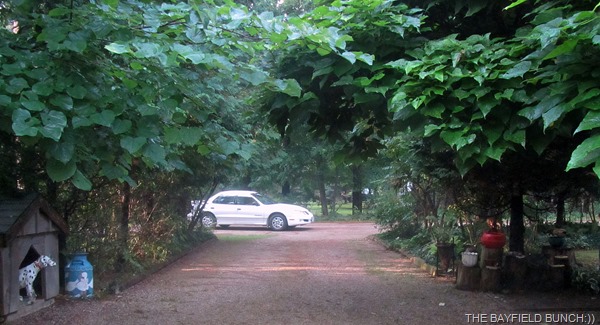 BYE BYE SEE YOU NEXT WEEK

My first dilemma popped up minutes after Kelly left when I thought to myself, 'well what am I going to do all day now'.  Everything's too wet outside to do anything plus it's still  uncomfortably humid so our only recourse is to fire up the Jeep & go see if we can find us some interesting photos for the day.  Sitting around the house doing basically the square root of nothing was not an option & besides I saw a few rays of sunshine poking through the trees. 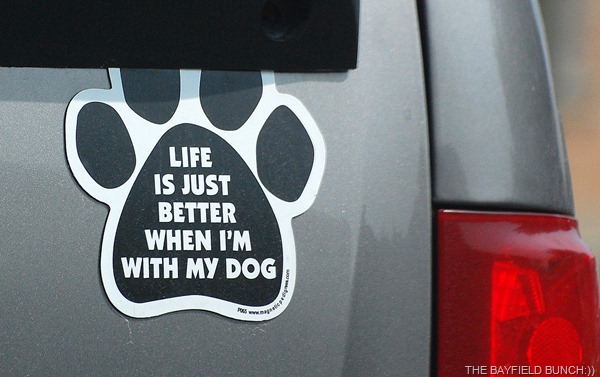 SPOTTED THIS ON THE BACK OF A PICK-UP TRUCK THIS MORNING……….YEP IT SAYS IT ALL & I GOTTA GET ME ONE OF THOSE STICKERS

Undecided where to go we just headed out of the forest in the direction of Bayfield.  So much for those few rays of sun I had just seen.  Clouds were looking ominous & sure enough minutes later cruising Bayfield's main street down came the rain & that was the end of that & headed back home.  Preparing to be stuck inside all day I checked our email.  Monday I had dashed off an email to HENRY'S CAMERA SHOP in London about the vibration in my 70-300mm Nikkor lens & checking the email I saw they had replied saying, 'bring the lens to the store & they would have a look at it'.  WALLA....Pheebs & I had our destination for the day & minutes later we were in the Jeep headed for London Ontario. 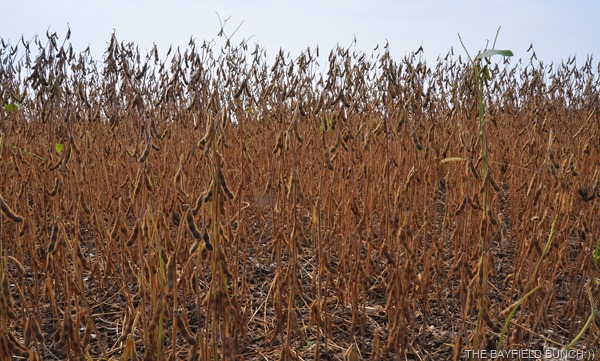 NOTICED SOME AREA BEAN FIELDS ARE READY FOR HARVESTING 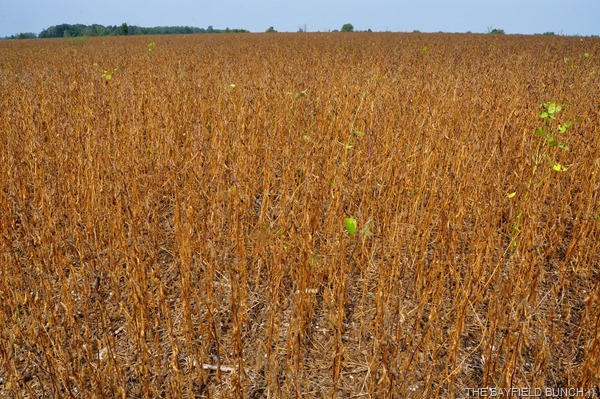 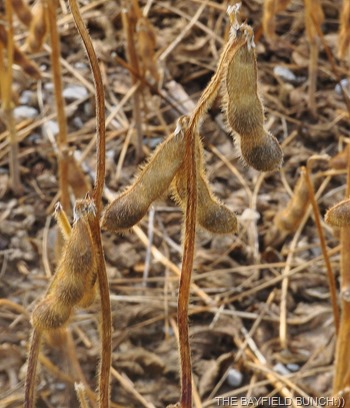 Rain had ended & skies began slowly clearing after all as we made the hour's drive to the North end of London.  Couldn't believe how hot & humid it was there compared to Bayfield.  Didn't take the fellow at Henry's long to determine that yes the lens should definitely be sent to Nikon for repairs.  I figured that was the best thing to do until I was told 2 things.  First, Nikon charges a flat fee of $250 to look at the lens.  If the lens can be fixed for less than that then that is the charge but as the clerk told me it could very well be over the $250 fee in which case I would have to pay the $250 plus repair.  A new 70-300 lens can be head for $526.00.  Well now what to do?  I asked how long it would take to repair the lens & was told it could be anywhere from 4 to 8 weeks.  WHAT!!!!  Didn’t want to take the chance of heading for Arizona in 6 weeks without my favorite lens.  Well that was that & I made the decision right then & there to just hang on to my lens & keep using it until it becomes unusable which could be tomorrow or 6 months from tomorrow or maybe not ever but that is highly unlikely.   Took a bunch of barn photos on the way home with it & it shuddered maybe 10 out of 50 shots.  Turns out all photos taken with it still remained sharp but just in case I do have my 50-200mm lens warming up in the bull pen.

Sure was glad to get out of London & back into the countryside.  Picked up a Horton coffee & muffin in Lucan & under clear sunny skies we ambled our way along a bunch of country roads back to Bayfield adding another batch of barns to my files along the way.  A few leg stretching stops & with our A/C on full blast we were back home somewhere around 2 p.m.

SPOTTED A COUPLE CROP DUSTING PLANES IN OUR TRAVELS

ANYTIME I SEE AN AIRPLANE I ALWAYS CONSIDER THAT A BONUS …..HAVE ALWAYS HAD A FASCINATION FOR THEM 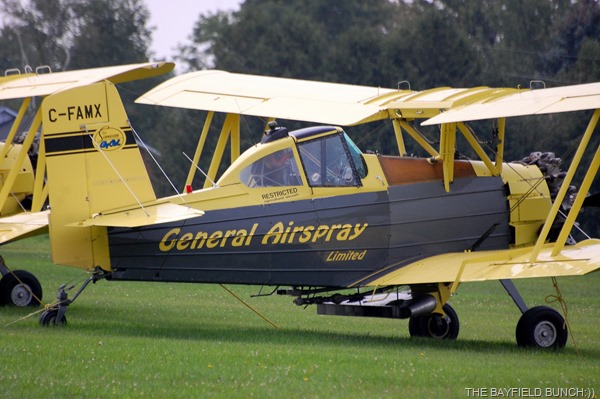 Liked this post on frugal-rv-travel.com by Cheri in New Braunfels Texas entitled, ‘Not what I expected’.  What I especially liked was Cheri’s honesty in talking about something that simply didn’t turn out to be what she expected.  She could have chosen not to write about it or glossed it over putting a ‘happy face spin’ on it all but she didn’t do that.  She talked about her thoughts & feelings & I always appreciate when someone is honest enough with themselves to write about how they really feel.  ‘Tell me your days aren’t perfect & I will understand & be your friend’. 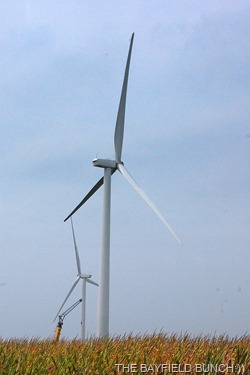 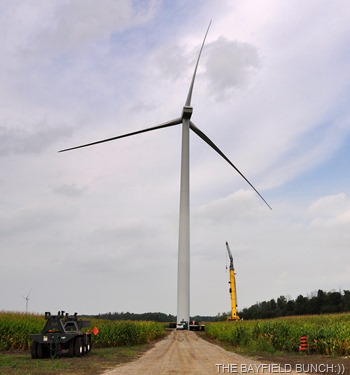 LOTS OF INFRA-STRUCTURE GOING UNDER GROUND IN THESE HERE PARTS

Ok what was for supper on our first home alone night.  Well nothing really, when by myself I have a tendency to nibble my way through the day.  Some cold Pizza, some cold chicken fingers, a peanut butter & honey sandwich, bowl of porridge this morning, a bran muffin & a cold hotdog wiener along the way.  See, I’m no slouch in the kitchen eh:)) 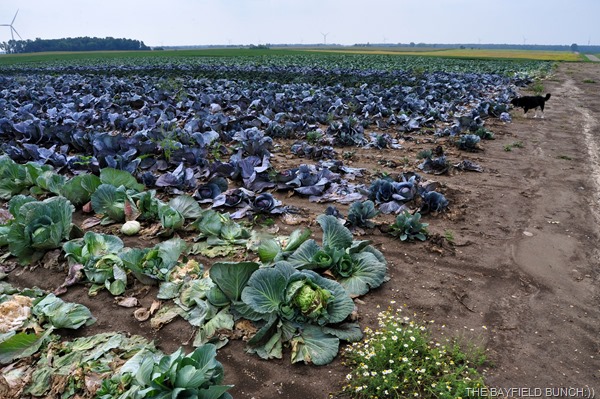 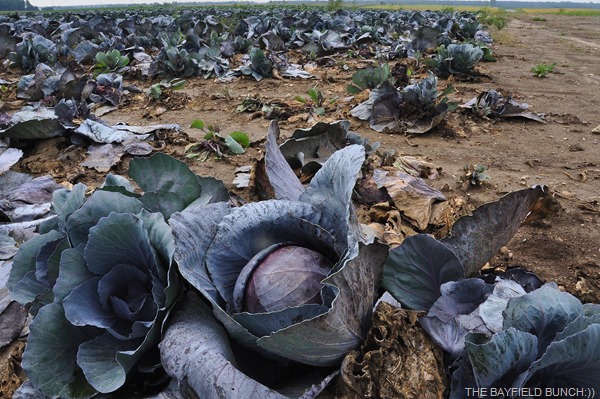 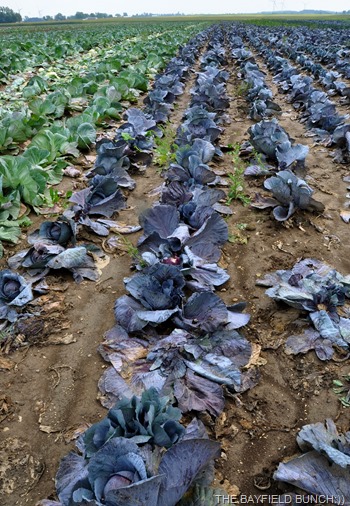 GROANER’S CORNER:))  One of tonight’s groaners comes in the form of a reader’s comment on my Monday night post.  Craig says……….Your barn pictures are wonderful.  Do you have any castles in Ontario, or perhaps immigrant nobility from Europe? If so, you could take some pictures of such/their properties, and intermix them with your barn pictures. Then you could call the resulting collection "Barns and Noble" :-)

My friend, the manager of a grocery store, nabbed a shoplifter in the act. He was escorting the suspect to the office in the front of the store (near the cash registers), when the shoplifter broke from his grip and tried to run.  After a scuffle, my friend pinned him against the wall and looked up to see a number of surprised customers staring at him.  "Everything's fine, folks," he reassured them. "This guy just tried to go through the express line with more than ten items."