FELLOW CANADIAN SOUTHWEST SNOW BIRDS DROP IN FOR A VISIT

A SUNDAY NIGHT WALK ON THE BEACH FOR PHEEBS & I

After spending most of Sunday under heavily overcast skies in our somewhat gloomy darkened forest I was happily surprised when checking Grand Bend's Yacht club web cam to see clearing skies out over Lake Huron.  Shortly after that I saw a few shafts of sunlight making their way through our pine tree canopy.  Totally needing a happy sun fix I took Pheebs for a drive out the east end of our park into the glorious sunlight.  Circled around a couple country blocks soaking up that happy feeling & headed back into Bayfield for a drive-thru.  Shortly after that we had ourselves walking on Deer Park Lodge's beautiful sandy beach taking a few more sunset photos for a second night in a row:)) 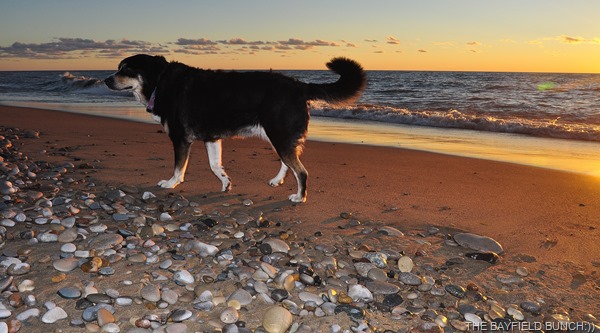 PHEEBS LIKES THE BEACH AS LONG AS SHE DOESN’T GET WET…..I’M KINDA THE SAME WAY 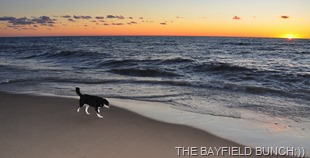 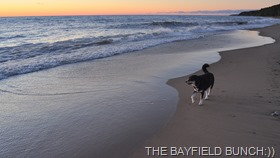 SHE IS BEING VERY CAREFUL NOT TO GET THOSE PAWS WET 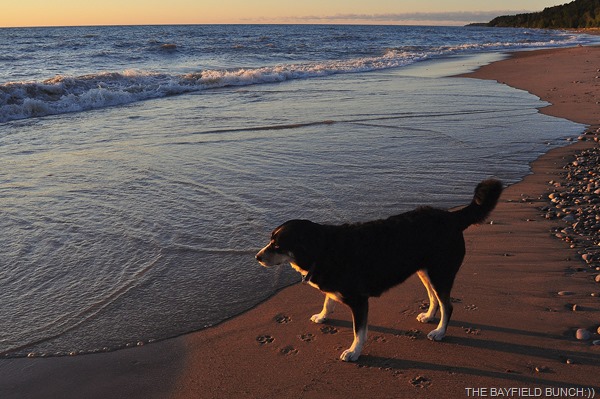 Our day dawned bright & clear so Pheebs & I headed straightaway to the Hullett-Marsh again.  Not a cloud in the sky & it was just the finest early Autumn day imaginable.  Hiked us into an area that is usually under water.  With the many dykes in Hullett all ponds are water managed & it appears the area we walked in this morning was drained probably late last year.  It’s all lush & green now with tall thick grasses & the night’s heavy dew had me wet from the knees down & Pheebs wet from the paws up.  Next summer this whole area could be under water again. 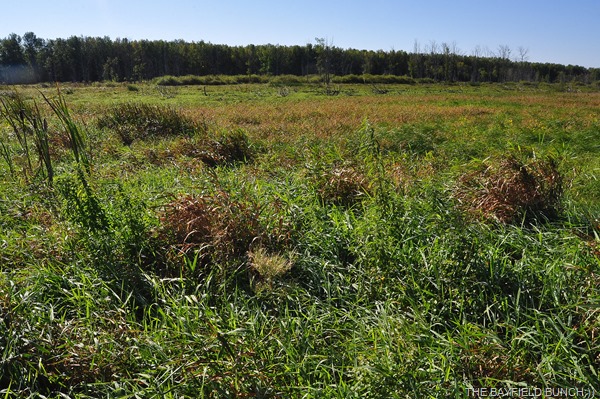 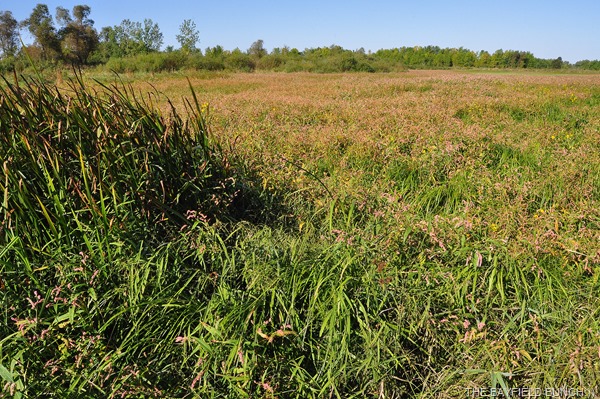 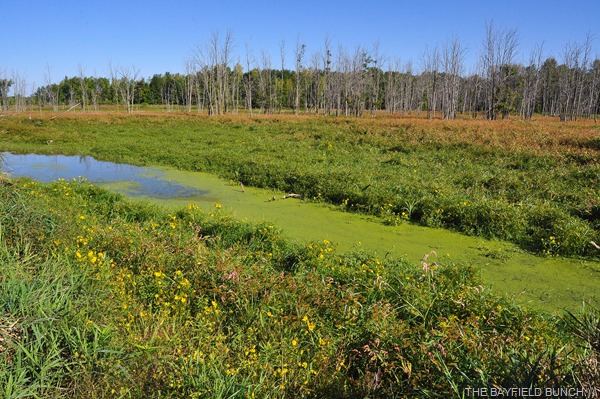 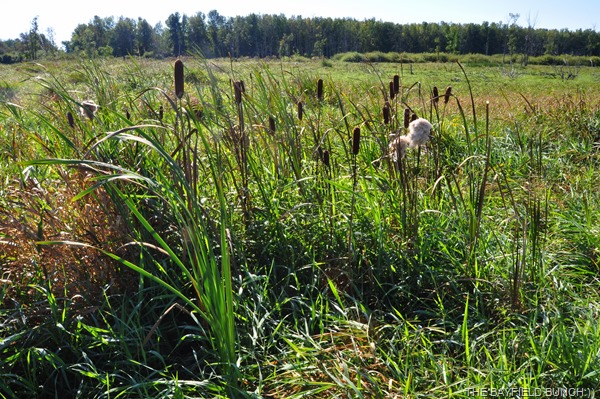 WE SURE HAD TO SLOG THROUGH SOME LONG GRASS HERE 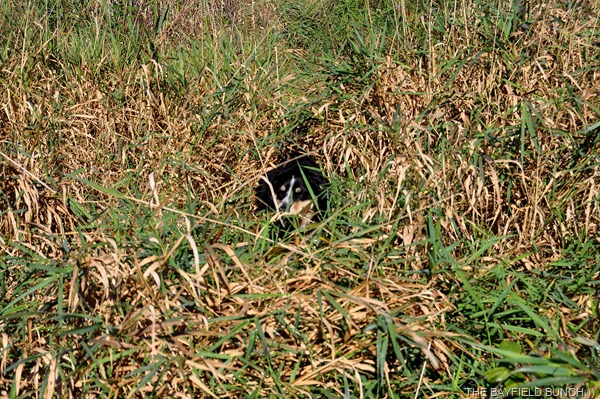 REMINDS ME OF AN OLD SONG…..’COMIN THRO THE RYE’ 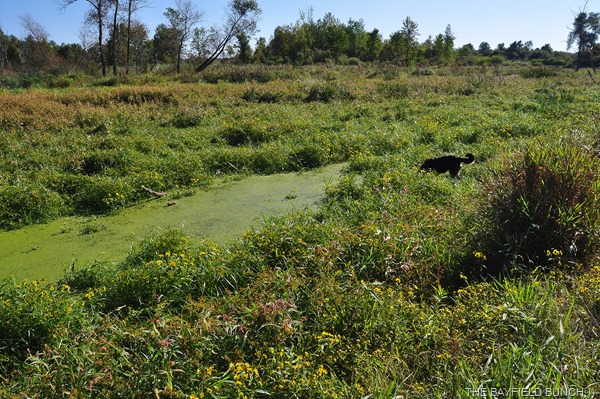 No long drives this morning & we were home before 11.  Had received an email from fellow RV’er’s & seasonal Bloggers Chris & Caron from TRAVELS WITH CC & DIXIE on Sunday.  They are in our area & actually camped at the OLD HOMESTEAD RV & TRAILER PARK which is less than a mile from our house.  Emailed them saying Pheebs & I were back from our morning Safari & they bicycled right on over.  Took them for a ride in the Jeep around our Park showing them the layout.  They were curious to have a look at some of the units.  I’m going to pick them up tonight at 7 & we’ll do a little Bayfield tour & catch a sunset on the beach.  We had only met Chris & Caron one other time & that was 2 winters ago when they dropped in to see us in Congress Arizona.  Our paths have criss-crossed a few times out there in the wild woolly west here & there missing each other by just a day or two. 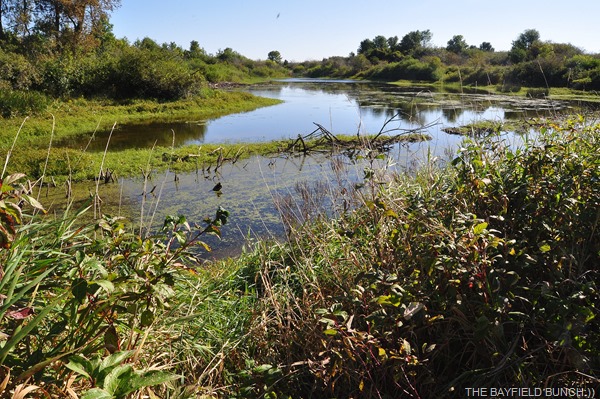 Spent a big chunk of my afternoon doing a bunch of catch up stuff around our front yard.  It’s that time of year & it was a perfect day to begin transplanting & moving Hostas around.  Trimmed up a lot of overgrown stuff I should have trimmed up months ago.  I even re-located our bird feeding station & added a taller post for better visibility from our computer station in the sunroom.  Say did I mention what a beautiful day it was:)) 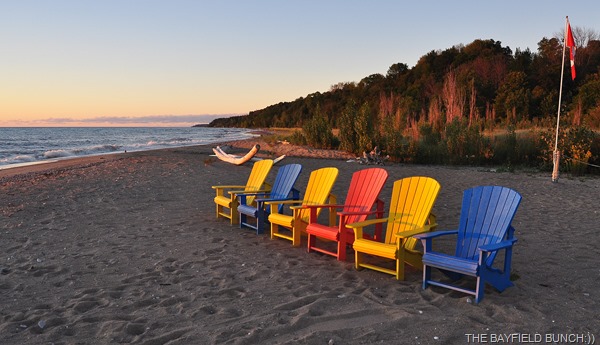 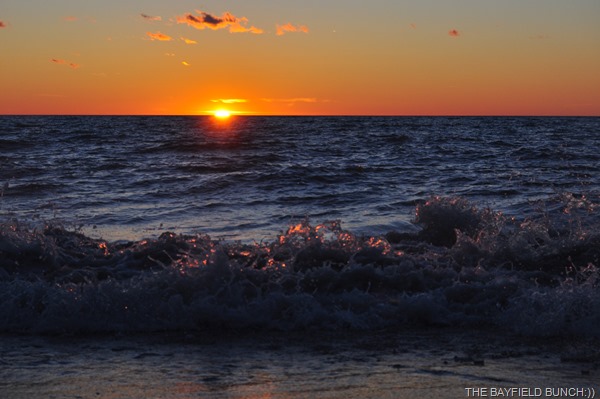 GROANER’S CORNER:((  Tonight We Have The Senior Citizens Alphabet::

B's for bad back

C's for the chest pains.

F is for fissures and fluid retention

I is for itches

J is for joints that are failing to flex

L for libido--what happened to sex?

Wait! I forgot about K for bad knees (I've got a few gaps in my M - memory)

N's for nerve (pinched) and neck (stiff) and neurosis

O is for osteo-

S is for sleepless nights counting my fears

T for tinnitus--bells in my ears

U is for difficulties urinary

V is for vertigo

W is worry about what the X--as in X ray will find but though the word terminal rushes to mind I'm proud as each Y - year goes by to reveal a reservoir of undiminished Z – zeal for checking the symptoms my body deployed and keeping my twenty-six doctors employed.