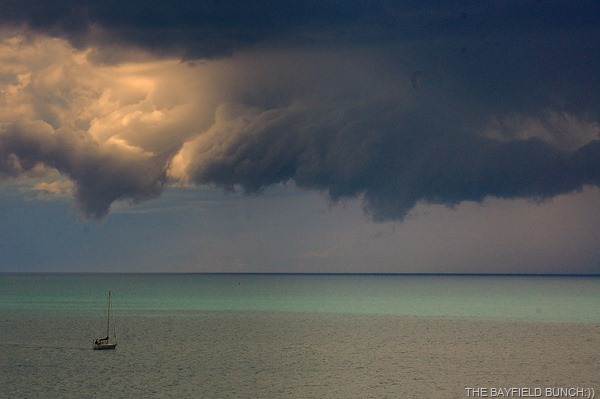 Aside from taking myself for a short toot on me motorcycle this afternoon there just wasn't much happening today.  Mowed the new lawn, whacked some weeds, washed some windows, half a utility load of yard waste to the recycling area & that was about it.  Well until I had a look at our computer’s weather map for our area that is & was surprised to see another storm cell heading across the lake in our direction.  Could tell it was not as severe as Sunday’s storms but grabbed my cameras & with Pheebs right behind me we jumped into the Jeep & headed for Bayfield’s Pioneer Park overlooking Lake Huron. 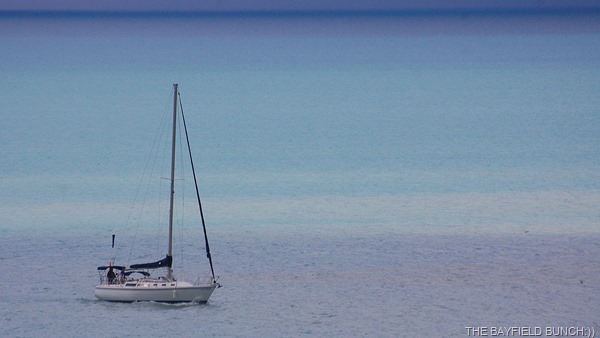 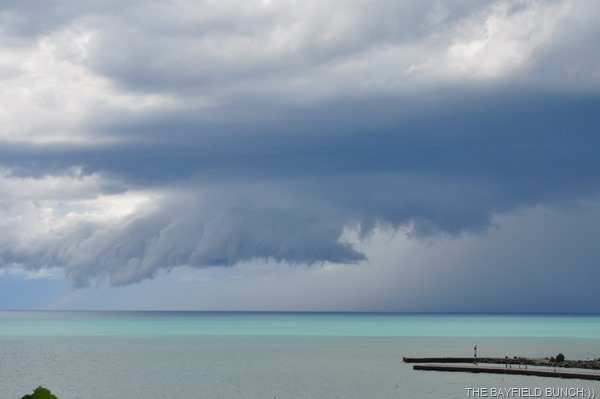 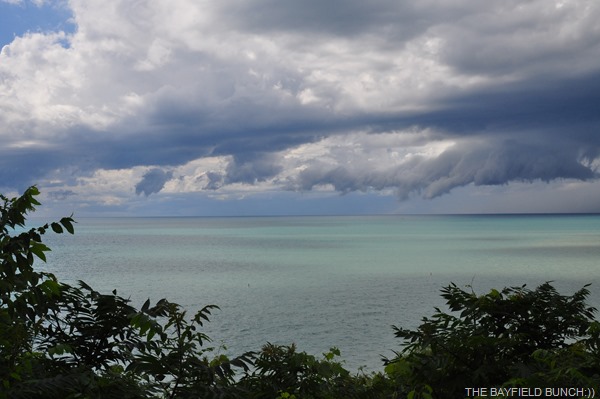 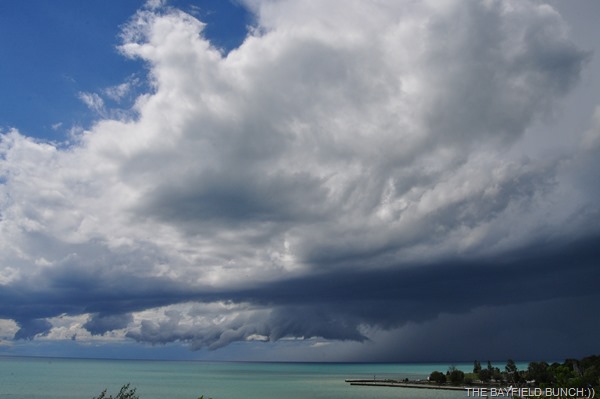 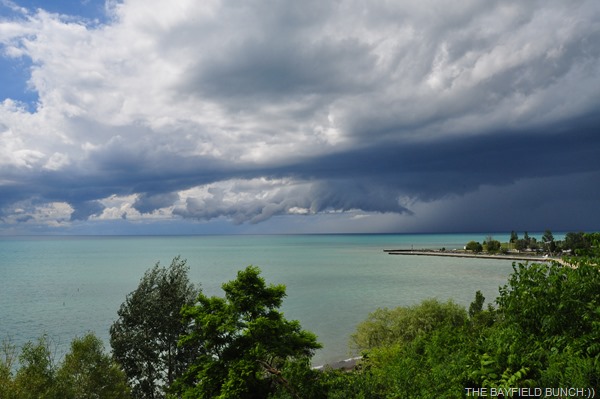 Skies up the lake in the direction of Goderich were looking pretty dark as were skies looking down the lake towards Grand Bend.  Offshore Bayfield seemed to be in a temporary sunny spot.  A few sailboats scurried for the safety of the harbor mouth just in case while I saw a smaller power boat looking like it was overloaded with people heading out into the lake.  Didn’t think that was very wise but lucky for them the storm came ashore & veered inland north of Bayfield.  Skies lightened out over the lake to the north. 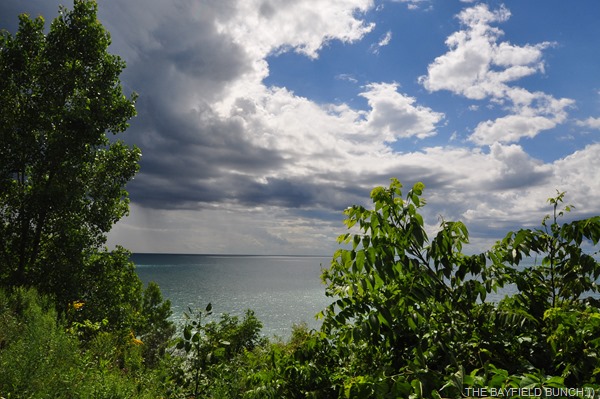 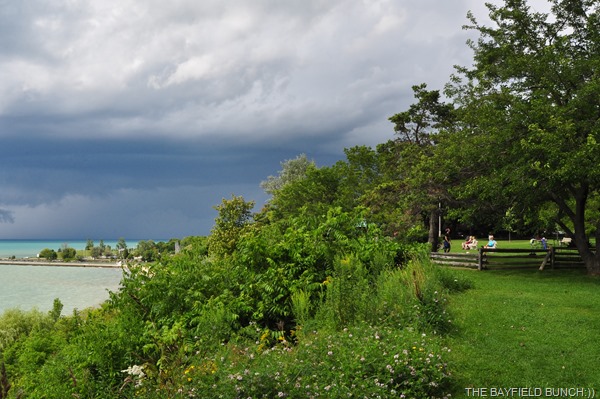 PEOPLE GATHERING AT PIONEER PARK TO WATCH THE STORM COME IN 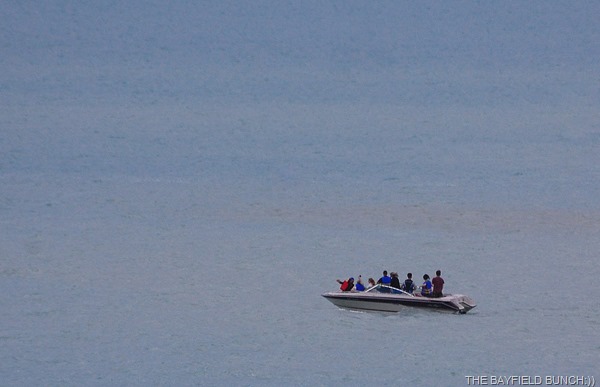 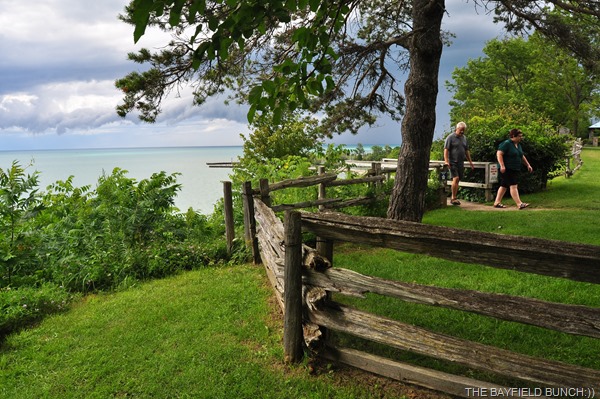 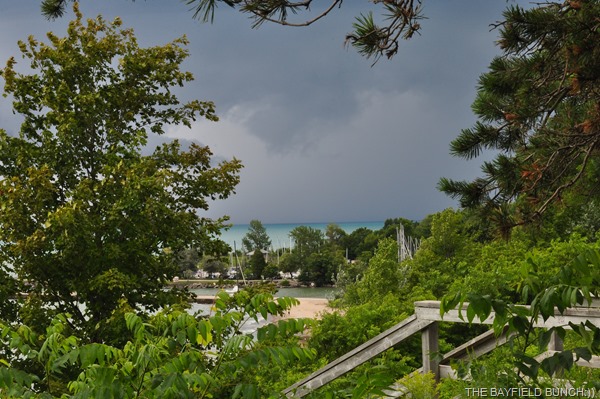 Knowing the storm was now heading cross country Pheebs & I  headed back through Bayfield & out past our 5 Seasons Park to the East.  Ominous dark angry clouds to the North-east.  We stopped about a mile & a half East of our Park on a country road.  Huge dark clouds were rolling right over top of us & it felt like if we could jump high enough we could have jumped into the clouds & went for a ride. 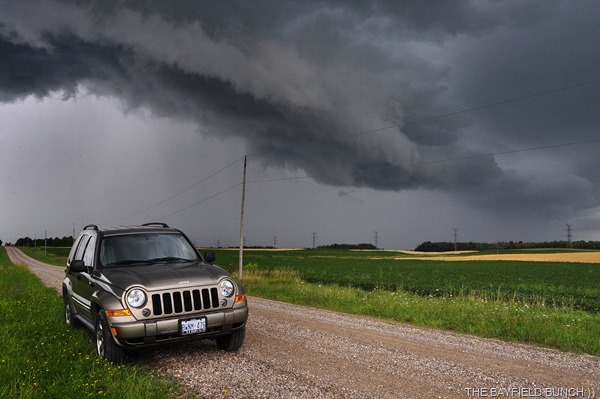 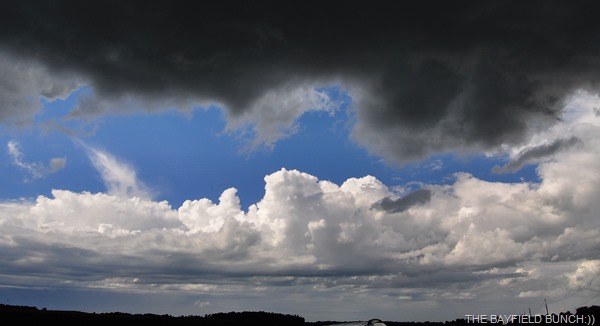 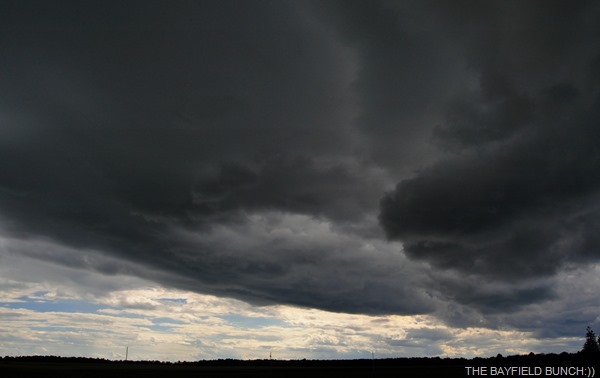 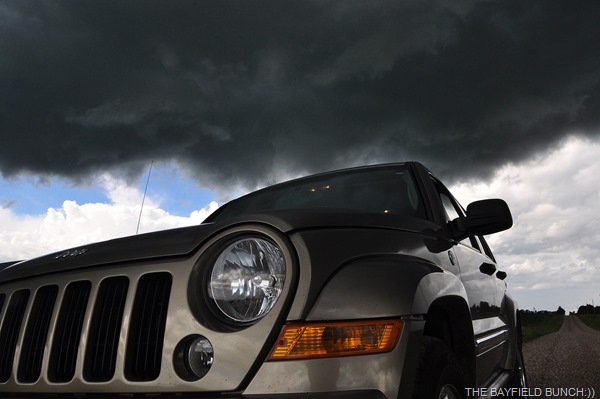 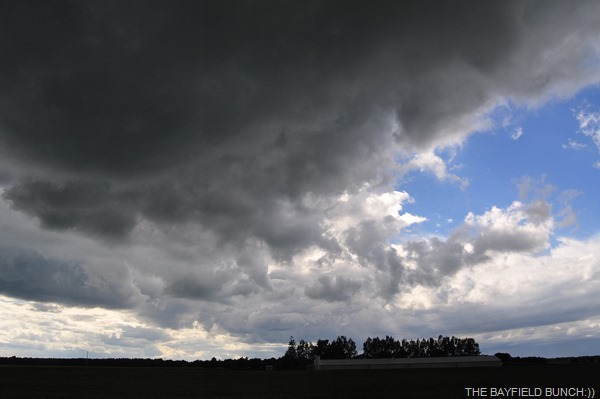 Standing there on the road taking a few photos I was reminded of the years we lived in the country at the old Weenie Roast ranch over near Fullarton Ontario.  We had open skies all around us there & we used to sometimes sit on the porch watching storms roll across the horizon to the South.  It’s been nearly 13 years since we have been living in the Pine forest where we are now & the only glimpses we have of the sky are straight up through a few open patches in the pine trees.  At the Weenie Roast ranch we saw the sunrises & the sunsets & best of all for me was the open night sky with stars from horizon to horizon.  Those were the days when my interest in Astronomy were peaking but now that we are in the forest I have forgotten much of what I learned about the night sky in those days.  We have clear skies, sunrises, sunsets, & stars from horizon to horizon at our digs in Congress Arizona during the winter but not so here during the summer months I’m afraid.  I was so bowled over by today’s usual beautiful skies I said to Kelly when I came home, “let’s dust of the ‘For Sale’ sign & go find us a nice place nearby in the countryside again where we can once more revel in clear open skies, watch the sunrises & sunsets again & sit on a porch watching big thunder storms rolling by.  Ya, let’s do that…………………………. 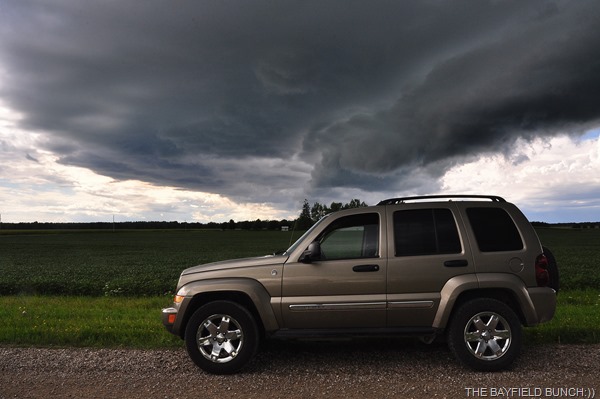 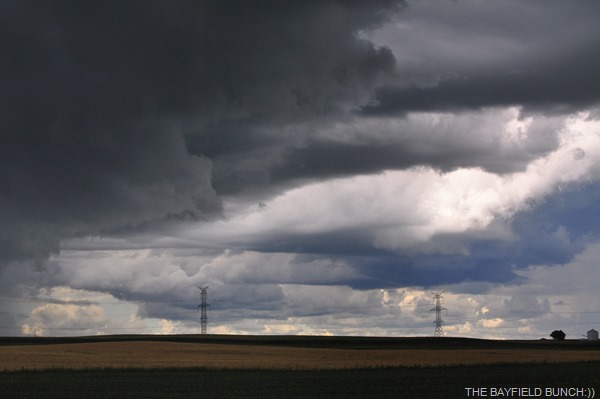 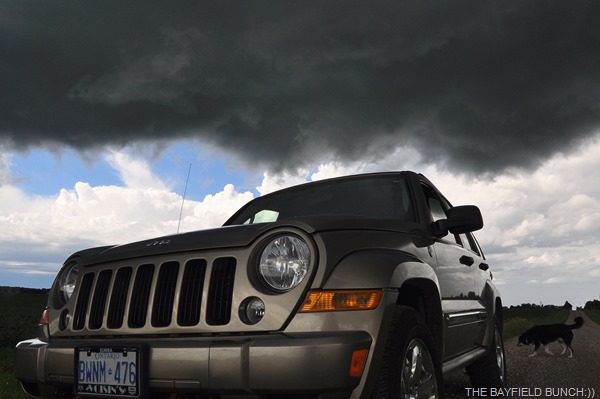 THERE’S A DOGGIE IN THIS PHOTO:)) 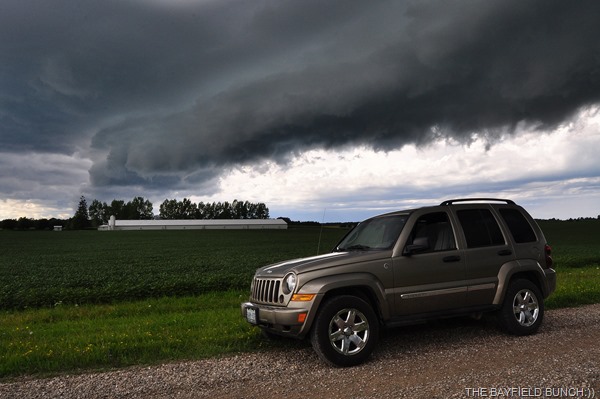 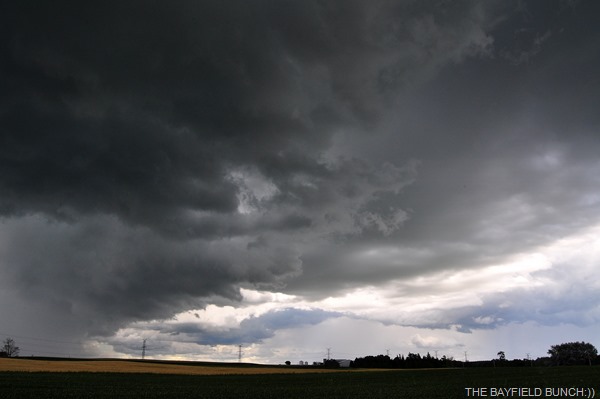 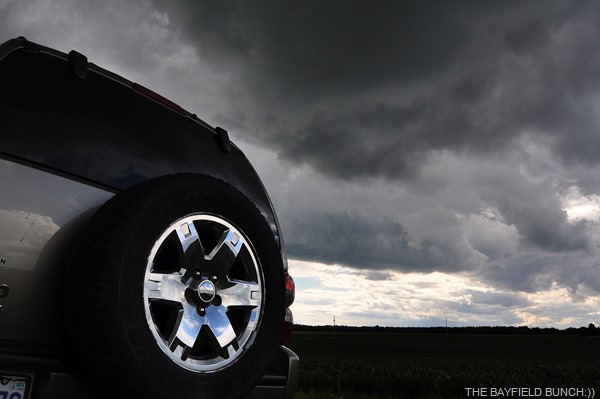 It was still raining around 4 o’clock while I was sitting at my computer editing photos from earlier afternoons stormy skies when all of a sudden a shaft of sunlight pierced our pine tree canopy into our front yard.  Then another & another although it was still raining.  I knew instantly what that meant so grabbed my cameras & headed for the Jeep.  Knew I only had a few minutes to see what I knew would be in the sky east of the Park.   Sure enough as I cleared the forest we live in I saw a beautiful Rainbow arcing low over farmer’s fields just right where I had expected it to be.  Still raining a bit but I was in sunlight as I quickly pulled over & grabbed a few rainbow photos.  Also caught part of a second fainter rainbow above the main one.  Oh yes I thought to myself, we have got to get ourselves out of the confining forest & live once again surrounded by all of Mother Nature’s wondrous panoramic country views.………………………….. 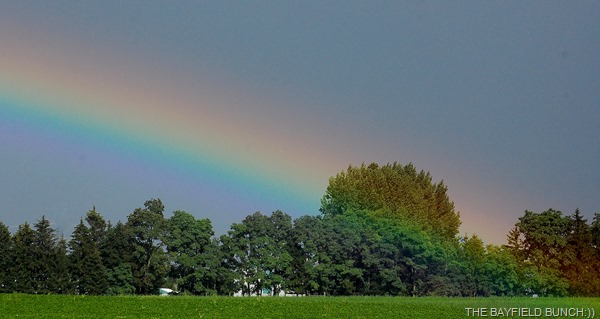 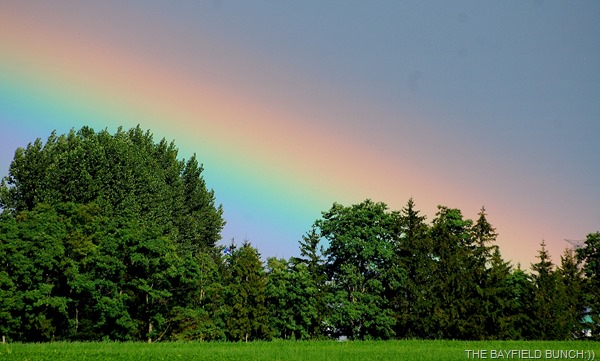 Uploaded about 50 additional barn photos plus an old outhouse to my ‘OLD BARNS, SOME NEW ONES, AND A FEW SHEDS ALONG THE WAY album today.  Latest barn photos are at the beginning.  And a big thanks to our good friend & neighbor Catherine Horton for giving me this great book about the history of early barns.  Excellent drawings & paintings of old barns along with detailed descriptions & sketches of tools used to construct barns many years ago.  Some sketches depict how the walls & beams were raised.  Thank you Catherine:)) 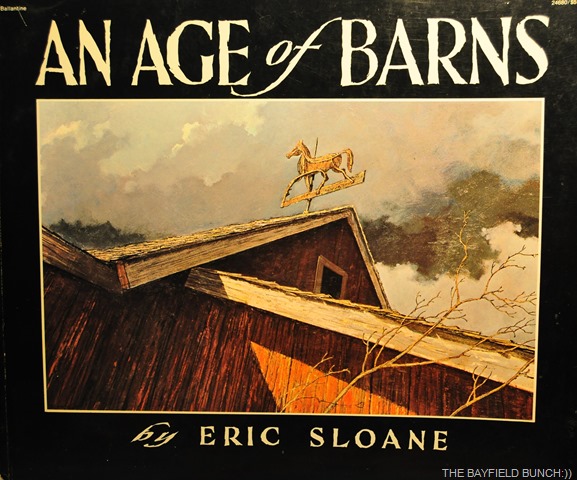 GROANER'S CORNER:((  Tech support people like me spend our days on the phone with customers. Many like to chat while waiting for their computers to reboot. One man told me he'd been a long-haul truck driver.  I'd love to drive a big rig," I said, "but I'd worry about falling asleep at the wheel."  "Here's a tip to stay awake," he offered. "Put a $100 bill in your left hand and hold it out the window."