I RANG THE OLD CHURCH BELL BUT I RANG IT SOFTLY 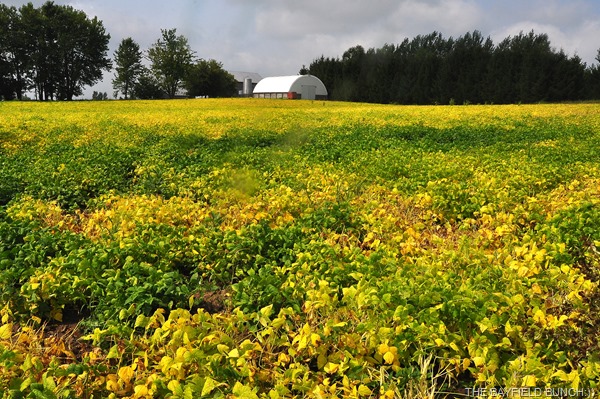 Needing some new blog photos & with a few tickles of sunlight trickling their way through the Pines little Boogzy & I were out the door & on our way.  Destination was the Hullett Marsh where I had hoped we could so us some walking but squadrons of Kamikaze Mosquitos immediately swarmed us driving us back into the safety of the Jeep.  There would be no walking in the Marsh this morning. 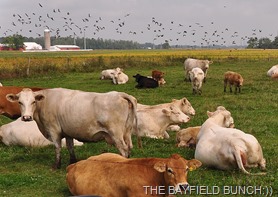 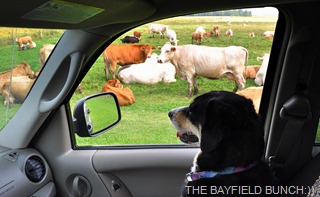 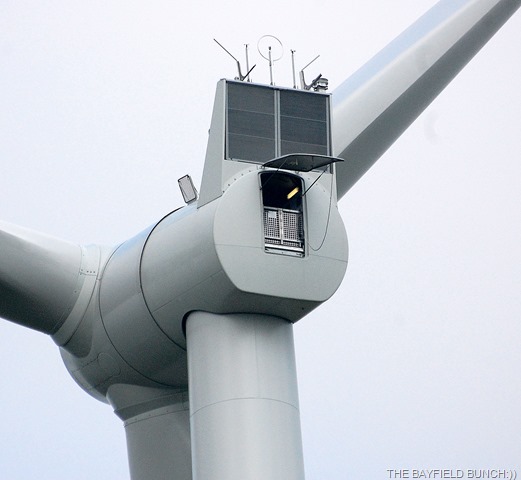 NOTICED THIS WIND TURBINES REAR FLAP OPEN & SUSPECT A WORKER WAS UP IN THERE DOING SOME MAINTENANCE…..BLADES WERE STOPPED & I COULD SEE WHAT APPEARED TO BE A NEON  LIGHT INSIDE

With all windows down & some good old yesteryear Crooners on Sirius Satellite radio we slowly gravel roaded our way along heading east for awhile then turning south.  Another couple dozen barn photos along the way as well as a Mosquito-less walk in a nice open air & well maintained countryside cemetery just a mile South-west of St. Columban near Dublin Ontario.  With late morning temperatures rising & humidity building we headed for & arrived home shortly after noon.   Rest of my day was spent in the comfortable coolness of our house. 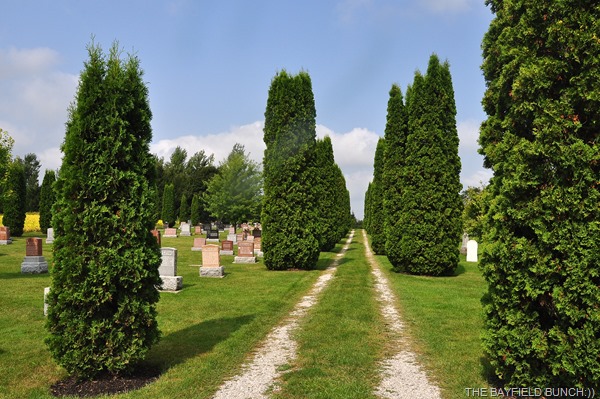 NICE WALK IN THE ST. COLUMBAN CEMETERY THIS MORNING 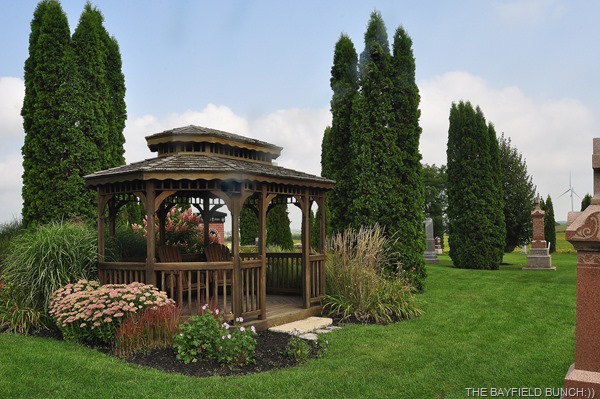 THIS CEMETERY IS VERY WELL MAINTAINED 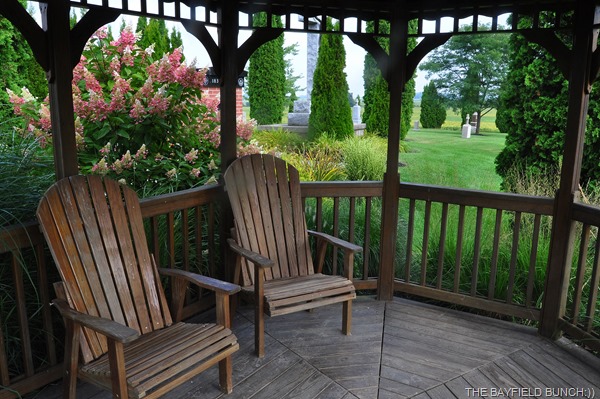 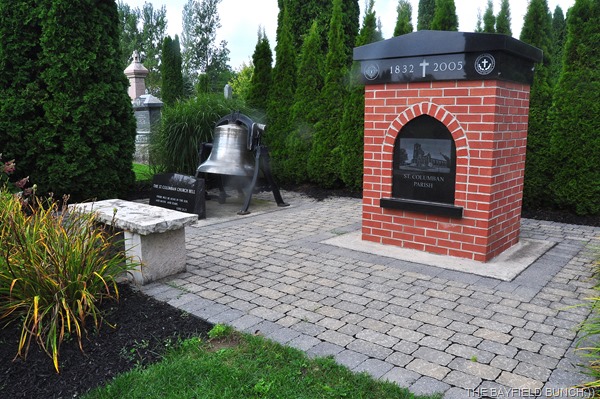 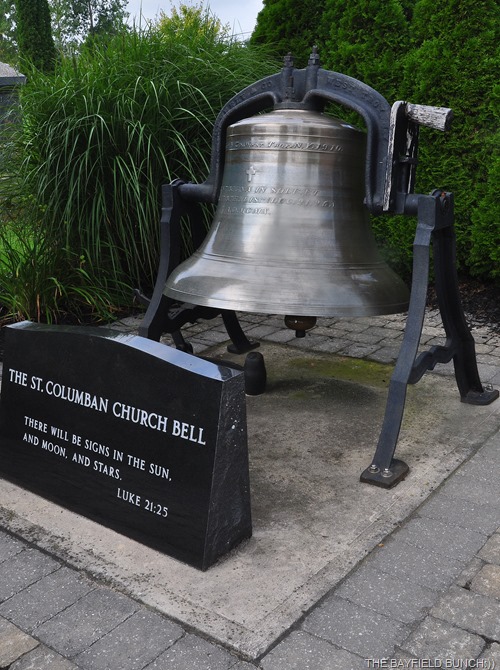 THE CHURCH IN ST. COLUMBAN THIS BELL ONCE HUNG IN WAS TORN DOWN ABOUT 5 YEARS AGO 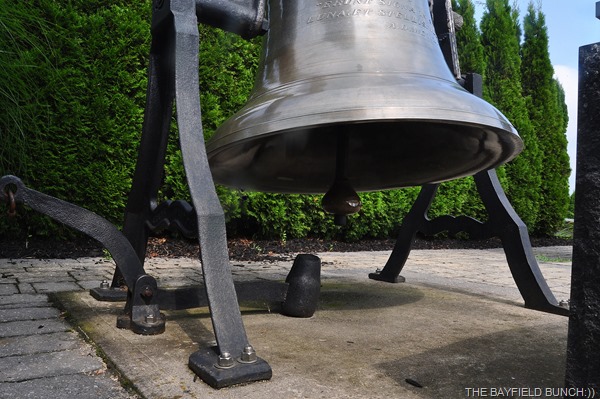 THIS CHURCH BELL CAN BE WRUNG BY PULLING DOWN ON THAT IRON LEVER AT THE LEFT BRINGING UP THE OTHER END TO STRIKE THE BELL…..DID I RING THE BELL??  YES I DID, SEVERAL TIMES BUT I RANG IT SOFTLY 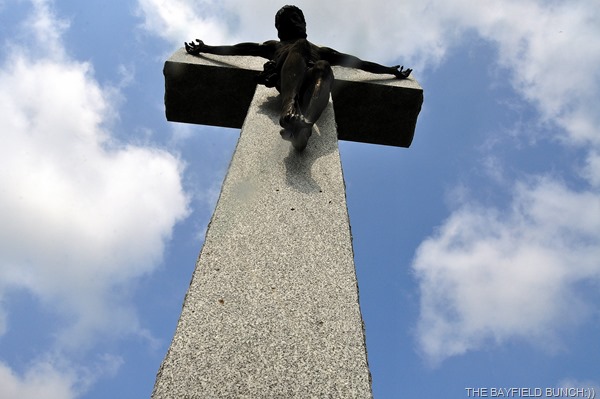 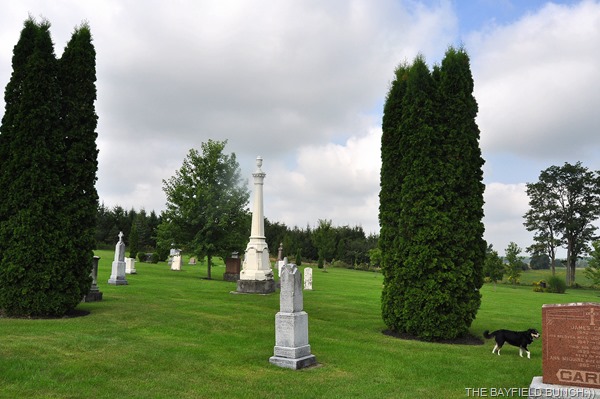 THERE’S A DOGGIE IN THIS PHOTO 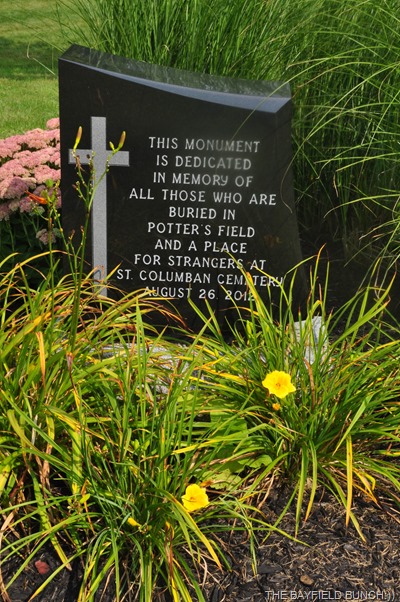 Back in the mid 80's I went through a period of working several jobs at a time & for a short while had 4 part time jobs on the go.  This series of part time jobs came after I managed a 'one hour photo store' for about 2 years in Stratford Ontario.  When I burnt out & quit that stressful position all I wanted to do was to go back to what I enjoyed doing best.  Driving.  Just give me a little truck & let me go deliver parcels, maybe a driving job just transporting folks from Point A to Point B, how about a fast paced newspaper route delivering newspapers to several hundred rural subscribers 5 days a week.  How about working for a mobile sign company in a totally different city delivering & setting up mobile signs.  Well, I did all of those things plus ran a small photo business on the side re-doing old black & white photos in my own darkroom.  But I see I am off track already here........What I wanted to say was how nice it was Sunday evening when one of my old Boss's with his daughter dropped around our house to say Hello.  Mel Leasa & his late wife Phyllis (she was just one happy bubble of personality plus) were owners & operators of a transportation company called, 'Airports Anywhere in Stratford.'  They hired me in that period of time I was talking about (think it was the summer of 86) as a part time driver transporting people to & from Pearson International Airport in Toronto.  I later drove full time for Mel & Phyl right up until the time they sold the company at which time I continued driving for the new owners up until August of 2000.  Mel & Phyllis, part time RV'ers at the time themselves were great people to work for & it was nice to see & reminisce with Mel Sunday night.  Last time I saw him was 3 years ago when he & his Brother dropped around.  And Sunday night was the first time I met Mel & Phyl’s daughter Sherry.  When Mel & Phyllis would head off on their winter boondocking breaks in the South-west I would occasionally email them with humorus takes on what all was happening around Stratford & area at the time.  This was the early beginnings of my interest in travelling & boondocking around the South-western United States & it was Mel & Phyllis who first put the bug in my ear:)) 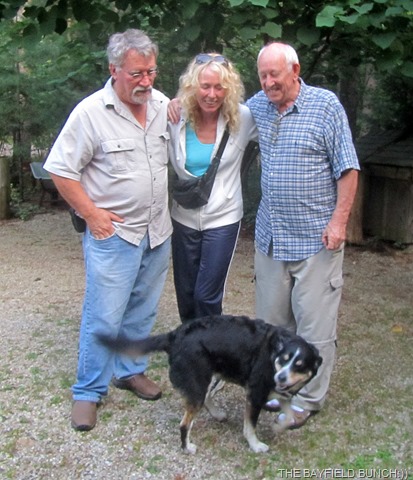 MEL ON THE RIGHT, SHERRY IN THE CENTER & ME & MY EVER PRESENT GRUMPY OLD FACE ON THE LEFT 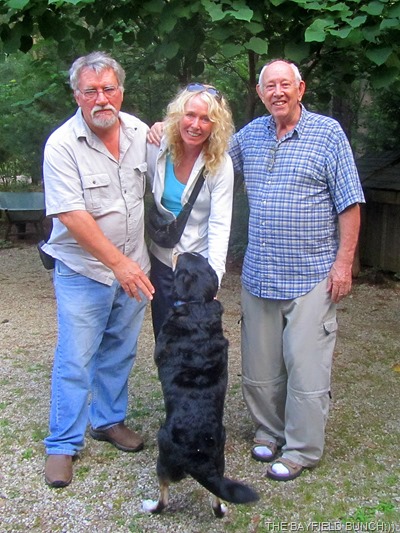 A Guest in our Shout Box inquired about my use of Google Earth to check out planned roads & routes.  I think a lot of folks are doing this now & it's a great way to scout out an area just about anywhere one can think of.  To do this one just has to simply download 'GOOGLE EARTH' to their computer, familiarize themselves with how it works & the controls used to fly around the country.  Where 'Street View' is applicable they can even come right down to the ground & land on roads & streets.  And from there they can again use Google Earth’s ‘Street View’ controls & drive along those very streets even casting glances left or right to look at buildings or house numbers as they go.  Google Earth is a remarkable piece of free technology available to anyone with a computer & a good internet connection.

At one point today Pheebs & I had just pulled over on a gravel road alongside a cornfield for a leg stretch when I noticed a dark colored pick-up truck emerge from a laneway a couple hundred yards up the road.  Started to turn right but spotted me & wheeled around left & slowly came towards us.  My natural response whenever approached by a strange vehicle or person is ‘OH-OH’.  I called Pheebs up out of the grassy ditch to hold her collar while the vehicle hopefully went on by.  It didn’t.  Driver’s window was down as it pulled up alongside us & stopped.  Could see right away it was an elderly farm fellow……& he had a big smile on his face.  Well we  had ourselves quite a chat.  His Son’s run the farms now & he was just out checking the fields.  Married for 65 years his wife had just passed away a few months ago.  Been a farmer all his life & grew up on the very land we were chatting on.  Said he liked my Mojave hat & wondered where I got it.  Told him California & he said it wasn’t too likely he’d get himself down there to get one.  Thought later if I knew which farm he lived at I’d pick him up a hat this winter & drop it off in his mailbox next Spring.  I like it when conversations go well…………………. 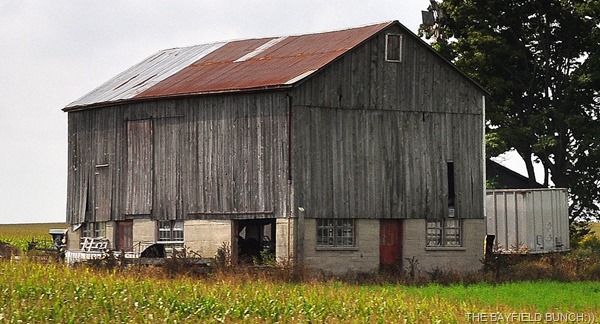 A SAMPLING OF TODAY’S BARNS 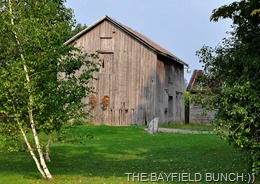 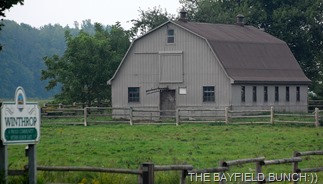 COULD THIS BE A BIG LAKE FREIGHTER LEAVING THE GODERICH HARBOR IN AN EARLY MORNING MIST??  NOPE, IT’S A BIG GRAIN ELEVATOR IN CLINTON ONTARIO THIS MORNING

After posting Sunday night’s post Pheebs & I headed on over to the lake to check out the sunset.  I was hoping to then slip out into the countryside & watch the Moon come up but with humidity in the air things looked a little hazy & I was feeling a bit tired anyway so we just ambled on home. 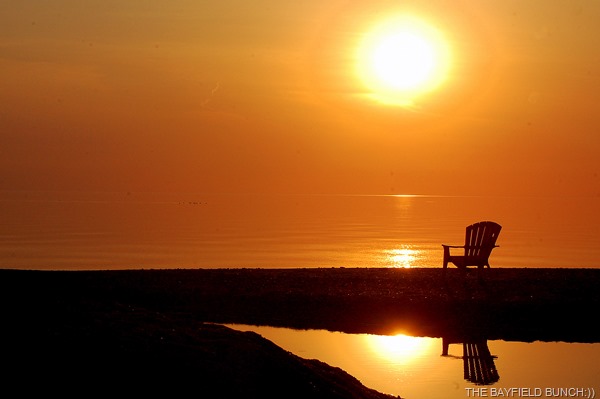 GROANER’S CORNER:)) As a new Ensign, I was assigned duty at the Naval Observatory in Washington, DC, and carpooled to work with a veteran Marine sergeant. One afternoon, I showed him a pair of brown shoes I had purchased to go with my khaki uniform. He examined the leather carefully. "Let me take these home," he said, "and I'll show you a real Marine Corps shine."  The next day I wore my old shoes, expecting to switch them with the ones the sergeant was polishing. From a grocery bag, Sarge pulled out the right shoe, shining like glass. "This is the way a Marine shines a shoe," he said. "Now all you have to do is polish the left one to look like it."

The shipwrecked mariner had spent a number of years on a deserted island. Then one morning he was thrilled to see a ship offshore and a smaller vessel pulling out toward him. When the boat grounded on the beach, the officer in charge handed the marooned sailor a bundle of newspapers and told him, "With the captain's compliments. He said to read through these and let us know if you still want to be rescued."  (rather timely I’d say)