I AM ONE HAPPY GUY TONIGHT:)) 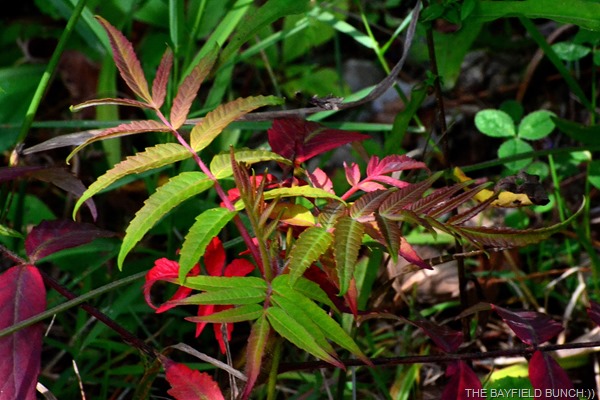 Had I taken a minute to look up before Pheebs & I left the house Wednesday night around 10.30  I could have saved myself a round 8 mile drive.  Upon reaching our 'night sky' spot I was disappointed to find a patchy cloud cover over head.  Knew seeing any Perseid meteors was unlikely & no point in hauling my camera & tripod out of the Jeep for any star photos.  Stood on the country road for a short while enjoying the freedom of the night then loaded up the Pheebs & we drove the short 4 miles back home again. 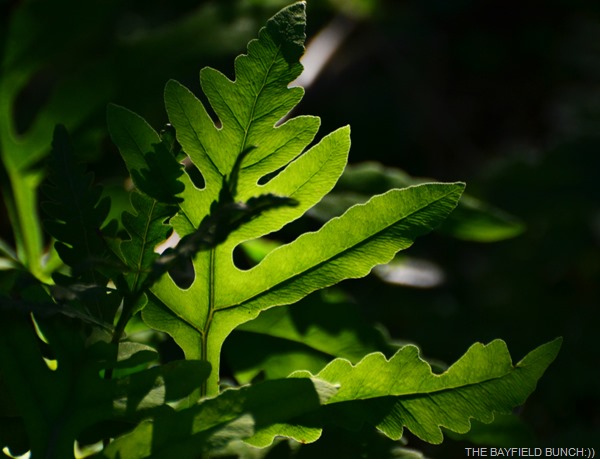 Kelly, up early at 5 a.m. loaded up Pheebs & the two of them headed out of the Park about a mile to the East in hopes of seeing some meteors.  And sure enough she saw half a dozen right off the bat.  Doesn’t seem fair somehow!!  I wasn't feeling up to snuff at 5 so didn't go with them.  Well I guess there is always next year. 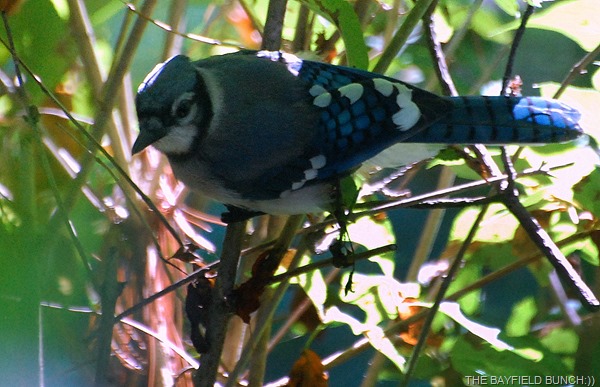 It was a traveling coffee morning for my good friend Richard & I.  My turn to drive so we grabbed a Horton's coffee to go in Clinton & headed south of Bayfield.  Wanted to show Richard that broken wind turbine blade I took photos of last week.  Blade had not been replaced & was still hanging  down.  As we approached we could make out a couple figures standing high atop the turbines nacelle.  Probably part of a crew assessing how to remove the blade & affix a new one in it's place. 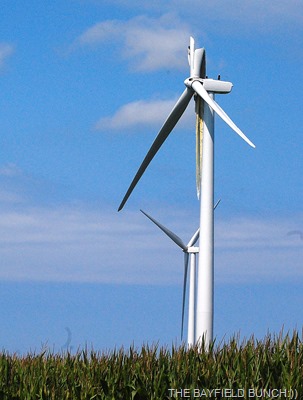 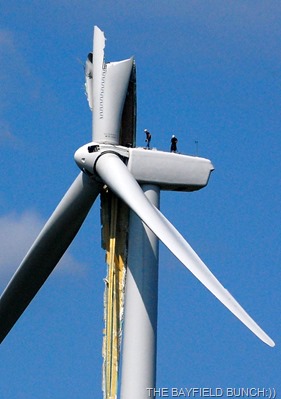 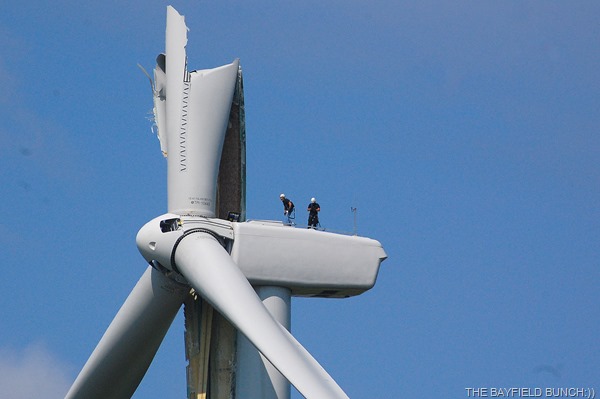 Another nice couple hours spent with a good friend as we covered all the usual topics plus a whole host of new ones.  Always something to talk about interspersed with bouts of laughter.  I do look forward to our semi-monthly 2 hour drives & non stop conversations.  And an age correction.  Several weeks ago I had mentioned while I was 70 Richard was 80.  That was incorrect.  Richard is still a young pup at 78. 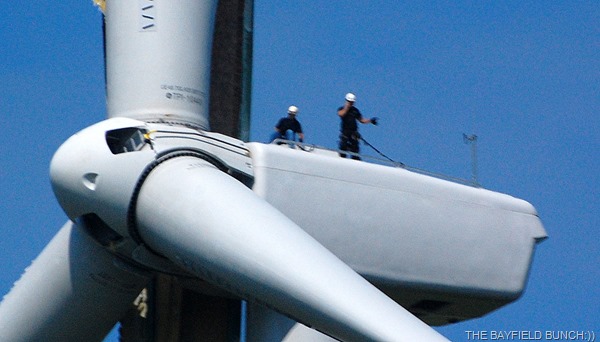 I was early for my afternoon medical appointment at the Maitland Valley Medical Center in Goderich.  Only had to wait a few minutes before getting in to see Sue my Nurse Practitioner.  Blood pressure was a bit high but nothing to be concerned about.  She determined my problem was indeed BPPV (Benign Postural Paroxysmal Vertigo) & had me lie down on the examining table while she performed the EPLEY maneuver on my head.  Luckily when I laid my head way back the room remained stable.  Head turned to the right was Okay but had some dizziness to the left.  When finished with the head moves I sat back up with no dizziness.  With a diagram she explained what Vertigo was & how it is caused.  She also went on to explain why I have numbness & pain in whatever arm I am sleeping on at night.  It is this problem which causes me to roll back & forth from one side to the other about half a dozen times a night.  I had assumed it was the blood flow to my arms that was being restricted but she said no it was arthritis in my necks spinal cord affecting the nerves running into my arms.  Made a lot of sense to me.  All this rolling back & forth every night probably set up the Vertigo attack.  She recommended a cervical neck pillow.  Until I try one of these I plan to spend my nights in a semi-reclined position in my recliner.  So am I able to bend over now without becoming dizzy??  Well let me put it this way, although still feeling kind of pooky coming home I was later able to bend over & down to give Pheebs a big much anticipated tummy rub.  And the dizziness was totally gone.  The EPLEY manuever was successful:))))))))))  Now I’m not naive enough to think this can’t happen again but at least next time I will know how to do that EPLEY manuever on my own.  At the time of posting this tonight I am still feeling great with no dizziness or feelings of nausea.  If I wake up in the morning still feeling the same way I am going to be one very happy camper:)) 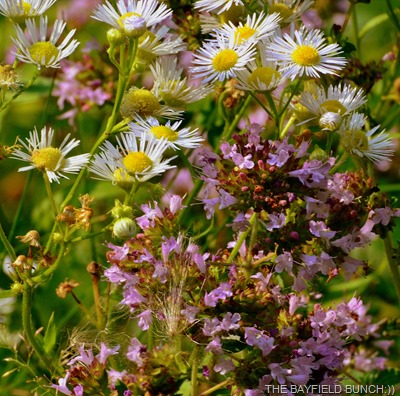 Looking for a couple file photos for tonight’s post I came across some fellow RV’er photos. I think it was a year ago today George & Suzie from OUR AWESOME TRAVELS dropped in to see us here in Bayfield.  I had been thinking about putting a map on our blog but of course couldn’t figure it out.  George & Suzie happened to be in a campground not too far from Bayfield & offered to drive over & show us how it’s done.  Well, turned out a little more complicated than we figured so I just decided to scrap the map idea.  We were happy George & Suzie stayed for supper though.  Probably see you guys at Quartzsite’s 2016 Blogfest eh:)) 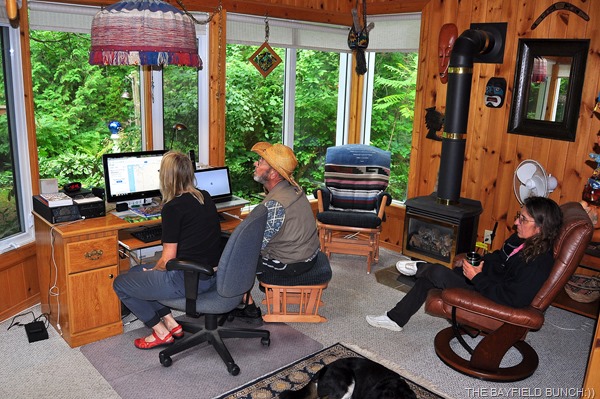 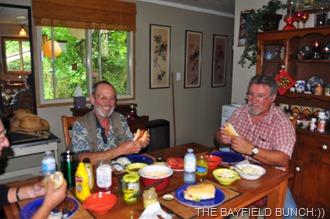 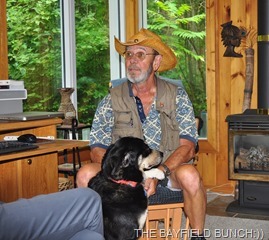 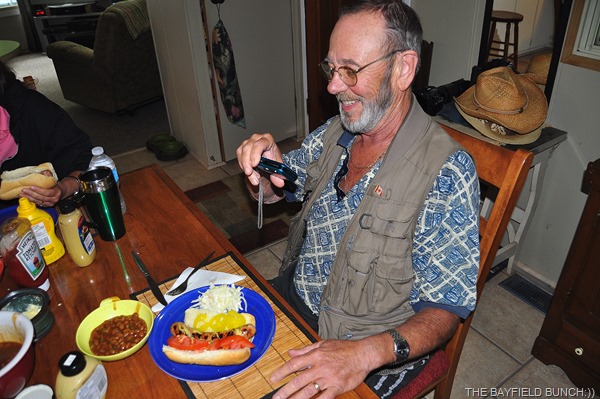 AND THIS IS HOW GEORGE TAKES ALL THOSE YUMMY FOOD PHOTOS 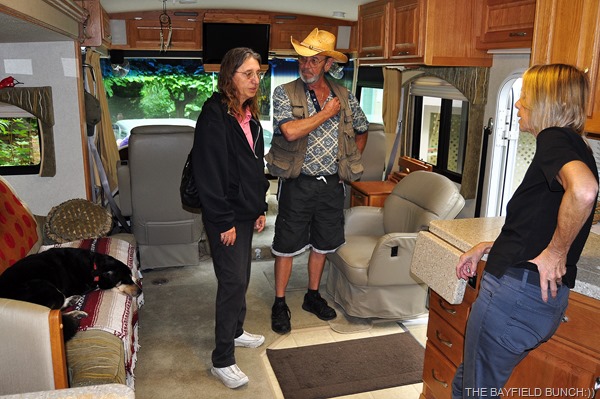 A TOUR OF THE BIG EEE 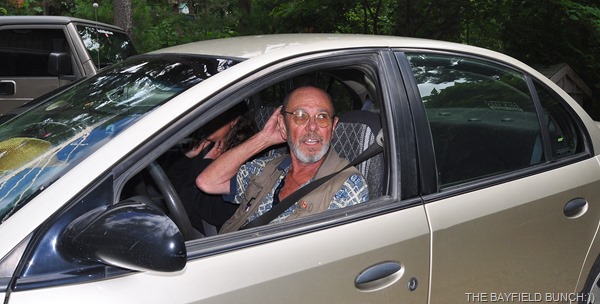 Spoke a little too soon about our cooler early August weather I guess.  Humidity back in the air today so all the biting bugs are in the air again.  Had to crack on the Jeep's A/C going to Goderich & coming home again.  Anytime I have to turn on any kind of A/C unit.....it is too hot out!!  Oh well we are coming down the home stretch to sustained cooler temps:)) 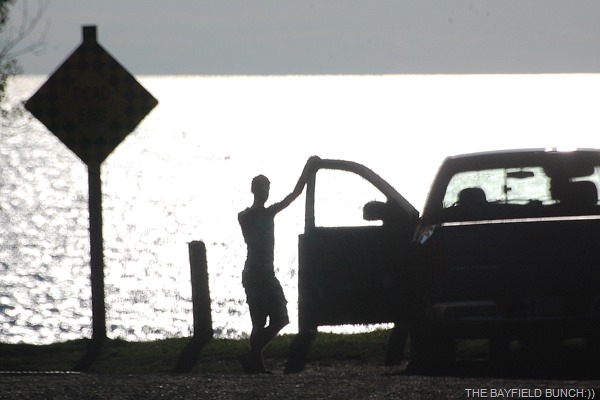 A HASTILY TAKEN SILHOUETTE IN BAYFIELD WEDNESDAY NIGHT WHEN PHEEBS & I HAD TO GO INTO TOWN FOR A QUART OF MILK…..REMINDED ME OF MYSELF BACK IN THE EARLY 60’S

GROANER’S CORNER:(( Last Sunday, the pastor of a local church began his sermon with a supposedly true story... "I was on a plane last week, flying from Chicago to California, when we ran into some very severe turbulence. As it got worse, the passengers became more and more alarmed, and finally even the flight attendants began to look concerned. Finally, one of them noticed that I had "REV." in front of my name on the passenger list came over to me and said, "Sir, this is really frightening. Do you suppose you could ... I don't know ... do something religious?"

"So I took up a collection."