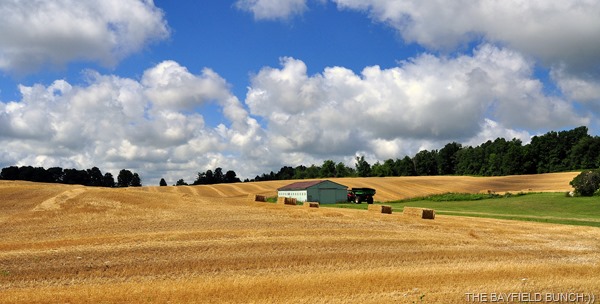 Soon as my blog published Sunday night Pheebs & I were out the door into the Jeep & headed for Bayfield's Pioneer Park in hopes of getting some photos of the approaching storm.  Huge black & gray clouds were moving fast & I managed a few shots through the windshield.  Heading for the cliffs overlooking Lake Huron there was a steady stream of cars going the other way.  Rains began & by the time I reached Pioneer Park the skies opened up dumping barrels & barrels of water substantially reducing visibility.  I was about 5 minutes too late for photos as huge winds sweeping up the hillside from the lake appeared to be trying their best to rip every living plant right out of the ground.  Sitting in the Jeep with wipers on high speed I still couldn't keep the windshield clear.  Out my passenger window I saw people scurrying by.  These sunset hopeful folks had walked to Pioneer Park from downtown Bayfield just a few blocks away but the storm came ashore so fast they were caught in the deluge.  Rain eased up a bit so we headed down to the beach & harbor area but there was no getting out of the Jeep despite the rains letting up a bit.  Large waves were pounding & sweeping over Bayfield’s outer piers.  No photo opportunities so might as well head for home.  Found out later there had been waterspouts in the storm out over the lake so was very disappointed I had missed that. 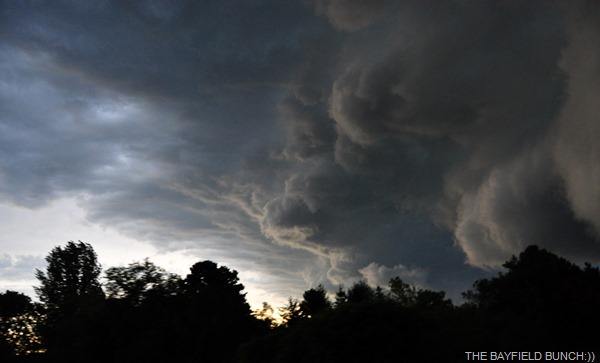 ONLY MANAGED 2 PHOTOS ON MY WAY TO PIONEER PARK 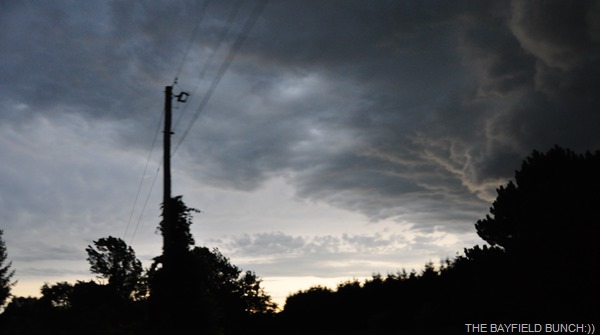 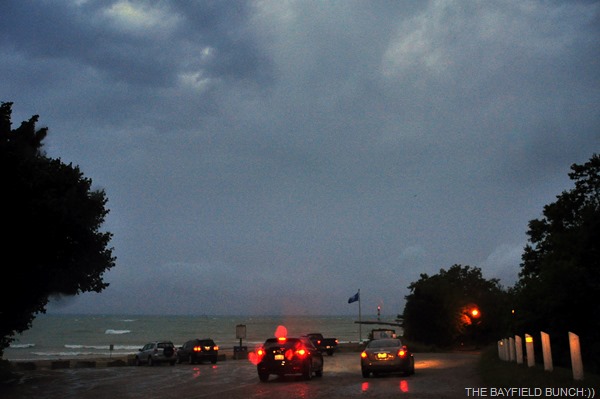 It was dark with no traffic on the roads.  I was slowing down to make a right hand turn into our Park when I saw a small dead tree across the road in front of me.  Not a big tree but enough o do a little front end Jeep damage had I run into it.  Threw my 4-way flashers on & figured I had just better wait there with my lights & flashers on in case someone else came along that section of road.  Half a minute later a van pulled out of our Park on the other side of the tree & threw it's 4-way flashers on as well.  Turns out it was a fellow who lived in our Park.  I stayed put while he slipped back into the Park to notify Ken the Park's owner about the downed tree.  We knew Ken always had his chain saw handy.  About 5 minutes later Ken showed up with his big tractor & using the forks on the front end lifted up the dead tree moving it off to the side of the road.  It was still raining so he & the other fella got pretty wet.  Couple minutes later Pheebs & I were home.  Nice to have a little excitement for a change:))

STANDING BY WITH 4 WAY FLASHERS GOING

OOOPS, BACK WHEEL OFF THE GROUND

Thunder, lightning, & rain continued all night right through till morning's first light before finally backing off leaving us with overcast skies which began clearing about 8 a.m.  Sunday's storm blew away our hot oppressive air & most of our miserable humidity leaving us with a beautiful breezy weather day & blue skies with big white fluffy clouds slowly floating overhead.   Morning news talked of storm damage around the area & a suspected tornado touching down about 65 miles north-east of Bayfield.  Fellow photogs from the 'GODERICH SUNSET’ & ‘LAKE HURON SKIES’ Facebook groups have some amazing storm photos well worth stopping by for a look see. 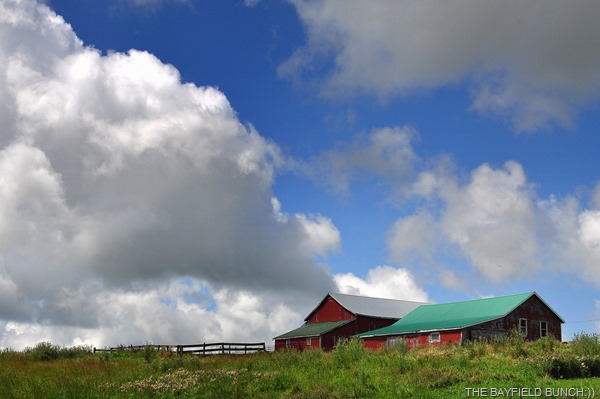 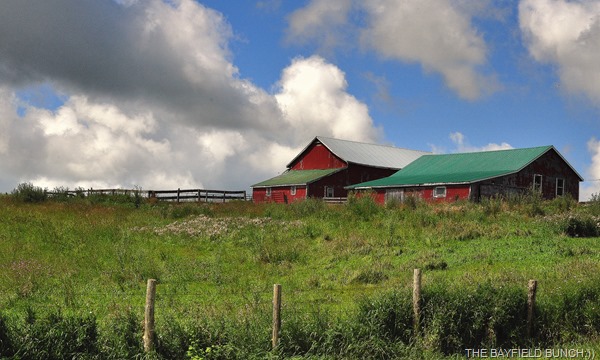 I've been having a few tussles with Windows 10.  Nothing majorly serious but just little buggy things that are enough to drive impatient people like me right round the bend.  Trying to re-arrange my photo files the way I had them in Win 7 tested my tolerance to the point where I had to just shove myself away from the computer this morning.  I was just simply way to frustrated.   Loaded up the little Pheeber Buns & we headed off for a wee summer morn's drive.  When confronted with stressful frustration it is always best to remove myself from the situation for awhile & go do something else.  I look at these Win 10 bugs as 20% Win 10's problem & 80% my fault for my impatience at learning new ways of doing new things differently.  Later this afternoon I was able to get a few more cobwebs swept out of my head & finally make a bit of progress. 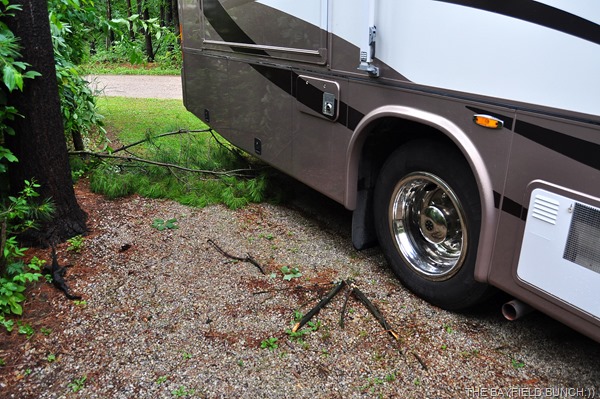 THESE FEW PINE BRANCHES WERE ABOUT ALL THAT CAME DOWN ON OUR PROPERTY DURING SUNDAY NIGHT’S STORM…..CLIMBED UP ON THE RIG’S ROOF TO CHECK THE SOLAR PANELS & THEY WERE FINE…..AND  MONICA YOUR PLACE LOOKS JUST FINE OVER THERE AS WELL:))

I see where there seems to be some growing concern over Windows 10 privacy issues & readers have commented & sent emails regarding that concern.  We have read things over & don’t feel it’s a big deal.  Of course I may very well stand corrected on that issue at some point.  Some people are paranoid over their privacy while others couldn’t care less.  We’re probably somewhere between those 2 extremes & anyone reading my posts day after day for the last bunch of years can easily deduce I’m not a big privacy person.  If I was I certainly wouldn’t be writing a daily blog saying a lot of the things I have a habit of saying from time to time.  And we will just leave it at that…………………………

FARMER’S WERE BACK ON THE ROADS & FIELDS TODAY 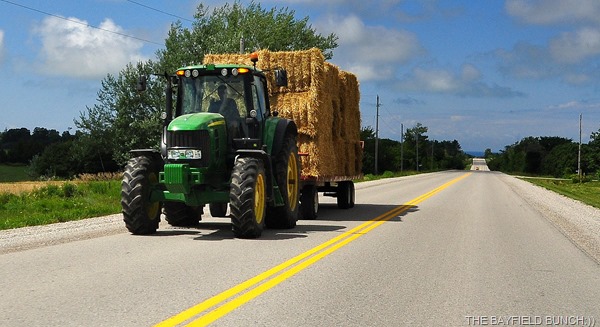 Coffee & a carrot muffin at Clinton's Tim Hortons & we were off for a slow Jeep stroll through the countryside.  More barn photos of course & we did take us for a walk on the Maitland Trail north of Holmesville Ontario.  Mentioning Tim Hortons here's something I have noticed about the Clinton Tim Hortons ever since it was built a number of years ago.  Seems to me like just almost every vehicle leaving Clinton on highway 8 detours through Tim Hortons.  I notice it over & over & over.  If I'm heading east out of Clinton & there are 5 vehicles in front of me it is a pretty safe bet 3 if not all of those vehicles will put on their right hand turn signal & pull into the Tim Hortons coffee shop parking lot.  Not a scientific study of course but I'm betting about 70% of all vehicles leaving Clinton Ontario do so through the Tim Hortons coffee shop drive-thru.  What a Gold Mine that place is...................... 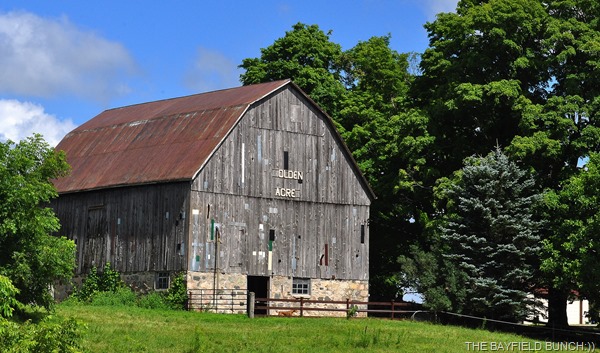 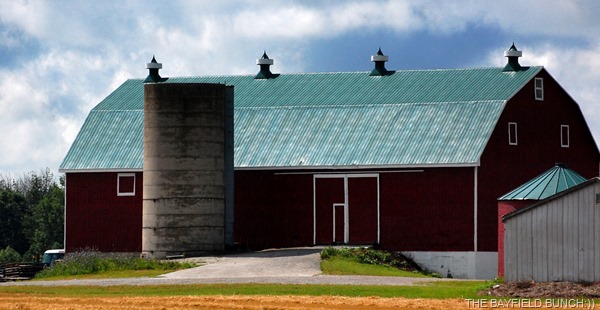 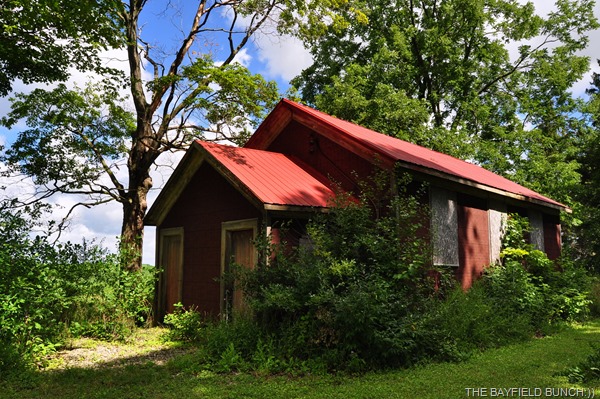 A few more signs of Autumn approaching when we came across some apple trees on the Maitland trail alongside a corn field & how nice to hear those corn stock leaves rustling in this morning's breeze.  Current bushes also bearing fruit & the best sign of an early Autumn occurred when I heard a single Cricket chirping:)) 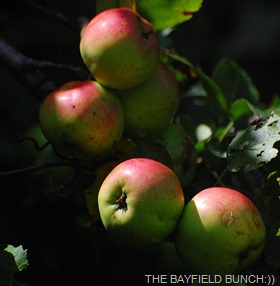 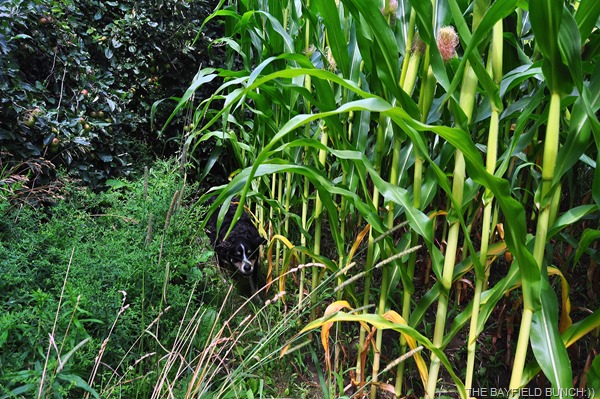 THERE’S A LITTLE PHEEBER FACE IN THIS PHOTO:)) 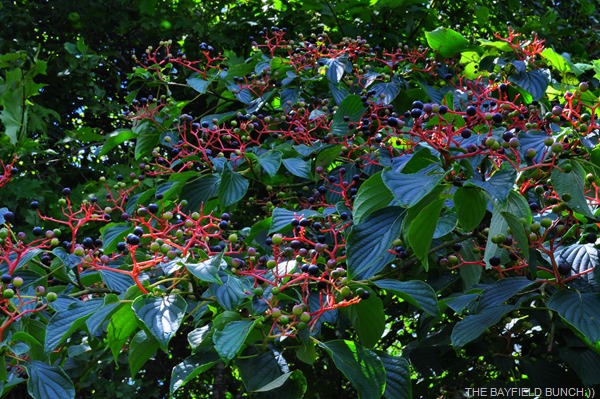 GROANER’S CORNER:(( At his 103rd birthday party, my grandfather was asked if he planned to be around for his 104th.  "I certainly do," he replied. "Statistics show that very few people die between the ages of 103 and 104."

State-of-the-art - Any computer you can't afford.

Obsolete - Any computer you own.

Microsecond - The time it takes for your state-of-the-art computer to become obsolete.