TODAY SOME PEOPLE GOT WET, SOME JUMPED OUT OF AN AIRPLANE & THE WINDMILL DIDN’T GO ROUND & ROUND 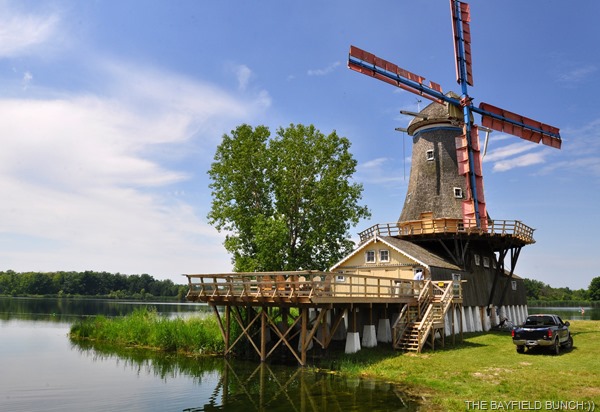 Spent a couple hours standing in the hot sun over at the WINDMILL LAKE WAKE & ECO PARK this afternoon waiting for some people to jump out of a perfectly good aircraft high overhead.  The Wake Board Park is less than a mile from our place & as part of Bayfield's Wind & Water week-end it was the jump zone for few skydivers from the GRAND BEND SPORT PARACHUTING CENTER located just east of Grand Bend.  The exact time of the jump wasn't known except it was to happen sometime between 1 & 3 this afternoon.  I headed on over around 12:30 & walked around the grounds taking a few photos of the large Windmill & a couple water soaked fellows on their Wakeboards. 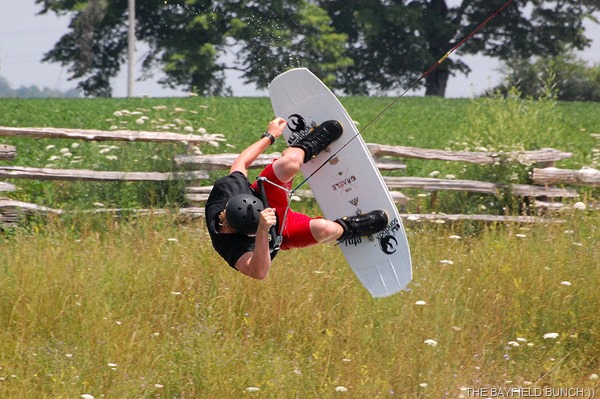 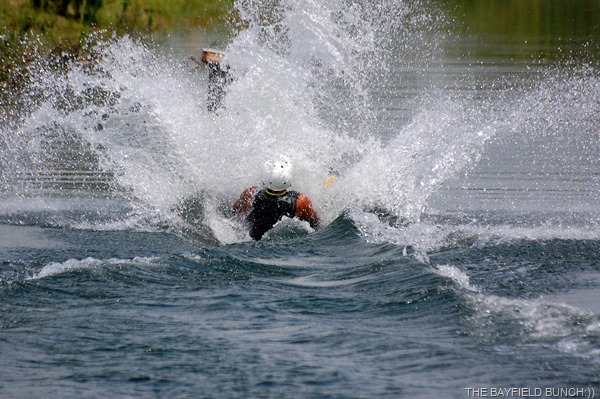 The original attraction on these many acres of scenic property years ago was a large Dutch Windmill.  The windmill is still there but is unfortunately in a sad state of disrepair although I was encouraged to see an older fella working away at something inside the Mill this afternoon.  Once a popular tourist attraction in the area I do seem to recall it once housed a gift shop & tour buses dropped people off for guided tours.  I pulled this off the internet......{Located just outside of Bayfield in Huron County, "This full size windmill is styled after an actual mill in the Netherlands called "The Arend." Folmar Windmill has the capability to be used as a sawmill and a grist mill."  Years ago this windmill was used as a saw mill to cut logs for a heritage boat being rebuilt in nearby Goderich} 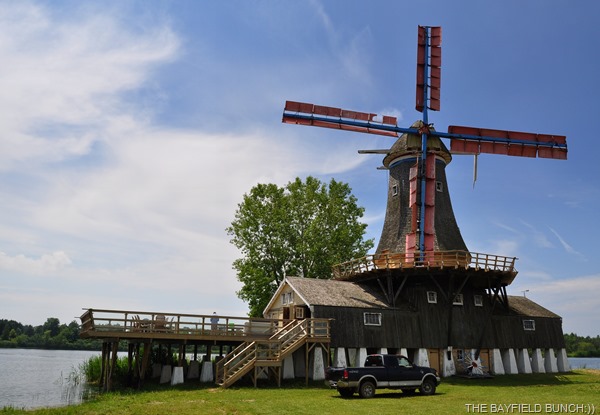 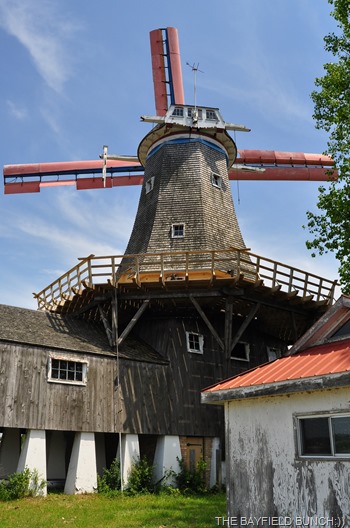 While taking a few photos at the wakeboard pond I saw someone waving at the far end & they had a black dog with them.  Well I'd recognize those two Desperados anywhere & sure enough it was Kelly & Pheebs.  They had driven over in the Sunbird.   It was about 1:30 & we heard the Jumpers would be overhead about 2:15.  Kelly decided to wait in the air conditioned car with Pheebs while I walked back into the Park to await the drone of an airplane & sure enough about 2:10 I heard then saw the jump plane overhead circling to gain altitude.   Four jumpers finally exited the plane at what I think I heard someone say 6,500 feet.  Didn't take the Jumpers long to reach the ground & they soon swooped in overhead one at a time landing in a designated grassy area just a short distance away from where I & others stood.  They all landed on their feet with no stumbles or tumbles.  A few high fives, some hugs, & lots of big smiles wrapped up another successful jump.  After being out in that hot sun for hours I wasn't long in getting myself right back home again.  On with the A/C & into my recliner I went.  And that was about it for another day. 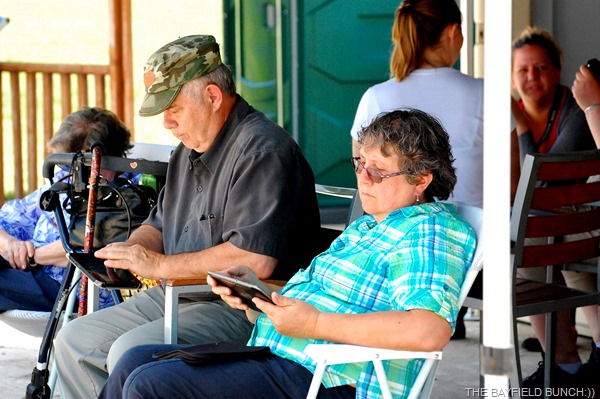 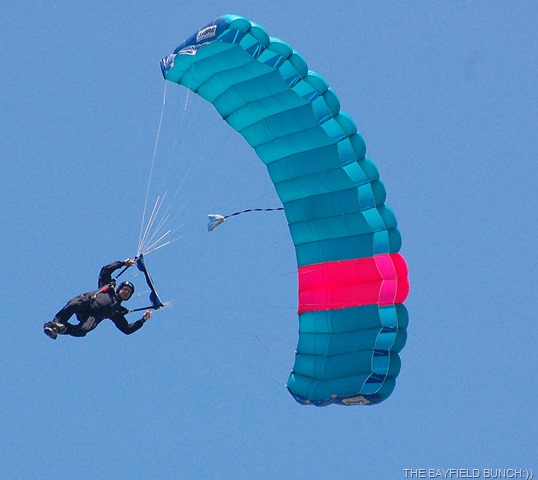 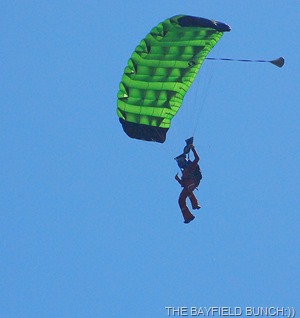 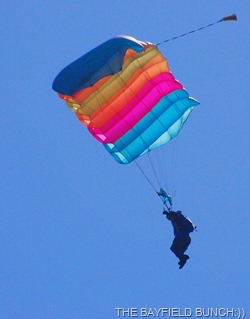 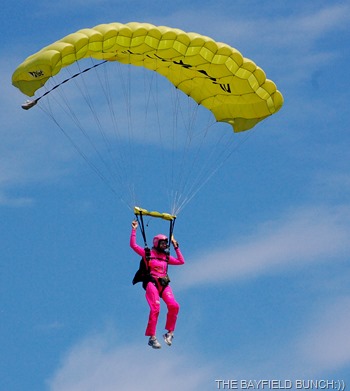 Although I did open a Google+ account years ago I quickly found out it simply was not my cup of tea.  Not being interested in another social media site & also finding it hard to understand I never went any further with it.  My feelings towards Google+ haven't changed but when Google+ plus came on board & basically took over a bunch of stuff it really messed up my whole photo program.  Problem was probably not with Google but with my inability to understand it all.  The word 'Share' always put me off but it was an accidental click on that word in my Picasa photo editing program Saturday that suddenly switched on a light for me regarding photo albums.  Finally a breakthrough.  Much easier to arrange photos in my Picasa program & then go straight to a Google album with them rather than having to upload them to a separate program like Flickr & then have to organize then re-organize the photos & upload them to an album that way.  If I can keep my whole photo process within Google it eliminates a bunch of steps for.  Any way I can make things simper for myself is a good thing.  Well that's the way it seems right now anyway so I'll continue to click my way around the Google album feature & see how I make out with whatever else I can learn. 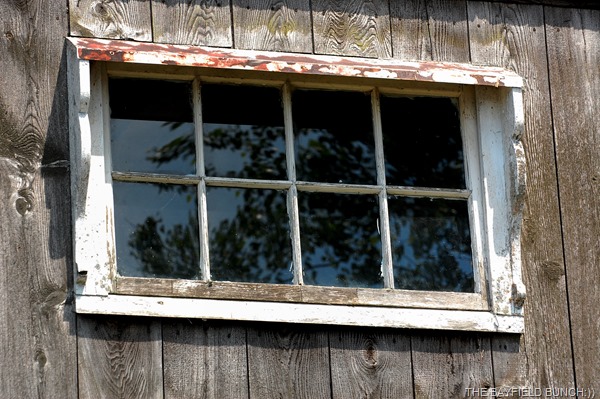 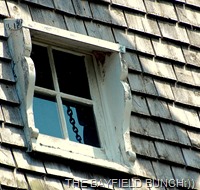 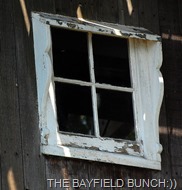 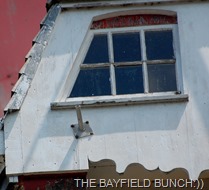 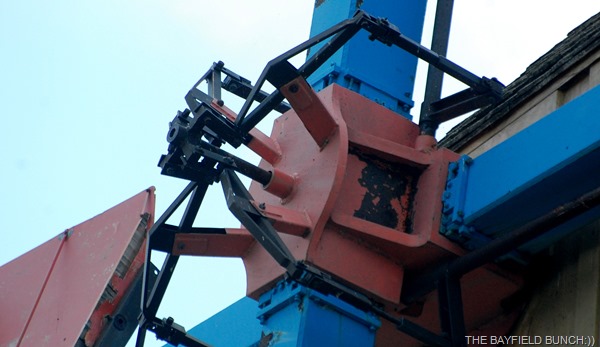 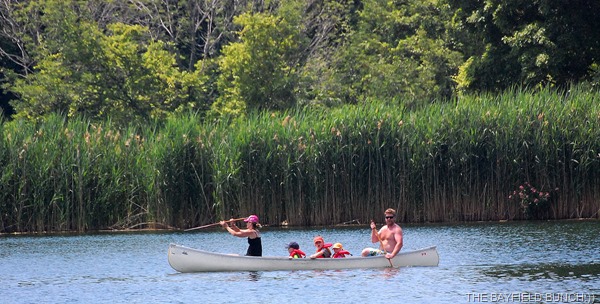 THE WAKEBOARD PARK ALSO HAS CANOE & PADDLE BOARDS TO RENT

I did update my 'Old Barn' photos this morning & have them also now in a Google album which can be found here, OLD BARNS UPDATE.  Newest barn photos are at the beginning.   I plan to also pull all my 'Bayfield Homes' photos into one single album as well.  Also 'Bayfield's Heritage Main Street', 'Van Egmond House', 'Goderich Air Show', etc. etc.  By creating albums I hope to cut down on 'too many' photos in my posts & offer a link to additional album photos as an option. 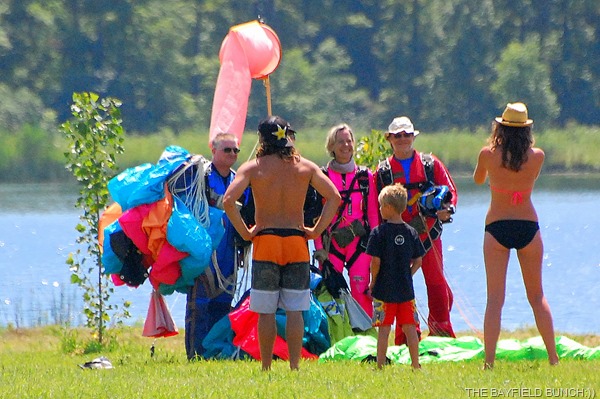 Tonight’s Live Writer album is additional photos I took today of the Wave Boarders, the Windmill, & the Sky Divers.  Be sure to check the album for additional airborne wake boarders:))

Tax his tractor, Tax his mule;
Tell him, Taxing is the rule;
Tax his oil, Tax his gas;
Tax his notes, Tax his cash;
Tax him good and let him know,
That after taxes, he has no dough.

If he hollers, Tax him more;
Tax him till he's good and sore;
Tax his coffin, Tax his grave;
Tax the sod in which he's laid.

Put these words upon his tomb,
"Taxes drove him to his doom."
After he's gone, we won't relax.
We'll still collect inheritance tax.