MORE THAN EVER IN THIS DAY & AGE I AM REMINDED OF MY BOY SCOUT’S MOTTO MANY YEARS AGO…….‘BE PREPARED’!! THURSDAY NIGHT’S HEAVY ATMOSPHERIC MOON JUST UP FROM THE HORIZON

It was cool enough Thursday night for me to wear a jacket over top my flannel shirt which in turn was over top my short sleeve summer shirt.  That cool night air also kept the mosquitoes grounded & made for a much more pleasant experience when Pheebs & I drove out to Tower Road Hill about 9:30 p.m.  Big okra Moon just climbing it's way over the eastern horizon with planets Jupiter & Venus slightly visible in the darkening west.  The road this hill is located on is called Tower Line Road & the spot we go to once housed a collection of old tall radio towers years ago.  I remember seeing them but they are gone now & in their place stands a tall modern communication tower.  A short lane leads into a small building housing what sounds to me like a large electric generator or something.  We park at the head of the laneway & I set up my tripod & camera on the road.  All the times we've been there I only ever remember having one car go by. 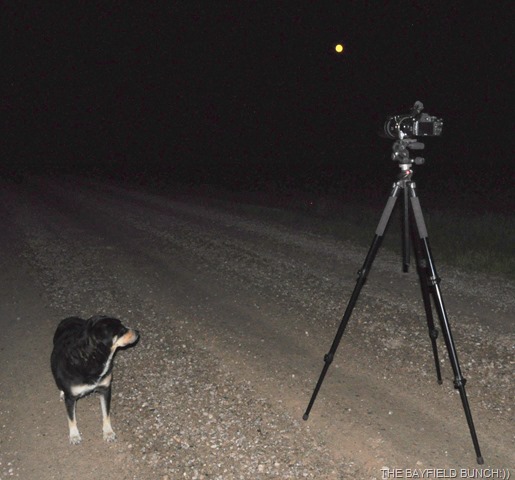 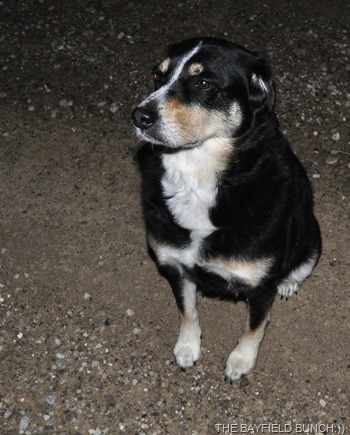 UMMM, ARE WE GOING HOME SOON DAD >>>>>>>>>>>>>>>>>>>>
Hauled out my 80mm Stellarvue Nighthawk telescope, attached an Antares adapter, & snapped on my Nikon D3100 camera.  With my camera set-up mounted on my Manfrotto telescope I first took a few photos of the rising Moon.  With a warmer heavy summer atmosphere I knew my Moon shots would not be crisp like the ones I am able to take in Arizona's cooler clear winter air but I've included one of the shots anyway.  From there I swung my camera/telescope around & pointed it West.  Couple shots of Jupiter & Venus which of course appear as simple white dots in the night sky.  Looking to the south & despite the glow coming from a past waning full Moon I was able to faintly make out the constellation Scorpios with the Planet Saturn above it.  Below along the horizon line were the many red flashing lights atop numerous wind turbines.  Also stationary red lights atop a string of power line towers.  I was able to catch the lights as well as Scorpios & Saturn. 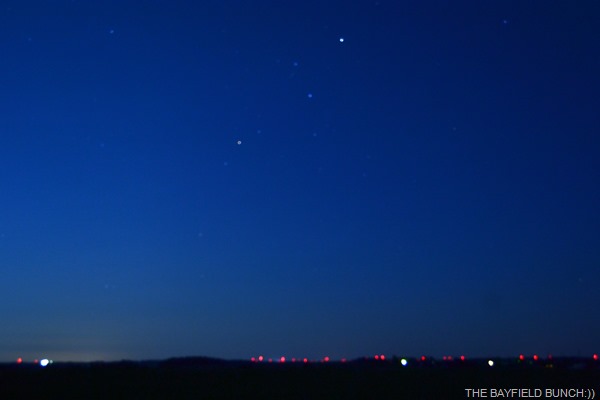 PLANETS VENUS ON THE LEFT & JUPITER ON THE RIGHT…VENUS MAY BE THE BRIGHTEST BUT JUPITER IS BY FAR THE BIGGEST OF THE TWO, IT’S JUST MUCH FARTHER AWAY 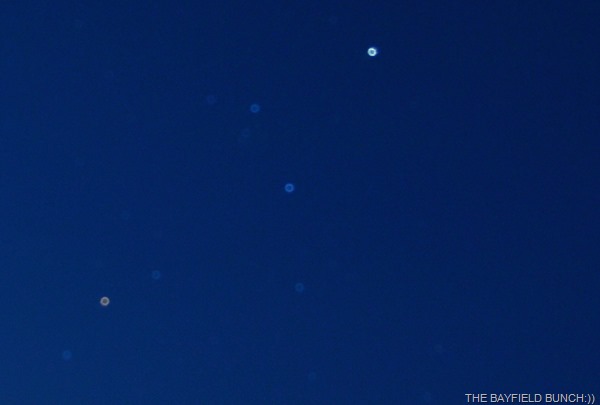 A-HAAAA AT LAST, UFO’S COMING IN FROM THE SOUTH-EAST…AWWWWW NUTS, TURNS OUT THOSE LIGHT APPARITIONS WERE SOMETHING ELSE…DANG IT ANYWAY

While taking these photos I kept hearing a distant sound I thought sounded like single & full automatic gunfire somewhere southeast of my location.  Thought it odd until I noticed a couple flashes in the sky right on the far distant horizon.  Fireworks!!  Judging from the fireworks location well south of Clinton Ontario I figured folks in Vanastra were having themselves a nice night of fireworks.  I estimated Vanastra to maybe be about 5 miles away as the Crow flies.  To my eyes the fireworks were about the size of pin pricks or a marble at the largest.  Swung my camera/telescope around & managed to get a few low shutter speed shaky pictures.   Next week some night when there is no Moon in the sky I would like to try my luck at getting a few photos of the Milky Way.  This night sky photography is all new to me so we'll see how it goes.  Pheebs & I were back home by 11. 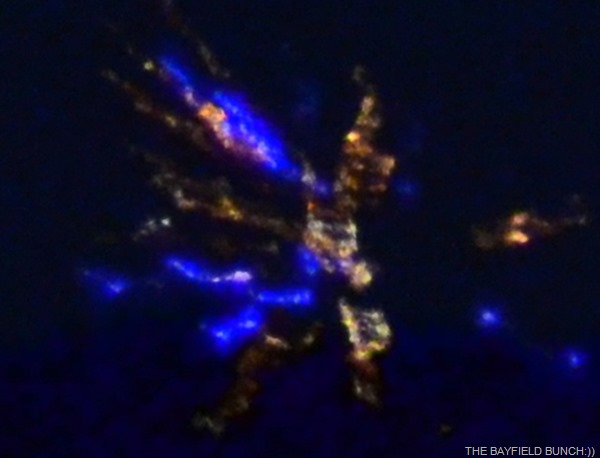 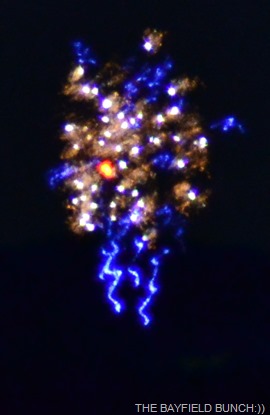 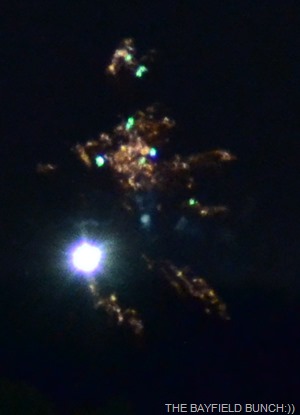 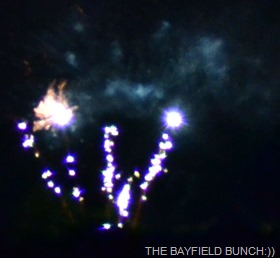 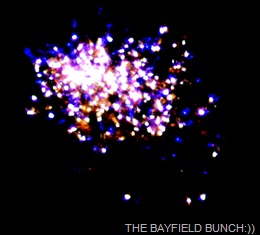 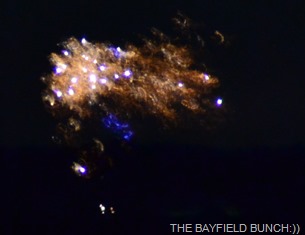 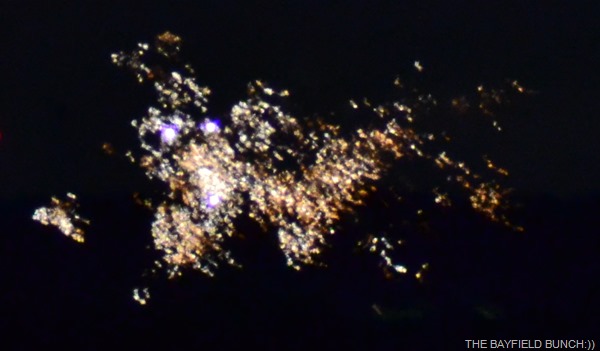 Pheebs & I were again back in the Jeep first thing this morning scouting out some more country barn photos.  Also started another file on old country school houses.   East of Hensall Ontario we stopped at a hilltop cemetery to stretch our legs & give Pheebs a run.  Every summer I like to stop here for a walk around.  Nice view of the surrounding countryside & I always find cemeteries quiet & naturally relaxing peaceful places. 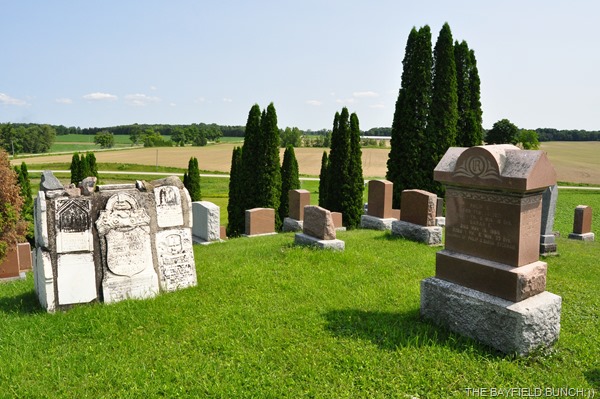 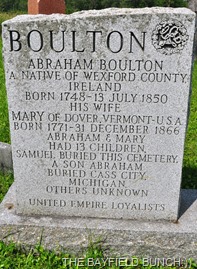 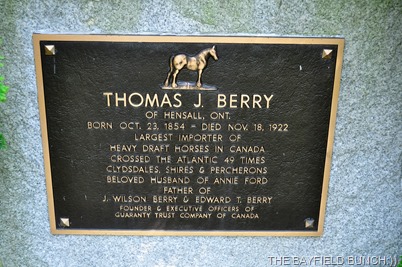 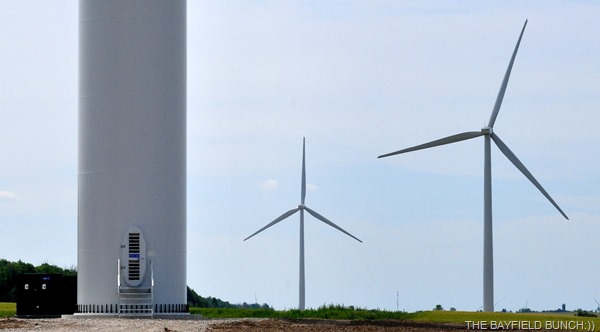 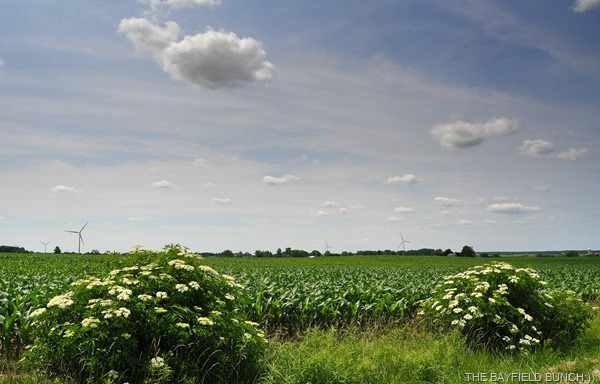 Thought I would throw in a few pics of my camera/telescope set-up in case anyone was interested in seeing what I was using to take a few of Thursday night’s photos. 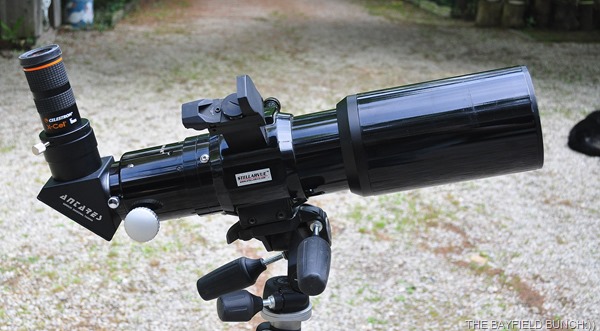 SCOPE CONFIGURED AS A TELESCOPE 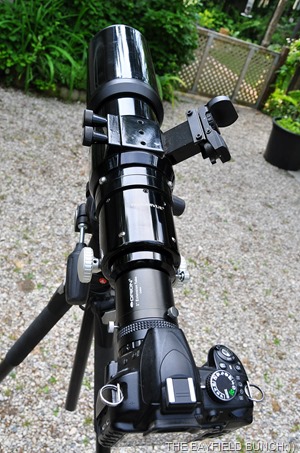 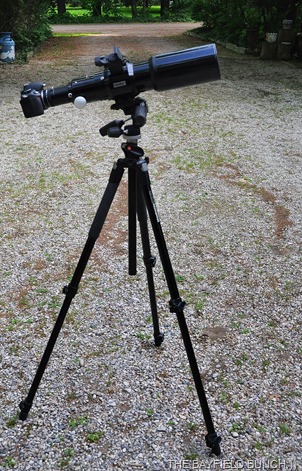 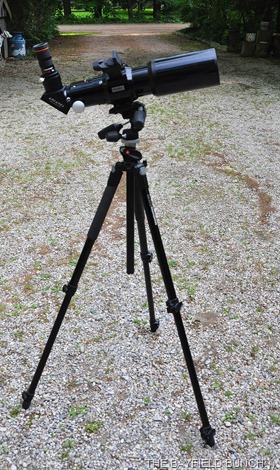 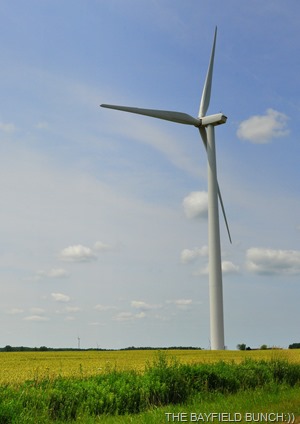 I wouldn't call myself a news junkie but I am in the habit of keeping in touch with what is going on in the world & what is going on around me.  For me it is television news which is most convenient & several times a day I flip on an hourly news channel to see what is happening with the world's latest madness .  And yes I have to use the word 'madness'.  For anyone staying in touch with global events I think they will understand what I am saying.  Of course there is a relatively easy solution to this.  Simply do not watch, listen to, or read the news.  Just ignore what you do not want to hear.  Block out all the bad stuff & simply live in a bouncy little happy bubble.  Convince oneself everything will be fine.   What you don't know won't hurt you right?  Wrong!!   Having a reality based interest in things my thoughts may differ from many others but  the looming, ongoing, & growing madness in the world right now is plainly staggering.   It takes me back to our Boy Scout's motto many years ago.........Be Prepared!! 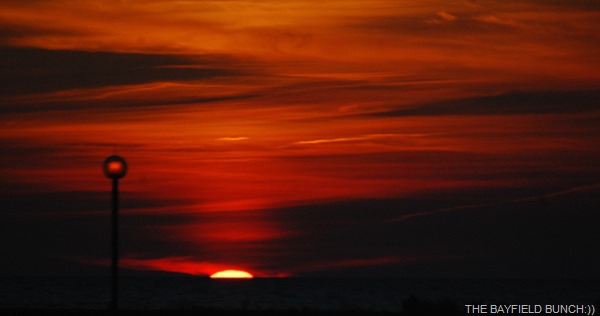 GROANER’S CORNER:(( A father finds his four year old daughter outside brushing their dog's teeth using his toothbrush. Dad asks, "What are you doing with my toothbrush?"
The daughter replies, "I'm brushing his teeth. But don't worry dad, I'll rinse it out when I'm done just like I always do."

With animated movies like "Antz" and "A Bug's Life", I wondered: do their characters have soliloquies, or do they have pest asides?

A newlywed farmer and his wife were visited by her mother, who immediately demanded an inspection of the place. While they were walking through the barn, the farmer's mule suddenly reared up and kicked the mother-in-law in the head, killing her instantly.
At the funeral service a few days later, the farmer stood near the casket and greeted folks as they walked by. The pastor noticed that whenever a woman would whisper something to the farmer, he would nod his head "yes" and say something. Whenever a man walked by and whispered to the farmer, he would shake his head "no" and mumble a reply.
Curious, the pastor later asked the farmer what that was all about. The farmer replied, "The women would say, 'What a terrible tragedy' and I would nod my head and say, 'Yes, it was.' The men would ask, 'You wanna sell that mule?' and I would shake my head and say, 'Can't. It's all booked up for a year now.'"