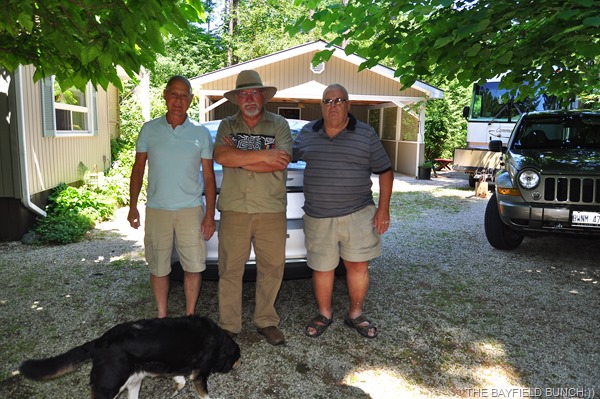 Two of my old Tavistock buddies rolled into our driveway at 9 a.m. this morning.  Brothers Jim & John Eifert were here to pick me up for an old memory lane tour down through Grand Bend, Port Franks, & Kettle Point.  It was the early & mid 60's when the three of us along with half a dozen other guys hung out together & it was this section of Lake Huron shoreline that held some of our best memories.  These were our 'Happy Days' times growing up. 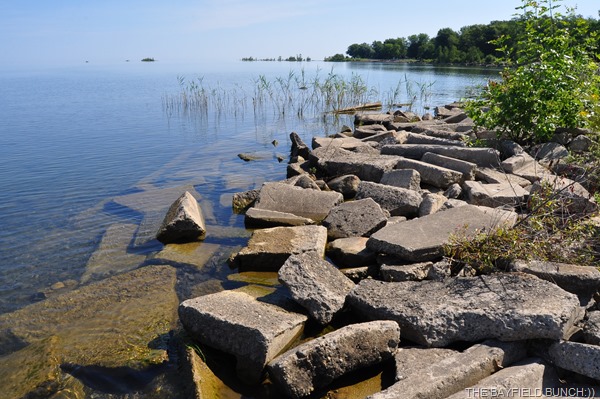 LAKE HURON SHORELINE AT KETTLE POINT
Readers may remember Jim & John from the time they & another good buddy, Helmut Hell from our teen age days tracked me down in Bayfield about 3 summers ago.  With another good home town Buddy, Gary who was living in Bayfield at the time we all had ourselves a great reunion reminiscing about good times one afternoon.  Late last summer I received an email from Jim saying our friend Helmut was very ill with cancer & not likely to last another few months.  With that Jim drove to Bayfield, picked me up & we picked up his brother John in Stratford & all headed to New Hamburg to see Helmet for one last time.  Readers may remember that post.  Jim emailed me several months later while we were in Congress Arizona saying Helmut had passed away.  Readers may remember my post from that day as well.

IT WAS HARD TO SEE WHERE THE PLACID COOL WATERS OF LAKE HURON MET ONTARIO’S HOT & HAZY SKY THIS MORNING
Fast forward to now.  Jim emailed me again a couple weeks ago saying him & brother John would like to pick me up this morning & take a drive through some of our old lakeside haunts & that is what we did.  Just like old times as we drove along kibitzing & remembering this & that.  A drive down Grand Bend's main drag & around the beach brought back old stories & 50 year old recollections.  Further down the highway passing PINERY PROVINCIAL PARK we shared more memories of zany times in there as well. 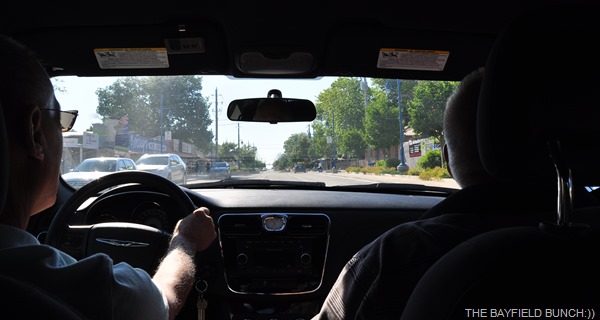 CRUISING GRAND BEND’S MAIN DRAG JUST LIKE WE DID WAY BACK IN THE EARLY TO MID 60’S
A beautiful mid summer morning as we continued our memory lane drive south down highway 21 through a another sleepy lakeside resort place called Port Franks.  It was at a cottage & surrounding area in Port Franks we recalled some of our best memories.  It was at this cottage we all watched the Beatles first performance on Ed Sullivan half a century ago.  Cottage at the time was owned by our good friend Gary's parents & we would often go there during high school’s winter break between Christmas & New Years.  We always referred to it as 'Burton's Cottage.  The area is all built up now & about the only thing recognizable from the old days is Burton's cottage itself.  Although remodelled it was still very recognizable to us as we turned around in the driveway & continued on our journey.   Some readers may remember a similar trip another good Tavistock buddy, Craig Wilker & I made late last September along the same route Jim, John, & I were taking this morning. 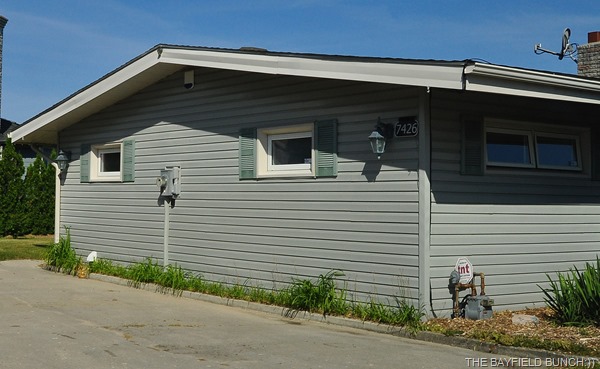 COTTAGE HAS BEEN RE-SIDED & A CEMENT SURFACE REPLACES THE SANDY DRIVEWAY
Driving south through an old army camp base we searched in vain for familiar landmarks from the days we hiked so many times in that area back in the early 60's.  Nothing was familiar due to the many homes & new cottages that have sprung up over the last 5 decades.  We continued heading south continually reminiscing about those good old late teen-age days from years gone by.  We were headed for a place on the Lake Huron shoreline called Kettle Point & stopped there for a leg stretch before heading back to Bayfield.  We all had memories of Kettle Point as well.  More laughs, more kidding around, more kibitzing, & more reminiscing. 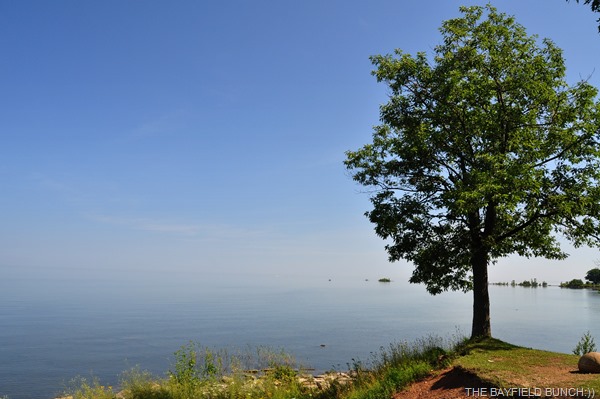 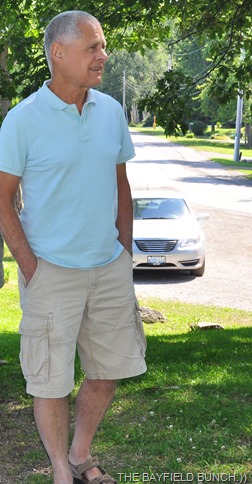 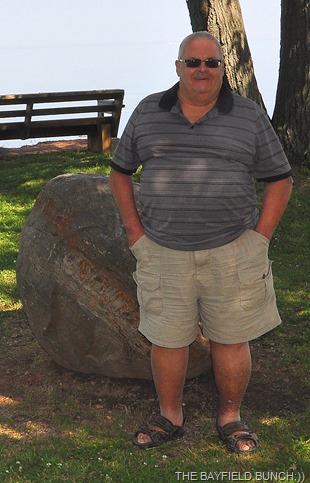 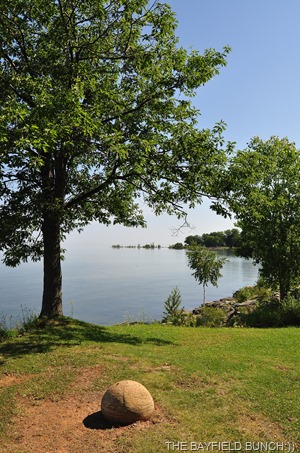 From Kettle Point we headed on back to Bayfield as the heat & humidity of the day ramped up.  Jim in his email a week or so ago had said he & John wanted to take Kelly & I out for lunch so we picked up Kelly & all headed back into Bayfield to a popular eatery called, 'The Docks'.   More laughter as we joked around just like we used to do back in our high school days.  Food was good & soon it was time for the brothers to be heading back home again.  Jim to London & John from Jim's place back to Stratford Ontario.  I quick tour through our Motorhome, a few last photos, & the Eifert brothers were on their way.  Thanks for a great morning guys & thanks for buying us lunch.  C-ya next summer:)) 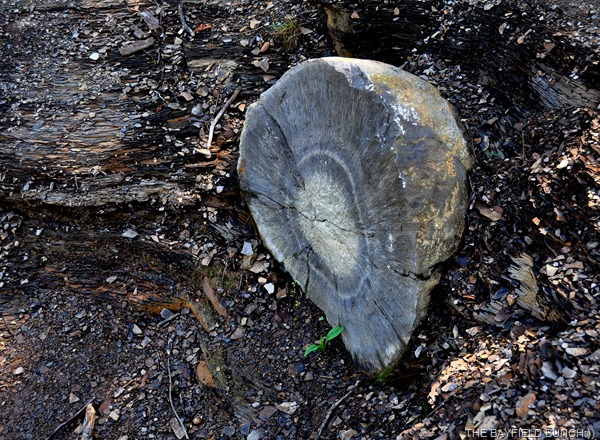 How nice to spend a few hours with old friends.  I sometimes forget about things like that in my solitary ways…………………………. 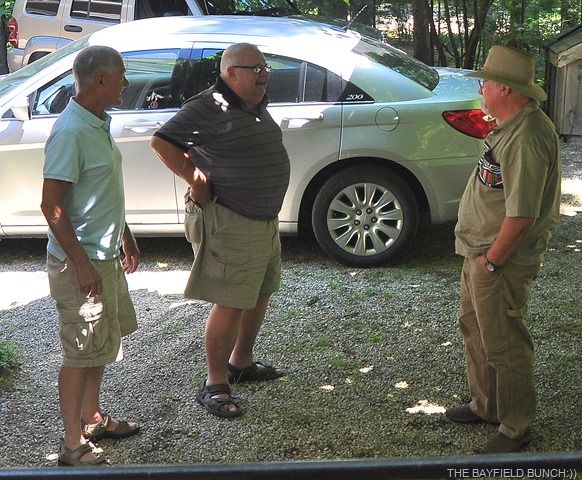 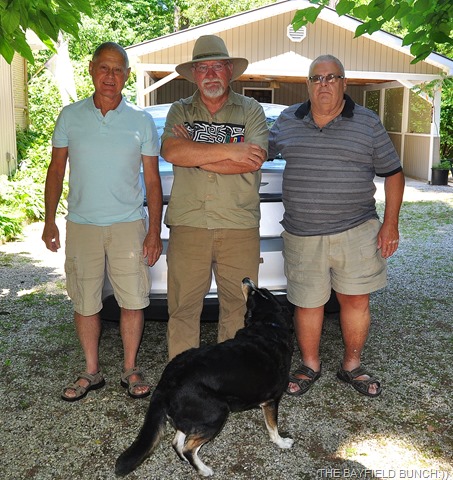 GROANER’S CORNER:(( The elevator in our building malfunctioned one day, leaving several of us stranded. Seeing a sign that listed two emergency phone numbers, I dialled the first and explained our situation.  After what seemed to be a very long silence, the voice on the other end said, "I don't know what you expect me to do for you. I'm a psychologist."
"A psychologist?" I replied. "Your phone is listed here as an emergency number. Can't you help us?"  "Well," he finally responded in a measured tone. "How do you feel about being stuck in an elevator?"