CLEANED SOME GUTTERS, MORE DRIVE-BY’S & WHAT WILL IT BE-FLICKR, PHOTOBUCKET, SMUG MUG, OR GOOGLE’S WAY……….. 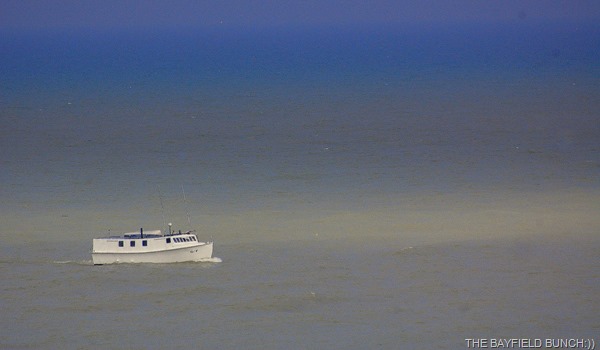 APPROACHING STORMS SEND THIS LONE FISHING BOAT SCURRYING FOR THE SAFETY OF BAYFIELD’S HARBOR THIS MORNING
Had noticed clumps of pine needles sticking out of our eaves Tuesday so this morning it was out with a tall step ladder & a garden hose to clean the eaves troughs.  Always a messy bit of business but an hour later it was done.  Thank heavens we don't have a second story house with tall eaves or we would have to have someone come in & do it.  Leaning shaky ladders against buildings & climbing up them is not something I will do.  I'm sure we all know of older fellas still thinking they are younger fellas & toppling off ladders to sometimes dire results. 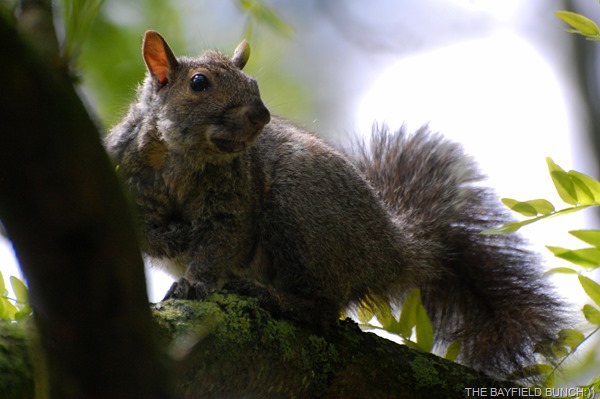 OUR LARGE SUNROOM WINDOWS ARE NOT ONLY FOR US LOOKING OUT BUT FOR OTHERS LOOKING IN
Weather was unstable all day with thunder rumbling out over the lake, rampant wind gusts, & a few pockets of fast moving rain followed by bursts of sunshine.  Saw a tornado advisory pop us somewhere early in the afternoon.  Had been totally enjoying our cooler humidity free days up until today.  It had been great for working away on outside projects.  Looks like we are headed back into hot & sticky again.  Arrrgggghhhhhh!! 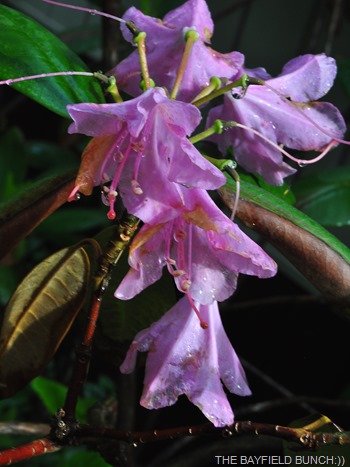 Still trying to get a handle on some kind of an easily understandable photo album program.  I'm sure once I am able to wrap my head around one of the them I will be good to go & finally have this problem behind me.  Spent a fair bit of time today reading about Smug Mug, Photo Bucket, Flickr, & Google's way of doing things.  Google is out because it involves having to get tangled up in all that Google+ social media swirl & I have totally no interest in all that stuff.   Back & forth between Photo Bucket, Smug Mug & Flickr.  Flickr seems to be the most popular & Flickr Pro seems like it might be the one to go with.  Sat for awhile this afternoon banging away on the Flickr site but it's frustrating when your an impatient slow learner like myself.  Like sitting down with a thousand piece puzzle & not understanding why I can’t have it all together in 5 minutes. 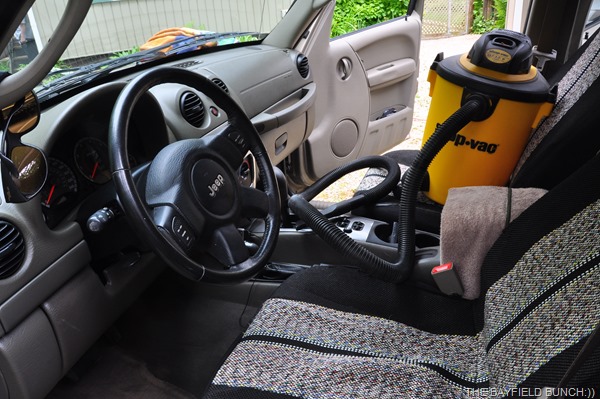 TUESDAY’S VACUUMING UP OF MUFFIN CRUMBS 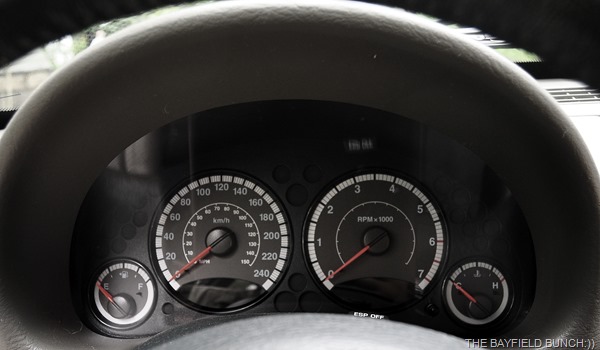 NEVER DID LIKE OUR WRANGLER’S DASH MUCH BUT DO LIKE THE LAYOUT & SHAPE OF OUR JEEP LIBERTY’S DASH
Sure have been amassing me a pile of photos here these last few days so that means I have a lot of photo editing to catch up on.  Thinking I might get some storm photos out over the lake Pheebs & slipped into Bayfield this morning but the dark clouds dissipated & that was that.  We did cruise around a few streets doing a few more house/property drive-by shootings though. 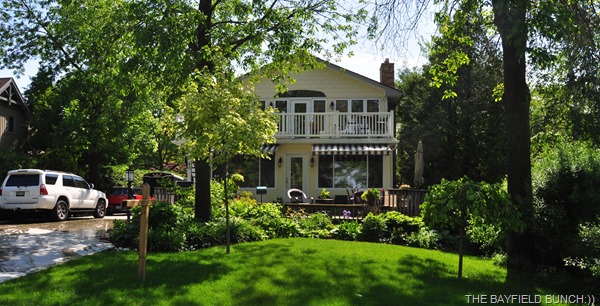 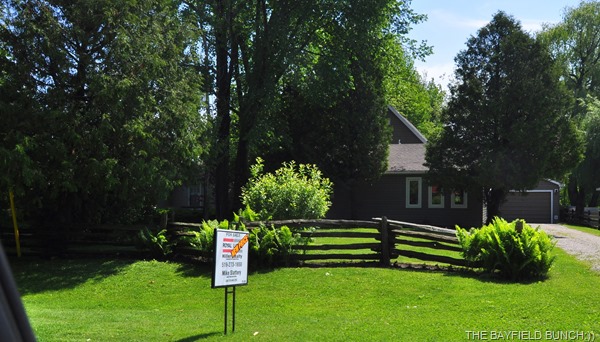 AND BY GOLLY THAT’S MY FRIEND GARY’S HOUSE FOR SALE:)) 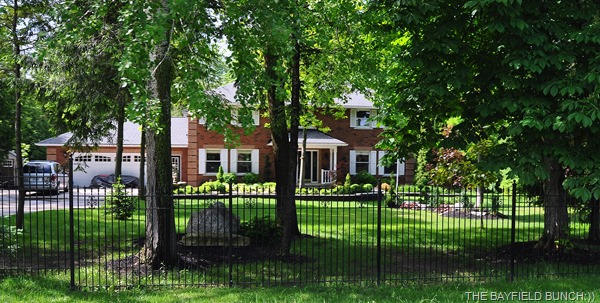 Is it just me or does Live Writer seem to be publishing faster since the great debacle with Blogger.  Maybe it’s just my wishful thinking again but it does kinda seem that way to me. 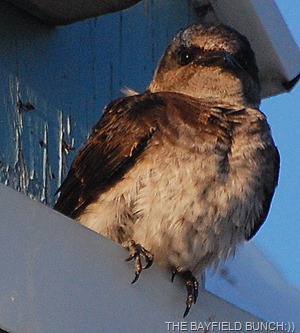 <<< THIS BIRD IS PERCHED ON THE BALCONY OF A MARTIN HOUSE SO I AM ASSUMING IT IS A FEMALE MARTIN…IF NOT A MARTIN THEN IT MUST BE AN INTERLOPER
Kelly dropped into the Goderich Visitor Center today & loaded herself up with a bunch of brochures on area activities.  Looks like we will be adding a Nuclear Power Plant & a fascinating Ice Culture Company to our growing itinerary of things to see & do this summer.  Here's a little taste of the Ice Culture Company.....'Ice Culture began 30 years ago as a hobby & today the company is one of the largest players of the ice industry around the world.  This small Ontario company operates an exciting business that takes staff around the globe attending international events & elaborate gala functions'.  Groovy eh:)) 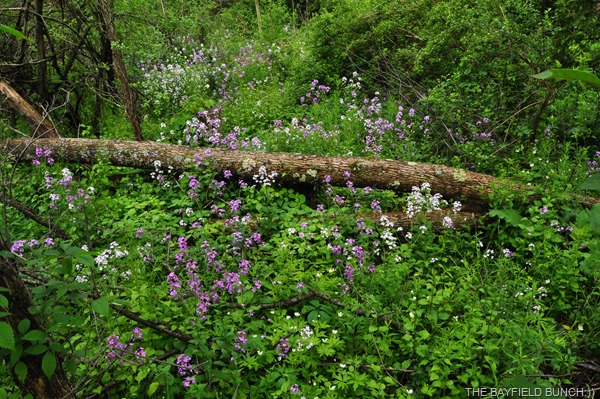 BANNOCKBURN CONSERVATION AREA
GROANER'S CORNER When the doctors were told to contribute to the construction of a new wing at a hospital:
The allergists voted to scratch it.
The dermatologists preferred no rash moves.
The gastroenterologists had a gut feeling about it.
The micro-surgeons were thinking along the same vein.
The neurologists thought the administration had a lot of nerve.
The obstetricians stated they were laboring under a misconception.
The ophthalmologists considered the idea short-sighted.
The orthopedists issued a joint resolution.
The parasitologists said, "Well, if you encyst".
The pathologists yelled, "Over my dead body!"
The pediatricians said, "Grow up".
The proctologists said, "We are in arrears".
The psychiatrists thought it was madness.
The surgeons decided to wash their hands of the whole thing.
The radiologists could see right through it.
The internists thought it was a hard pill to swallow.
The plastic surgeons said, "This puts a whole new face on the matter".
The podiatrists thought it was a big step forward.
The D.O.s thought they were being manipulated.
The urologists felt the scheme wouldn't hold water.
The anaesthesiologists thought the whole idea was a gas.
The cardiologists didn't have the heart to say no.
And the otologists were deaf to the idea.
Obviously the hospital's new wing never got built!!
Posted by Al Bossence at 6/10/2015