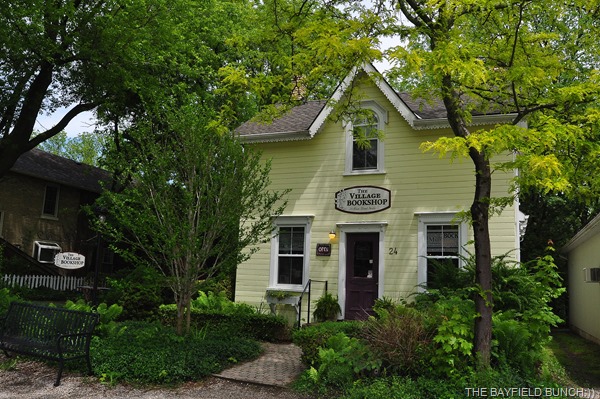 With the amount of rain that has come down in the past 48 hours & a comment in our Shout Box mentioning how it has not been a good thing for local farmers I figured Pheebs & I had better head out this morning & have us a look.  Did see some water pooled in low spots & all the area creeks & rivers are over their banks but overall most fields we saw looked intact.  Another comment in the Shout Box said, what farmers'.  If I'm not mistaken I think Southwestern Ontario here is known as the dairy capital of Canada so in simple terms that means farmers & lots of them.  Our rural countryside is crisscrossed with farm fields for as far as the eye can see.  Probably more farms here per square acre than anywhere else in Canada.  Yep we are a large population of farm type folks alright:)) 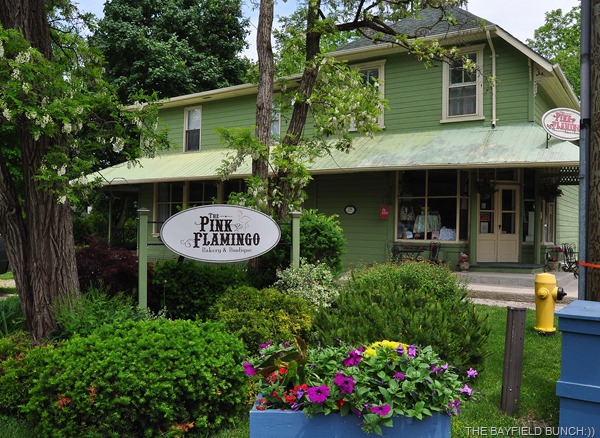 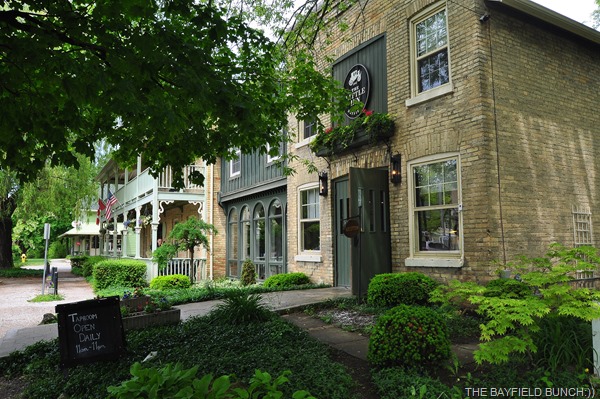 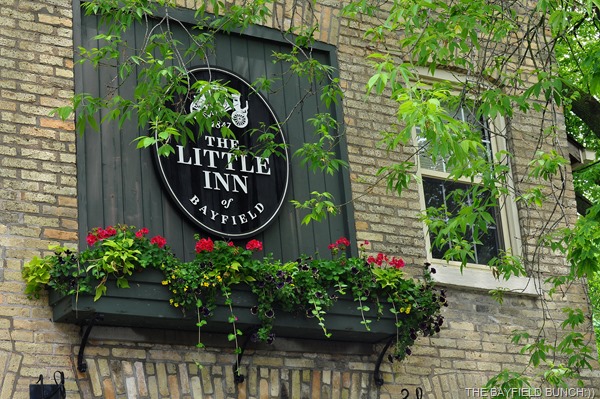 A FAVORITE DESTINATION OF MANY A TRAVELER 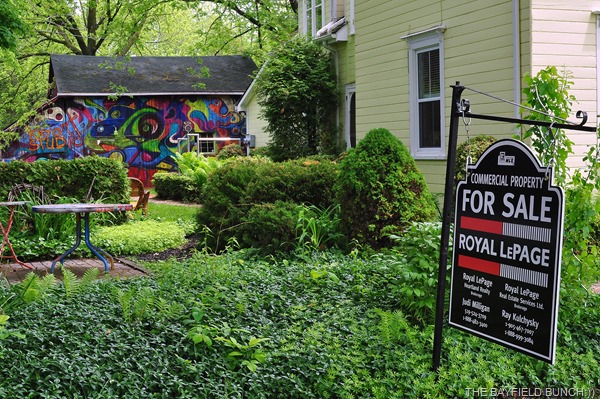 AND BY GOLLY HERE’S A COMMERCIAL PROPERTY FOR SAIL ON THE MAIN STREET & YOU EVEN GET THAT COLORFUL BARN:))
Before hitting Clinton's Tim Hortons this morning Pheebs & deeked down to the south end of town to have a look at a time schedule.  In Sloman Park there is parked a single train car complete with a school room & living quarters inside.  I wanted to check out when it's open.  It's been quite a few years since I've gone through it so I want to do some photos & a little write up about it sometime in the near future.  Bit of a fascinating story behind this train car.  Stay tuned.

IN NORTHERN ONTARIO THIS WAS ONCE A SCHOOL HOUSE ON WHEELS 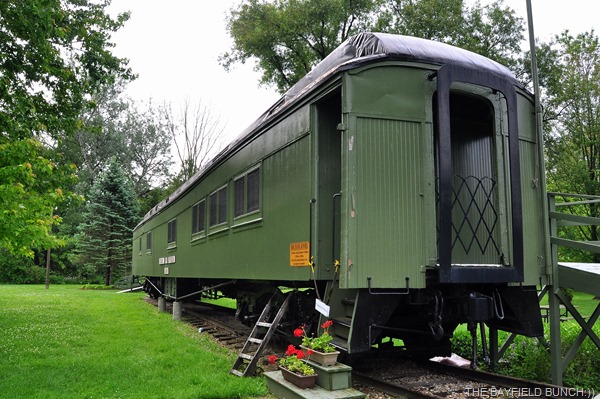 Clinton Ontario was founded in 1831 & was known as Canada's home of radar and has a huge radar antenna in the downtown due to its association with RCAF Station Clinton during World War II.  There are still some remnants of the old radar base & this morning Pheebs & cruised around taking some photos of what is recognizably left & what the air base has since become.  I will also be doing a little write up with photos on this little project as well. 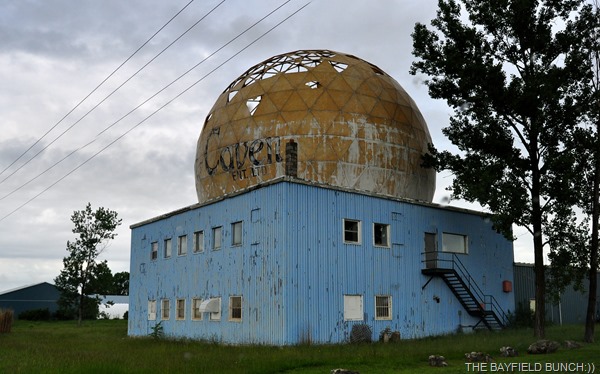 From Clinton it wasn't far to a conservation area called Bannockburn.  It was cool enough this morning to head off for a hike without being bothered by swarms of pesky bugs.  Bannockburn has a marshy section with a shallow creek running through it.  Imagine my surprise this morning when I found not a slow shallow meandering clear creek but a raging full blown muddy river ripping through the marsh.  I had forgot about our deluge of rain over the past couple days.  We didn't get too far before the trail was totally underwater so we had to cut our walk short. 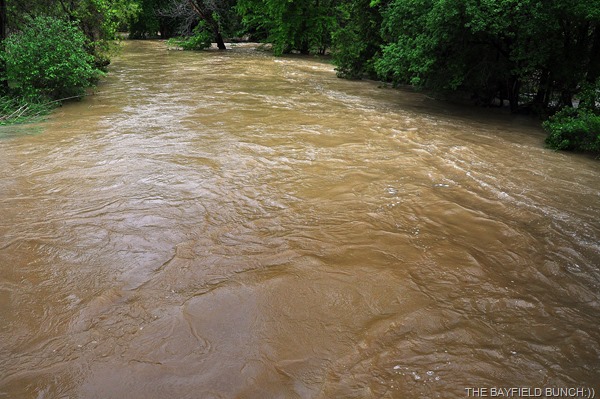 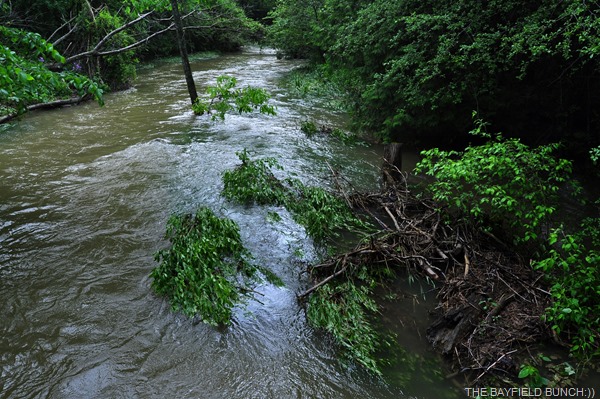 THIS IS NORMALLY A DRY LAND AREA 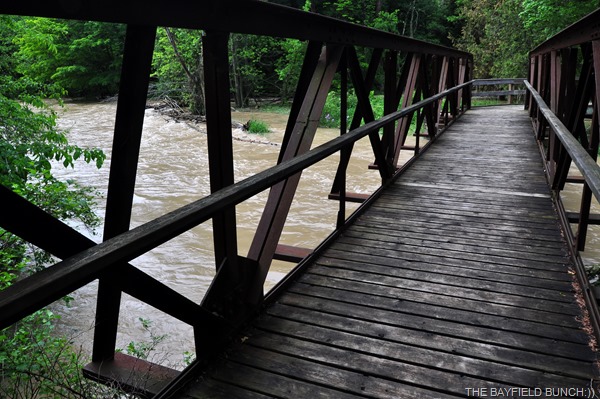 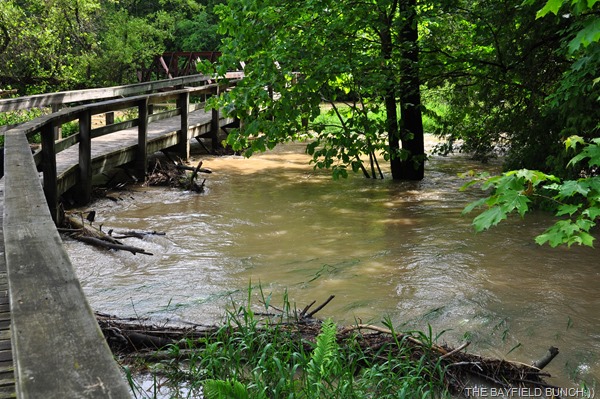 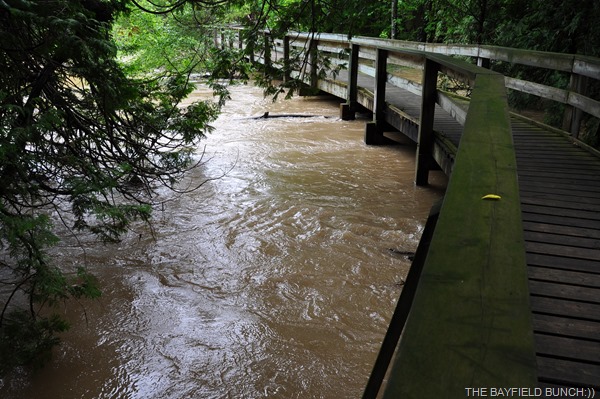 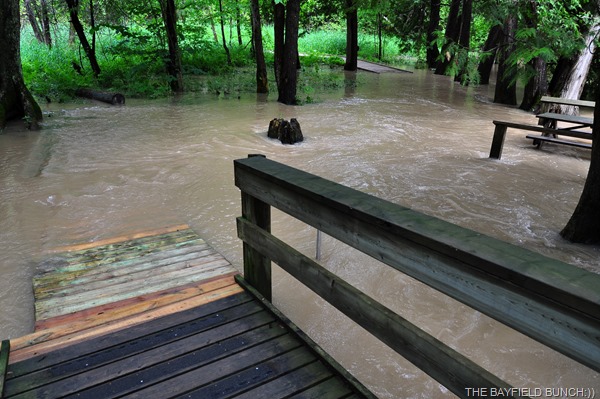 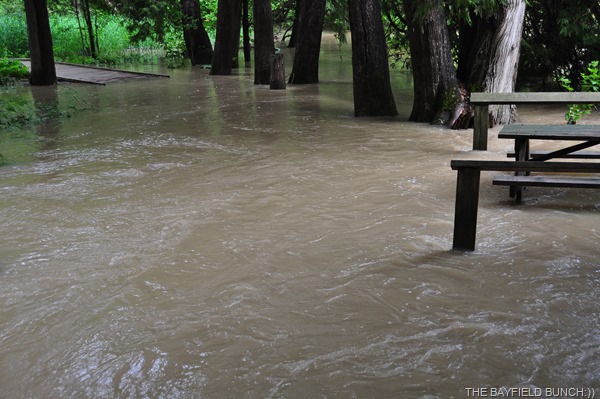 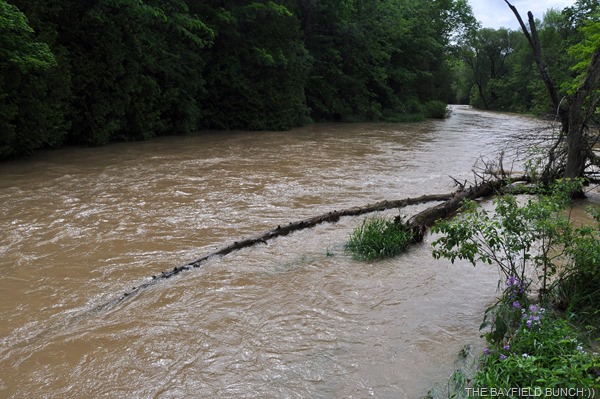 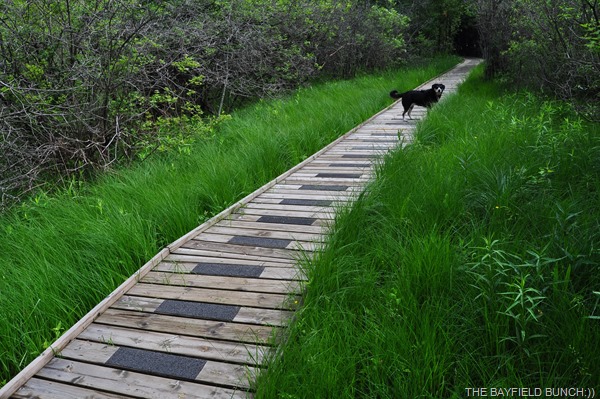 WE WERE SOON MAKING OUR BACK TO THE JEEP ALONG THIS BOARDWALK THROUGH THE MARSH
Back in Bayfield 10 minutes later we cruised a few streets while I took more photos of homes & properties for my 'Bayfield File.'  A stop at Pioneer Park high atop the cliffs overlooking Lake Huron brought another surprise due to our recent rains.  Tons of earth washed out of farmers fields had turned area creeks & rivers a chocolate brown color & that chocolate brown water had tumbled down the Bayfield River & out into the pristine blue green waters of Lake Huron.  The emptied brown earth & silt laden river water stretched for nearly as far as the eye could see out into the lake.  I had never seen that before.  Even all the sailboats at their moorings along the river were sitting high up against their docks.  Yes, quite a rain indeed. 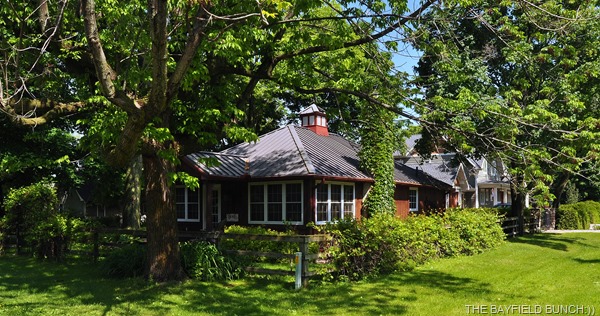 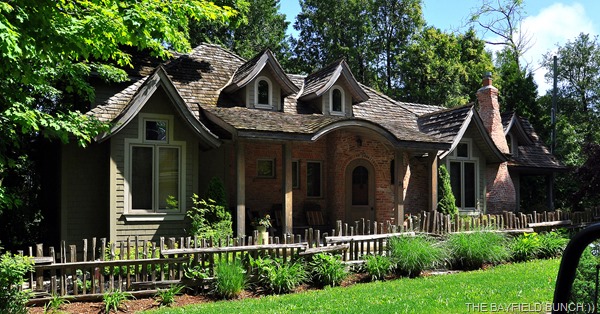 JUST GOTTA LOVE SOME OF THE GREAT STYLISH ARCHITECTURE IN BAYFIELD 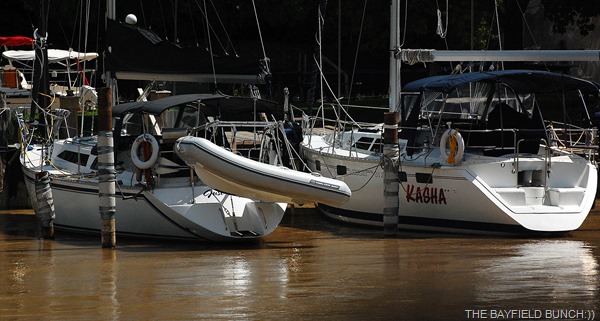 LOOKS LIKE THESE SAILBOATS ARE SITTING IN CHOCOLATE MILK 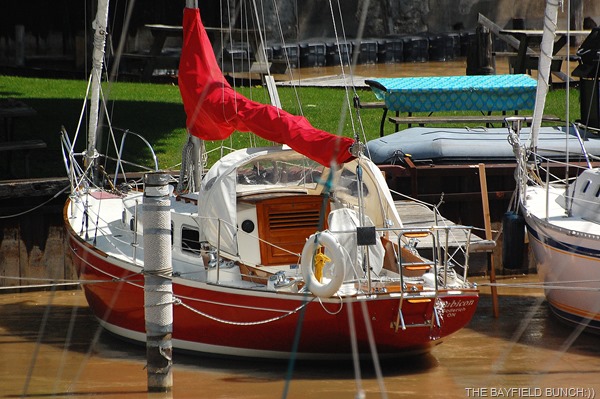 In my Monday post Linda A. asks…..’What a pretty village is Bayfield ! Are the pictures you are showing from the 'old town' section of Bayfield or is this it....... The village’?  My photos were along the west side of Bayfield’s main street which is basically about 3 blogs long.  This is the original town site which today is designated as a Heritage street.  Some buildings here in the core date back to the 1800’s.  From this center hub Bayfield branches out with many homes located between between the town & Lake Huron about half a mile to the west.  Two blocks east of the main street highway 21 rolls through in a north/south direction & along this highway are the town’s main everyday business’s.  Bayfield’s core where I took & the photos is the town’s main attraction with it’s artsy shops, fine dining, boutiques, arts & crafts, etc.  During summer months people come from miles around to walk & browse the main street.  Bayfield’s natural harbor is also a huge draw for sailboat folks with both sailboats & powerboats coming in from far distant shores. Many boats sail in from Michigan across the lake.  In my Bayfield photo project which I now have underway I intend to do a bunch of photos down around the harbor area as well.  You can see why I am anxious to get this whole ‘photo album’ thing figured out. 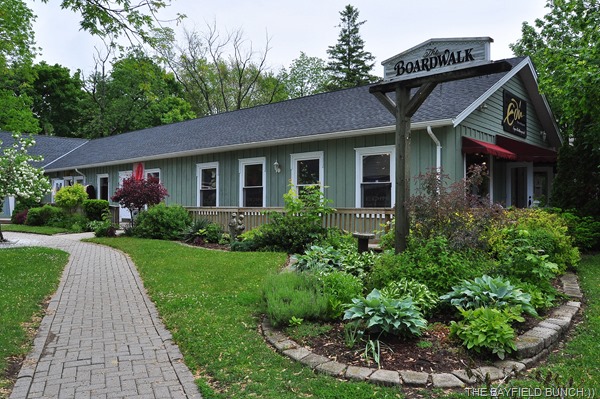 Tina in our comment section left the following comment in my Monday post….."I LOVE the photo of the outdoor patio with the brightly colored privacy screens (orange flowered, orange and white, green and white etc). Could you tell me the name of the place that had these in their decor? We are looking for something like that for a privacy screen for our garden in Arizona and would love to track them down by calling the establishment and asking where they found them”.  Name of the place is the Artsy Cafe & was one of Kelly’s favorite eating places when she worked at Deer Park Lodge.  Photo below shows a man sitting outside the Cafe.  I had no idea who this man was & took the photo because I liked the composition, his orange shirt, & the big map.  Turns out he is the owner of the Artsy.  When Kelly saw this photo she knew who it was right away & put this photo in on her Facebook page.  She later bumped into this fellow today & is going to go back to the Cafe & ask him where they got those colored privacy screens.  So stay tuned Tina & maybe we’ll have an answer for you shortly.  And before I forget Stewart (Furry Gnome) I did remember today your question about the sailing schedule for great lakes boats coming & going from the Goderich harbor.  A fellow in Goderich told me the site a few weeks ago but I’ll have to get in touch with him again because I forgot it. 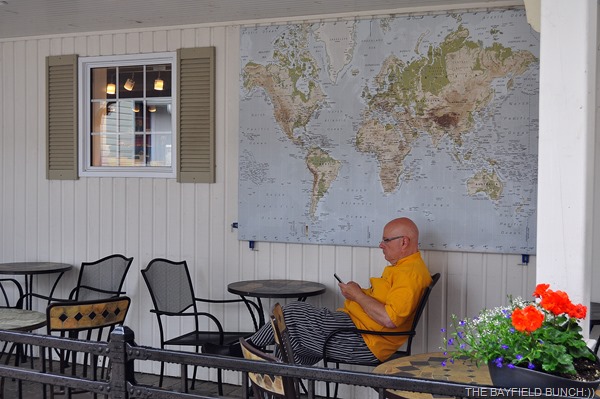 THE FELLOW IN THIS CANDID PHOTO HAPPENS TO BE THE OWNER OF THE ARTSY CAFE
Again Pheebs & I were home before noon & how nice to once again be under clearing sunny skies.  Figured it was a good time to vacuum the multitude of muffin crumbs out of the Jeep.  First I emptied my shop vac & gave it a good scrubbing cause I figured I could suck up enough muffin crumbs to build myself another whole muffin.  And I did but what I hadn’t figured on was all the dog hair I sucked up as well.   Oh what a time I had picking all the dog fur out of the muffin crumbs before I could assemble myself a new muffin & re-heat it in the micro-wave:)) 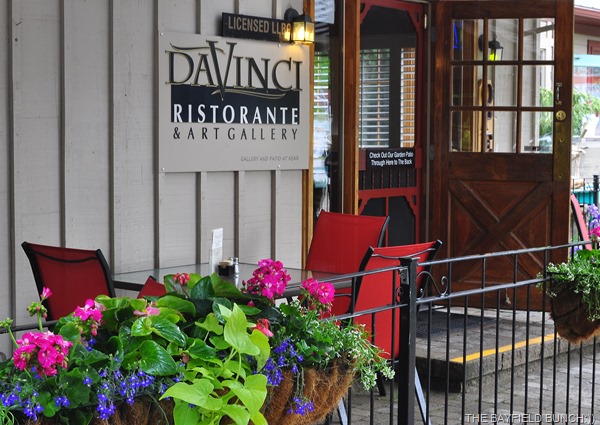 AND THIS IS KELLY’ FAVORITE COFFEE SHOP IN BAYFIELD 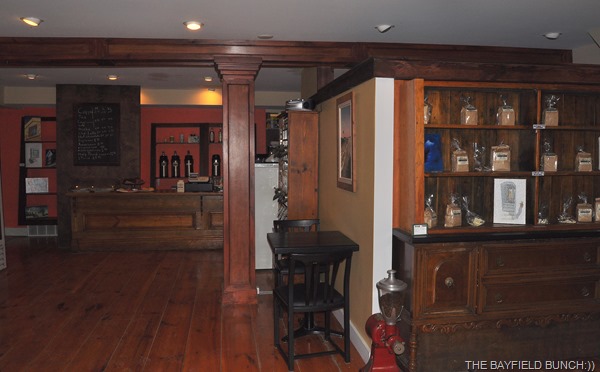 GROANER’S CORNER:(( And remember, Never explain yourself to anyone  because the person who likes you doesn't need to hear it and the person who dislikes you won't believe you anyway.....And for sure you know your getting older when you & your teeth don't sleep together anymore!!