AFTER THE ROAR OF AIRPLANE ENGINES A COUPLE DAYS AGO PHEEBS & I WERE NEEDING SOME QUIET TIME PLUS MY ‘SKYHAWKS’ PHOTO ALBUM………….. 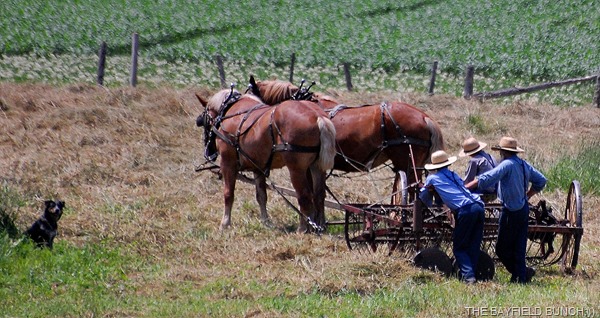 Weather people in our area are calling for a totally miserable week-end with colder temperatures & lotsa rain.  With that thought in mind I tossed the cameras in the car, loaded up the little Boogers, & off we went.  Figured we had better get a little back road traveling time in while the sun's shining & the weathers good.  Time was 8:30 a.m. 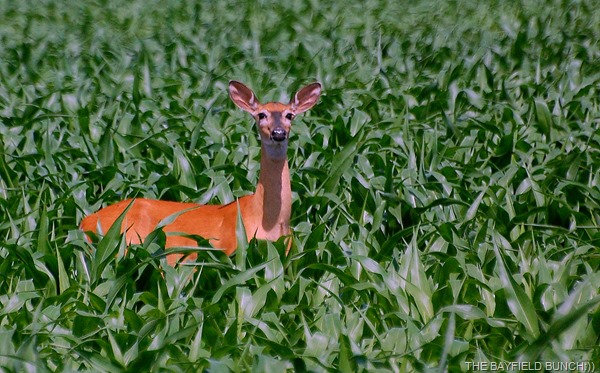 SPOTTED US THIS DEER IN A CORNFIELD 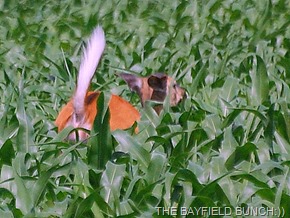 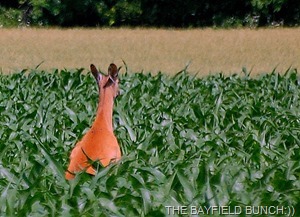 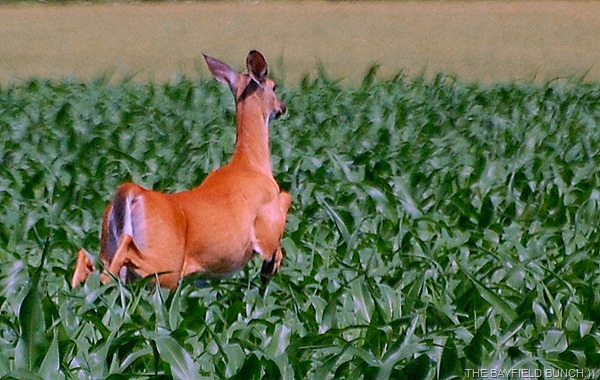 Clinton Tim Hortons for our usual & from there it was over to a little place called Egmondville which is attached to the south end of Seaforth Ontario.  There is an old historic brick house there & one which I have driven past for decades but never stopped in to have a look at it.  Kelly had picked up some brochures from the Goderich Visitor Center awhile back & with that brochure Pheebs & pulled in the driveway of the stately VAN EGMOND HOUSE.  Although not officially open for the summer until July 6th a caretaker fella by the name of Dave came out & said it was alright for me to go ahead & have a look through the house.  How nice to leisurely stroll around by myself inside taking photos without a lot of people milling about.  Always nice to catch a welcome break.  Dave & another fella were outside up on ladders working on the house so I finished up my photos & I Pheebs & headed for the cemetery just up the street.  Dave said that's where I'd find the original inhabitants of the house.  I will have more to say plus additional photos about this house in a later post.  Not sure but I think I do remember some stories going around years ago about this house being haunted.  Hmmmmmmm. 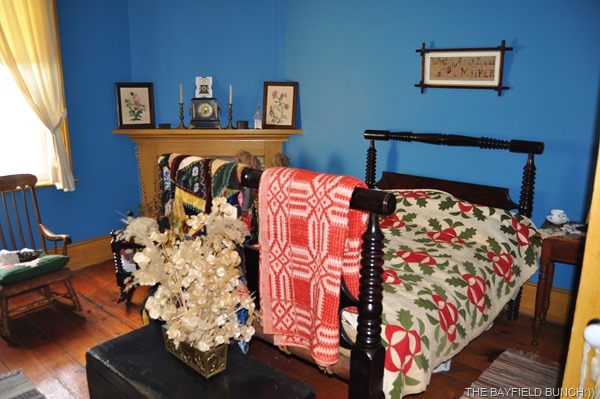 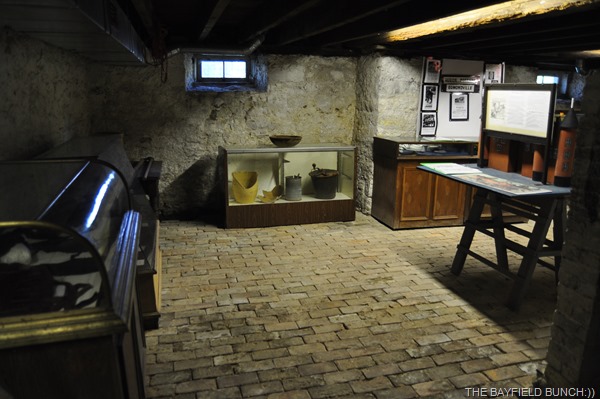 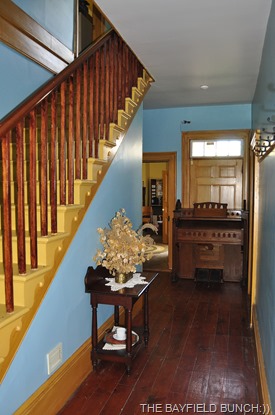 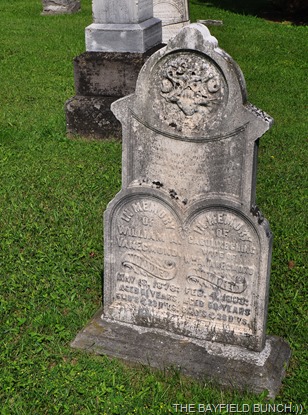 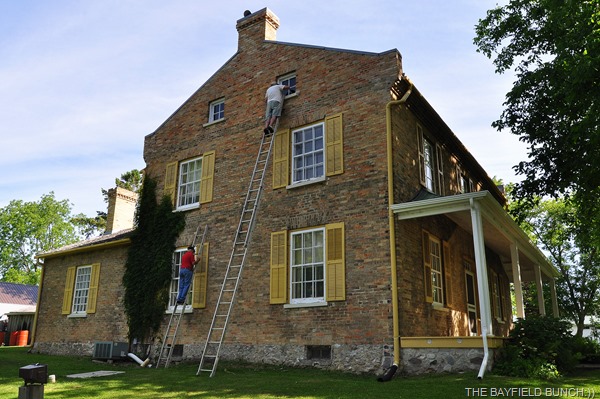 From Egmondville/Seaforth we moseyed our way along some gravel roads heading north totally enjoying the fine weather morning we had going for us.  Added another dozen or more old barns to my growing 'old barns' photo files.  By 11:30 both Pheebs & I were feeling a bit hungry so being close to Wingham Ontario we slipped the back way into town & headed for Subway.  Pheebs wanted to try something different so we agreed on a ham & cheese Sub with all the usual fixins.  Wasn't long & we again had ourselves in quite a mess.  Sub sauce on the steering wheel, sub sauce on my shirt, & sub sauce on the Pheebs.  Maybe if we had just sat in the parking lot to eat it we might have been alright but I was anxious to get out of town & back into the countryside again so we ate it on the run.  Lettuce in my shoes, tomatoes on my pants, green peppers on the seat & cheese stuck to the roof of Pheebs mouth.  Oh we have ourselves quite the time when we're out & about & neither one of us would have it any other way.  I can shovel the rest of the Sub droppings out of the Jeep next time I clean it:))

AND PHEEBS HAD SOME HORSES MAKING EYES AT HER TODAY 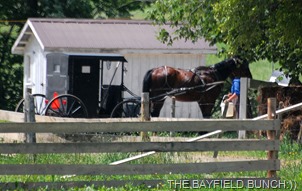 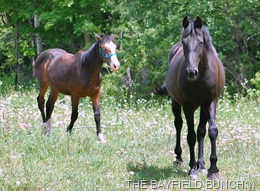 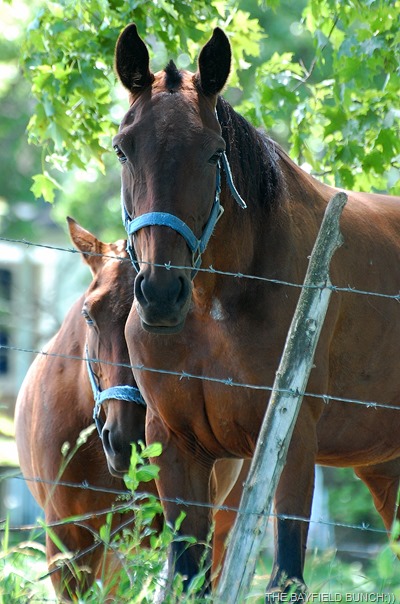 From Wingham we set a course for home & took our sweet time meandering along the quiet gravely roads.  A few more barn photos plus we stopped at one of Pheebs favorite places, Lake Wawanosh.  Time to get her paws wet again.  But only her paws.  Ankle deep is maximum depth for Pheebs & that's it.  With windows full down & a mixture of hair & fur blowing around all over the place we finally made our way back to Bayfield about 1:30. 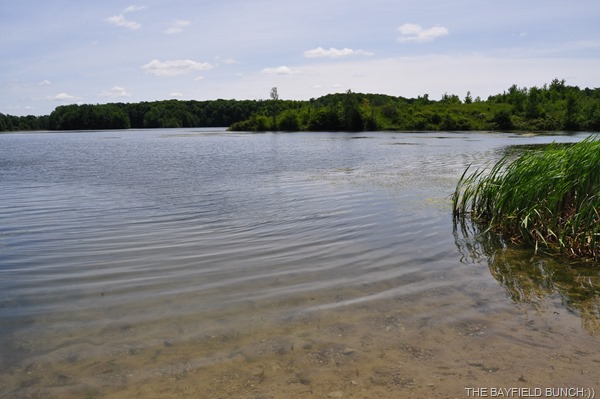 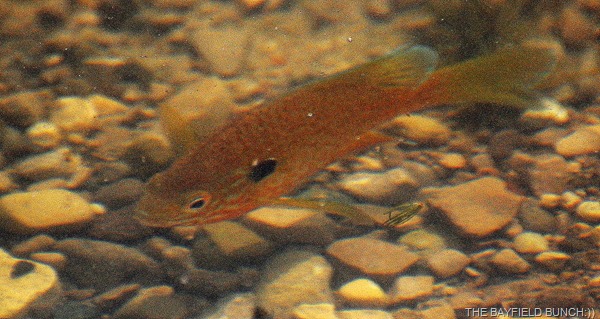 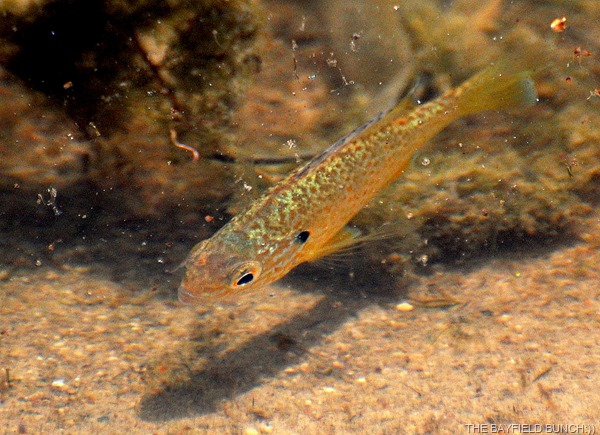 Kelly called Dometic about our rig's ongoing & perplexing refrigerator problem this morning & although the fridge is a few weeks over it' 2 year ‘new fridge warranty’ date the lady at Dometic said for us to get the rig into a Dometic dealer as soon as possible & get it registered.  She said even though we are slightly past the warranty date Dometic is pretty good about extending the warranty for a wee bit.  Several Dometic authorized dealers in our area were mentioned & we decided to go with a place southeast of London Ontario called GAMMONS RV - PARTS & SERVICE.  Dianne from STORMRUNNER RV SALES & SERVICE had emailed us this morning recommending them.  Kelly was in touch with Gammons today & had I remembered to turn my cell phone on this morning & received her calls trying to reach me we could have taken the rig in earlier today.  However, not being a 'phone head' I just never remember to turn the darn fangled thing on again.  As it stands we will taking the rig to Gammons first thing Monday morning.  Yahooie Louie another RV day trip:))  It's about an hour & three quarters drive & we'll be towing the Jeep because we may have to leave the rig there until they can figure out the problem with our fridge.  And figure it out once & for all I hope because this on again/off again annoying problem has been going on long enough!!!! 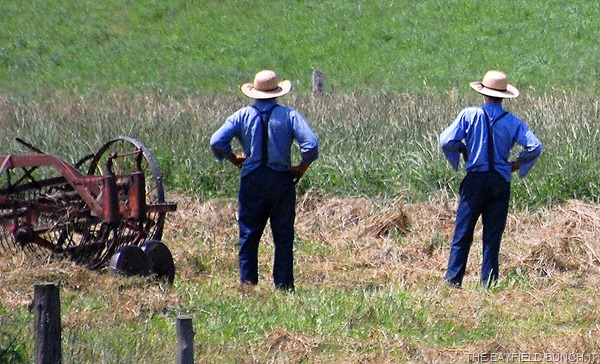 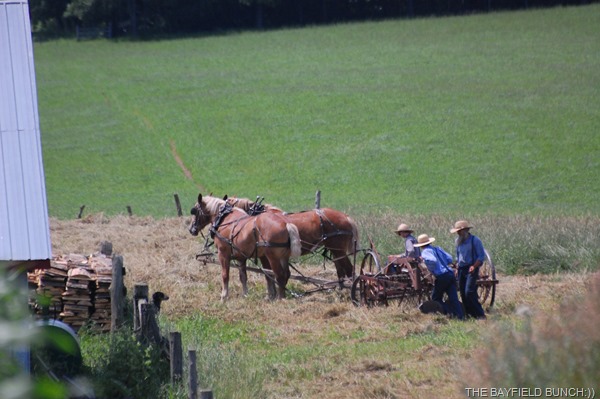 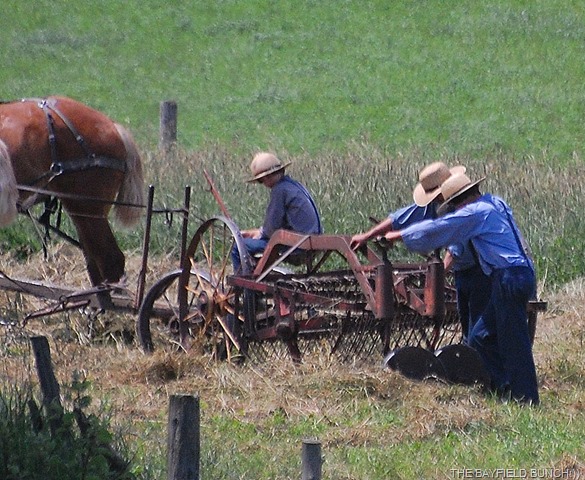 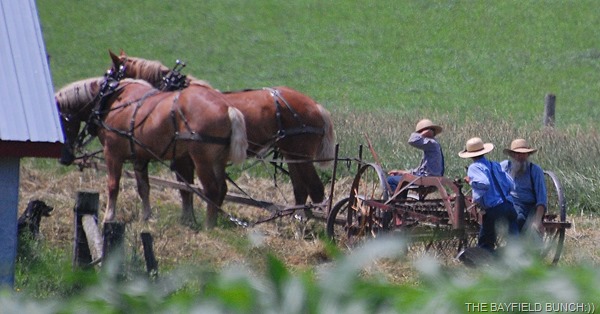 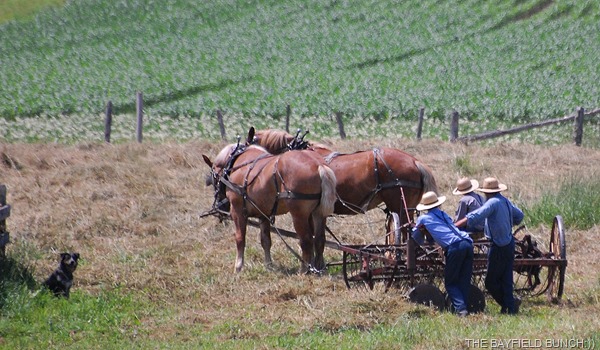 OH OH I THINK THE DOG JUST SPOTTED PHEEBS & IN THE JEEP…TIME GO GO
Wednesday at the Goderich Air Show & as mentioned in my Thursday post I was surprised to see the young parachutist fellas from the Canadian Forces SKYHAWK team encouraging the crowd & especially the children to gather around while they repacked their parachutes.  Readers may remember how in several past posts I have suggested to people not to bother a fellow RV'er when he/she is hooking up or unhooking their toads or trailers.  Distractions can cause accidents.  A crucial steel pin not inserted, safety chains forgotten, critical transmissions in toads not correctly configured, ignition keys not in the right position, etc.  There are any number of things an 'older' distracted 'aging' mind can & does forget.  And I have to emphasize the words 'older & aging'.   I thought of this as I walked around among the jumpers interacting with the public while they worked away at re-packing their parachutes.  How disciplined, focused, & confident must their young minds be while verbally & physically interacting with people while they go through all the absolute correct procedures to have their chutes open successfully for their next jump.  One mistake, one procedure out of place, maybe one less fold in a parachute, a couple chute lines crossed while attention is diverted by a question & the young man could be in some very serious trouble next time out of the airplane.  How amazing these fellows as I watched them joking with onlookers, encouraging kids to lay on their chutes helping to press trapped air out of the folds before packing all that silk into small parachute back packs.  True goodwill ambassadors for Canada's Armed Forces these fellas & how naturally friendly & personable their positive personalities.  Inspiring to say the least…………………. 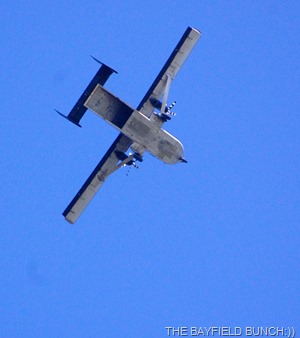 In tonight's Live Writer album are photos of the SkyHawks both in the air & on the ground.  I have included all the photos I took in the sequence I took them using 2 cameras.  Keep in mind there are 2 jumps going on here with one in the morning & one in the afternoon.  I have split the a.m. & p.m jumps with a jump plane photo about a third of the way through.

And thanks to Craig from MERIKAY'S DREAM for pointing out an error I made in my description of the Canadian Snowbird's performance in Thursday's post.  I have since corrected that & it's always helpful to have alert readers out here:)) 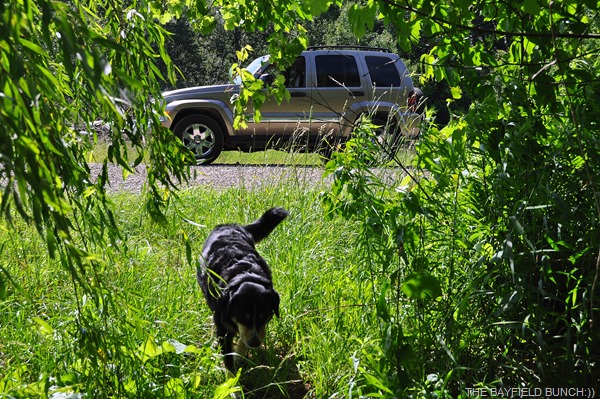 PHEEBS & I DOING A LITTLE EXPLORING ALONG THE WAY TODAY

GROANER’S CORNER:((  There were two Catholic boys, Timothy Murphy and Antonio Secola whose lives paralleled each other in amazing ways. In the same year Timothy was born in Ireland, Antonio was born in Italy.  Faithfully they attended parochial school from kindergarten through their Senior year in High School. They took their vows to enter the priesthood early in college, and upon graduation became priests. Their careers had come to amaze the world, but it was generally acknowledged that Antonio was just a cut above Timothy in all respects.  Their rise through the ranks of Bishop, Archbishop, and finally Cardinal was meteoric to say the least, and the Catholic world knew that when the present Pope died, it would be either Timothy or Antonio who would become the next Pope.  In time the Pope did die, and the College of Cardinals went to work. In less time than anyone expected, smoke rose from the chimney at the Vatican and the world waited to see whom they had chosen. The world, Catholic, Protestant and secular, was surprised to learn that Timothy Murphy had been elected Pope.  Antonio was beyond surprise; he was devastated, because, even with all Timothy's giftedness, Antonio knew he was better qualified. With gall that shocked the Cardinals, Antonio asked for a private session with them in which he candidly asked, "Why Timothy?"  After long silence one old Cardinal took pity on the bewildered Antonio and rose to reply, "We knew you were the better of the two, but we just could not bear the thought of the leader of the Roman Catholic Church being called ... Pope Secola.