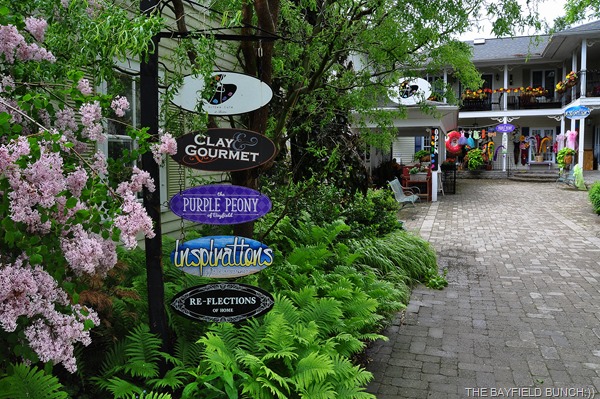 Thunder, lightning, & heavy rains came in the night bringing cool temps & blinking our power off & on.  Foliage, drooping under the weight of continuing raindrops looked extra lush & green.  I'm sure area farm folks will be happy with all this extra water for their fast growing late Spring crops.  With Mother Nature stirring up her proverbial weather pot neither Kelly or I managed a good night's sleep which in turn led to a tired day.  In my head was the childhood tune, 'rain rain go away come again another day'.  But there was a big upside to our overnight rains in that it washed all the pine pollen off the Big EEE & Jeep Liberty.  When storms again returned in late afternoon I quickly backed our pollen laden Sunfire out of the carport & it too ended up sparkly clean:)) 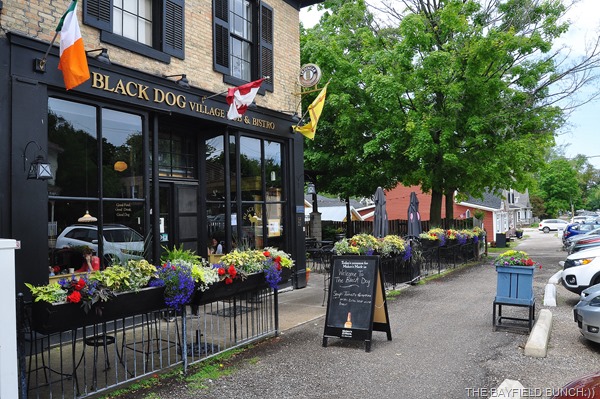 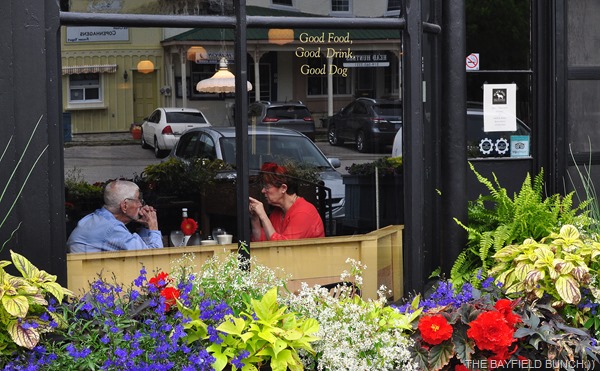 I THINK THIS LADY MIGHT BE GIVING HER HUSBAND THE DICKENS…”YES DEAR, YES DEAR”

Back in August of 2008 I had taken a bunch of photos in & around Bayfield & put together a photo album of the Village.  Been in the back of mind to do that again sometime so this morning after the rains let up I headed into town & parked on Bayfield's Heritage Main Street.  Being Monday some shops were open & some shops were closed.  Not many people on the street so it was a good time to wander around uninterrupted with a camera.  Only had one fella come out & ask me why I was taking pictures of his place.  Turns out he grew up in Stratford & the more we chatted the more people we realized we knew.  He was called back inside by a staff member & I continued on my way snapping here & snapping there.  Bayfield truly is a nice picturesque little Village atop the cliffs of Lake Huron & dates back to 1832. 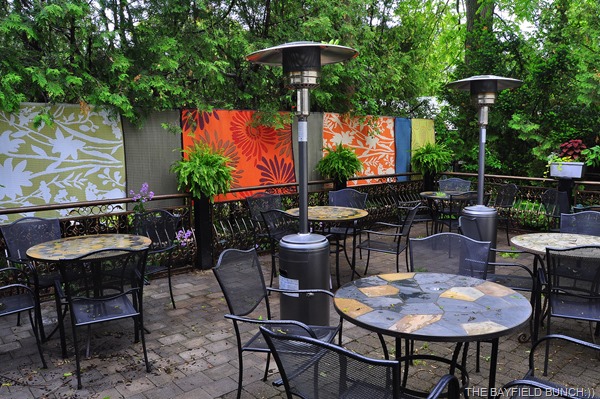 I have also started compiling photos of Bayfield homes around the Village.  On my evening drives with Pheebs I have been randomly snapping pics of houses & properties as we slowly roll by.  (It’s my kind of ‘drive-by shooting’)  Bayfield is made up of beautiful individually designed homes from old original rustic cottages to a few architectural marvels.  Close to the heart of the village nothing resembles a sprawling subdivision.  Each property is unique & with Bayfield’s abundance of century old trees home owners have blended their landscaping in to give the whole village it’s charm. 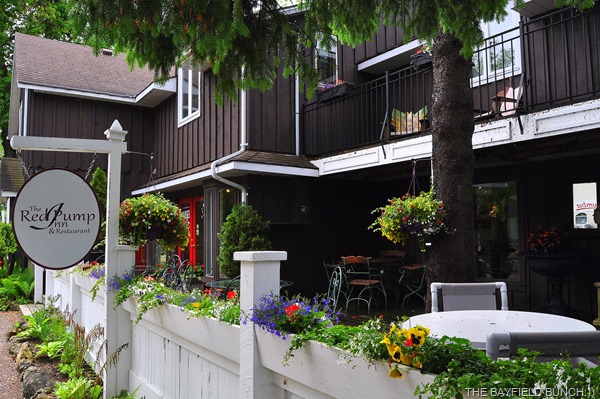 I was home a few hours later with about 175 photos to edit.  Taking & editing photos is the easy part.  Putting together a photo album is the hard part for me.  When Google stepped in with their Google+ stuff years ago & took over how my photos & photo albums were handled I lost touch with all my photo albums.  Try as I did I was not able to get a handle on Google's way of doing things & I soon found myself left far in the dust.  And I've been lost in that Google dust ever since.  I do need to come up with some sort of way to deal with my photo album problem.  I have far too many photos to include in my daily posts each day & I really need to organize my photos again into some kind an album form.  At least with albums I can include their links in my posts for anyone wanting to see additional photos on any one given subject.  Today's Bayfield photos really need to be albumized & I think it’s high time I got a handle on things.  I do have have a Flickr account as well as a Smug Mug account but I was never knocked about Flickr so maybe I should try & get my head wrapped around my Smug Mug account again.  I did like Smug Mug better than the other photo programs but their last upgrade a year or two ago confused me, my attention dwindled, & out of frustration I let my account drop.   Anyway, if I am to move ahead with some new photo ideas I definitely have to get a handle on my photo album problem.  More patience Al, more patience……………………….. 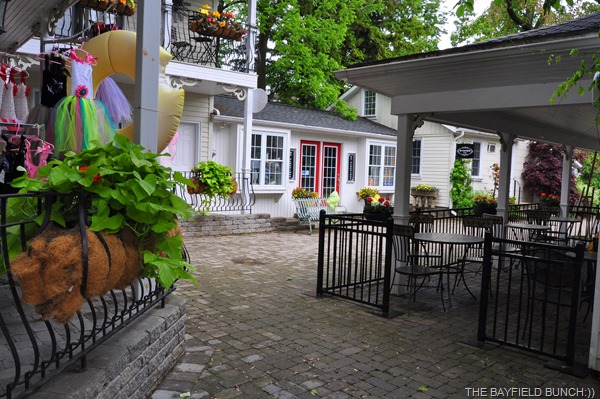 I have still been plowing through books on my Kindle but have been lax at keeping up my book reports.  As a young fella I read a lot of books about the 2 great wars & especially liked reading of those daring young men in their flying machines in particular the fighter pilots.  A few weeks ago I finished an excellent read from one of those brave young men who flew the skies over England during the Battle Of Britain.  Author & pilot Geoffrey Wellum wrote First Light.  The book is not as much about the aerial dogfights as it is about a young man’s thoughts & feelings as he struggles with his own self doubts, guilt's, & fears.  It is an honest book with as much of the story taking place on the ground as in the air.  Hard to imagine at only 19 years of age 15,000 feet in the air fighting to just survive the next few seconds while your Spitfire is being shot to pieces by another young fellow flying a German Messerschmitt right behind you.  Hard to imagine being lost over England in bad weather & fog not knowing where your air base is & fighting the panic to stay calm.  Hard to imagine the aircraft mechanical failures, the crashes, friends dying, stressful sleepless nights & always waiting, waiting, waiting never knowing if you would ever see another sunrise.  Great book & well written. 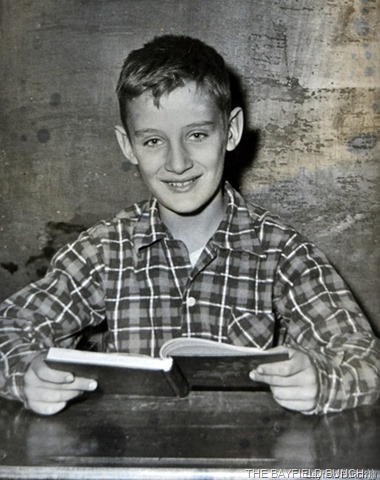 I BEGAN READING AT A YOUNG AGE, GOT AWAY FROM IT FOR A BUNCH OF YEARS BUT AM RIGHT BACK AT IT AGAIN:))

Currently I am again reading another factual book on history called Famous Sheriffs & Western Outlaws & of course am thoroughly enjoying it.  Many of the towns & areas in the South-western United States where history has taken place Kelly & I have been & even lived in for a time while boondocking, ranch sitting, or at our house.  It was in our ranch sitting days near McNeal Arizona that we got to walk the streets of Tombstone & hike the trails of Cochise & Geronimo.  Not just once but many times over the course of a few winter seasons spent in the area.  I especially liked the book section having to do with Cochise County.  Kelly & I have have found & walked the long ago Ghost Towns of Mill Bank, Charleston, Gleason, Pearce, Fairbank & a few others which have slipped my mind.  We found Johnny Ringo’s grave at the foot of the Chiricauha Mountains, walked the grounds of Fort Bowie, & stood at the grave of one of the legendary Earp brothers in a Willcox cemetery.  This whole area was once referred to as Helldorado & when one reads the history one can easily understand how it acquired that name.  Mexican & Apache raiding parties riding up the Sulphur Springs Valley & into the Dragoon, Mule, & Chiricahua Mountains.  The book tells of the lawlessness in not only Tombstone but nearby Bisbee as well.   Bisbee by the way is one of our all time favorite western towns.  Last time I was in Tombstone I walked those legendary streets with my Aunt Jean.  Yes, I’m really enjoying this book & especially so since we have traveled this whole area & now actually own a house in another one of Arizona’s wild west historical areas near Wickenburg.  Always nice reading historical things about areas we have been too…………………………………. 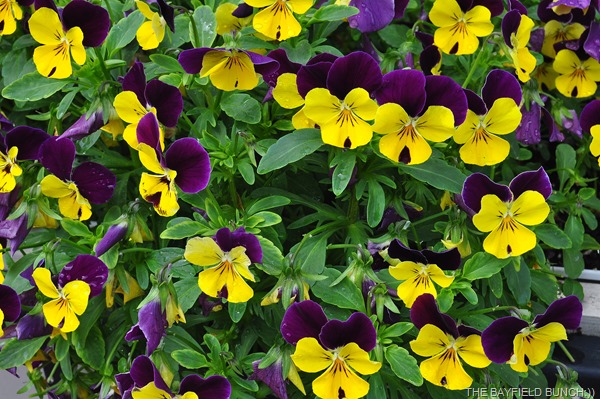 GROANER’S CORNER:((  The little boy greeted his grandmother with a hug and said, "I'm so happy to see you grandma. Now maybe daddy will do the trick he has been promising us." The grandmother was curious. "What trick is that my dear," she asked. The little boy replied, "I heard daddy tell mommy that he would climb the walls if you came to visit us again."