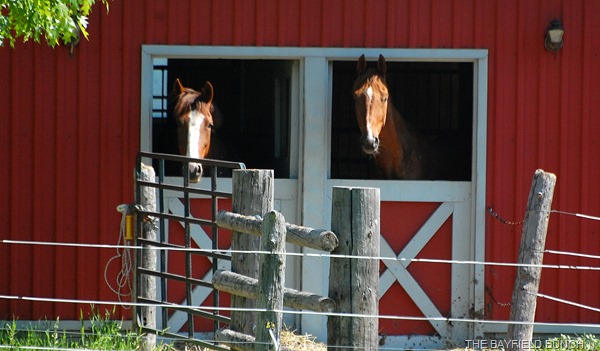 SEEN ALONG THE ROAD TODAY

How nice to turn on the computer this morning & read that Microsoft's Live Writer problem has been solved & LW is once again working.  A lot of happy smiling Live Writer faces out here today.  Don't know who or how the problem was resolved but a big 'yaaaaaaaaaaaaaaaay' to the people responsible for the fix.  Not thinking a solution to the problem would be found it is time's like this that I am happy to have been proven wrong with my prediction.

MOM & THE KIDS IN A BIG HURRY TO GET AWAY FROM AN APPROACHING JEEP LIBERATOR
With cool temperatures rising & sunlight pouring through our Park's tall pine trees I couldn't resist the urge for a good old fashioned gravel run this morning so it didn't take long for Pheebs & I too get Libby's wheels rolling.  Couldn't even remember the last time we & had been out on a back roads run.  Must have been 3 or 4 days ago at least.

LIFE IS A TWO WAY HIGHWAY IN THE MARSH 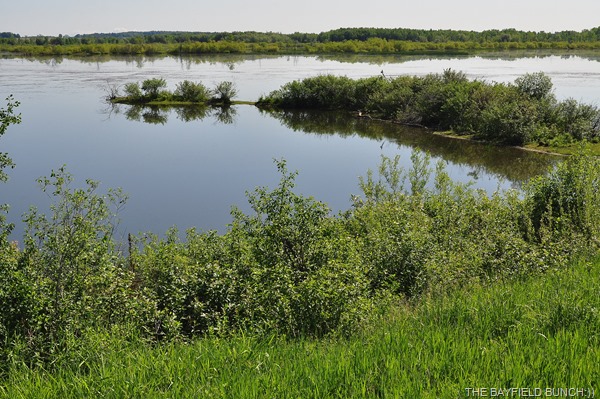 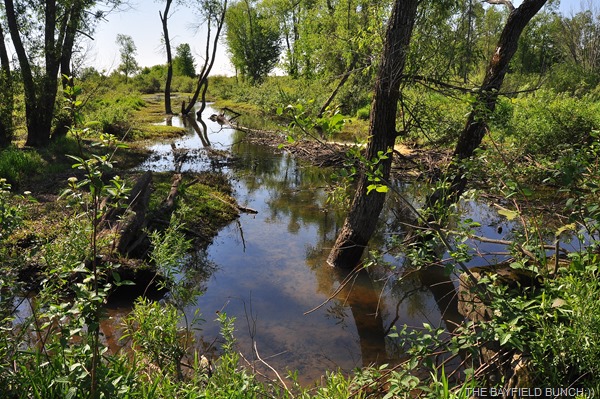 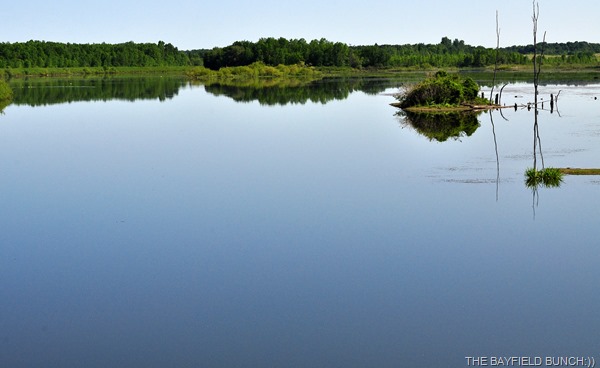 PLACID MARSH WATERS WITH NARY A RIPPLE

We didn't cover a lot of miles today.  Feeling our morning's air a tad on the cool side I figured the mosquitoes & biting flies would not be airborne until at least mid to late morning so with a coffee & carrot muffin to go from Clinton’s Tim Hortons Pheebs & I headed straightaway for the Hullett Marsh just a short 10 minutes away.  With no humidity in the air it was what I would call a perfect morning to be outside doing anything one's little heart desired.  For Pheebs & I it was a walk to an old forgotten iron bridge hidden deeply away in the marsh.  Country roads had once traversed the area of the Hullet Marsh & a couple old overhead iron bridges still remain hidden away with long ago waterways still flowing under them.  Only tranquil bird songs wafting on wisps of a quiet June morning's pristine country air. 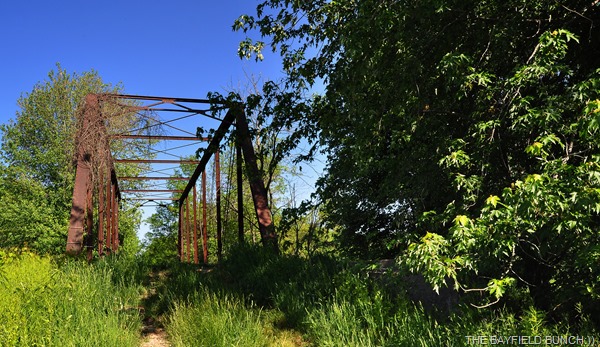 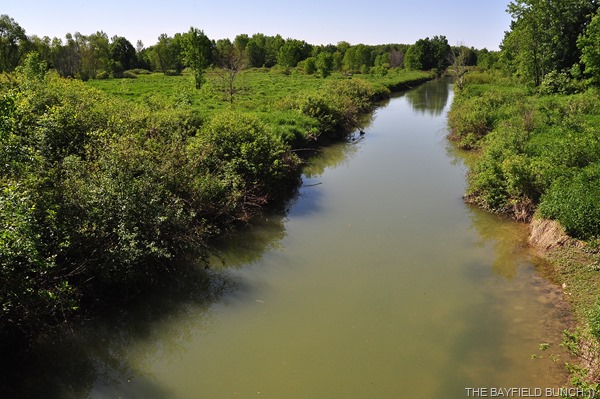 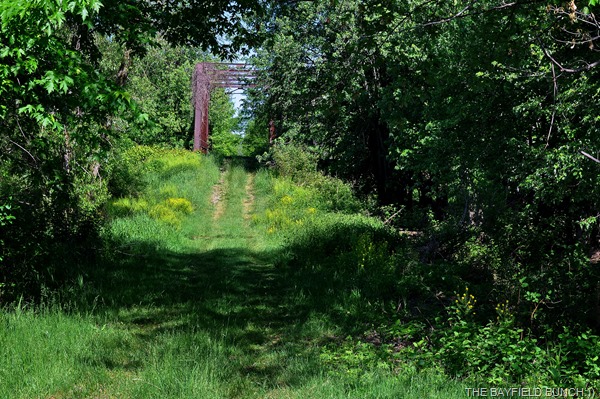 A ONE TIME BUSY COUNTRY ROAD TRAVELS THIS WAY NO MORE 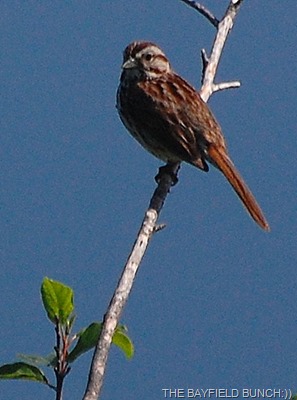 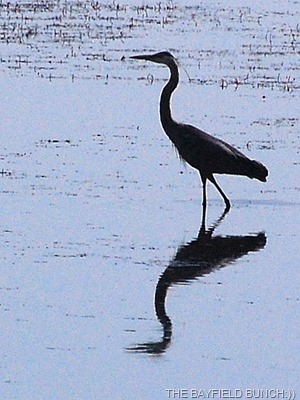 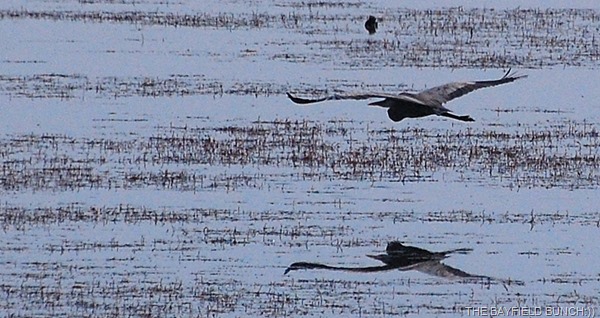 With today's sunshine charging my batteries I was able to spend some more time cleaning the outside of our Motorhome.  Using a product called Mirage 2000 which I had picked up at Bayfield's Stormrunner RV Sales & Service last summer I was able to remove a lot of water spotting from the rig's last wash job a few weeks ago.  It also removed some black streaking as well as leaving behind a nice shine.  Cleaned all the outside glass too.  Kelly busied herself with a bunch of interior cleaning so the rig is just about ready to go somewhere & get dirty all over again just so we can spend more hours cleaning it once more.  Seems to be a never ending carousel of cleaning with these big mobile Dinosaur Monsters. 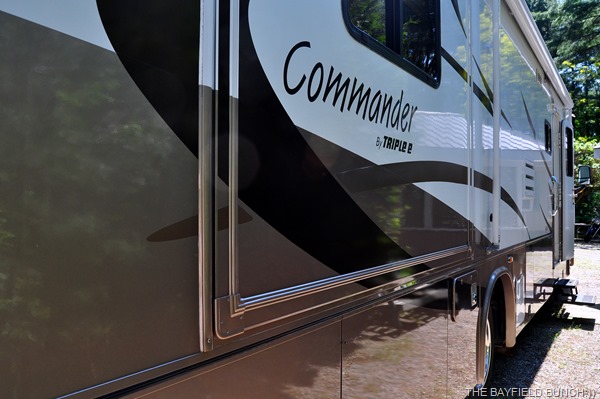 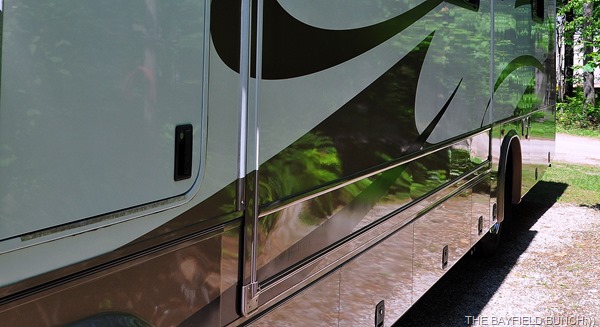 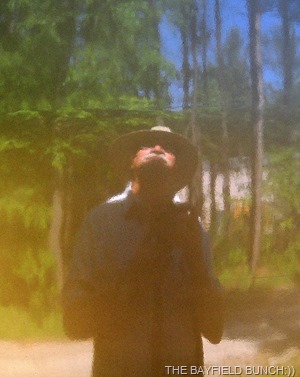 Last year a man was purposely shot dead by another man somewhere in the Hullett Marsh & this morning I was surprised to stumble on a what appeared to be a recently erected wooden cross with a plaque on it.  I don't know if the case has gone to trial yet but it would be interesting to see what the motive for murder was.  The shooter, an acquaintance of the victim has been in custody since shortly after the shooting last September.  Hullett Marsh Shooting September 2014.  The cross stands near a parking area where the group of avid horse riders & dog trainers had embarked on a day’s ride before one of them was shot. 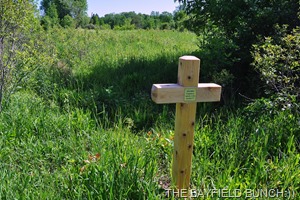 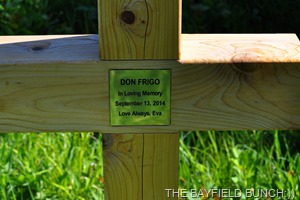 My post tonight is once again coming to you from my Live Writer writing platform & I'm so happy I can size & place photos more creatively again.  I will miss Blogger's faster publishing speed of course but it is the way it is.  I'm thankful to Blogger for being there when Live Writer went down & it's nice knowing Blogger will still be there as a back up if Live Writer hits another roadblock sometime in the future.  Again, good stuff & a big 2 thumbs up for the Google/Microsoft techie folks who readily resolved this dilemma for so many of us loyal Live Writer fans out here.  You know maybe there is a shred of hope left for humanity after all……………………….:))

In my Monday post I spoke about the passing of a fellow RV Blogger named Wayne Scott.  Wayne’s wife has written an informative, personal, & heart warming tribute to her dear husband & you can read her fine tribute here at Bon Voyage, Captain. 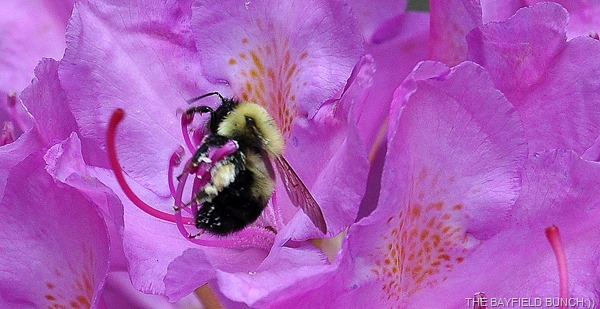 GROANER'S CORNER:(( There was a man driving down the road behind an 18 wheeler, at every stoplight the trucker would get out of the cab, run back and bang on the trailer door. After seeing this at several intersections in a row the motorist followed him until he pulled into a parking lot.  When they both had come to a stop the truck driver once again jumped out and started banging on the trailer door. The motorist went up to him and said, "I don't mean to be nosey but why do you keep banging on that door?"  To which the trucker replied, "Sorry, can't talk now, I have 20 tons of canaries and a 10 ton load limit, I have to keep half of them in the air at all times!!"