'WOW' couldn't believe how much & how fast our temperatures dropped Saturday night.  I was right back into a warm T-Shirt with a long sleeve flannel shirt & jacket again this morning.  Nicer for doing yard though.  No hot sweaty stuff. 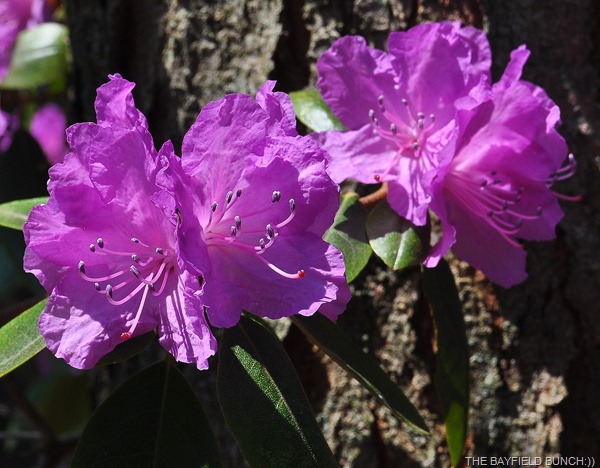 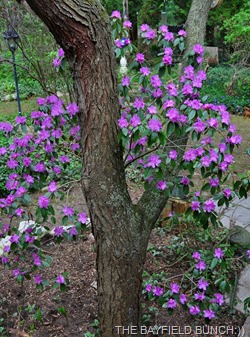 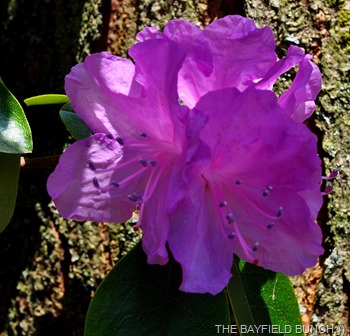 ONE OF OUR FRONT YARD AZALEA PLANTS IS IN BLOOM…WELL I THINK IT’S AN AZALEA
Kelly was off early to Cambridge Ontario for Mother's Day so Pheebs & I were in charge of holding down the Fort.  Of course not wanting to hang around the Fort all day we hitched Libby up & off we headed for Goderich.  Figured since I had just washed the Jeep Saturday we'd stay off any dusty roads today & we did just that. 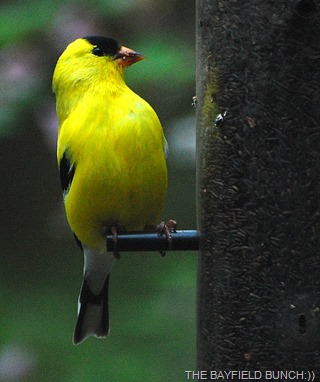 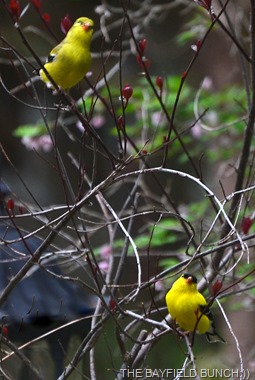 OH HOW WE LIKE ALL OUR FRONT YARD GOLDFINCHES 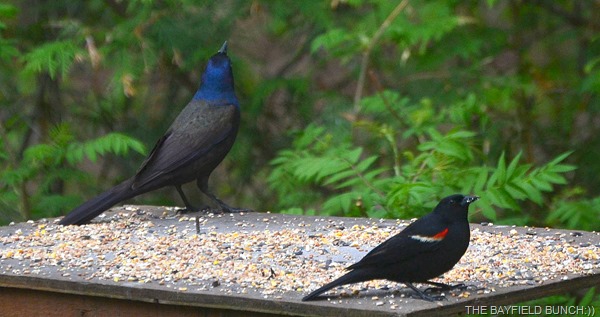 MAYBE NOT THE BEST OF FRIENDS TODAY THESE TWO
Coffee & carrot muffin at McD's & we headed on down to the Goderich harbour.  Spotted 2 large Lake Freighters a few miles offshore with their bows pointed towards the harbor mouth.  One appeared to be anchored while the other one appeared to be on a steady inbound course for the harbor mouth.  Took Pheebs for a quick walk at the dog walking area before heading over to the outer harbor area near the large Sifto Salt Mine complex.  Figured the inbound freighter was probably coming in for a load of salt.  Pheebs stayed in the Liberty while I walked all the way out to the end of the south pier to watch the first freighter come in.

SPOTTED A LARGE MOTIONLESS GREAT LAKES FREIGHTER IN THE MIST

A SECOND FREIGHTER INBOUND FOR THE GODERICH HARBOR
I had always assumed these large ships came all the way into the inner harbor bow first whereupon a tugboat probably got them swung around & lined up with the north pier beside the salt mine's loading facility.  Imagine my surprise to see this large lake freighter slow then begin to turn sideways to the harbor entrance.  It was in fact swinging around to begin backing itself in through the outer harbor using it's main propeller in reverse & bow thrusters to keep it steady.  It eventually cozied itself up to the pier beside the salt mine's loading dock.  Met a knowledgeable chap on the pier who told me backing in without tug boats is a normal procedure as long as there is no wind & the waters are calm.  It is on windy days the ships come in bow first & then are swung around using tugboats in either the outer or inner harbor & manoeuvred into place.  He told me this particular ship had a new Captain at the helm & this was his first time backing into the harbor.  Said usually they are backed in much faster.  Maybe the new Captain was being very cautious because he only had a beginner's back up license:))

THE SHIP HAS NOW SWUNG ROUND & IS BACK UP 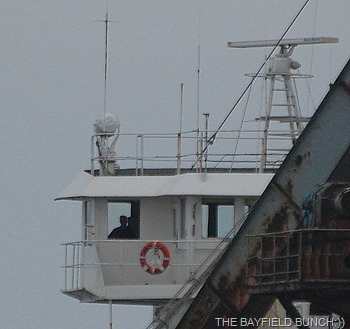 I think the fellows name I talked to on the pier today was Don & having several Sons following the marine way of life he was very much into the know about ships, their locations, their histories, & their crews.  Don, a photo buff himself hosts SunSets an ongoing photo collage of Goderich sunsets taken by area people.  He encouraged me to send in some of my sunset pics & I just might take him up on that offer. 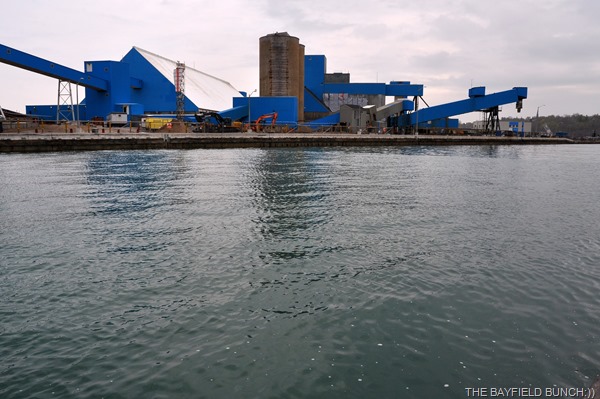 ON THE RIGHT IS THE LOADING SHUTE AT THE SIFTO SALT MINE & THAT IS WHERE SHIPS TIE UP ALONGSIDE & ARE LOADED WITH TONS OF SALT
After the ship was docked & enveloped by a cold damp overcast day Pheebs & I decided to just head on back home & get a few things done around the house.  It seems the more I look around the more I am seeing things which need to be done.  In fact both Kelly & I are beginning to feel a little overwhelmed.  Guess it's better to be a tad overwhelmed than a whole bunch underwhelmed.  Well at least for me anyway.  Keeps my sometimes too analytical mind from being so dam analytical!!

I was kinda slumped in my recliner looking out at the cold gray day when a solar flair obviously occurred on the Sun sending a shaft of sunlight speeding to earth whereupon it beamed right down through the pine trees into our living room, bounced off the floor & struck me full in my battery compartment.  I was instantly energized & within minutes was atop a step ladder outside in the glorious sunshine cleaning long overdue house windows.  Temperatures rapidly ramped up & I was quickly into a short sleeve shirt again.  Oh how I like when things happen like that.  I rode that energy wave for 2 solid hours completing two thirds of our windows both inside & out. 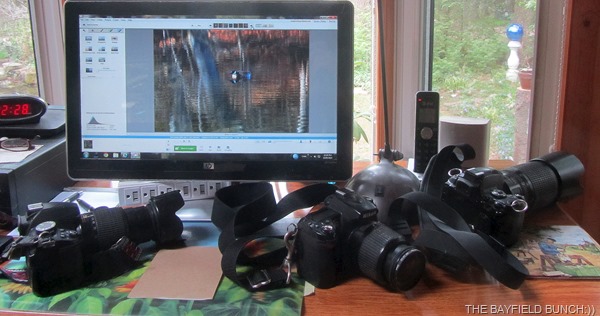 IT SEEMS THE MORE CAMERAS I USE THE THE MORE CONFUSED I GET:((

Kelly rolled in sometime around 4 loaded down with Mother's Day flowers & cards.  Said she had a good a day but is always happy to return home to our quieter way of life here in the pine forest.  Pheebs & I are always mighty happy to have her home as well:)) 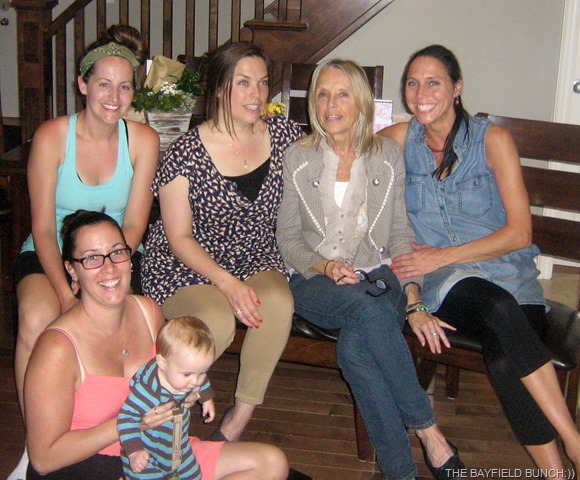 HERE KELLY IS FLANKED BY HER 2 DAUGHTERS REBECCA & SABRA PLUS 2 DAUGHTER-IN-LAWS, BREE & KIM…ALL MOTHERS:))… NOT PRESENT WAS KELLY’S OTHER DAUGHTER SARAH IN VANCOUVER B.C. WHO BY THE WAY IS ALSO A MOTHER 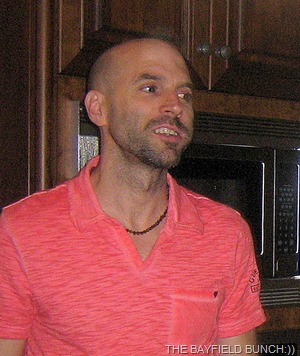 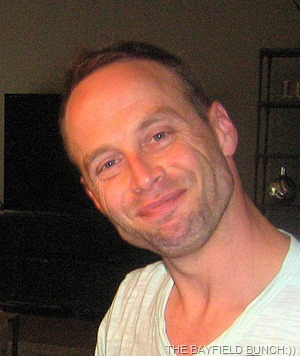 As I type this tonight I am again back in my T-Shirt & long sleeve flannel shirt as our temperatures have again dropped.  We certainly have been on a wild roller coaster ride with fluctuating temps these past couple days.  Looks like rain for the next couple days.  In fact it just started raining now……Nuts!! 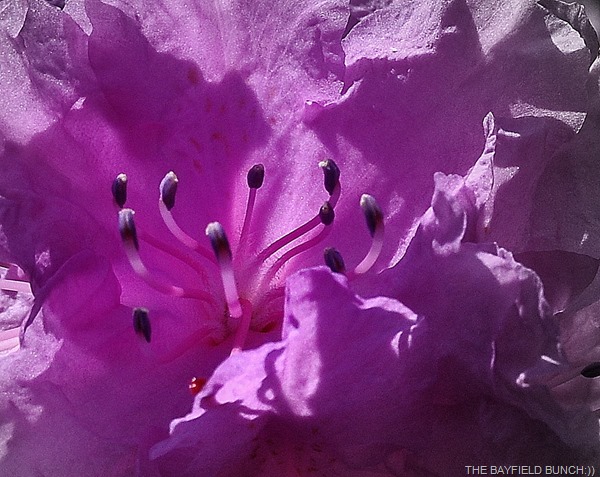 GROANER'S CORNER:(( Two mothers are having a conversation about their children one day.
"How do you get your son up so early on school mornings?" asks the first woman.  "Oh, that's easy," replies the second. "I just throw the cat on his bed."  "Why does that wake him up?"  "He sleeps with the dog!"