From my comfy recliner I have a clear view of our surrounding pine trees to the southeast & it's always nice to see sunlight tickling the tops of our pines first thing in the morning.  Our Monday night storm didn't amount to anything more than dark skies, a bit of wind in the tree tops & a smattering of light rain for about 5 minutes.  Judging from our computer weather map I'd say the storm veered inland to the east just missing us.  However it did leave us all shivering in colder mid 40 temperatures today & same for tomorrow:(( 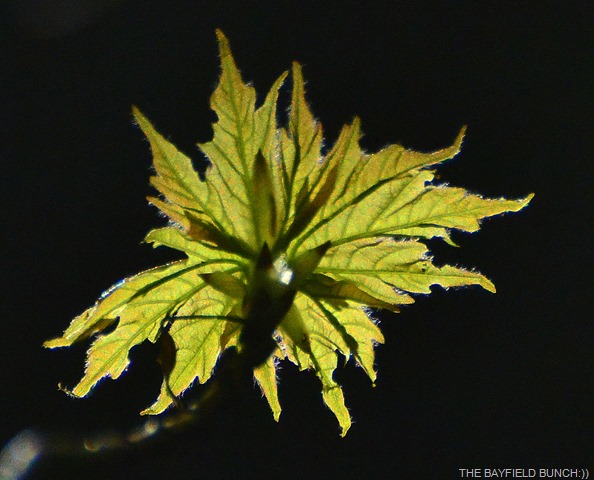 ENCOURAGING SIGNS OF SPRING
Thanks to Blogland’s lady of birds JUDY for correcting my guess about Goldfinches in my Monday night post.  The photo I included are actually Pine Siskins & I think it is the first time I have ever seen them in our yard.  They certainly have taken control of our Niger seed feeder & there are a lot of them.  I don't think I would be exaggerating if I said there are probably 40 or 50 of them out there.  It's an absolute mob scene around the feeder as they try to knock each other off to get onto a feeding perch.  And I've noticed they don't seem to come in one's or two's but do seem to come in flocks. 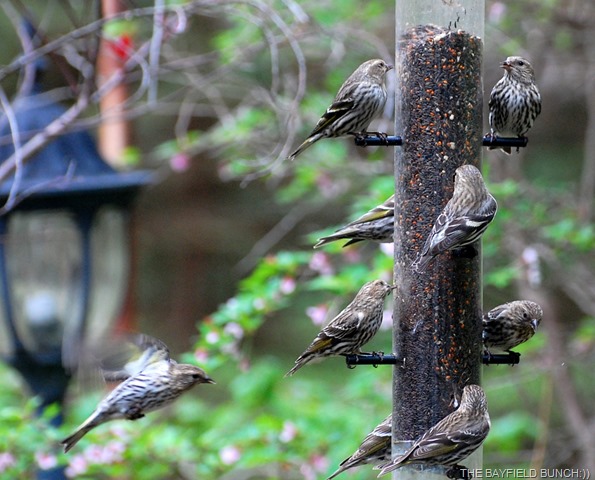 My project today on what eventually turned out to be a cold cloudy morning was to paint the inside of the kitchen cupboard where our micro-wave is now sitting.  Paint I bought a couple days ago was too thin so I was not a happy Camper with paint dripping here & running there & not covering worth a snoot.  Despite my impatience with this sort of thing I did manage to persevere & complete the project.  Painting is one of those things I figure a person has to be in the right kind of mood to do.  And of course my project was not without another memory failure.  Wasn't until I had completed the job that I suddenly remembered we already had some paint sitting in a closet above our water heater.  I had previously checked an outside shed where I normally keep paint before buying a new can but had found nothing.  Checked the paint above the water heater & sure enough there were two cans of white primer with one can never opened.  It's no wonder I get upset with myself!! 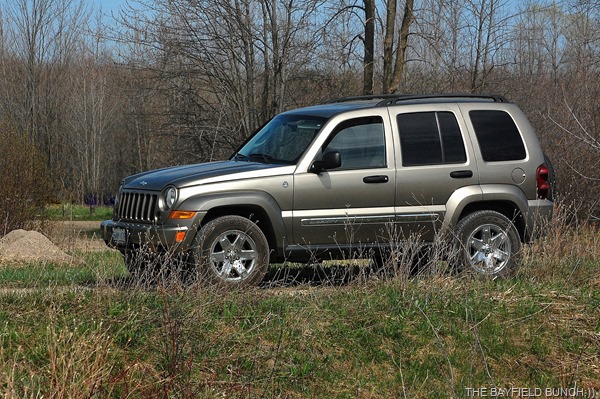 There are countless numbers of interesting blogs out here on the web & one could easily spend their days just reading & reading.   Sometimes I skim down my sidebar looking at blog titles & when one jumps out at me I'll stop & have a look.  Such was the case this morning when I saw Barney from Old Fat Man's Adventures title which read, An Important Announcement.  In his short post Barney had a link to another Blogger's post which in turn was titled, My Last Post.  I clicked on that & it turned out to be Wandrin Lloyd's Blog.  The name Wandrin Lloyd rang a bell & I finally remembered he was the fellow Mark from Box Canyon Blog had talked about awhile back.  Wandrin Lloyd spent some time hiking the majestic mountains around Ouray Colorado with Mark & Bobbie recently I think.  Although I have not met Wandrin Lloyd & have not followed his blog I am truly saddened to read what has happened & what is happening to him.  I wanted to leave a comment on his post today but I just didn’t know what to say………………………

GROANER'S CORNER:(( My husband, a forester, often has to consult property owners to determine boundary lines. Walking up a dirt road to question one such individual, he encountered signs that read: "No Trespassing," "Beware of Dog," and "Keep Out...This Means You!" Finally arriving at the door, he talked with the congenial, cooperative landowner. When my husband was ready to leave, the man said to him, "Come and see me again sometime. I don't get many visitors up this way."

Little Harold was practicing the violin in the living room while his father was trying to read in the den. The family dog was lying in the den, and as the screeching sounds of little Harold's violin reached his ears, he began to howl loudly.  The father listened to the dog and the violin as long as he could. Then he jumped up, slammed his paper to the floor and yelled above the noise, "For Pete's sake, can't you play something the dog doesn't know?!"