UNDECIDED ANTICIPATION, BITTER DISAPPOINTMENT, AND THEN…………. 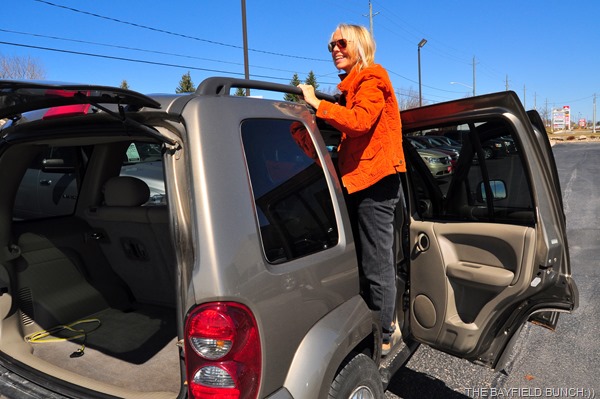 Bright sunny cool morning just made for a totally excellent drive to Elmira this morning.  The heart of Mennonite country north of Kitchener/Waterloo Ontario.  Had been many years since I/we had traveled any roads up that way but the countryside looked the same as we remembered it.  Lots of farmland with horse & buggy tracks along the shoulders of the roads.  Took us the best part of a couple hours to get there as we cruised through half a dozen car lots in Listowel Ontario.  Our mission in Elmira this morning was to lay some hands on a 2007 Jeep Liberty, take it for a drive, & see what we thought. 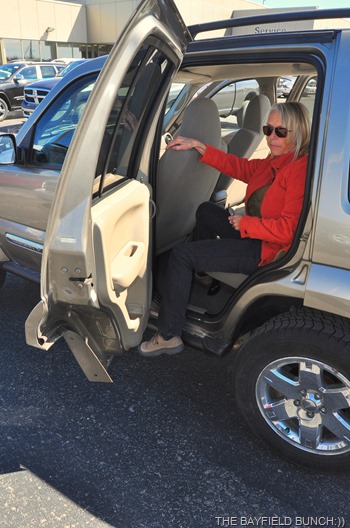 BACK SEAT IS EASILY ACCESSIBLE WITH REAR DOORS >>>

We found the car in immaculate condition looking like the day it rolled off the assembly line.  No signs of wear or tear anywhere. This Liberty was bought new at Voisin Chrysler Elmira by a lady working in Waterloo as a legal secretary.  The Jeep spent it’s night’s in this family’s 2 car garage & day’s in an underground parking lot in Waterloo so it has been mainly protected from the environment over the years.  This Liberty was also serviced at Voisin Motors over the years so it’s entire history is on file there.  Only 48,000 miles on it.  We took it for a drive paying particular attention to roominess & found the front compartment fine.  My legs have always been to short for the rest of me so I found the driver’s area works for me.  And lots of room between the top of my hat & the roof.  We took turns driving it with each of us trying out the back seats which were fine as well & lots of room behind the back seat.  Big enough for groceries & Pheebs at the same time.  We did take a liking to the car but were not prepared to make a commitment until we had looked at the 04 Jeep Cherokee in Cambridge.  We liked the salesman we talked to who has been with Voisin Motors a long time.  Voisin Motors has been in Elmira for over 50 years & is lady owned.  Ray Frederick was not pushy with us & thankfully laid back & not at all phonely sappy like some characters I’ve met over the years.   We did work out a reasonable price just in case we decided on it but without a deposit the Jeep could not be held for us.  Decided not to make a decision or deposit until we had thought about it more & in a nail biter of a finish later this afternoon that non-decision & non deposit came back to bite us & bite us hard. 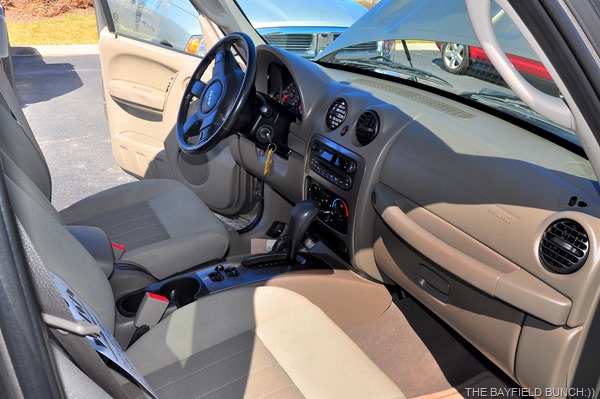 From Elmira Ontario later this morning we made our way down into & through Waterloo & Kitchener.  Had been many years since we had traveled this neck of the woods & it was a trip down memory lane.  I lived in Kitchener back in the late 60’s & early 70’s & new the whole area like the back of my hand.  A lot has changed over 40 years but I still have a slight sense of home there.  Many great memories & a whole boat load of bad ones.  Our travels on Kitchener’s expressway lead us out to Canada’s notorious 401 where the memories really came flooding back.  This had been my work area back in the late 80’s & all of the 90’s.  Many endless heavy traffic miles back & forth in all kinds of nasty weather between Goderich, Stratford, Kitchener, & Toronto.  Hadn’t driven this stretch of highway since August of 2000 but felt right at home in the 6 lane traffic again & just wanted to strap on my Airports van & hustle people off to the airport.   But of course I’m getting myself way off track again here. 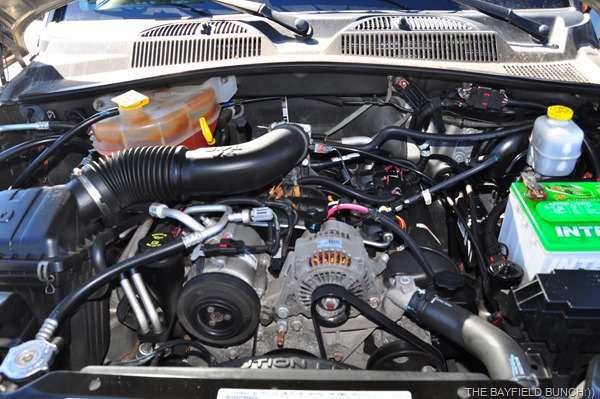 Rolled off the 401 heading into Cambridge on the heavy trafficked number 24 highway slipping through a couple car dealerships along the way.  This whole stretch of 6 lane highway & busy like nuts traffic brought back a ton of memories for Kelly & I.  We worked together in this heavily congested mayhem back in 93/94 delivering mobile signs to various business’s.  When I met Kelly she was managing a sign company in Cambridge & it wasn’t long & I was working for her by day & driving my Airports van out of Stratford Ontario at night.  That’s when I had my motorcycle accident while hurriedly traveling between jobs & towns.  But I digress………………. 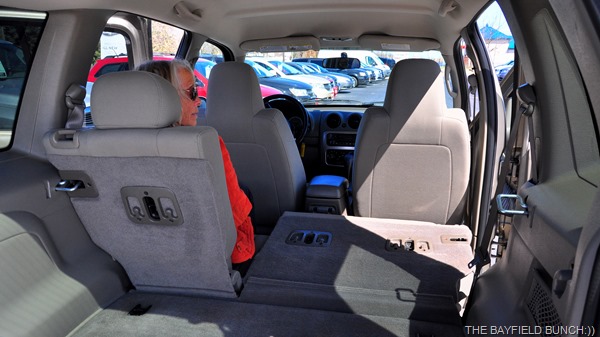 We found the car dealership where the 2004 Grand Cherokee was parked & wheeled in for a looky see.  Right away soon as I saw it I knew it was too heavy for our gas Motorhome.  Had we had a diesel, no problem.  Nice looking Cherokee with leather seats & oh were those seats ever comfortable.  Super sound system, sun roof plus all the bells & whistles.  But it was showing it’s age & we both new it was not the vehicle for us.   Not that it wasn’t nice because it was.  Maybe just a tad too big & cushy for the type off roading we like to do.  We didn’t take it for a test drive because I just knew it was too heavy for the Big EEE. 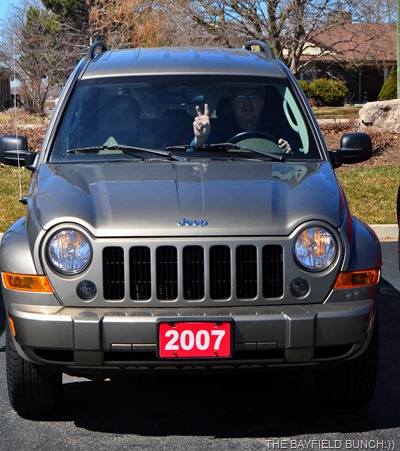 <<< RAY BACKS THE LIBERTY INTO IT’S SPACE & FLASHES US THE ‘V’ FOR VICTORY SIGN THIS MORNING & HEY THIS LIBERTY STILL HAS THE DISTINCTIVE STYLING OF A REAL JEEP:))

We rolled out of the southwest corner of Cambridge reminiscing about all the old familiar spots along the way.  Kelly was especially familiar with Cambridge having lived there for many years before I met her.  Our conversation heading home soon centered back on the Jeep Liberty we had seen in Elmira earlier.  The Liberty had a chip in the windshield so the windshield was going to be replaced & it was slated for new front brakes.  Back & forth we went trying to make a decision.  Price was right because we had verbally agreed on $1,000 under the asking price.  The Liberty weighed in only a few hundred pounds more than our Wrangler so the weight was totally acceptable.  Basically the same type transfer case as our Wrangler as well.  No push buttons & I liked that.  The more we thought & talked about it the more we agreed it was the right deal & the right vehicle for us but we were dragging our feet on a final decision.  We were just about 5 miles south of Stratford heading north when an oncoming vehicle looked familiar to us & we recognized the unmistakable grill of another Jeep Liberty & as it passed we noticed it was a tan color just like the Elmira Liberty.  We took that passing Liberty as a good sign & ‘presto’ the decision was made right there & then.  Kelly said maybe she should call Ray in Elmira & let him know we had decided to take the 07 Liberty.  And that’s when the bottom fell right out of the Elmira Jeep Liberty deal:((

I immediately heard the disappointment in Kelly’s voice when Ray on the other end of the phone told her another salesman was at that very moment in his office talking to another couple who had just had that same Liberty out for a drive.  We knew right then & there we had just missed out on a great opportunity for an exceptionally well maintained vehicle in superb condition with low mileage.  For sure this other couple would grab it.  If only we hadn’t been so indecisive.  Our hearts just sank right out through the bottom of our shoes & the disappointment & discouragement we felt was huge. 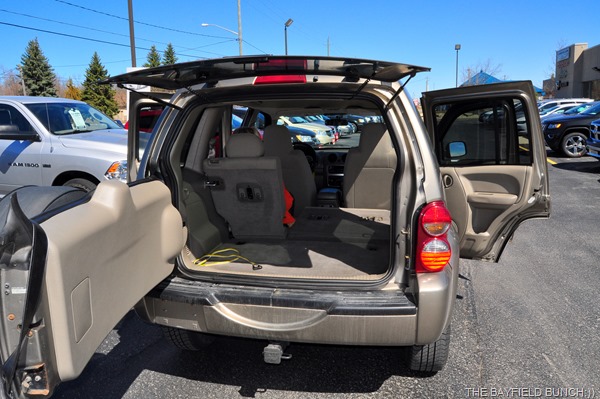 We rolled on into Stratford to grab ourselves a bite to eat at McDonalds although both of us had pretty much lost our appetites.  Heading in Erie Street we saw Strickland’s Auto Sales which we were both familiar with.  This is one huge auto sales place & probably the largest one in the whole area.  Although we didn’t feel like pulling in we knew we would have to begin our search all over again & we might as well start here & at least take a drive through  & see what they had.  Spotted an 05 Jeep Liberty but I was too discouraged to even get out & look at it.  We did stop though & Kelly walked over & said she would go ask a salesman about the price.  I did finally get out & walk over to the brown Liberty but it was nowhere in the condition the 07 Elmira Jeep was.  Not even close.  Kelly did come back with a key & when I checked the mileage it had about 263 million miles on it & it was just downright grubby.  Walking back to our Jeep Kelly’s phone rang……………………. 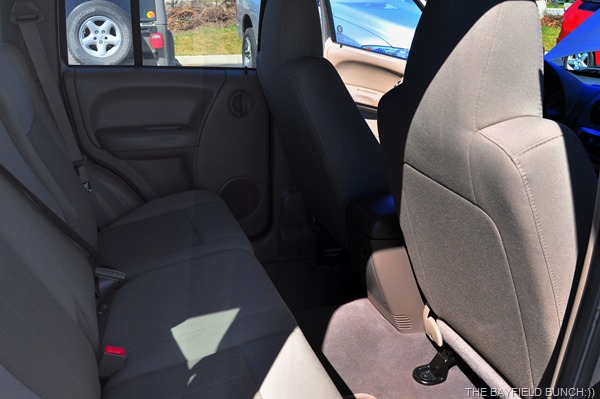 BACKSEAT COFFEE CUP HOLDERS ARE IN THE BOTTOM OF THE DOORS

With Ray’s words on the other end of the phone saying to Kelly, “it’s a funny long story Kelly but the car is yours.” Big Cheshire grins instantly spread across our faces & our Spirits immediately soared through the roof.  We had just gone from a decision making high to a brutally crushing low & then right back into the Stratosphere in less than 15 minutes.  We both agreed our legs felt shaky.  Until we talk to Ray next week about the ‘funny long story’ we can only assume the other couple decided to not buy the Liberty or Ray pulled a few strings with the other salesman or something.  Anyway to make this already long post short let me just say our long vehicle search is finally over & we will return to Elmira next Wednesday morning to bring Libby the Liberty home. 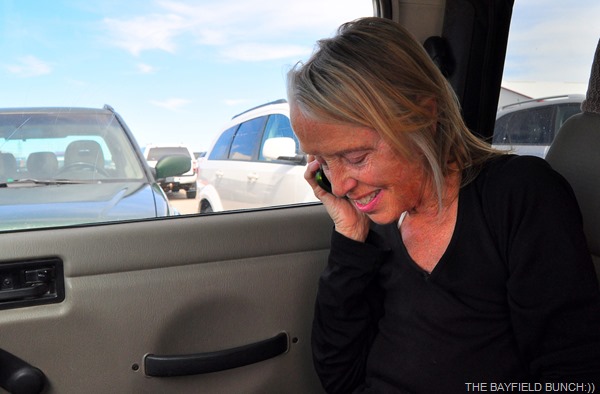 Now I know there will be readers who will disagree with our vehicle choice today but whether it be right or wrong, good or bad, upside down or downside up it’s our decision & we shall see if this Jeep Liberty turns out to be the best vehicle of ever or a problematic child.  I’m going to bed now……………..zzzzzzzzzzzzzzzzzzzzzzzzzzzzzzzzz:)) 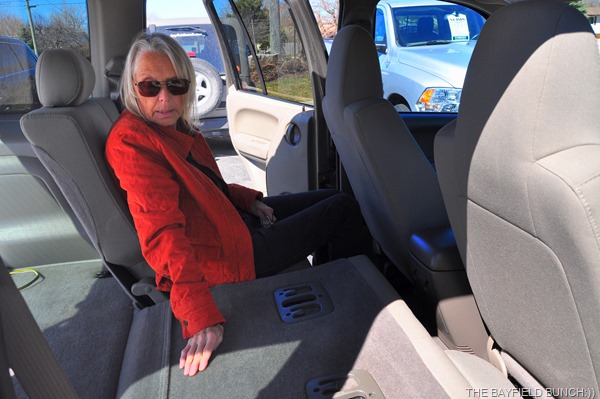 YEP, I THINK THIS MID SIZE JEEP IS GOING TO WORK OUT JUST FINE FOR US

GROANER’S CORNER:((  My aunt's neighbor in New York had a beautiful black cat, Felix, who spent his days outside and came indoors at night. One cool October evening, he disappeared. The neighbor searched for him in vain. The following spring, however, Felix reappeared, looking healthy and clean. She figured he'd been sowing his wild oats. Everything was back to normal until that autumn, when Felix disappeared again.
The next spring, he returned. Perplexed, my aunt's friend began asking neighbors for clues. Finally, she rang the bell of an older couple. "A black cat?" the woman said. "Oh, yes. My husband and I hated to see him out in the cold, so we bought a cat carrier. We take him to Florida every winter."