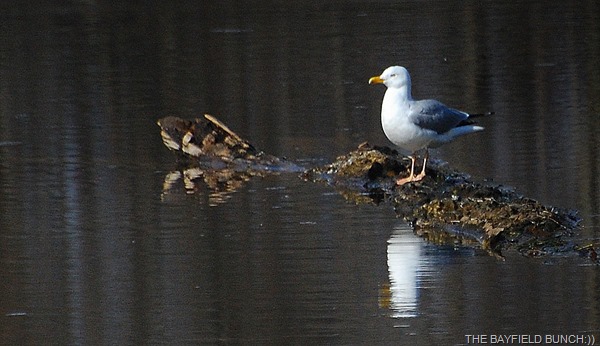 Needing to take a break & shake up my daily yard clean-up routine Pheebs & I headed out this morning for a wee Jeep ride.  Split a Burrito & carrot muffin at McDonalds, grabbed a coffee, threw a bit of gas in Jeepers & headed out into the countryside to see what we could see. 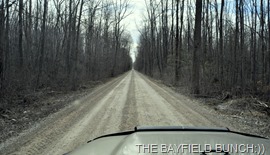 IN ANOTHER MONTH THESE FERTILE LANDS WILL BE LOOKING MUCH GREENER
With no leaves on the trees & no greening crops in the fields our landscape is still looking a little on the bleak side.  Still nice to be outside on the country roads for a drive though.  With a gathering cloud cover & threats of rain we were home by noon. (we never did get any rain)

“LOOKS LIKE A SCREW NAIL STICKING UP HERE ELLIE”…”YA THERE’S ONE OVER HERE TOO JIM”
Tempted to put the battery in the motorcycle but I know it's still too early in the season.  Every year I always install the battery in April then have to keep re-charging it because it's too cold to comfortably ride the bike until sometime usually in May & the battery ends up losing it's charge.   I have no interest in riding in anything less than perfect weather anymore.  In fact I think if someone came along & offered me a fair price for my 2002 Honda Shadow Aero 1100 I would consider very seriously selling it.  Think I only put on about 500 miles last year.  Okay so maybe I wouldn’t……………………….. 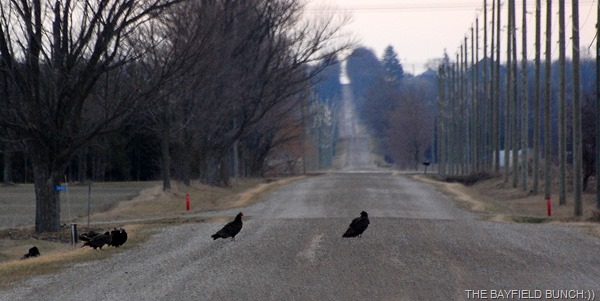 SPOTTED WHAT APPEARED TO BE A BUZZARD CONVENTION UP AHEAD

SURE MUST HAVE BEEN SOMETHING TASTY DOWN IN THAT DITCH
Our Jeep Wrangler goes into the garage next week for it's pre-safety inspection prior to selling it.  Going to be tough to see little Jeepers go but it is time for us to move on.  Had a lot of fun Jeeping memories with her & she has sure served us well since June of 2010.  Some readers have suggested maybe keeping our Wrangler & leaving it in Congress but the sale of Jeepers will pay for our newer Jeep Liberty plus we've only ever needed 1 car in Congress anyway.  And having to pay insurance & maintenance on 3 vehicles is simply not cost effective either.   Well 4 vehicles if you include the Motorhome & 5 with the motorcycle thrown in.  Ya, I think it’s time to shed some wheels.

WELL I JUST HAD TO THROW THIS REFLECTED ‘SELFIE’ IN:)) 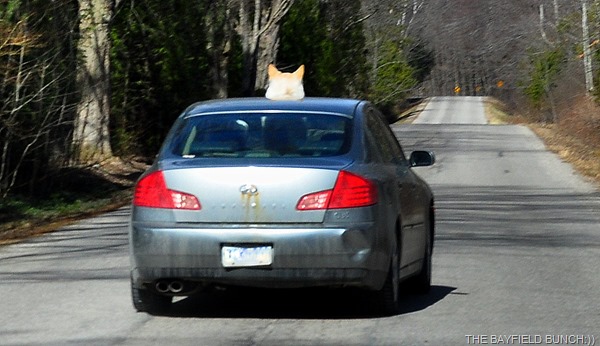 Spent a few relaxing hours in my recliner this afternoon with waves of favored ambient music from the 'Chill Lounge' washing over & lifting me through various stages of dream filled unconsciousness.  In other words a welcome state of doze.  Of course some may argue I am in a permanent state of doze.  Well they may be right of course & who am I to argue. 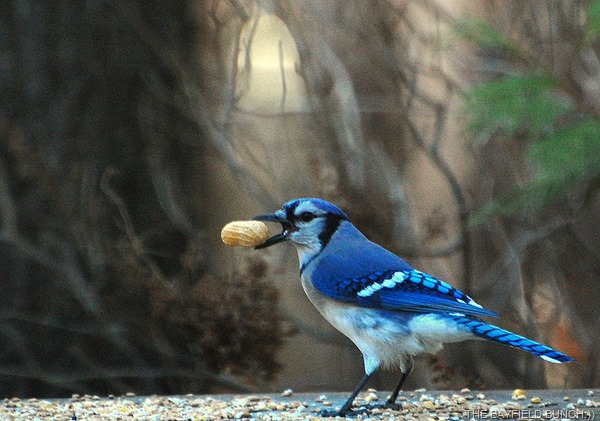 THIS IS ONE OF OUR PEANUT BILL BLUE JAYS
In the morning we will be off to London's University Hospital where Kelly has an appointment with her Doctor specialist to go over the results of her blood tests last week.  This appointment was set up last Fall.  We'll take our Pontiac Sunfire since it needs a good run after sitting in the carport all winter.  And me, well the Maitland Medical Center phoned a couple days ago with an appointment for me to see my Nurse Practitioner next Tuesday.  Seems she wants to talk to me about my high cholesterol levels again.  Oh Dear:(( 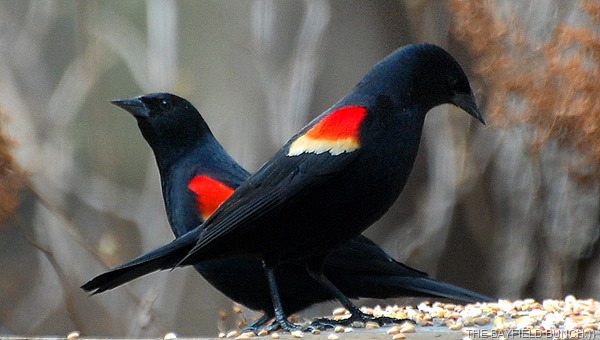 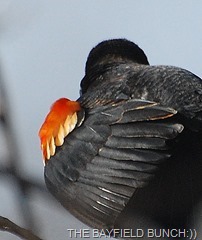 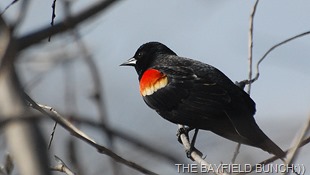 EASY TO SEE WHY THEY ARE CALLED RED WING BLACKBIRDS 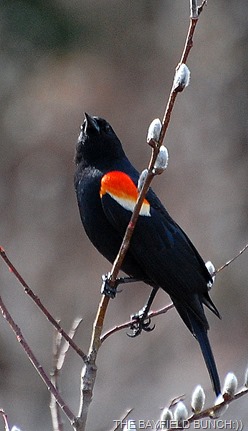 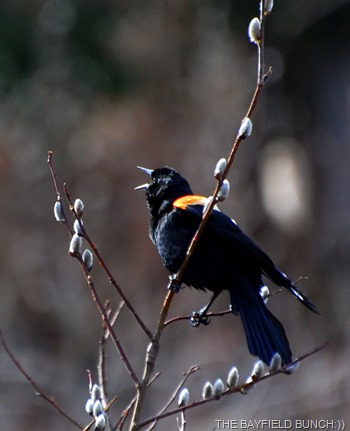 “DON’T GIVE ME NO SASS OVER THERE BILLY”

“HEY I LIKE THAT FANCY TWO STEP YOUR DOING OVER THERE”

Do you know those darned Arizona cactus stickers are still sticking me even though it's been nearly a month since we left Congress.  Once those prickly cactus barbs get into one's clothes they can hide out a long time despite many trips to the wash machine.  And they seem to like my socks & my work gloves most.  Can't see the darned little buggars but they sure make their presence known whenever they want to dig into some unsuspecting skin.  Sometimes I have to stop & turn a sock inside out just to stop the irritating barb from driving me bonkers. GROANER’S CORNER:(( Why Did The Chicken Cross The Road: Part 1

Plato: For the greater good.

Karl Marx: It was an historical inevitability.

Thomas de Torquemada: Give me ten minutes with the chicken and I'll find out.

Timothy Leary: Because that's the only kind of trip the Establishment would let it take.

Nietzsche: Because if you gaze too long across the Road, the Road gazes also across you.

Carl Jung: The confluence of events in the cultural gestalt necessitated that individual chickens cross roads at this historical juncture, and therefore synchronicitously brought such occurrences into being.

Jean-Paul Sartre: In order to act in good faith and be true to itself, the chicken found it necessary to cross the road.

Ludwig Wittgenstein: The possibility of "crossing" was encoded into the objects "chicken" and "road," and circumstances came into being which caused the actualization of this potential occurrence.

Aristotle: To actualize its potential.

Buddha: If you ask this question, you deny your own chicken-nature.

Darwin: It was the logical next step after coming down from the trees.

Emily Dickinson: Because it could not stop for death.

Ralph Waldo Emerson: It didn't cross the road; it transcended it.

Ernest Hemingway: To die. In the rain.

Saddam Hussein: This was an unprovoked act of rebellion and we were quite justified in dropping 50 tons of nerve gas on it.

Jack Nicholson: 'cause it (censored) wanted to. That's the (censored) reason.

Pyrrho the Skeptic: What road?

John Sununu: The Air Force was only too happy to provide the transportation, so quite understandably the chicken availed himself of the opportunity.

Sappho: Due to the loveliness of the hen on the other side, more fair than all of Hellas' fine armies.

Henry David Thoreau: To live deliberately ... and suck all the marrow out of life.

Mark Twain: The news of its crossing has been greatly exaggerated.

Stephen Jay Gould: It is possible that there is a sociobiological explanation for it, but we have been deluged in recent years with sociobiological stories despite the fact that we have little direct evidence about the genetics of behavior, and we do not know how to obtain it for the specific behaviors that figure most prominently in sociobiological speculation.

Joseph Stalin: I don't care. Catch it. Crack its eggs to make my omelette.

Captain James T. Kirk: To boldly go where no chicken has gone before.

Machiavelli: So that its subjects will view it with admiration, as a chicken which has the daring and courage to boldly cross the road, but also with fear, for whom among them has the strength to contend with such a paragon of avian virtue? In such a manner is the princely chicken's dominion maintained.

Hippocrates: Because of an excess of phlegm in its pancreas.

An Andersen Consultant: Deregulation of the chicken's side of the road was threatening its dominant market position. The chicken was faced with significant challenges to create and develop the competencies required for the newly competitive market. Andersen Consulting, in a partnering relationship with the client, helped the chicken by rethinking its physical distribution strategy and implementation processes. Using the Poultry Integration Model (PIM) Andersen helped the chicken use its skills, methodologies, knowledge capital and experiences to align the chicken's people, processes and technology in support of its overall strategy within a Program Management framework. Andersen Consulting convened a diverse cross-spectrum of road analysts and best chickens along with Andersen consultants with deep skills in the transportation industry to engage in a two-day itinerary of meetings in order to leverage their personal knowledge capital, both tacit and explicit, and to enable them to synergize with each other in order to achieve the implicit goals of delivering and successfully architecting and implementing an enterprise-wide value framework across the continuum of poultry cross-median processes. The meeting was held in a park like setting enabling and creating an impactful environment which was strategically based, industry-focused, and built upon a consistent, clear, and unified market message and aligned with the chicken's mission, vision, and core values. This was conducive towards the creation of a total business integration solution. Andersen Consulting helped the chicken change to become more successful. Finally, in case someone thinks this has a distinctly anti-Republican bias, the following has been added for balance:

Bill Clinton: No one has ever offered one shred of evidence that the chicken went anywhere near the road. Anyway, answering this question will not educate a single child or provide a single senior citizen with medical care.

Hillary Rodham Clinton: Wait a minute! Chickens? That's domestic policy! You promised that to me, Bill!