NOT THE BEST WEATHER DAY FOR BRINGING OUR 07 JEEP LIBERTY HOME:(( 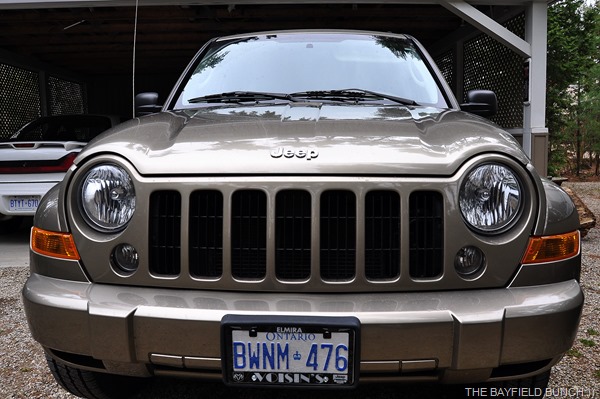 Apprehensively I glanced out our living room window this morning half expecting to see a white landscape.  I was relieved to see no such thing.  Wasn't even raining.  Bonus:))  But it didn’t last:(( 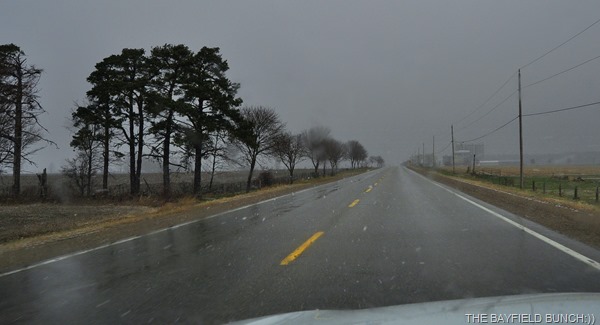 NOT TOO BAD WHEN WE FIRST STARTED OUT
We were out the door by 9 heading for Voisin Chrysler in Elmira Ontario but within minutes our Sunfire's wipers were busy fending off an onslaught of wet snow & those flurries kept it up on & off for the next hour & a half all the way to Elmira.  Sometimes snow, sometimes rain, & sometimes Graupel. (sleet)  Not a nice morning for us to be picking up our ‘new to us’ 07 Jeep Liberty.  A quick stop along the way for coffee to go at Tim Horton's in Wingham helped a wee bit to soothe our disappointment with the weather. 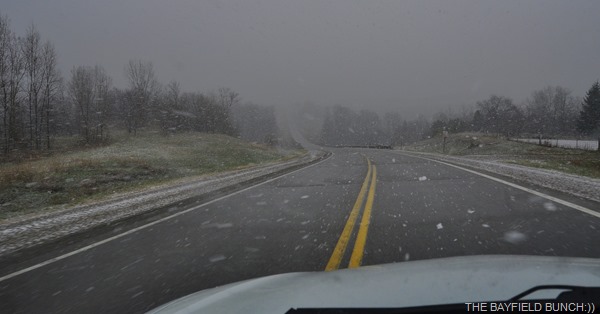 MOST OF OUR JOURNEY THIS MORNING LOOKED LIKE THIS 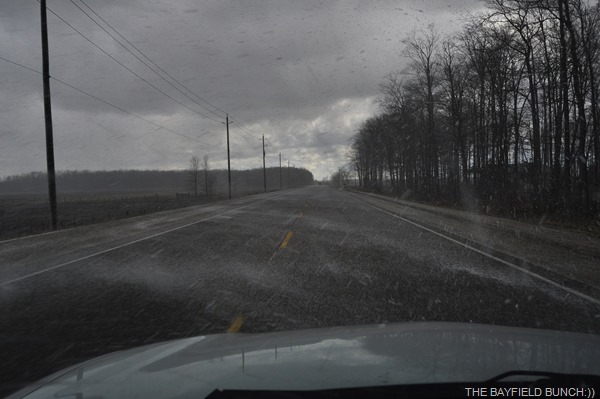 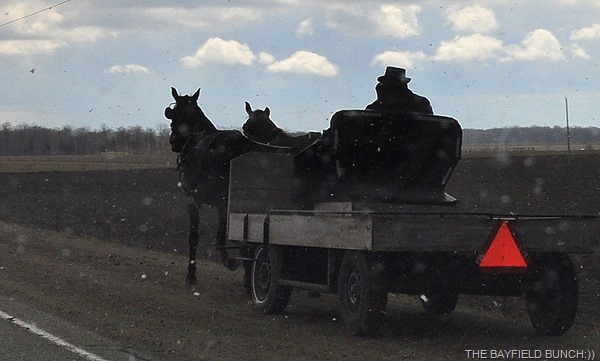 AT LEAST WE HAD THE LUXURY OF BEING WARM & DRY BUT NOT SO THIS POOR FELLOW
Soon as we pulled onto Voisin Motors lot at 11 a.m. we saw little Libby sitting there with a big orange 'SOLD' sign hanging on her mirror.  It was nice to know the new owners were us.  Ray had all the paperwork in order & everything went as smooth as clockwork.  Nice to see organization at work.  He gave us a copy of a recent work order detailing work done on the Liberty 6 months ago & he saw to it Libby had a complete set of brand new nitrogen filled tires put on.  Kelly & I both agreed we would highly recommend Voisin Motors in Elmira & especially the fella we dealt with there, Ray Frederick  We found Ray to be straight forward & honest with his thoughts & opinions.  No 'Slick Willy' stuff, no phoniness, & no BS goes a long way with me anytime I have to come in contact with a fellow human being for whatever reason. 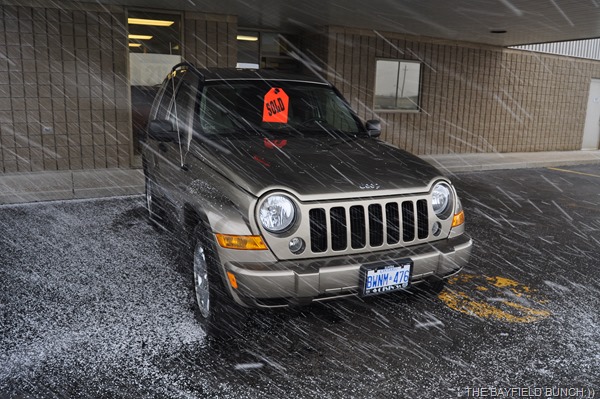 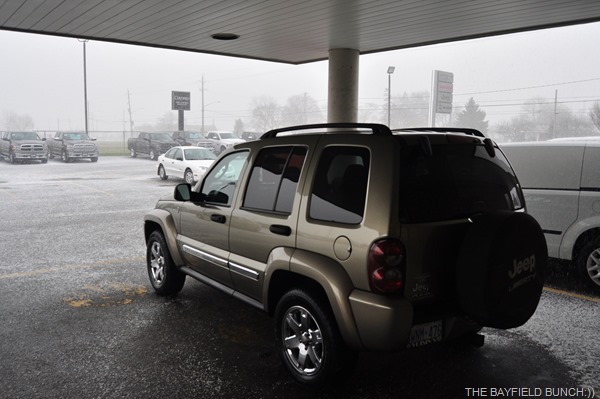 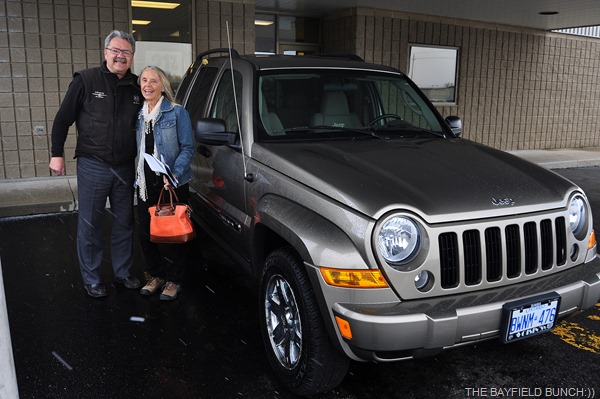 THAT’S RAY FREDERICK THE WELL ORGANIZED FELLOW WHO PUT OUR DEAL TOGETHER
We were back on the road & headed home within half an hour of arriving in Elmira.  I drove the Jeep & Kelly followed in the Pontiac Sunfire.  Very impressed with how the Jeep drove & I kept myself busily amused with new locations for switches & gauges.  The second first thing to pay attention to were the windshield wipers of course.  Yep, it snowed, rained, & graupeld most all the way home.  Nice sound system & I was quickly able to tweak it to where it was an even nicer sound system.  And how great to have a vehicle with cruise control again as well as power windows. I’m sure we will find other welcome little goodies in the coming days. 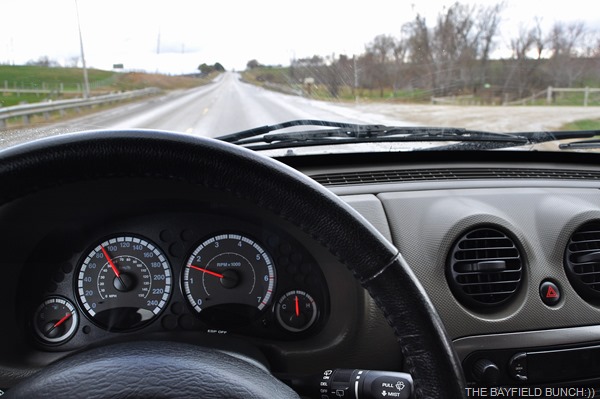 I LIKE THE LAYOUT & EASY TO READ INSTRUMENT PANEL 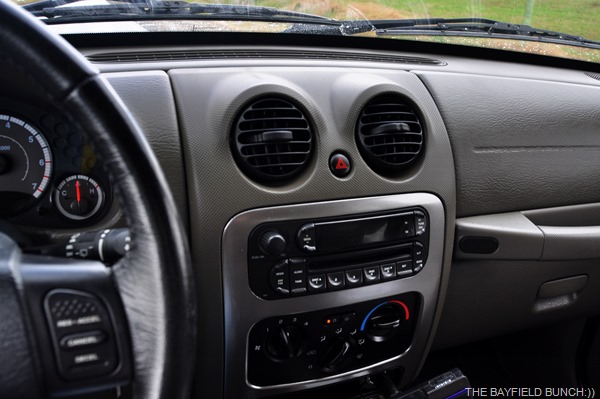 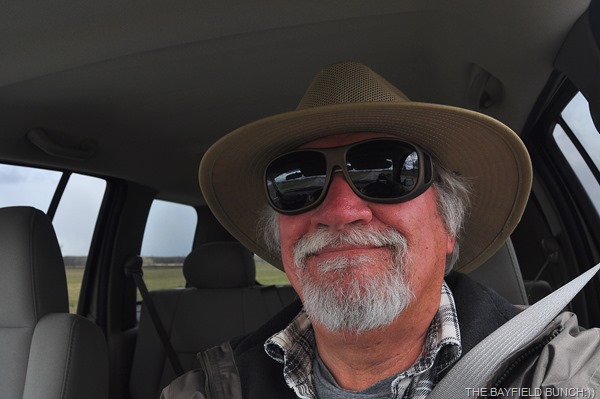 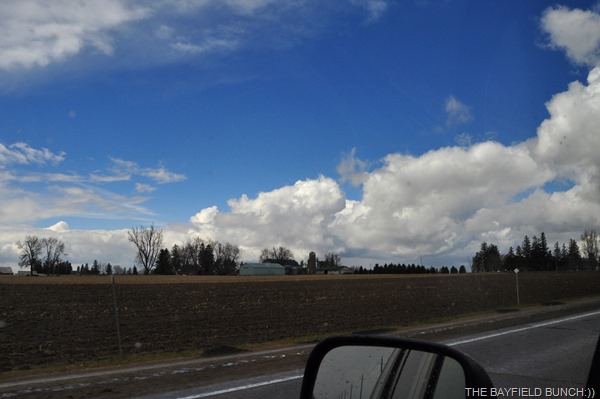 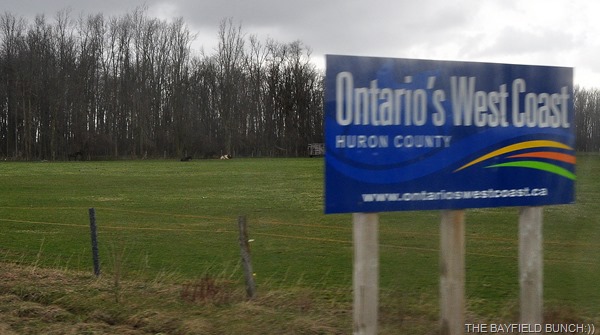 WON’T BE LONG & WE’LL BE BACK IN BAYFIELD

With snow still falling we were home about 1 o'clock.  Happy to have Libby finally in the driveway but discouraged to see both the Liberty & the Sunfire so full of road grime from today’s messy drive.  Probably going to be awhile before it's warm enough outside for me to wash them but I did manage to get a start on installing our Sirius satellite radio & antennae on the Liberty.  Well until my hands got too cold that is.  Oh well better weather days ahead except tomorrow is predicted to be colder than today.  Just be patient AL.............................. 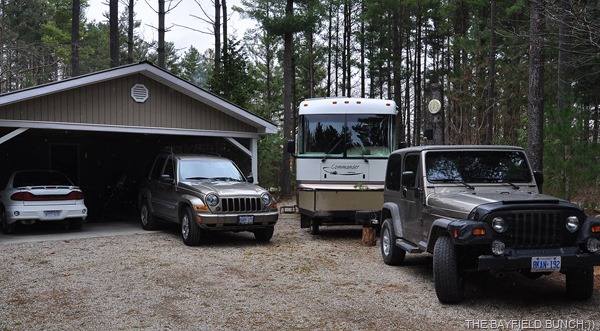 OUR DRIVEWAY IS BEGINNING TO LOOK LIKE A DEALER’S LOT 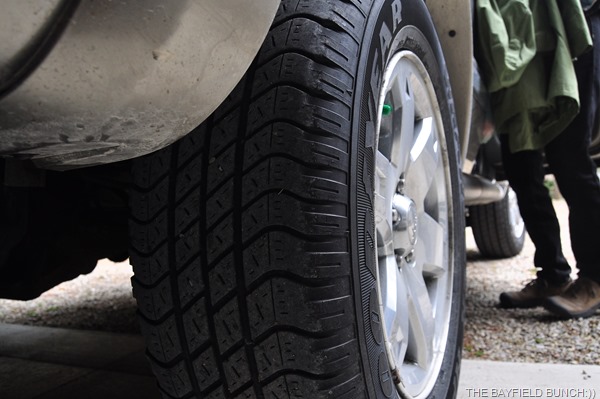 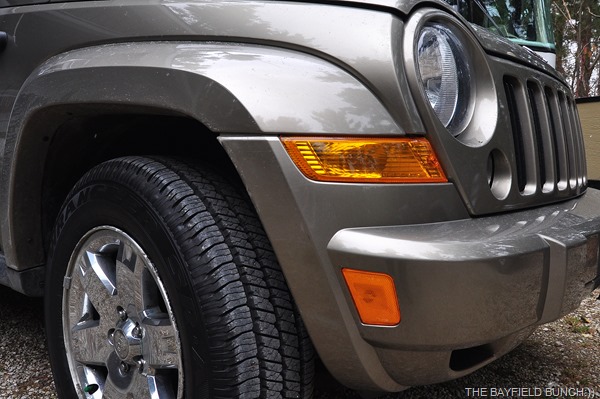 WE HAD NEVER HEARD OF NITROGEN FILLED TIRES BEFORE 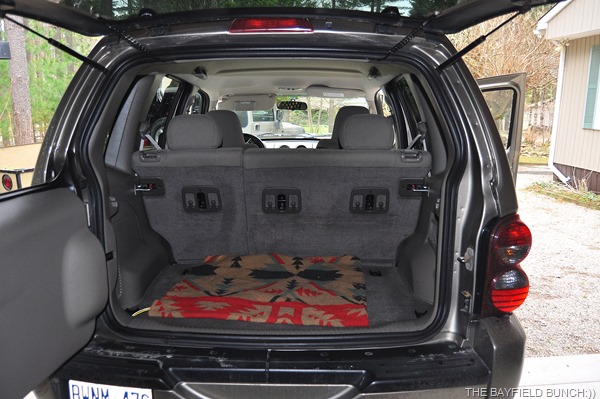 As I write this tonight it is snowing like totally nuts outside & the ground is now white.  Looks pretty of course with snow clinging to pine bows & it does bring to mind Johnny Mathis singing many of my favorite Christmas Carols & especially Sleigh Ride. (don’t forget to skip the ad)  But this isn’t exactly what we all had in mind for the middle of April eh!! 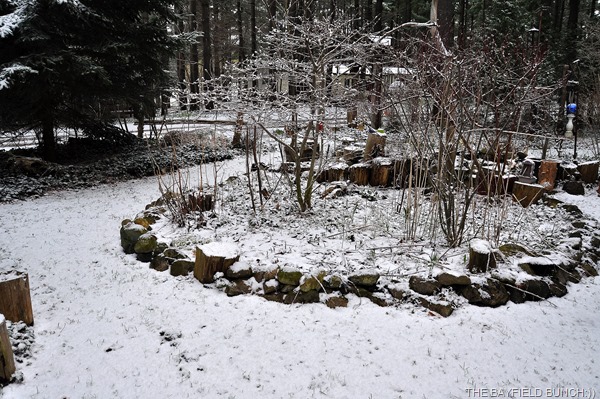 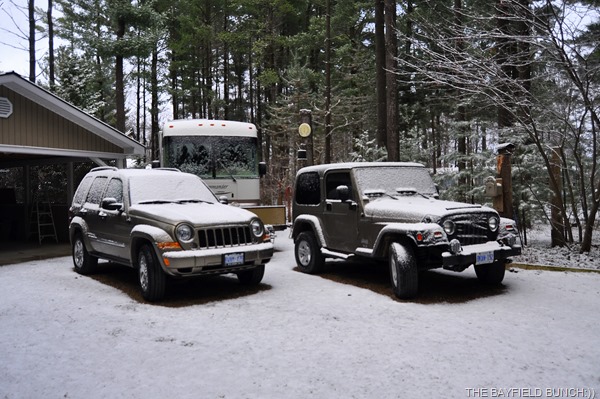 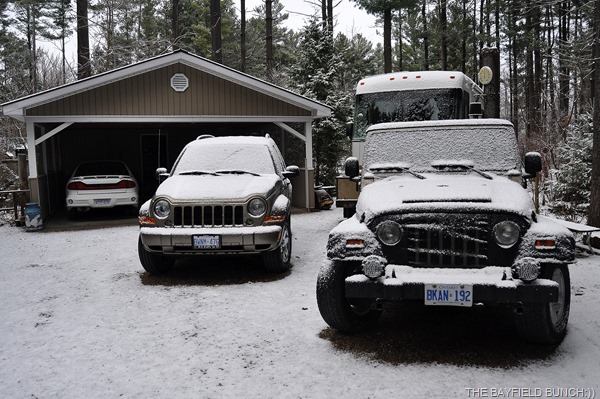 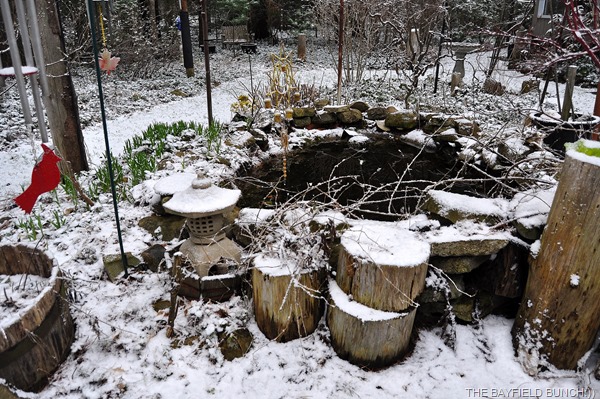 There was a fire in my neighborhood, and I arrived just in time to see firefighters carry one of their men out of the burning house and lower him to a sitting position on the lawn.
Visibly shaken, he took out a cigarette, lit it, and sat there puffing on it to calm his nerves.  "What happened to that poor guy in the house?" I asked a bystander.
He replied, "Smoke inhalation."