A FEW MORE PHOTOS TONIGHT OF OUR SUNDAY BACK ROADS DRIVE

Heard a few unusual sounds coming from somewhere when I went to bed Sunday night around 11 but by the time I thought about getting up they stopped.  Kelly was awakened by even louder sounds around 4 in the morning emanating from somewhere outside around our house.  We found out a couple hours later neighbor Monica was also awakened by a sound in her wall at 6 a.m.  Oh-Oh, we had us another Raccoon in the neighborhood. 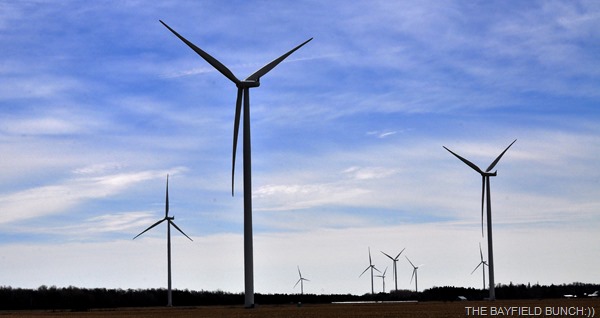 Living in a heavily forested area makes Raccoons this time of year not unusual here.  We also have Skunks, Deer, & Coyotes nearby as well.  For whatever reason Monica has had Raccoon problems for several years now with them burrowing down & coming up underneath her unit.  Plans are underway at the moment for new metal skirting to Raccoon proof her house.  Ken has set the trap again so we'll see if Monica's Peanut Butter & Marshmallow Gourmet treat will again do the trick.  In my opinion I think word has got around in Raccoonville about Monica’s peanut butter & marshmallow recipe…….D’ya think. 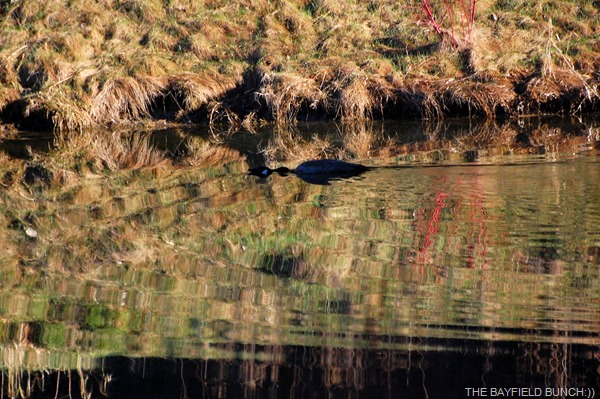 CAN YOU SEE PAPA GOOSE GLIDING THROUGH THE WATER IN STEALTH MODE
Fully expecting a cold rain soaked day how pleasantly surprised I was to see an early burst of sunshine around 11:30 this morning.  Also surprised to see our temperatures climb into the low 60's under a mixture of sun & cloud this afternoon.  That pleasant weather surprise went a long way in dragging me out of my recliner today.  I think if had I spent any more time in my cushy chair I & the recliner would have had to be taken to the hospital by truck or ambulance whereupon we would have had to have been surgically separated.

Despite our nicer weather turn-out today I just couldn't seem to get myself motivated to do any more Spring clean-up stuff whether it be around the grounds or our storage sheds.  Guess all those little tasks can wait until the spirit moves me to get at those things again.  What's the rush eh………………………………. 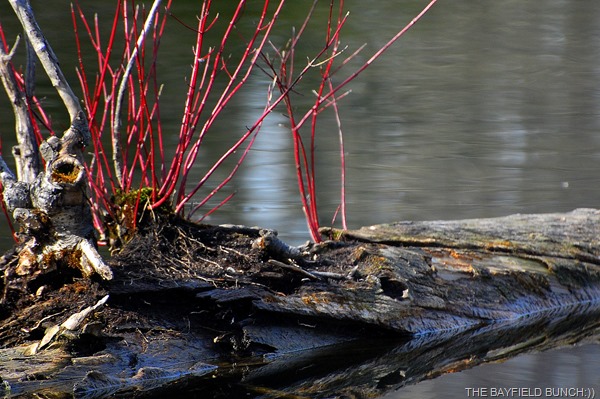 GROANER’S CORNER:(( An Easterner was riding with a rancher over a blistering and almost barren stretch of West Texas, when a strange bird scurried in front of them. Asked by the Easterner what the bird was, the rancher replied, "That's a bird of paradise."  The stranger from the East rode on in silence for a moment, then said, "Long way from home, isn't it?"