A LEISURELY SNOWFALL TODAY KEPT US GROUNDED & OUR BLUE JAYS ARE BACK:)) 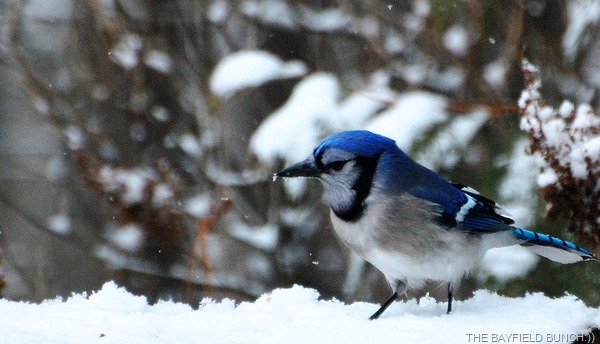 SO NICE TO SEE THE COLORFUL BLUE JAYS BACK AGAIN:))

With snow on the ground & more falling from the sky this morning it was disappointingly obvious I would not be outside doing very much of anything today.  If this was early November not only would it be disappointing but very discouraging as well but seeings how it is early April & judging from the 10-day weather forecast predicting daytime highs no lower than 40F & night time lows no lower that 33F it looks like this could very well be the last snow fall of the season.  Now that in itself is extremely if not delightfully encouraging I'd say. 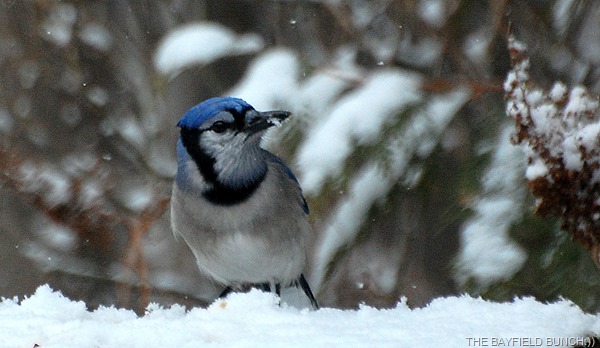 Kelly spent a big part of her day in the kitchen cooking things & making the house smell nice.  I spent part of my day in my recliner absorbing those smells & wondering what on earth she could be cooking to make things smell so nice.  I later got to eat some of those smells & finally figured it out:))

I did keep track of how much we spent on gas coming home from Congress Az this year & that number came out at $798 for 2,510 miles traveled.  Much cheaper than other year but of course those are American prices & that number will be higher once the exchange rate on the money is figured in.  Still, thanks to lower gas prices overall we did good. No I do not track the numbers of how many miles/kilometers to the gallon we get or the price of gas at each station or the number of gallons/liters taken onboard at each stop.  Mathematics is not my strong point nor is my interest in keeping track of those numbers.

YA KNOW RALPHY I DON’T LIKE YOUR ATTITUDE THIS MORNING

AND FURTHERMORE LOOK AT ME WHEN I’M TALKING TO YOU 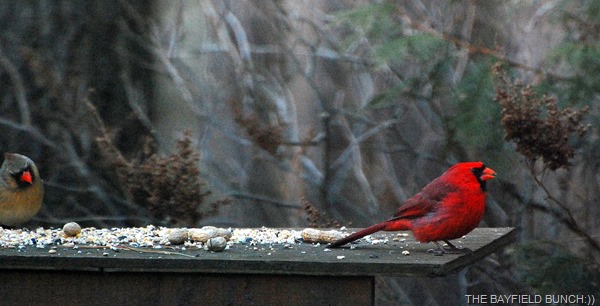 YA SURE WALK OVER TO THE CORNER & POUT NOW WILL YA!!

Been quite a few years since I have had my lined winter pants on but I’ve been wearing them for the past couple days now.  It’s not that the temperatures are bitterly cold it’s just that the cold here is agonizingly damp & it is that damp cold that plays hell with arthritis sufferers.  Lined winter pants are much better at keeping my troublesome legs warm as opposed to cold denim material found in blue jeans.  Every little bit helps. 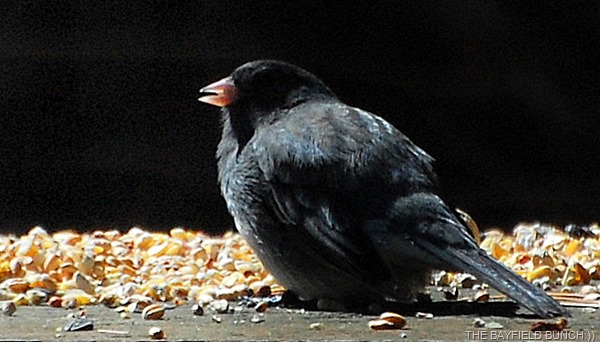 NOT SURE WHAT KIND OF THIS BIRD IS………….(UPDATE) JUDY & SHEILA AGREE IT’S A DARK-EYED JUNCO

Remembering back it was one year ago today we began our 2014 trip back to Bayfield Ontario from Congress Arizona.  We had our 26’ Class C 2012 Winnebago at the time & we we made our way up through North-eastern Arizona through South-eastern Utah & across southern Colorado.  Here is my post from one year ago today.  A FAR AWAY LOOK AT THE BETATAKIN RUINS & SOME SNOW IN THE AIR.  (Our leisurely snowfall today finally ended by late afternoon & most all of what fell has already melted) 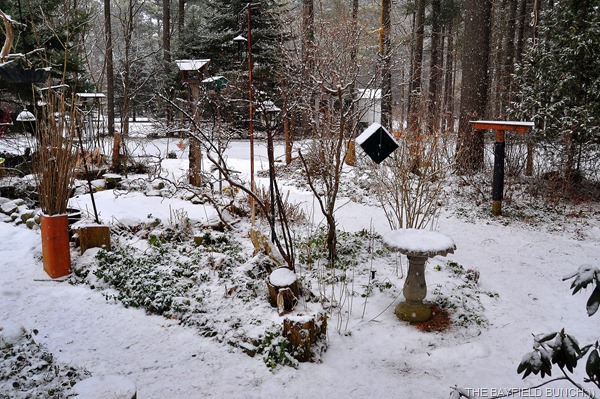 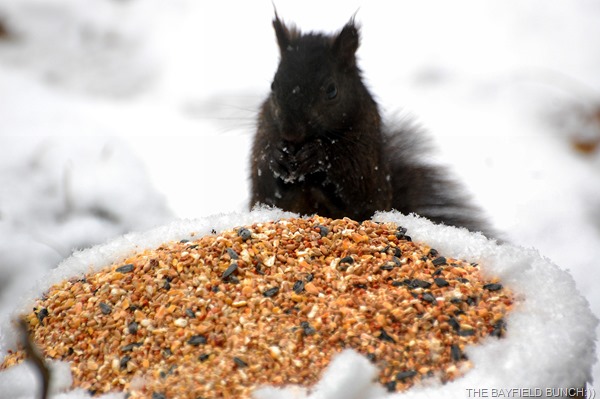 GROANER’S CORNER:(( I was nervous the night my husband and I brought our three young sons to an upscale restaurant for the first time. My husband ordered a bottle Of wine with the meal. When the waitress brought it, our children became quiet as she began the ritual uncorking.  She poured a small amount for me to taste, and then our six-year-old piped up, "Mom usually drinks a lot more than that!"

I used to think it was a silly affectation to drink different wines from different style glasses, but I have finally become a convert.  I now definitely prefer drinking hearty, macho reds from my Spiderman glass and lighter, fruity whites from my Sponge Bob glass.

The secret to enjoying a good wine is:
1 - Open the bottle to allow it to breathe.
2 - When it does not breathe, give it mouth-to-mouth.