A COLD RAINY DAY’S HOUR & A HALF DRIVE TO HANOVER ONTARIO & WHY DID WE GO TO HANOVER YOU MIGHT ASK…..HMMMMMM 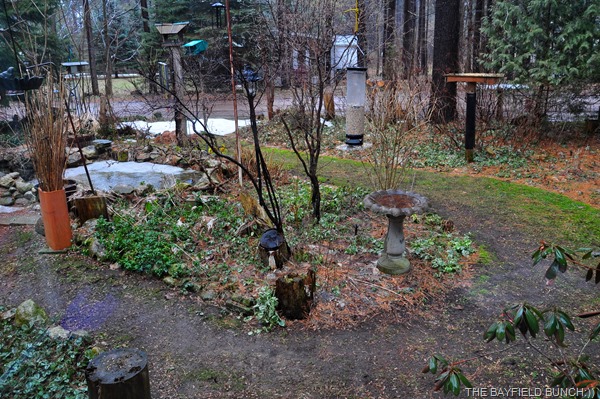 Okay, back on an even keel again folks & I’ve even managed to swoosh those occasional self doubts out the door once again so let's see what's been happening around here in the meantime.  Several months ago while still in Congress we began talking about replacing our Jeep with another vehicle.  Nothing mechanically wrong with the Jeep but with changing needs & preferences we felt it was time to maybe make a change.  But what would we replace little Jeepers with?

Our Jeep does not have A/C & with another hot humid summer approaching I do not want to be driving around in stifling heat again if I did not have to.  Maybe humidity doesn’t bother some folks but as reader’s know it sure has bothered me these past few summers.  Also as any Jeep Wrangler driver knows it is a high step & leg lift getting either in our out of a Jeep & with my current legs problem lifting my leg up over that high lip has become increasingly difficult. 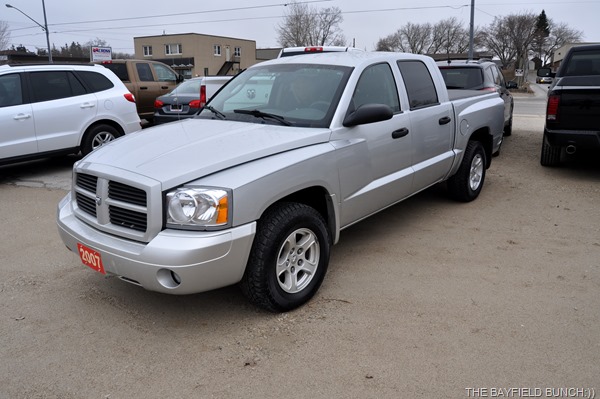 Not a lot of room inside a 2 door Jeep Wrangler & if we go for groceries we always have to leave Pheebs home because with half a dozen or more bags of groceries in the back of a 2 door Wrangler & Pheebs riding along we could end up with some very squashed bananas by the time we get home & maybe a meat package or two slightly tampered with if you know what I mean.  Also no room to carry something of any size whether it be a big chunk of desert driftwood, a player piano, half a dozen bags of peat moss or a baby Elephant.  And I’ve always had problems with where to safely put my cameras in the Jeep’s small front seat area.  Another drawback is no ventilation in the back for Pheebs.  No roll down windows & no vents.  On rare occasions if we have a couple people in the back it has been a real pain moving those 2 front Jeep seats forward & back.  And it is even a bigger PITA for people to try & get in our out of a Jeep Wrangler from the back seat.  Leslie & Peter will understand that one. 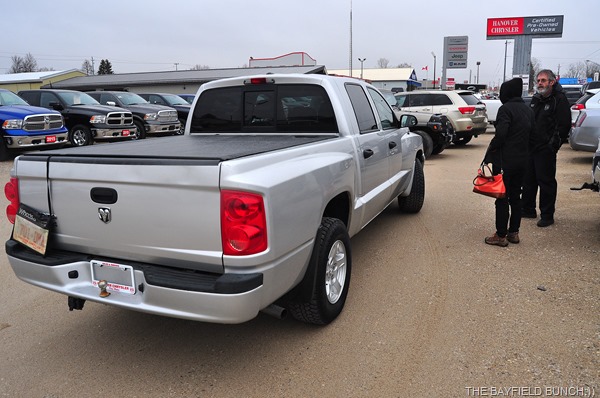 My very first car was a stick shift 4 on the floor 1961 Volkswagen Beetle & I have loved being a gear jammer ever since but again with my legs I can see where at some point operating a stiff clutch could eventually cause me some problems.  I have had lots of ‘automatics’ before so I know buying our next vehicle with an automatic transmission is probably a good idea.  Jeeps are notorious for poor gas mileage & a bumpy bouncy ride so anything else has to be an improvement on that.   Might sound like I am doing a bit of Jeep bashing here but I’m not.  There is no such thing as a perfect vehicle & sometimes we just have to adapt to our changing conditions. 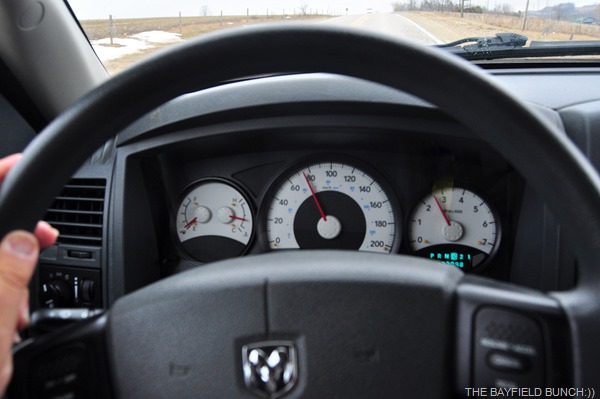 I have loved our 2006 Jeep Wrangler TJ Sport right from the day we bought it & out of all the 40+ (or is it 50+ now) vehicles I have owned this Jeep has been my all time favorite bar none.  Maybe not real practical for a lot of applications but it has always been a blast to drive & it has been totally reliable & durable.  With it’s short wheelbase, high clearance & 4x4 abilities we have seen many things in the South-west we never would have seen & that is precisely why we bought it in the first place back in June of 2010.  But if we do decide to replace the Jeep what will we replace it with?  What kind of a vehicle can still take us out into the desert to places we would like to go & moderate mountain roads we would like to climb? 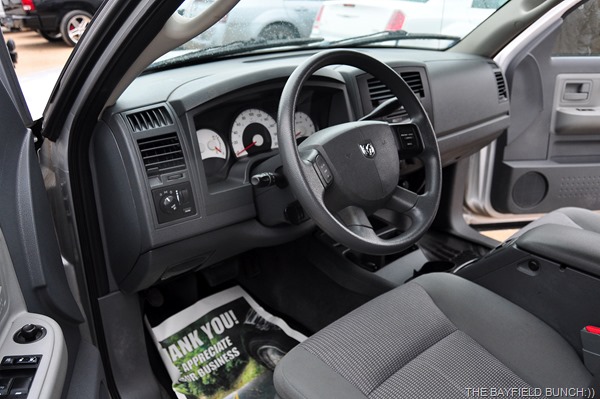 First, whatever we replace Jeepers with has to be 4 wheel drive for sure & has to be towable 4 wheels down.  No tow dollys!!  We need & want more room inside a vehicle complete with some kind of reasonable back seat.  Also want a cargo space of some kind.  Better gas mileage & a smoother ride would be nice as well.  And if for whatever reason we wanted to drive to Florida or Arizona without the Motorhome we want a vehicle we can comfortably do that in if need be.  Cruise control & power windows would be nice especially to open a rear window for Pheebs.  Also want a vehicle capable of towing a small enclosed utility trailer, etc.  So what kind of a vehicle would cover all our needs & wants then? 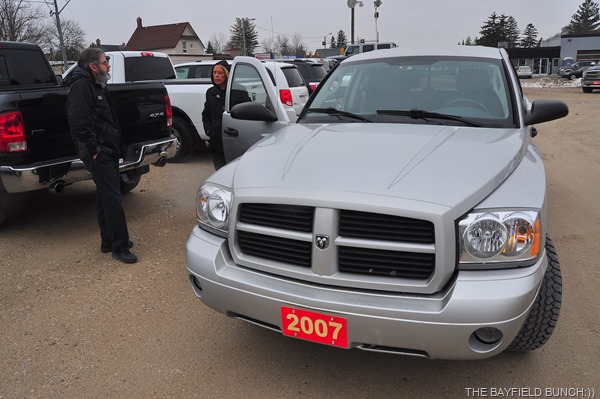 Guess by now judging from the photos you know what we pretty much have decided on.  A small size 4x4 pick-up truck with 4 doors & a short box outside cargo area.  We have been going through ads for 2 months now looking at Chevy Colorados, Nissan Frontiers, Dodge Dakotas, Honda Ridgelines, GMC Canyons, & Toyota Tacomas.  And we have been looking at lots of them, reading many reviews good & bad.  Like I said there is no such thing as a perfect mechanical vehicle & they all without exception have their flaws, faults, & weak points.  We ruled out the Honda Ridgelines pretty quick when we found out they cannot be towed 4 wheels down plus the prices for used Ridgelines was prohibitive as were for any older Toyota Tacomas.  Seemed to be a lot of mechanical problems with the Nissan Frontiers & we knew parts for them were going to be more expensive than North American vehicles.  Canyons & Colorados come with smaller 4 & 5 cylinder engines & I read some complaints about them being underpowered.  Of all the small trucks I liked the looks of the Dodge Dakotas best but they have a record of front suspension problems.  Both Dakota’s & Ford Rangers are no longer in production but there are plenty of Dakotas still on the road.  After reading many reviews we kept coming back to the Dodge Dakotas.  They come in V-8’s & V-6’s & this particular Dakota is slated for front end suspension work in the next couple days.  Aging parts are being replaced as part of the overall safety inspection.

All mid size truck ads we looked at the vehicles had well over a hundred thousand miles on them with some over the two hundred thousand mark but Wednesday Kelly found a low-miler on-line at a dealer in Hanover Ontario.  Today we took a drive to Hanover (hour & a half one way) to have a look at a 2007 Dakota with 88,000 miles.  This truck had all the necessary things on it we were wanting & the light silver gray color was totally acceptable.  It’s a clean truck, no rust because it has been undercoated, well maintained, has it’s service records & was originally sold at this same Chrysler dealership by the same salesman we talked to today.  It’s second owner traded it in for a larger Mini-Van to accommodate his growing young family & it was the same salesman who re-sold it again so he knows the truck well.

In the past we have had 3 full size pick-up trucks (Dodge Ram, Chevy Silverado, GMC Sierra) & I have had 3 small pick-up trucks.(2 Mazdas & a Ford Ranger)  The 07 Dodge Dakota we took for a test drive today had a V-6 engine in it & I was surprised at the torque & power it had.  Had I not known it was 6 cylinder engine I would have thought it a V-8.

Soooooooo are we going to buy this truck??  Maybe, maybe not.  It is a decision we will have to pour over for the next few days.  If we do will we trade in the Jeep??  No, we will sell the Jeep privately.  We know we can get far more for the Jeep than any dealer is going to offer us for it.  By the way Jeepers has about 119,000 miles on her, runs great, & has no known mechanical issues we know of. 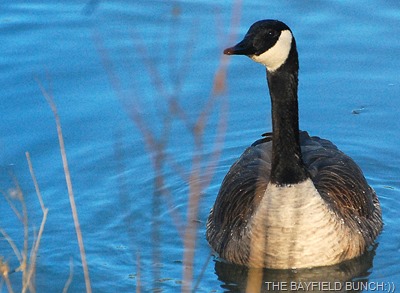 So that was the reason for our cold rainy day drive to Hanover Ontario & back.  We did cruise through half a dozen car lots in Listowel Ontario on our way home just to see what they had but smaller 4x4 4 door trucks are hard to find regardless of make or model.  They are generally snapped up pretty quick.  The Dakota we drove today was just listed several days ago.  So there you have it, that’s what has been happening here on our side of the street & I think old Blabberfingers here did pretty good at not mentioning any of this for the past couple months.  Oh, & what initially kicked off our interest in small pick-up trucks all of sudden you may wonder.  Well I’ll tell you that tomorrow night if I don’t forget of course but I will tell you now that it all started in a Wickenburg Arizona parking lot way back in February…………….:))

GROANER’S CORNER:(( A window salesman phoned a customer. "Hello, Mr. Brown," said the sales rep. "I'm calling because our company replaced all the windows in your house with our triple-glazed weather-tight windows over a year ago, and you still haven't sent us a single payment."  Mr. Brown replied, "But you said they'd pay for THEMSELVES in 12 months."

Short and baby-faced, my buddy Wiggins had trouble being taken seriously in the Army. A mustache, he assumed, would fix that. He was wrong.  "Wiggins!" bellowed our drill instructor after spotting the growth during inspection. "What's so special about your nose that it's got to be underlined!!