Set our watches & clocks ahead one more hour one last time this morning I feel my body now knows it is finally back on good old Ontario time.  First time in a long time I didn’t wake up with it being still dark out.  We were up & on the road headed east about 8:45 a.m. Ontario time.  I was surprised right off the bat by I-80’s lite traffic.  I had over estimated the congestion problem but that’s Okay because I prefer to err on over estimating a problem rather than underestimating a problem.  It’s a much better feeling when one discovers one’s error:))

Traffic picked up around 11:15 as we approached the west side of Chicago & by high noon we were right in the thick of things.  Threw a couple extra logs on the fire & muscled our way right through the heavy noon hour rush.  In my opinion this is where a GPS system really shines.  Our Garmin Gertie is 8 years old & the only time we ever call upon her services is when we have to make our way through cities.  Kelly programs her ahead of time & I just follow Gertie’s voice prompts all the way through the city.  ‘Stay left, stay right, turn left in half a mile, proceed 22 miles, etc. etc.’  Knowing what exits to use & what lanes to be in miles in advance just make the whole driving experience so much more easily doable & especially driving an RV or towing a trailer of any length. 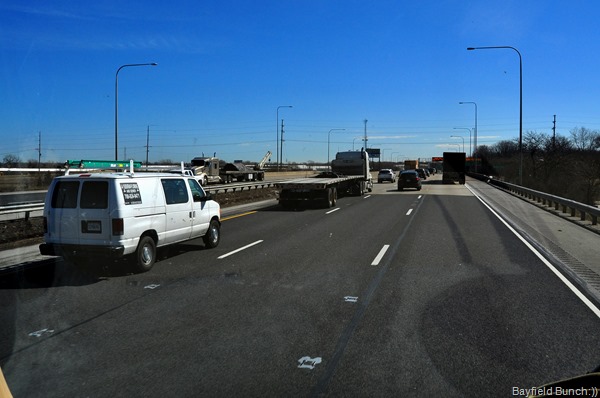 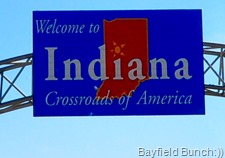 In Sunday’s post I said we wouldn’t be in another Cracker Barrel until maybe next October.  Well darned if we didn’t find ourselves in another Cracker Barrel about 2 this afternoon.  Two in less than a day.  Now that’s a first for us.  Kelly had remembered seeing Cracker Barrel’s daily special while looking over the menu Sunday & mentioned there was a Cracker Barrel ahead of us in Kalamazoo Michigan.  Well I didn’t need any convincing of course so soon as we saw the correct exit coming up we angled off I-94 & in we went for a soup & sandwich special.  Always yummy at Cracker Barrel.

Found ourselves into some nasty wind gusts when when we swung off 94 onto northbound I-69.  Luckily it was only about 47 miles to Lansing so just hung onto the steering wheel all the way.  Rolled into Lansing about 4:45 & looked us up a Walmart Super Store just off 69.  We’re just up the road from a Cracker Barrel we have been in half a dozen times or more before but we were all Cracker Barreled out & neither one of us were hungry enough for supper anyway.  If we find it a bit noisy with the 18 wheelers here in Walmart we’ll just pull up stakes & move a few hundred yards down the road to Cracker Barrel’s lot.  Next post will be from Canada………:))

We have not come across any snow anywhere yet but we understand we still have about a foot in our driveway & the area we park our motorhome.  I imagine it’s probably frozen as well so we’ll just have to deal with that little problem when we get home sometime Tuesday morning.  Also suspect snow & ice has slid off our roof & blocked our front porch steps into the house.  I will likely be busy with my pick-axe & shovel tomorrow.  Oh well after such a long leg stiffening drive I am certainly in need of some good old down home exercise.

Kelly & I don’t make a big deal of birthdays or anniversaries so maybe I had better not mention it was Kelly’s birthday today:))

GROANER’S CORNER:(( The local pub was so sure that its bartender was the strongest man around that they offered a standing $1000 bet.  The bartender would squeeze a lemon until all the juice ran into a glass, and hand the lemon to a patron. Anyone who could squeeze out one more drop of juice would win the money.  Many people had tried over time (weightlifters, longshoremen, etc.), but nobody could do it.  One day this scrawny little man came in, wearing thick glasses and a polyester suit, and said in a tiny, squeaky voice, "I'd like to try the bet." After the laughter had died down, the bartender said OK, grabbed a lemon, and squeezed away. Then he handed the wrinkled remains of the lemon rind to the little man.  But the crowd's laughter turned to total silence as the man clenched his fist around the lemon and six drops fell into the glass.  As the crowd cheered, the bartender paid the $1000, and asked the little man, "What do you do for a living? Are you a lumberjack, a weightlifter, or what?"  The man replied, "No, I'm a tax collector."