WE MANAGED TO GET SOME FLOWERS IN THE GROUND TODAY 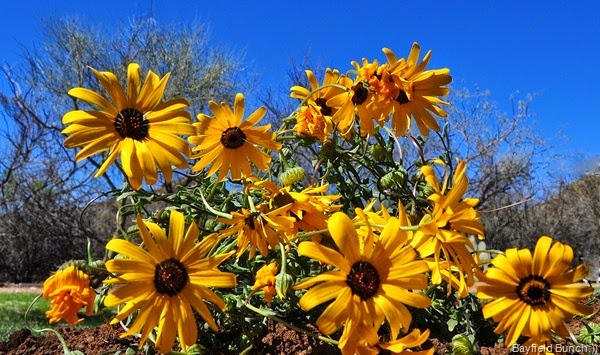 JUST ONE CLUMP OF OUR NEWLY PLANTED WILDFLOWERS THIS MORNING

One of the first things I do every morning after stepping outside it is to walk around & see if the rabbits have chewed up any cactus.  So far so good since planting a bunch of new cactus pads a week ago.  My adobe brick barricades seem to be repelling all wascally wabbit intwuders so far. 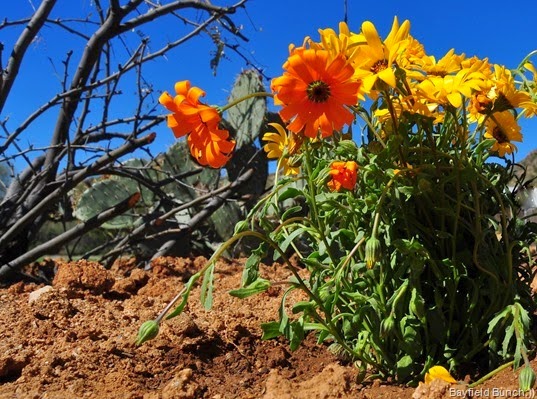 Feeling a bit energetic & while our morning air was still cool I waxed (Meguiar's) the front end of our motorhome & part way back on the south facing drivers side which  bears the brunt of Arizona’s hot sun every day.  Before waxing I decided to remove some black streaks with some Meguiar’s black streak remover.  Brand new plastic bottle & I had never used it before.  Walking around a front corner of our rig the slippery plastic bottle just slipped right on out of my hand.  Soon as it hit the ground one whole side just busted right out.  I stood there & watched $14.00 worth of Meguiar’s black streak remover drain away into the ground. 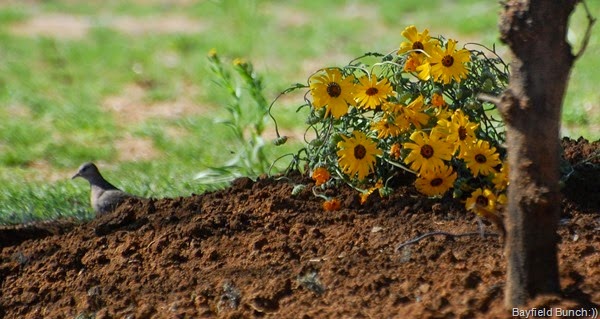 We knew it was going to be a warm day (mid 70’s) so Kelly & I hopped in the Jeep about 9 & headed around the corner to our neighbors.  Lew was working on a vehicle but pointed out where all the flowers were we could have.  Said to take as many as we wanted but we didn’t want to get him in big trouble with his wife Shirley who was at work so we were careful not to be greedy.  Came home & planted maybe 25 groups of daisies & poppies at various locations around our property.  Some were already going to seed so that is good.  With a bit of luck we should have some nice spring flowers growing next year at this time. 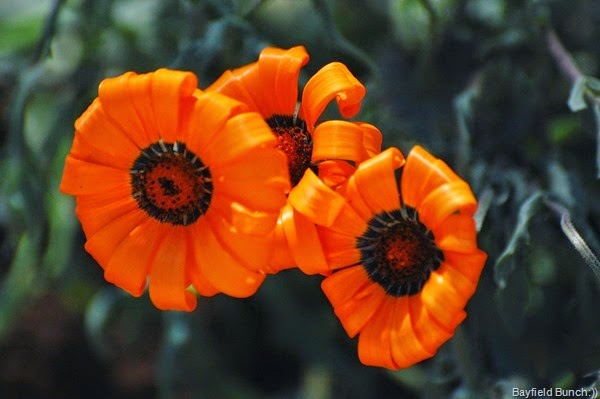 Finished my latest paperback book by Bill Bryson.  What a great read One Summer: America, 1927 was & I would recommend it to anyone with any kind of interest with America’s history.  Bryson has a knack for intertwining people, places, & events in such a way as to make it all so very interesting.  No dull moments.  What I like about reading non-fiction is the learning process that goes along with the reality of what I am reading.  As often as not facts can literally be stranger than fiction.  All the era’s mystery & intrigue are in this book along with many colorfully real characters from the past.  If your looking for murders, trysts, record breaking accomplishments, natural & man made disasters, shady characters, who, what, & why the stock market crash of 1929, inventions that changed our lives, Al Capone, American Presidents, Babe Ruth, who invented what, the not so clever Henry Ford, & how did Charles Lindbergh go from America’s greatest hero to almost one of America’s most looked down upon characters.  What did he have to do with Adolph Hitler & his Nazi party?  It’s all in the book of course & how different today’s society form then till now.  Oh we still have all the main ingredients of course with greed & lust being just two of our many human familiarities & frailties but oh what a different mind set today from yesteryear. 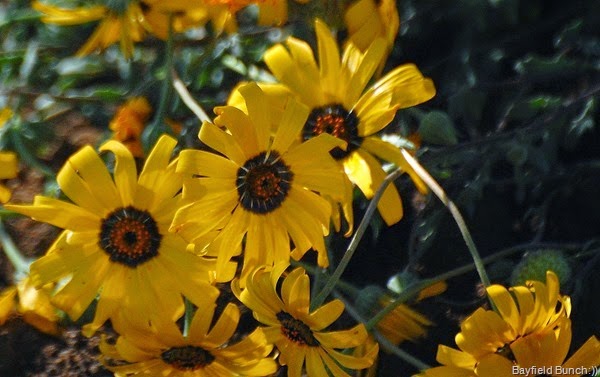 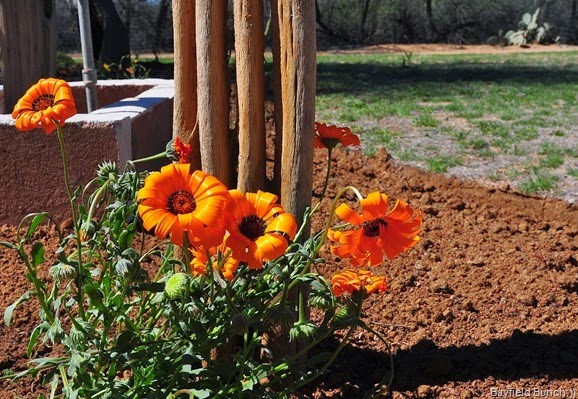 Headed off to Wickenburg for groceries at Safeway earlier today.  Surprised at the steady stream of traffic heading north on 93.  Figure it’s the Phoenix crowd heading for a Las Vegas week-end get-a-way in Nevada. 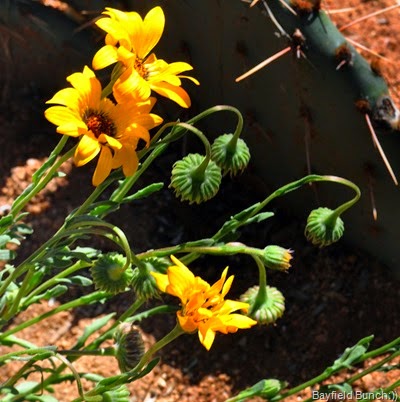 <<< SEED PODS CAN BE SEEN HANGING DOWN

After 3 years of leaky taps dripping water it is sure nice to have ourselves two new sets of faucets.  One at the kitchen sink & the other at my bathroom sink just off my bedroom.  Always bothered me seeing those taps drip, drip, dripping knowing of the water waste involved.  Not to mention we pay for our water here too.  Our handyman Les had tried putting new washers in the old 50’s taps but to no avail so Kelly picked up 2 new faucet sets awhile back.  Les in his busy schedule found time Thursday to hook them up for us.  Not something I was going to try.  We’ve all seen the cartoons of husbands fixing plumbing stuff then seeing water coming out of light sockets or spraying all over the place like a geyser on steroids.  Well I’m the guy in those cartoons & if I’ve learned anything in life it’s not to mess with certain mechanical things.  I do not have a good ‘handyman’ track record:(( 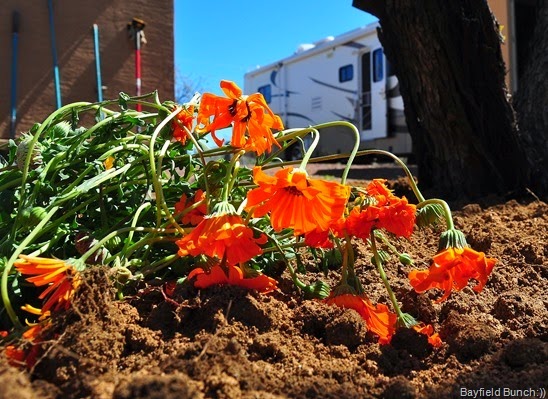 SOME FLOWERS WERE DROOPY FROM BEING TRANSPLANTED

A couple readers asked about watering things like flowers & trees during hot summer months when we are not here.  We have nothing planted which requires water.  We tried some shrubs a couple years ago but they never made it because we were not here in the summer to keep them watered.  These Spring flowers we are planting now will only bloom for another week or two then they are dormant until about the middle of next February when winter rains once again begin their growing process.  No watering required on our part. 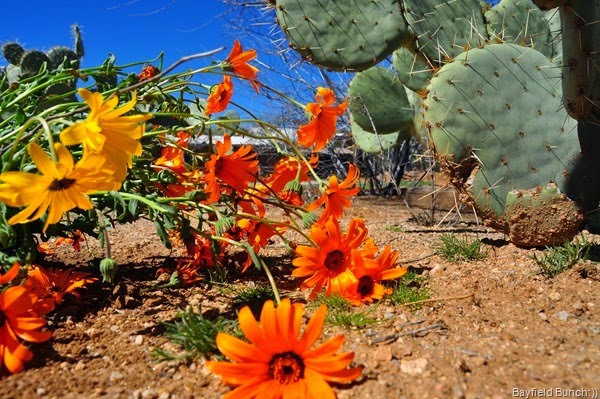 With our bird feeder now in a new location I figured I had better see if I could find myself a new position for bird photos not too close to the feeder.  Sitting in the shade of our shed I was able to grab a few shots this afternoon. 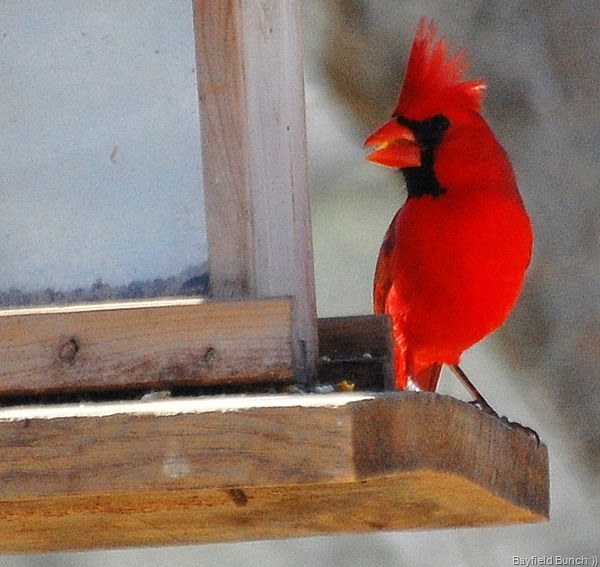 CARDINALS HAVE THE PRETTIEST OF SONGS 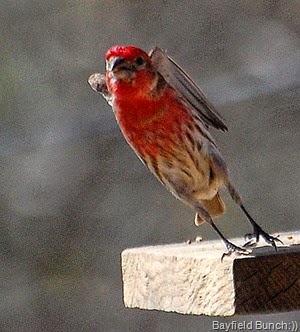 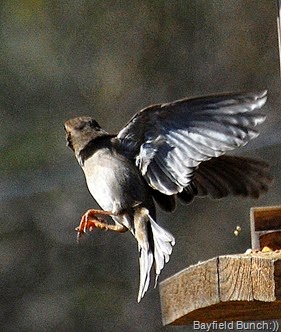 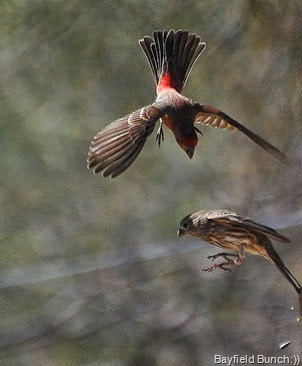 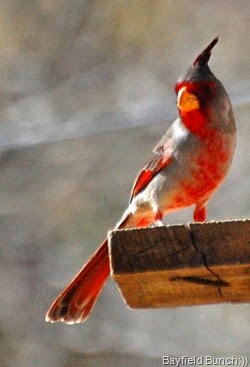 Here’s a question for readers.  Does anyone happen to own a mid-size pick up truck quad cab 4x4?  Dodge Dakota’s were popular a few years ago & if anyone has one I’m curious to know what they think of the truck & whether they like it or not.  What’s good about them & what’s not so good about them.  Nissan also builds a mid size 4 door quad/crew cab as well.  I know Chrysler stopped production of the mid-size Dakota’s a few years ago.  Just curious. 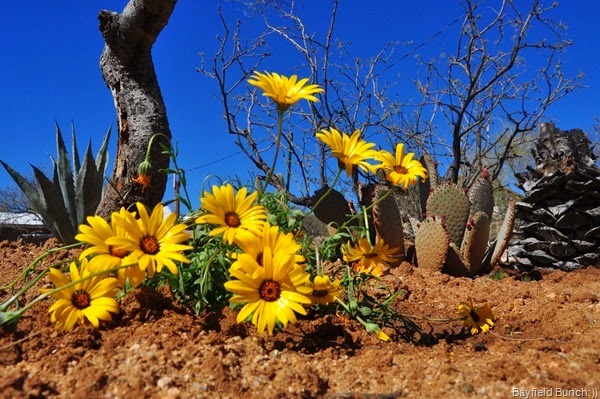 GROANER’S CORNER:(( A man goes to a doctor for a routine physical. The nurse starts with the basics.  "How much do you weigh?" she asks.  "Oh, about 165." he says.  The nurse puts him on the scale. It turns out that his weight is 187. The nurse asks, "Your height?"  "Oh, about six feet," he says.  The nurse checks and sees that he's only 5 feet 8 3/4 inches. She then takes his blood pressure, and it's very high.  "High!" The man explains, "Of course it's high. When I came in here, I was tall and lanky. Now, it seems I have somehow turned out to be short and fat!"

While practicing auto-rotations during a military night training exercise, a Huey Cobra messed up and landed on its tail rotor so hard that it broke off the tail boom. Fortunately, however, the chopper remained upright on its skids, as it slid down the runway, turning in circles.
As the Cobra slid past the tower, trailing a brilliant shower of sparks, this was the radio exchange that took place . . .
Tower: "Sir, do you need any assistance?"  Cobra: "I don't know, Tower. We ain't done crashin' yet!"