THIS MONTH’S FULL MOON WILL BE OUR LAST FULL ARIZONA MOON UNTIL NOVEMBER:((

NEST BUILDING IS WELL UNDER WAY AROUND OUR HOUSE

Biting cold north wind first thing this morning had us in our winter duds.  Couple hours later our Arizona winds died down & it was short sleeves & sitting in the sun time for Kelly.  I busied myself planting a few more pieces of dead Saguaro skeletons we have picked up in our desert travels.  By the time it occurred to take a picture of them they were already on the shady side of the house.  Tomorrow. 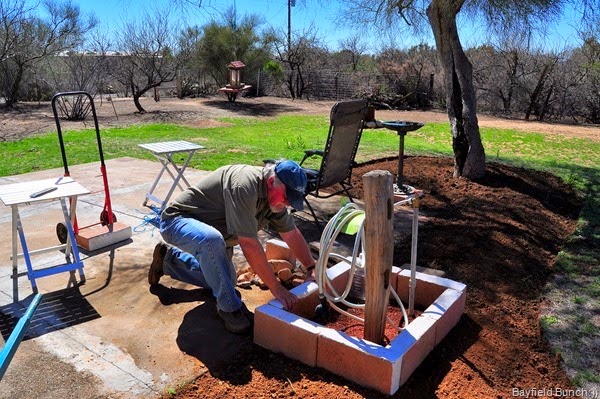 PUTTERING ABOUT IN THE YARD TODAY

Put a small cement brick border around our water faucet which is now in our new flower garden & moved the birdbath & bird feeder into that same area as well.  This will bring the birds closer to the house where we can see them better & closer to a water supply for keeping the birdbath topped up.  Because of Palo Verde tree roots I do not want to dig a small pond into the ground so I have to keep an eye out now for some kind of large shallow container to hold water.  I will then blend that container in using dirt, rocks, plants, pieces of desert wood, etc.  And I want to keep the pond under the tree for shade purposes which means the pond will be in & part of the flower garden.   Needless to say I am feeling much better this week now that I have my teeth into another project again:)) 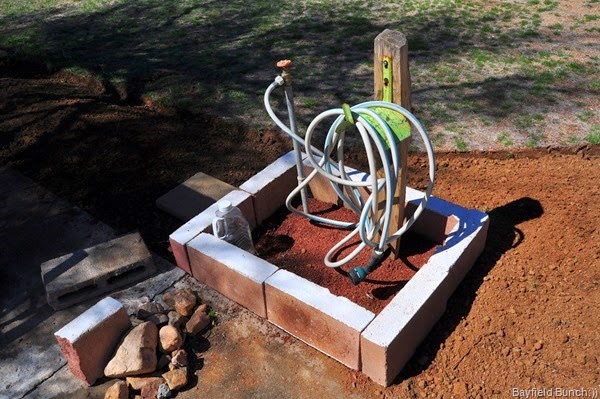 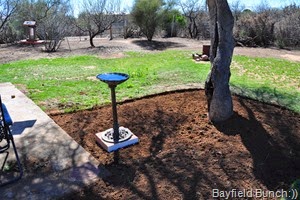 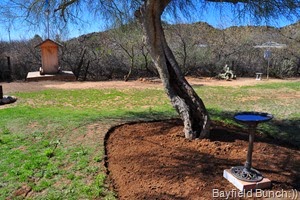 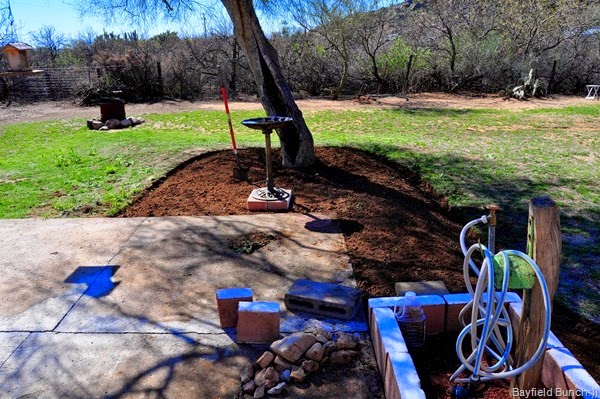 POND WILL GO ABOUT WHERE THE RED SHOVEL IS

We had a tiny water leak in the main part of the house from our recent rains so I was up on the roof today with some tar patching a small hole I found when an older tar job had dried out & cracked.  Took a few photos from the roof while I was up there. 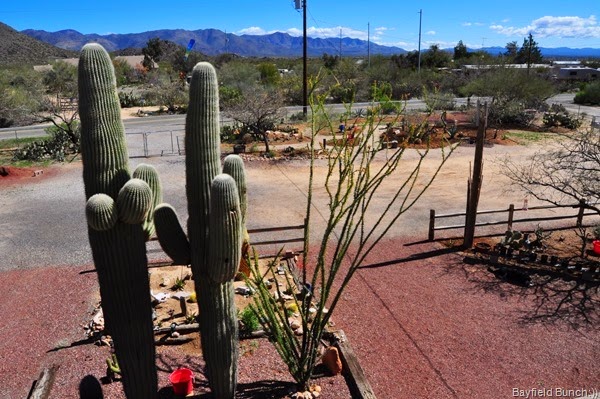 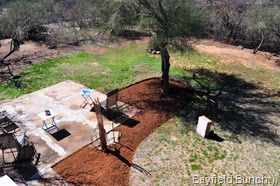 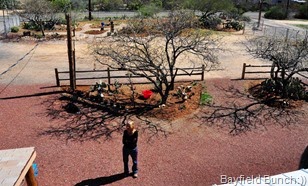 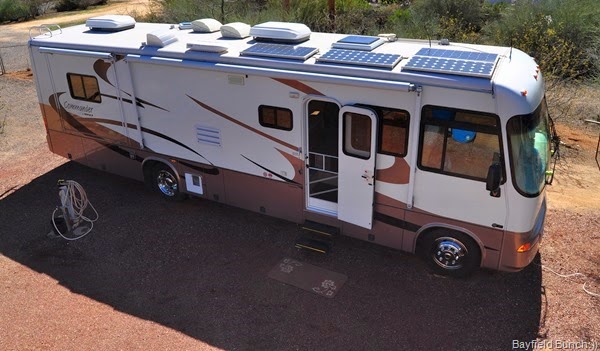 Not often we see Arizona’s Grand Canyon or Hoover Dam from the air but Darrell from Goza’s Wanderings & Wonderings hopped himself aboard a 20 passenger sightseeing plane & took some aerial photos over the dam & canyon.  Must say I am amazed at the quality of photos this fella consistently gets from his cell phone.  Check out Darrell’s Aerial Exploring.  And the Furry Gnome from way up there in frozen Ontario Canada is still getting out most days taking lots of great freezing cold snowy scenery photos.  I have memories of many beautiful winter days but I have only a handful of digital photos but that’s OK I don’t mind at all if someone else braves freezing cold days to show the rest of us the beautiful side of winter.  Hogg's Falls………Winter Fences. 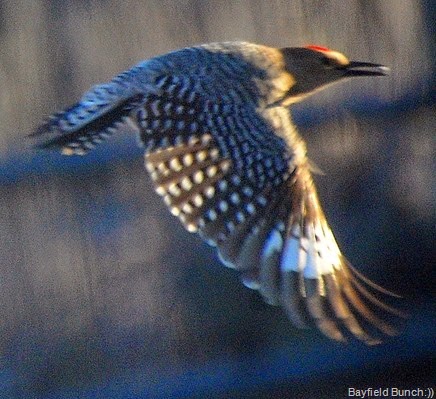 A BIT BLURRY BUT IT’S A GILA WOODPECKER IN FLIGHT 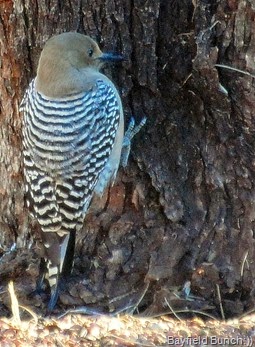 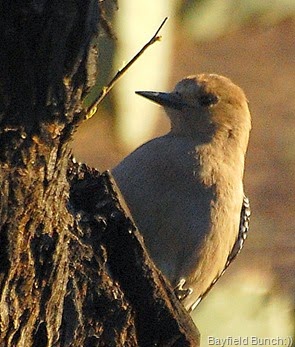 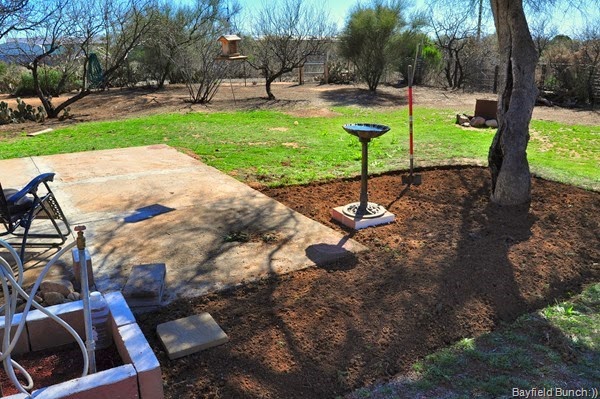 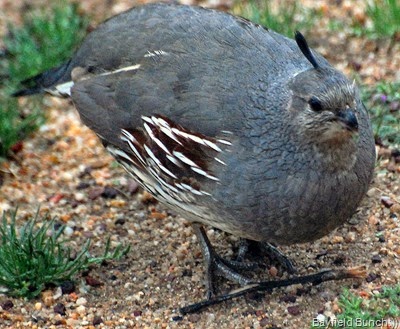 Gene in Ohio had a Shout Box question asking how long it took me to dig that section of flower garden in our back yard Tuesday.  I took a couple breaks doing it but I would say about half an hour to dig, edge, & rake it out.  A half hour enjoyably spent I might add.  And someone else asked awhile back if I had painted our inside front door yet.  Answer is no & that is because I simply had forgot about that.  Thanks for the reminder.  Another little project for me.  And I think someone else asked if we would be planting native wildflowers & the answer is yes.  Same kinds as our neighbor has blooming right now.

Watching tonight’s Moonrise it occurred to me this will be our last Arizona full moon for the next 7 months meaning we’ll likely not see another desert moon until November later this year.  I so much look forward to each full moon every month here in the southwest & so enjoy how it’s soft glow bathes this mystic desert landscape we live, love, & travel in………………. 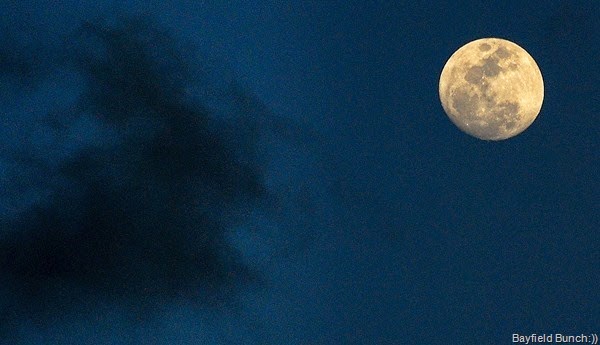 TUESDAY NIGHTS NEARLY FULL MOON WITH A TOUCH OF CLOUDS

GROANER’S CORNER:(( I was driving my father and grandfather down a rough country road. My inexperience in handling Grandpa's four-wheel-drive vehicle made for a particularly bouncy ride.  Embarrassed, I offered a lame excuse, "The sun shadows through the trees make it hard for me to see all the potholes." "Don't worry," Grandpa said. "You're gettin' most of 'em."

As the passengers settled in on a West Coast commuter flight, a flight attendant announced, "We'd like you folks to help us welcome our new co-pilot. He'll be performing his first commercial landing for us today, so be sure to give him a big round of applause when we come to a stop."  The plane made an extremely bumpy landing, bouncing hard two or three times before taxiing to a stop. Still, the passengers applauded.  Then the attendant's voice came over the intercom, "Thanks for flying with us. And don't forget to let our co-pilot know which landing you liked best."