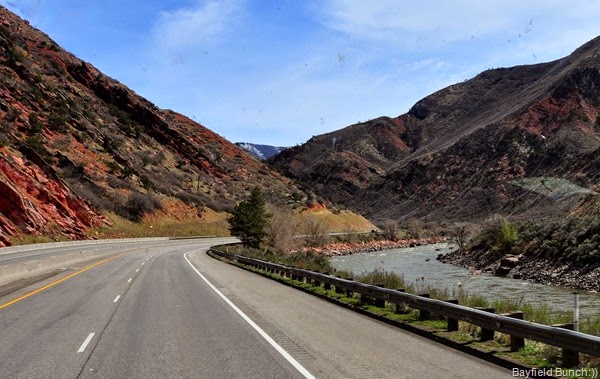 Been awhile since I’ve noticed light pollution but looking up at the sky early this morning from our KOA location here in Grand Junction Colorado I could not see many of the stars I normally take for granted seeing from our usual darker night sky locations.  Milky Way was not visible at all.  Too many people with great big honking security lights blasting out into the pristine night sky. 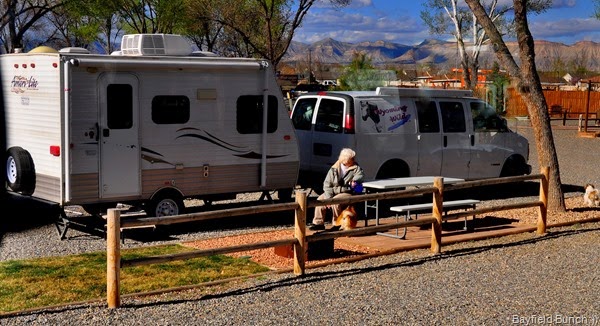 THIS LADY AT THE KOA WITH HER 2 DOGS, WHITE VAN, & SMALL WHITE TRAILER REMINDED ME OF RV SUE AND HER CANINE CREW

Rolled out of the Grand Junction KOA campground at 7:30 & had the rig at Bear Auto 10 minutes later.  Nice fellow in there took time to explain about 8.1 Chevy Workhorse engines, computers, older technology, codes, likely problems, thinner mountain air, sensors, etc. etc.  We felt confident he knew his stuff & we definitely got the feeling they were not just a ‘parts replacer’ garage.  We gave him our list of a 1000,1 things we thought might be the problem & that was it, we left the coach in their hands, crossed our fingers, & headed off to check out a few Grand Junction stores we had seen on the way in Wednesday. 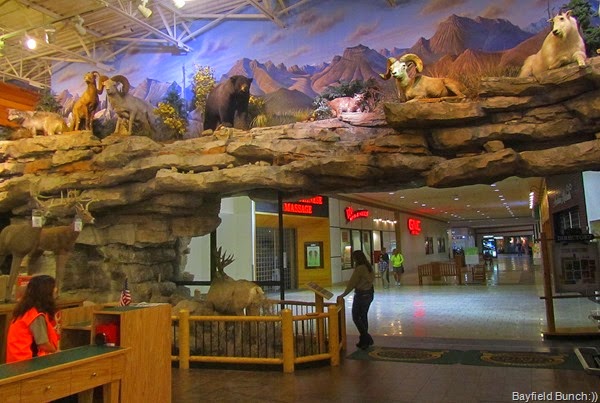 Neither Kelly or I had ever been in a Cabalas so we found the store & got ourselves in line for the day’s opening at 9 a.m.  Had in mind to find me a belt loop case for my Canon point & shoot camera.  A nice fella took us around to different departments looking for a case but no luck.  Later found one in a Best Buy store next door.  Well Cabala’s certainly is geared to the outdoor sportsman people & I can see it is a popular store.  They also have a big gun department where I’m sure the U.S. Army must get all it’s guns & ammo.  Lots of large stuffed animals all over the place as well as bird song calls in the air above.  Hey & they even have all kinds of fudge there too but none for us.  Ok, so we had some samples.  I hadn’t intended on buying a pair of shoes but Kelly spotted a pair of slip on Merrell’s & convinced me I needed them.  She was right of course but I hated spending the money.  All the time I was in that Cabala store I was in miser mood. 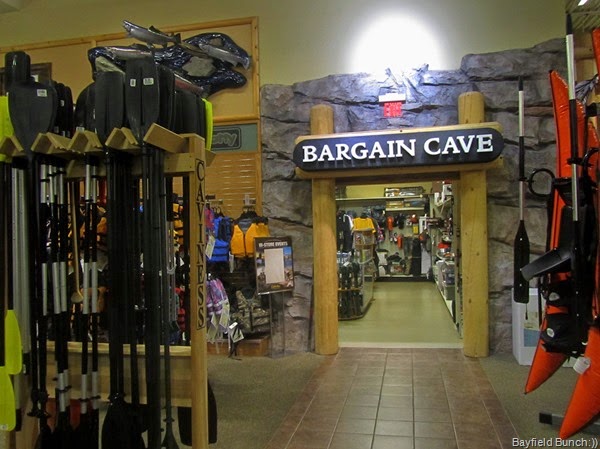 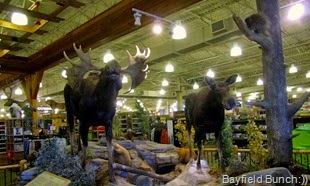 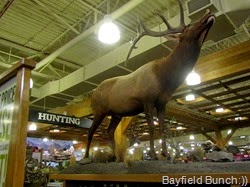 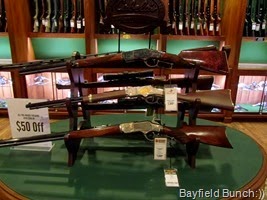 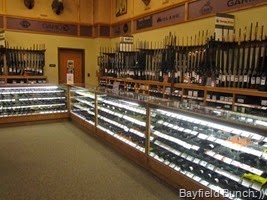 All that store browsing worked up an appetite for both of us so we slipped out to the parking lot & spotted an Ihop. (International House of Pancakes) I had never been in an Ihop before either (I live a very sheltered life) so we headed in for some breakfast.  I had my standard bacon & eggs but no pancakes.  Just as I don’t understand cheese & apple pie going together I’ve never understood bacon & eggs with pancakes either.  For me it’s one or the other!! 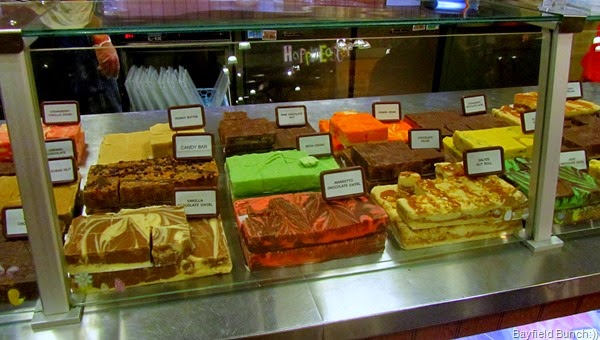 Kelly popped into another store called TJ Max while Pheebs & I hung out in the Jeep for half an hour.  While Kelly was checking out her phone rang & it was Bear Auto saying the rig was ready to go.  We weren’t long in getting our buns back to Bear Auto. 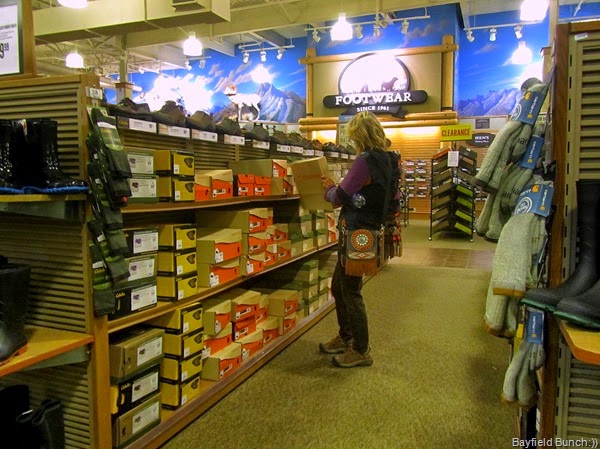 KELLY CHECKS OUT A PAIR OF MERRELL SHOES FOR ME

The garage guys checked everything over including air filter, spark plugs, O2 sensors, manifold connection, codes, & cleaned the MAF sensor.  Other than cleaning the MAF sensor they could not find a thing wrong with the coach.  They also took the rig for a run with a scanner attached & that checked out A-OK as well.  Other than suspecting ‘bad fuel’ they didn’t have any answers.  Said it is not an uncommon problems for larger rigs to run into these types of problems out here in the mountains.  Also explained how the onboard computer & the driver can be at odds sometimes over when to shift going up grades & I am finding it is better for me to decide when to shift rather than let the computer decide.  Our bill was only $88 dollars & .48 cents tax.   We thought that totally reasonable for the time they spent on the coach.  Two thumbs up for Bear Auto in Grand Junction Colorado:)) 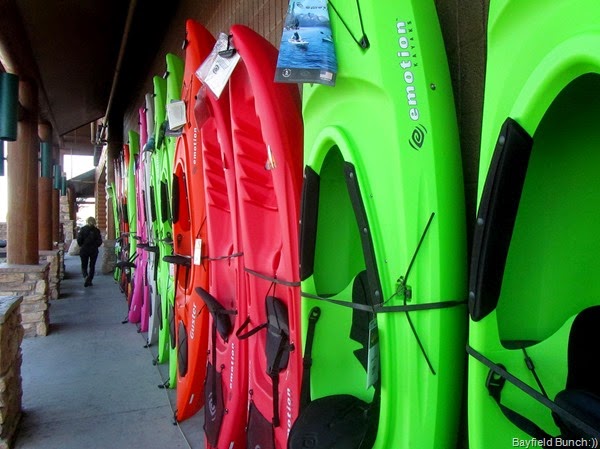 Next decision was whether to hook the Jeep up or drive it separately through the mountains.  Decided to tow the Jeep & see how it went.  If we ran into trouble we could always disconnect it from the motorhome.  We left Bear Auto at 1 p.m. & began the long gradual ascent towards Colorado’s distant unseen mountains.  Many medium grades & the Big EEE ran flawlessly with power to spare.

HEADING EAST ON I-70 OUT OF GRAND JUNCTION COLORADO

We sure came through some beautiful country on our trek east following the Colorado river for a time.  Will be even prettier soon when all the tree leaves begin to bud.  Had it in my mind to maybe make it as far as just west of Denver but by 3 p.m. it was clear it would be better for us to wrap up the day & set out again in the morning.  The big grades in the big mountains are still ahead of us & we probably have another 3 hours drive ahead of us before we make it to Denver sometime Friday morning. 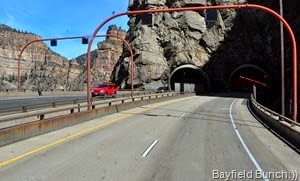 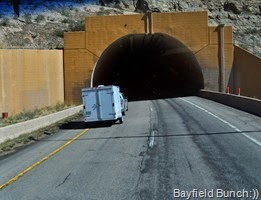 DID OURSELVES SOME MOUNTAIN TUNNELS TODAY WE DID 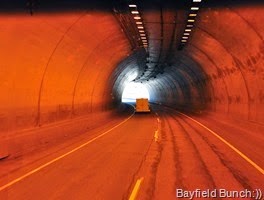 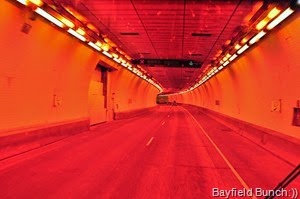 So tonight this post is coming to you from a nice clean Walmart parking lot in Avon Colorado.  We are surrounded by hills & mountains on all sides.  Spotted ‘No RV Parking’ signs in the parking lot so Kelly went in to talk to the manager.  Manager said it was Okay for us to stay the night.  Picked up a few groceries in the store plus a big cooked chicken which we demolished for supper.  Other than all the above that was about it for today.  If luck is with us Friday we should be well clear of the mountains & out on the plains east of Denver somewhere by the time I write Friday night’s post.  We had decided earlier today we just wanted to get this I-70 route through the mountains behind us………………… 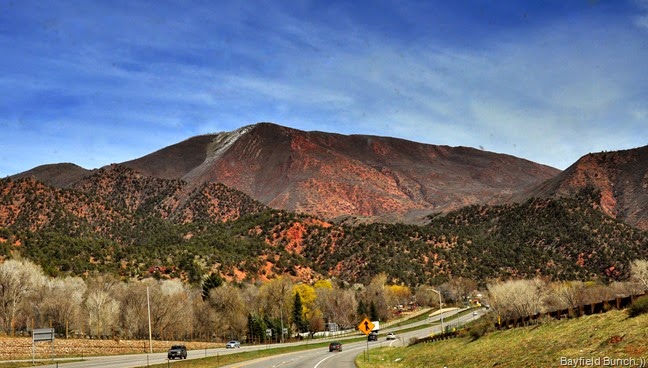 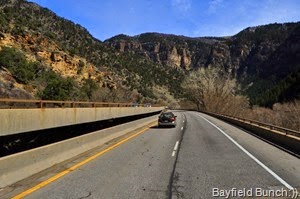 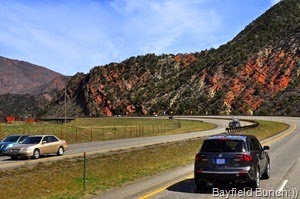 Kelly first noticed something going on with Sitemeter a couple of days ago & Janna from Tin Tee Pee wrote about it in her latest post.  Sitemeter is a program which keeps track of how many people visit a person’s blogsite each day, month, & year.  I’ve had sitemeter since I began our blog about 9 years ago & have watched the numbers grow from 0 visits a day to just under 1,700 visits a day at the moment.  Those growing Sitemeter numbers have always been an inspiration to me over the years & I would hate to have to un-install the site because it’s flashing up ads when people click on my blog but if it is going to annoy readers then it has to go.  Let me know if your seeing annoying ads coming up on my site……………. 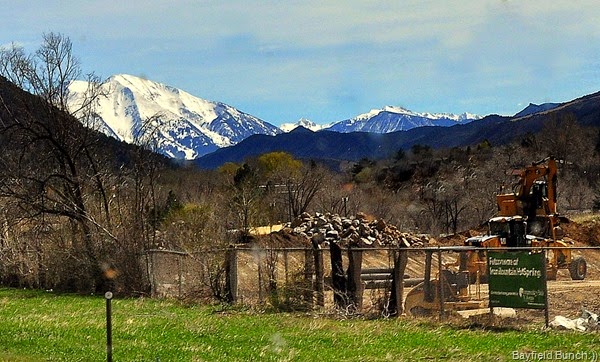 Gene S. & Peter in separate comments wondered if we knew about or why didn’t we take highway 128 heading east out of Moab Tuesday morning.  Have traveled scenic 128 several times before & remembered it has some sharp curves & grades requiring vehicles & especially big one’s to slow down substantially.  With our as yet unknown ‘power loss’ problem I figured it would be better to stay on the 4 lane straight 191 running north to I-70.  That way I could keep my speed up & roll with the momentum.  And yes 128 east of Moab is truly a very beautiful drive & also one of my favorites. 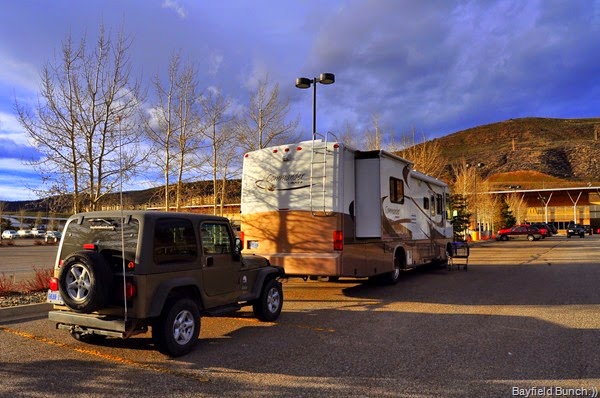 OUR OVERNIGHT SPOT AT WALMART IN AVON COLORADO