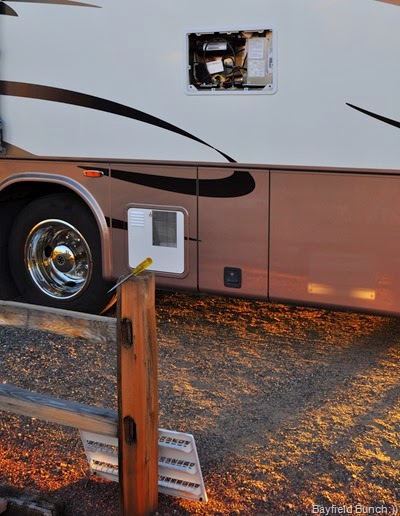 By golly I heard Crickets chirping Sunday night when I took Pheebs out about 8 o’clock.  Now how special is that under a clear starry night sky on our last night in Congress.  Except……it wasn’t our last night in Congress.  We are still here!!!!  Thought we had the problem with our Dometic fridge resolved but obviously not.  Turned it on (gas) Sunday & when we checked Monday morning the fridge part was not working at all but the freezer was cold as ice.  We were not happy campers!!!!!!!!! 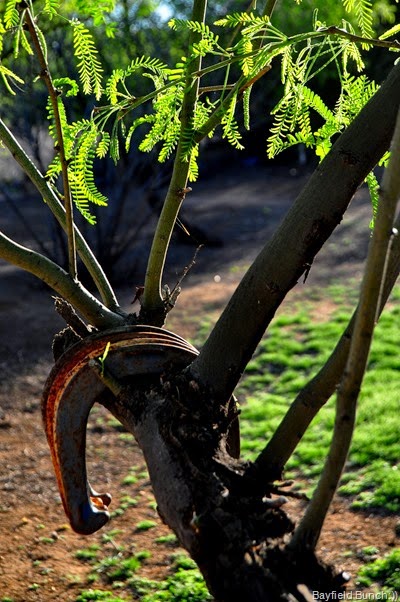 MAYBE WE SHOULD BE LOADING THESE HORSESHOES ONBOARD FOR GOOD LUCK >>>

When Renee from North Ranch was here a few days ago she in passing mentioned there was an RV techy guy she knew living at North Ranch who was available to help folks with various RV problems & projects.  Kelly emailed Renee for the fellow’s phone number & we gave him call.  Vern said he was familiar with Dometic refrigerators & came over to our place first thing Monday morning.  Checked this, checked that, checked the other thing but could not really find anything wrong anywhere.  Repositioned the cold sensing device & we thought it seemed to start cooling.  But as it turns out we only seemed to think that.  Vern told us to check the fridge in a couple hours which we did……fridge was still warm:((  I moved the rig back to it’s normal parking spot with the fridge side in the shade & plugged into electricity to see if at least that still worked.  Nope that didn’t cool the fridge down either.  Needless to say we were again hugely disappointed.  On our trip down it was the inverter problem & now we could be looking at what could be a major fridge repair.  And the fridge is less than 2 years old. 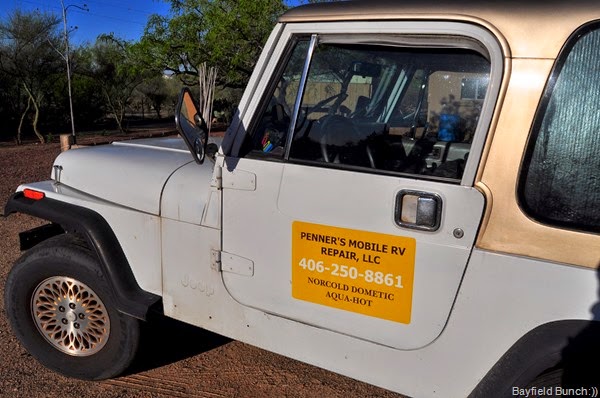 THIS IS QUITE A JEEP VERN TRAVELS IN 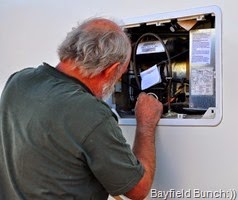 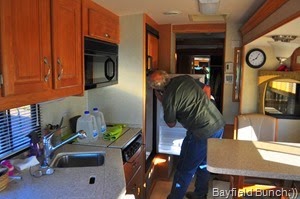 VERN CHECKS OUT OUR DOMETIC PROBLEM 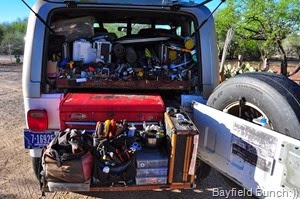 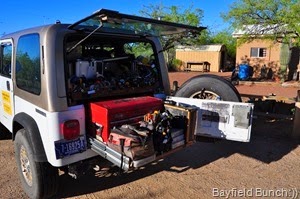 GOT A LOT OF TOOLS IN THAT THERE JEEP 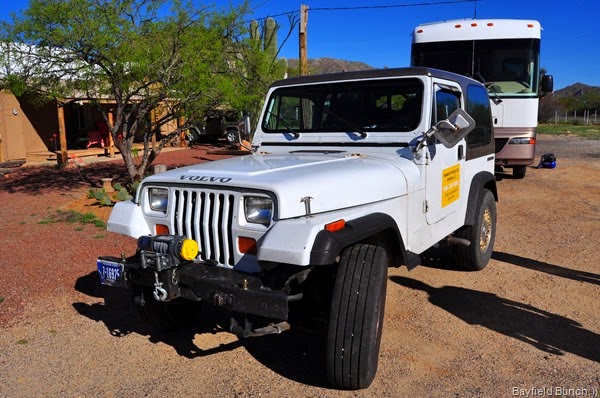 AND GUESS WHAT THAT 1990 JEEP HAS UNDER THE HOOD 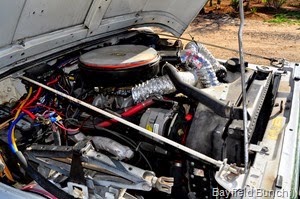 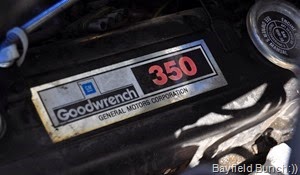 THAT’S A CORVETTE ENGINE WITH LESS THAN 20,000 MILES ON IT

Warm enough Sunday night that I slept with my window open & my overhead fan going.  We were both up shortly after 5 & actually had our morning coffee on the front porch.  Brought my computer out & how nice to sit there in the darkness watching a slow ever lightning sunrise.   Roosters crowing, early birds chirping, nice Moon, & Crickets.  What a nice way to start a day.  If only our day could have stayed that way. 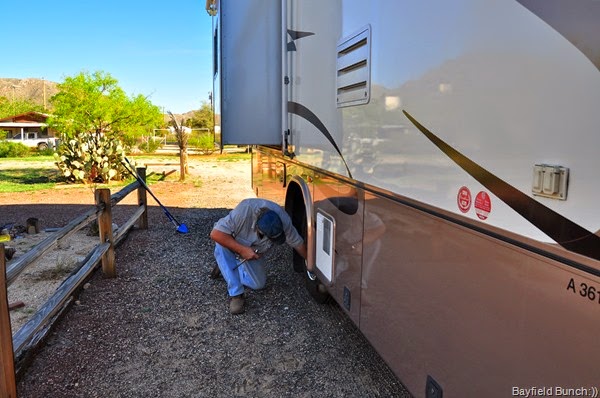 Most of our time on this weather perfect Monday was spent sitting quietly on our front porch reading, stressing out over the fridge problem, & considering our options.  We knew there was an RV repair place south of Wickenburg but after reading reviews about the place we decided it was definitely not one of our options.

LES CAME BY LATE THIS AFTERNOON TO SPRAY OUR WEEDS

Double checked our fridge on electric later in the afternoon & the fridge was still warm.  Time to call in the big guys.  After checking & finding favorable reviews for Camping World between Williams & Flagstaff Arizona Kelly phoned & we have an appointment there for Wednesday morning.  It’s on our proposed route anyway so it just made good sense to go there.  We will put our fridge stuff in coolers & hope Camping World can fix us up.  Sooooooooo looks like we will leave here sometime Tuesday & probably head for the KOA Campground right on I-40 at Williams whereupon we’ll spend the night.  We’ve been there before.  From there it’s just a short drive in the morning to Camping World. 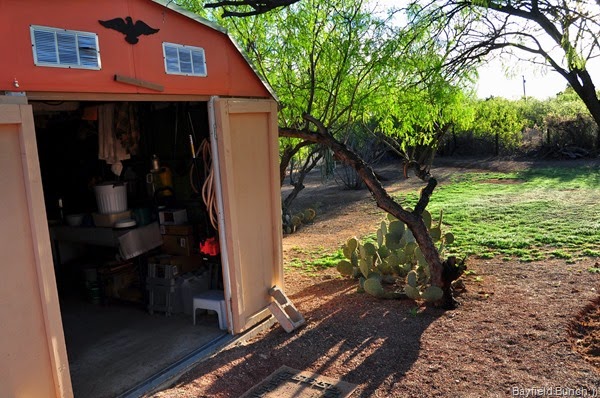 And ‘Oh Oh’ here’s another ‘Oh Oh’!!  Checking the weather forecast it looks like rain is moving into the whole area in a couple days.  Saw some overnight lows around the freezing mark at higher elevations like Flagstaff & the Grand Canyon.  If it’s cold & wet we will skip the Grand Canyon area & head for Valley Of The Gods Utah in search of warm sunny days.  It’s the nice part of traveling without reservations.  Go where you want when you want.  Can’t imagine doing it any other way…………. 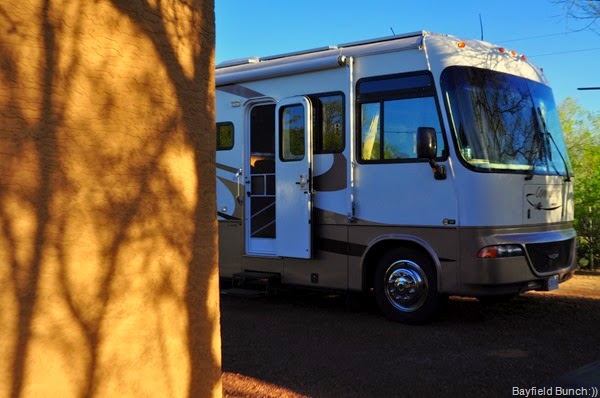 In a comment on my Friday post the Furry Gnome from Seasons In The Valley asked, ‘But isn't there a lot to do to leave the house safely for six months?  The simple answer to this question is ‘yes’ but we do have some positives on our side.  We are fortunate in Bayfield to live in a relative crime free area.  We have watch-full neighbors & we have a fellow who comes in to check on things regularly.  If our house was located in the country it would definitely be a big worry & concern for us.  As much as we would prefer to live in the countryside somewhere there are definite advantages to living in a community & security is one of the biggest factors.   Before leaving in the Fall we have to turn off the outside water.  We set our furnace to 45F & & leave the heat vents open to the bathroom & kitchen where water pipes & faucets are located.  We also learned through experience to replace the batteries in our thermostat as well.   We put our cable TV & Internet service on hold until we return & our neighbor  picks up our mail at the mailroom.  If he thinks there is something in the mail we should know about he emails us.  Anyway that is sort of how we do it……sort of:)) 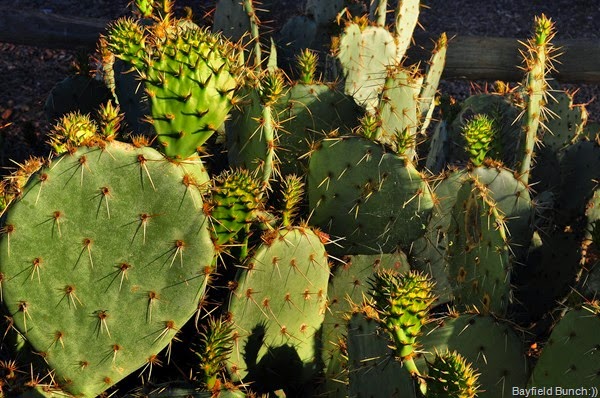 Routine for leaving our Congress house is much the same except for a few differences.  We notify the water company we are leaving & they come & shut our water off after we leave.  Notify post office to forward any mail to Canada.  We turn off the main electricity breaker.  A set of keys over to our neighbors & they check our house for us when we’re away.  Also put our Canadian Shaw Direct TV on hold until we return.  We close & lock all windows then pull the curtains & that’s kind of just about it until we return sometime in the Fall.

CHATTING IT UP WITH LES WHILE HE SPRAYS THE WEEDS

Okay, hopefully tomorrow night at this time my post will be coming to you from somewhere other than here where I am at right now…………………….:)) 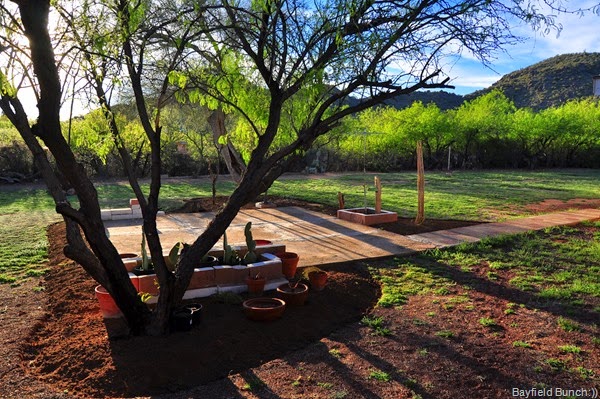 GROANER’S CORNER:(( Comparison of Philosophical Theories in the Late 20th Century:::
Capitalism - He who dies with the most toys, wins.
Hari Krishna - He who plays with the most toys, wins.
Catholicism - He who denies himself the most toys, wins.
Anglican - They were our toys first.
Greek Orthodox - No, they were OURS first.
Atheism - There is no toy maker.
Polytheism - There are many toy makers.
Evolutionism - The toys made themselves.
Church of Christ Scientist - We are the toys.
Communism - Everyone gets the same number of toys, and you are in big trouble if we catch you selling yours.
B'Hai - All toys are just fine with us.
Amish - Toys with batteries are surely a sin.
Taoism - The doll is as important as the dumptruck.
Mormonism - Every boy can have as many toys as he wants.
Voodoo - Let me borrow that doll for a second.
Hinduism - He who plays with bags of plastic farm animals, loses.
7th Day Adventist - He who plays with his toys on Saturday, loses.
Southern Baptist - If your toy is a Disney product, you have a one-way ticket to Hell.
Jehovah's Witnesses - He who sells the most toys door-to-door, wins.
Pentecostalism - He whose toys can talk, wins.
Existentialism - Toys are a figment of your imagination.
Confucianism - Once a toy is dipped in the water, it is no longer dry.
Non-denominationalism - We don't care where the toys came from, let's just play with them.
Agnosticism - It is not possible to know whether toys make a bit of difference.
Unitarian Universalism - We still haven't decided if the toys exist.