WE SURE WEREN’T LONG IN FLINGING OUR DRAPES OPEN THIS MORNING:)) 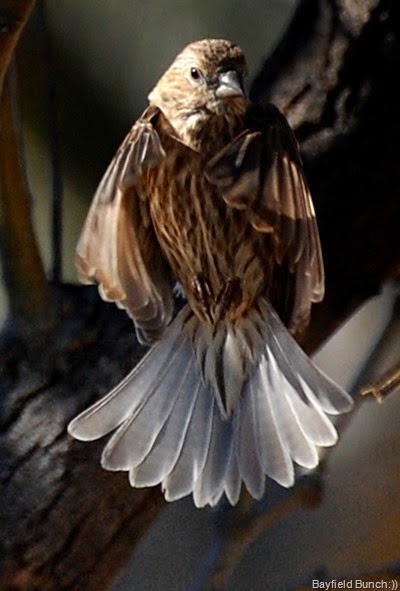 Can’t tell you how happy I was this morning about 5:30 when Pheebs & I stepped out the door under a big black beautiful sky with zillions of dazzling stars overhead.  Clouds all gone:))  Checking today’s 10 day forecast there is nothing but sunshine & 70 degree temps ahead.  We weren’t long in opening all our east side window drapes letting Sunday morning’s warming sunlight spill through & send our gray rain soaked spirits soaring:))

Again taking advantage of soft earth from recent rains I decided to thin out & re-locate some small Joshua Trees on our back yard neighbors property.  Carefully dug up 4 trees & re-planted them at the head of his driveway right next to our south fence & gate.  If they grow they will look nice not only for our neighbor but us as well.  Of course by the time those trees reach maturity we will be long gone but maybe future property owners will someday enjoy my efforts this morning.  I also trimmed back Mesquite branches which were beginning to crowd our fence line as well as along our neighbor’s laneway.  Don’t know if we’ll see our Alberta neighbor this year but if he does come down from Canada his driveway will be clear.  But here’s an odd thing.  A car pulled up to our neighbor’s locked gate Saturday, 3 older men got out & walked up the laneway & had themselves a look all around the property & house.  We’re now wondering if maybe our absentee neighbor maybe has his house & property up for sale.  We’re hoping not because for 2 years now with nobody there it has been so delightfully quiet. 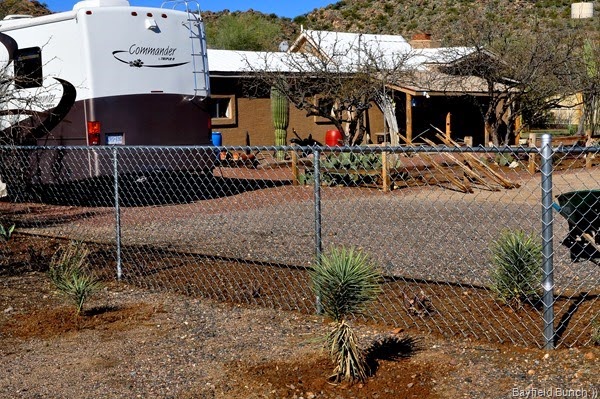 Well here we are at February 1rst already.  A short month from now & we’ll be into March already.  Again our winter season in the southwest seems to be passing quickly.  We will soon have to decide on which route we will take heading home.  Quickest way is Oklahoma City up through St. Louis but it is very unlikely we will go that way.  Just don’t like the big cities & besides we have no reason to hurry on home anyway as long as we don’t put off our departure until the last minute.  Maybe a little early for those travel plans but it’s just something to begin warming up a bit on the back burner.  We had talked about a route down through southeastern Arizona then east on over to Florida to visit Aunt Jean, Kelly’s sister & husband Becky & Norm, Peter & Leslie on vacation there, then up the eastern seaboard to Spencerport NY for a visit with Kelly’s Mother before heading crossing the border & home.  But after our long rough trip down last Fall we have decided the Florida route is just way too much of a long haul for Kelly’s health & for that reason alone we just head straight for Bayfield when we leave here in March.  We’ll see how the summer goes & maybe take a second look at that Florida route in 10 months from now on our return to the southwest for another winter season.  For sure October would be a much better travel month than March. 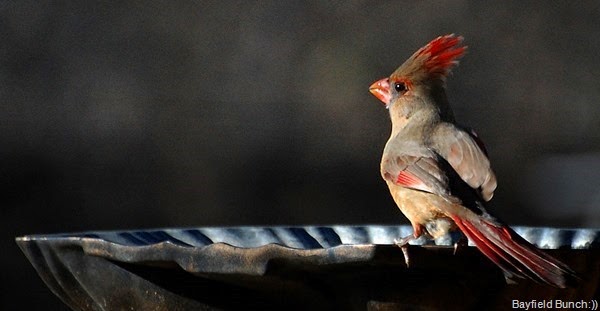 Not a whole lot else to write about tonight.  After my tree trimming & planting this morning the day just kind of slowed down to a crawl.  Tipped back in my chair near our birdfeeder for awhile this afternoon & watched the comings & goings of our backyard birds for awhile.  Managed to snag a few more photos. 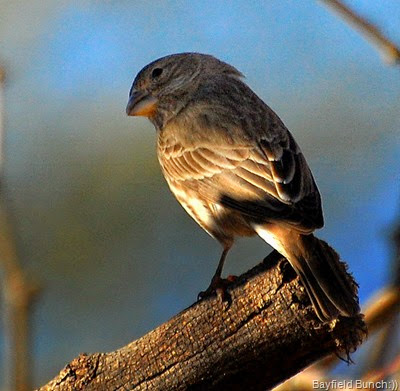 I was just about to hit the ‘publish’ button tonight when Kelly ran into a major dilemma.  I heard a gasp from the living room & quickly hollered “what’s wrong” to which I heard a frantic reply, “I can’t get Downton Abbey, there’s something wrong with the PBS high definition channel”!!!!!!!  Well indeed it was an emergency alright.  The channel reception would come on for a few seconds then go off again.  Kelly was in absolute panic mode.  I right away suspected our satellite dish.  With recent rains I figured the tripod legs may have shifted slightly downward in the soft ground.  I figured right as I raced out of the house & quickly tilted the dish upwards by just a hair.  A happy holler came from the living room & all was well with the world again.  Whewwww, close call I’d say…………………… 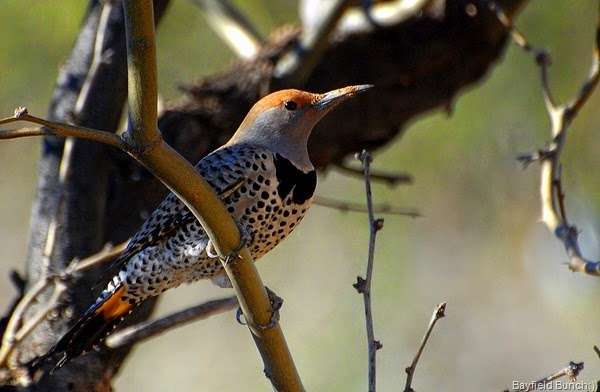 GROANER’S CORNER:(( An Octogenarian moved to a new town and joined the local Country Club. He went to the Club for the first time to play but was told everyone scheduled to play was already out on the course. He was so disappointed, the Assistant Pro said he would play with him and would give him a 12 stroke handicap.
The 80 year old said, "I really don't need a handicap. The only real problem I have is getting out of sand traps."
They both played well. Coming into the par three 18th they were even. The pro had a nice drive to mid-fairway and would be able to get on the green with the next stroke and then putt for a par with the following play.
The old man hit a long drive, and the ball landed in one of the two sand traps around the hole. Shooting from the sand trap on his second stroke, he hit a high ball which landed on the green and rolled right into the hole!
The Assistant Pro was stunned. "Nice shot, but I thought you said you have a problem getting out of sand traps."
"I do," replied the octogenarian. "Give me a hand."