THIS POST IS COMING TO YOU FROM CALIFORNIA’S MOJAVE NATIONAL PRESERVE…….:)) 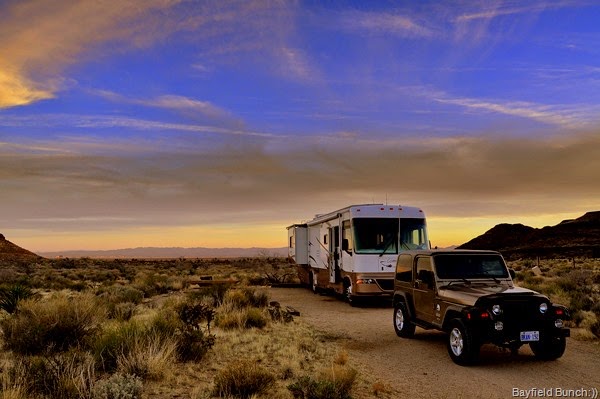 This is Tuesday February 3rd 2015’s post.  No internet signal where we are tonight at ‘The Hole In The Wall Campground’.  I will post this as soon as we can find ourselves a signal somewhere……Wednesday morning & we just found a great BLM spot with a smoking hot internet connection:)))))

Rather than sit around twiddling our thumbs for another day we decided to head out for California’s Mojave National Preserve Tuesday rather than Wednesday.  Nothing holding us in Congress & weather looked good in the State’s San Bernardino County Preserve area.  Finishing up some last minute loading we had the big wheels rolling under clear sunny skies at 9:17.  But within minutes are route plan abruptly changed on us!! 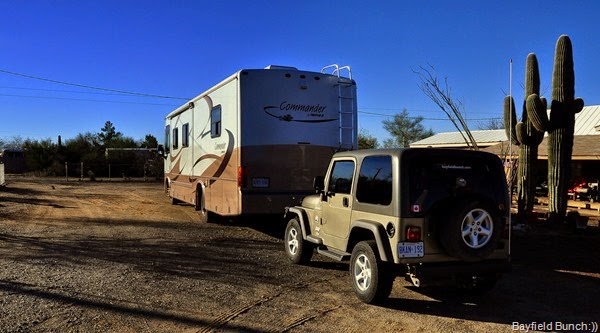 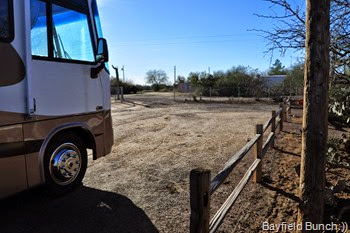 <<< MINUTES AWAY FROM DEPARTURE

We only had a quarter tank of gas in the Motorhome & that was not going to get us to Kingman Arizona.  Plan was to throw in $50 at the Congress gas station then head across highway 71 to 93 & swing north for Kingman.  But wouldn’t you know it……the gas station was out of gas!!!!  Fuel truck was not due in for another couple hours so we had no choice but to head on down to Wickenburg & grab our $50 worth there.  Gas station was right on highway 93 so we just hung a left out of there shortly after 10 & boogied straight north to Interstate-40 whereupon we hung a left & headed west.  We had never driven the stretch of road from Wickieup to I-40 before so that was some new scenery for us. 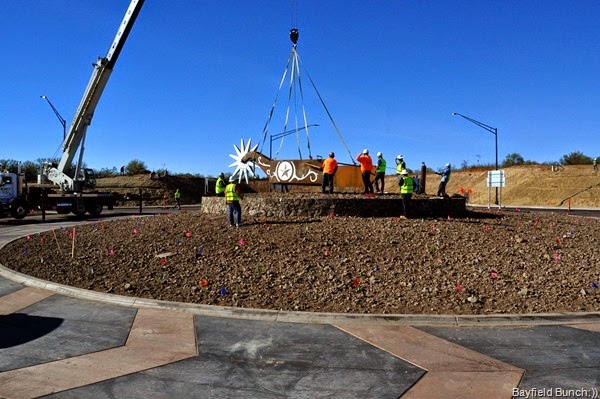 Wasn’t too far until we rolled off I-40 & into a Love’s truck stop/gas station.  Reason we didn’t fill up in Wickenburg is we already had a full tank of fresh water & didn’t want the additional weight of a full gas tank when we knew we could fill up both the rig & Jeep at Love’s truck stop which of course was closer to our destination.  Plus we knew they also had a dump station there & we were needing to dump our gray & black tanks as well.  Also filled up our gas can because this was the last gas stop before reaching California’s higher fuel prices & there is no gas station in the Mojave Preserve anyway. 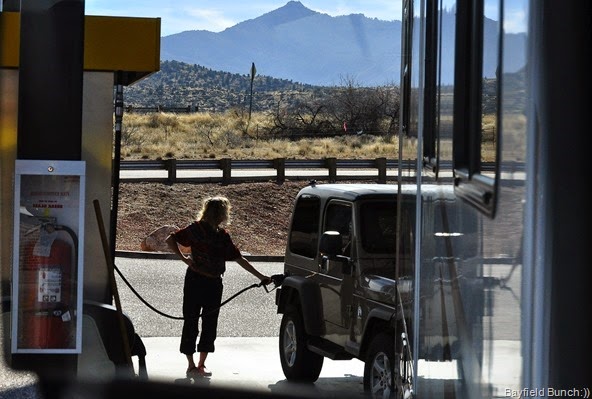 From Loves it was a short hop to Kingman for our next 3 stops.  We got lucky with our first stop in that McDonalds & Flying J were side by each so it was a couple Crispy Chicken Wraps, two coffees then right round the corner into Flying J for a load of propane.  We had thought Love’s had propane but they didn’t.  Lots of room at McDonalds (big dirt parking lot beside McD’s) for our 37’ plus Jeep length.  Tight fit for propane though & barely made a sharp 90 degree getting out of the there.  Back onto I-40 for a couple minutes to the next exit then off again to hit a very, very, crowded Walmart for a few groceries.  Lot of homeless folks wandering around the parking lot & I have never seen so many Walmartians in all my life.  This store was full of them.  Just like you see in some of those Walmartion photos on the internet.  This Walmart had em all & then some!! 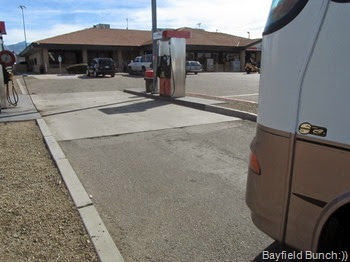 We were soon back on I-40 again climbing & climbing up of the valley floor in one of the longest grades we’ve been on for a long while but at last we made it up to & over Mountain Springs summit in the Piute Mountain range.   Finally reached our Essex road turnoff & exited I-40 for the 20 mile drive north to the Hole In The Wall Campground.  We were now in California’s Mojave National Preserve.  Liked it right off the bat.  Gone was the traffic interstate traffic as we made our way along an old paved road which had seen better days.  Mountains all around & not another vehicle in sight coming or going.  Just the kind of peaceful landscape we have always enjoyed so much.  Mountains crept closer the further we went with Fountain Peak to our left towering to nearly 7,000 feet.  What a majestically quiet place.  Too late we spotted a Class C with a sliver Jeep camped just off Essex road to our left.  Going by we recognized it as Doug & Yuma’s camp from Miss Adventure Travels  Narrow road with sandy shoulders so no place to get stopped & pulled over so we just kept on going.  Sun was sinking fast & we wanted to make the campground before dark.  We’ll catch up with Doug & Yuma later.

THOUGHT WHEN WE SAW THESE HOLES IN THE ROCK IT WAS THE ‘HOLE IN THE ROCK’ CAMPGROUND…..NOPE, STILL HAD A SHORT WAYS TO GO & WE WERE SOON THERE

A great little campground here at Hole In The Wall & despite it’s twisty turny narrow one way roads we were able to navigate ourselves around until we found a spot.  Sun was just setting but I did manage a few quick photos.  What a beautiful area & campsites are spacious.  Even a few small pull throughs.  Lots of spots still empty & we have a good site for the night.  We’ll cruise around this area with our Jeep in the morning & scout out some other places on surrounding BLM lands.  Hopefully we can find a spot with an internet signal.  Here at the Park they have a dump station, pit toilets, & water.  With a Golden Age Pass it’s $6 a night.  Groovy:)) 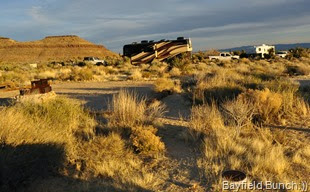 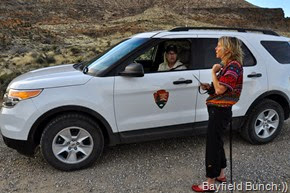 Didn’t want to miss February’s full Moon rising so took my laptop outside & began putting my post together sitting at a picnic table.  It was 5:45 p.m. California time when that old devil Moon slowly hauled itself up over the distant Woods Mountains.  However it was not long before the night’s cold desert air descended like a blanket around my shoulders.  Finally headed inside for a hot steaming bowl of Chili.  Wasn’t long before Pheebs sprawled out on the couch after our long day’s journey & Kelly was in bed by 7:30.  I worked away on today’s post till about 9.  It was comfy warm in the coach & it was another fine day for the Bayfield Bunch:)) 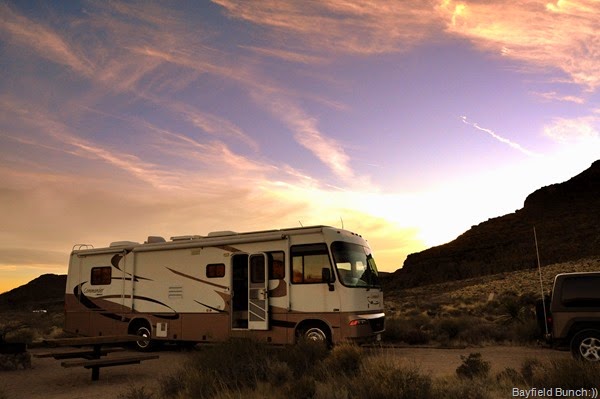 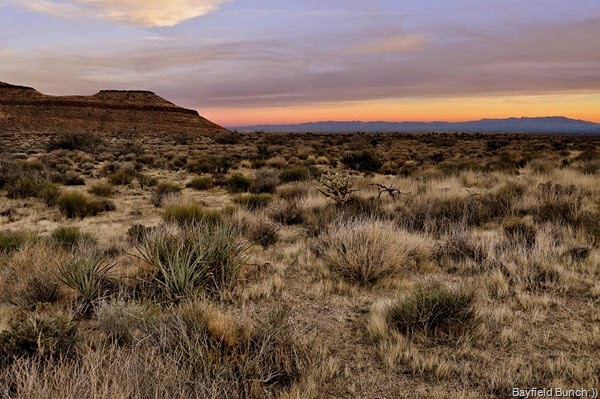 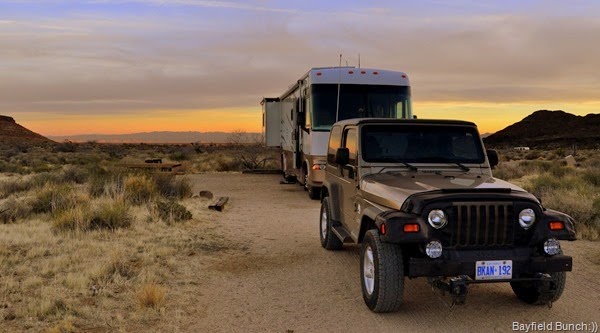 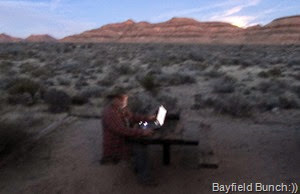 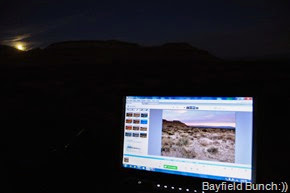 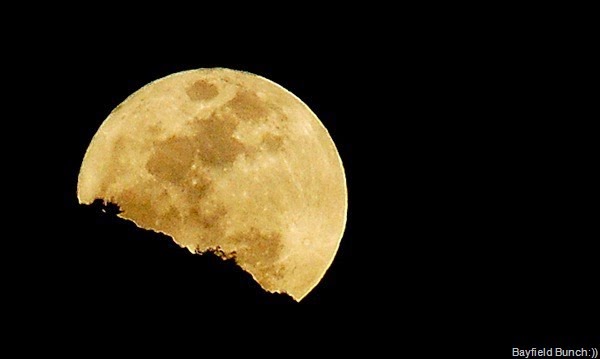 In a world that sometimes seems to be running further amok with each passing day how refreshing it is to read a fellow Bloggers uplifting post simply entitled, Another Good Week.  John Shroeder from Just Finding Our Way is one of those fellows who with his skill set just gets out there & genuinely volunteers to help people wherever he can.  We met John a couple winters ago when he stopped by our Congress house to say hello.  It’s these kind of people our world just does not seem to have enough of.

GROANER’S CORNER:((  A tourist was admiring the necklace worn by a local Indian.  "What is it made of?" she asked.  "Alligator's teeth," the Indian replied.  "I suppose," she said patronizingly, "that they mean as much to you as pearls do to us."  "Oh no," he objected. "Anybody can open an oyster."