RE-PLANTING CACTUS FOR THE 3RD TIME & ‘AWWWWW NUTS’ I BUSTED MY SHOVEL’!!!!

Kelly had a hair appointment in Wickenburg for 9 this morning so rather than end up sitting around the house for yet another long boring day Pheebs & hopped in the Jeep & tagged along.  Just needed to get away from the house for a much needed change of pace. 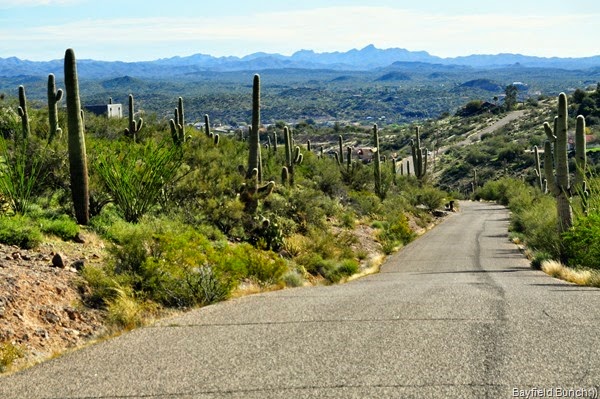 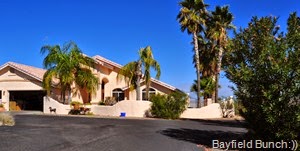 A patchy cloud cover moved in overnight in advance of a predicted 4 days of rain from Saturday till Tuesday dropping our temps into the low 50’s.  A week from today we should be under sunny skies once again & into mid 70 temps.  Luckily our early morning cloud cover dissipated & we had ourselves a nice sunny day. 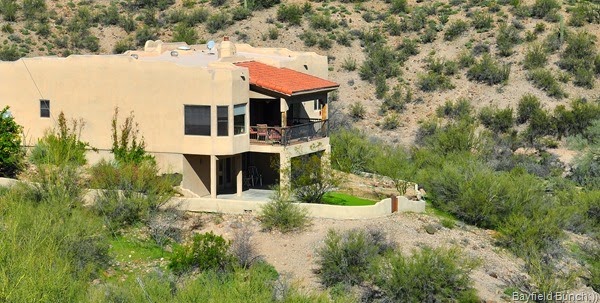 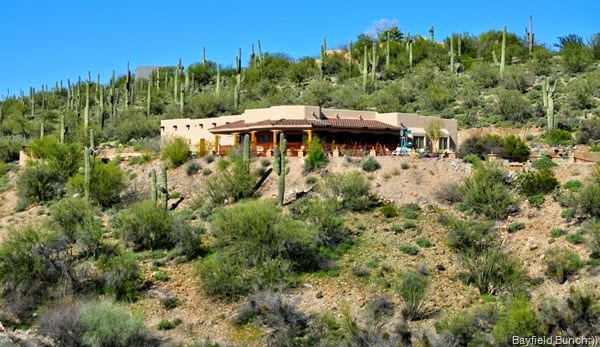 Dropped Kelly off at the beauty saloon & knowing it would be a couple hours Pheebs & I headed off for a coffee at McDonalds, cruised through a car lot & browsed around in the TSC store.  We then took ourselves for a drive out into the hills along Wickenburg’s west side.  Many beautiful homes out that way.  One of the things making Wickenburg such an appealingly attractive place is the fact it is built on a series of hills.  Wickenburg’s richer folks live along the tops of those hills on sprawling ranch like properties with gorgeous views for miles. I have always loved southwestern architecture even long before I had ever even been to the southwest.   Love the pastel & vibrant colors used, the low style ranch houses with their flat roofs.  Oh how I would love a flat roof house where I could go up & sit at night under Arizona’s clear & crisp night skies.  Love the way houses & properties are landscaped with desert flowers, cactus, & trees.  No grass to mow however I think if we lived here full time I would definitely have a grassed in area somewhere just so I could go out & roll around on it & walk on the soft grass with bare feet.  Last time I walked on any kind of plush green grass was Christmas Circle in California’s Borrego Springs. 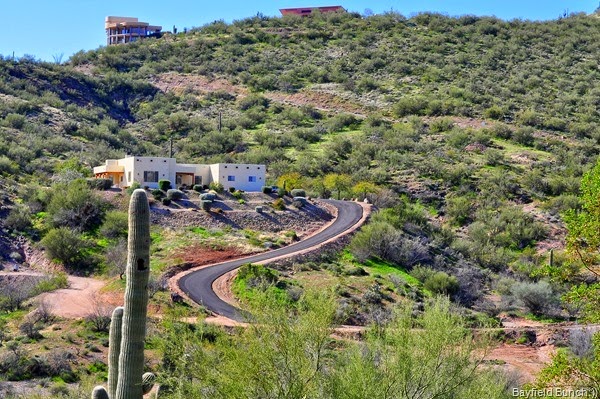 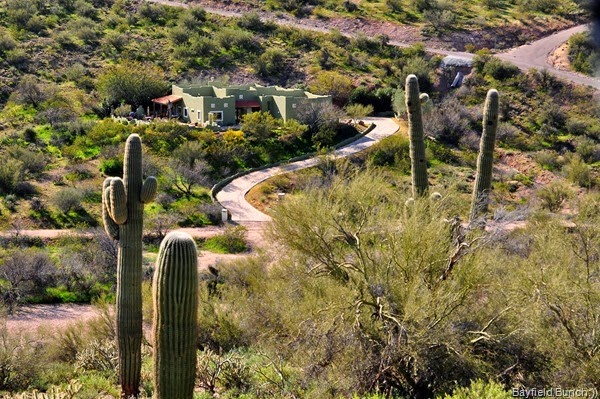 I am sooooo much enjoying my latest book by Bill Bryson entitled, ONE SUMMER America, 1927.  What a great read this is for someone interested in history.  It has been like putting pieces of a puzzle together.  We’ve all heard bits & pieces over the years about people like Charles Lindbergh & Babe Ruth for example.  We’ve all been aware of a few of their accomplishments & that has been about it.  Bill Bryson has a way of tying history together in such a way it is hard to put the book down.  He has chosen the year & summer of 1927 with newsmakers like Babe Ruth & Charles Lindbergh headlining newspapers & sending America into a frenzy.  What a different world it was back then & to me it is fascinating to read just how really different things were.  Bryson covers all the bases & takes the reader behind the headlines & into the very fabric of a lifestyle, time, & era never to be repeated.  Great book & thanks to a couple readers for suggesting it:)) 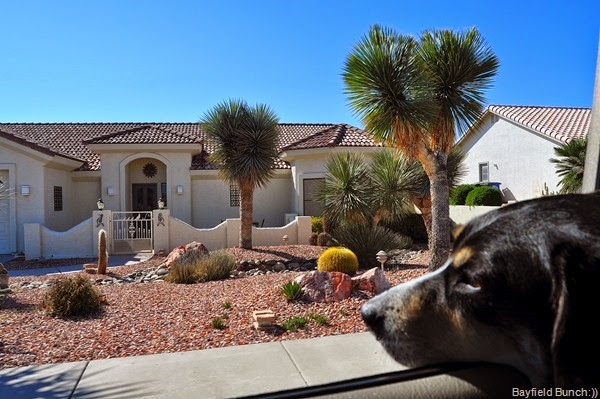 PHEEBS & I JUST CRUISIN THROUGH THE NEIGHBORHOODS SNAPPIN PICTURES 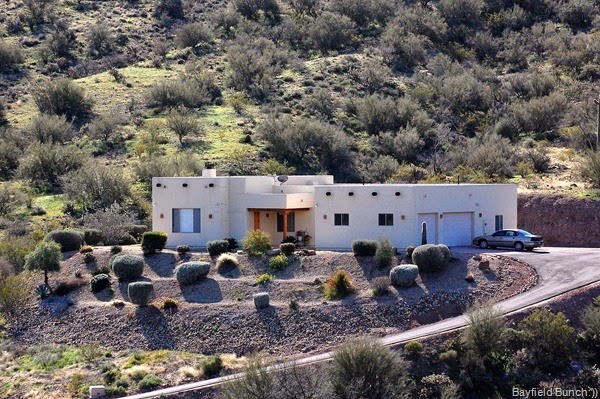 Here’s a quote about the book by reviewer Dianne: {"Babe Ruth hit 60 home runs. The Federal Reserve made the mistake that precipitated the stock market crash. Al Capone enjoyed his last summer of eminence. The Jazz Singer was filmed. Television was created. Radio came of age. Sacco and Vanzetti were executed. President Coolidge chose not to run. Work began on Mount Rushmore. The Mississippi flooded as it never had before. A madman in Michigan blew up a school and killed 44 people in the worst slaughter of children in American history. Henry Ford stopped making the Model T and promised to stop insulting Jews. And a kid from Minnesota flew across an ocean and captivated the planet in a way it had never been captivated before. Whatever else it was, it was one hell of a summer."} 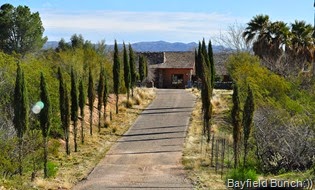 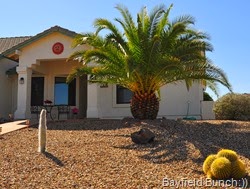 REALLY LIKED THAT BIG TREE IN FRONT OF THE WHITE HOUSE 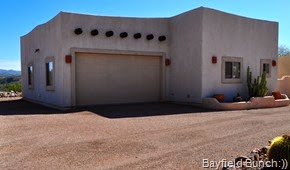 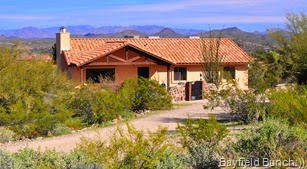 Noticed in the Shout Box someone commented, ‘Sounds to me like you are getting into coming home mode’.  Yes that commenter is correct.  Not going home right now of course but I am looking forward to getting on the road in another month.  I always look forward to arriving back in Bayfield in the Spring just as I always look forward to arriving in Congress in the Fall.  Whenever we make any kind of travel plans whether it be the 2 major trips each year or the shorter ones we do from here in Congress I am always anxious to get on the road & get going.  I’m very impatient that way.  Never mind talking about it…..let’s just do it!!!! 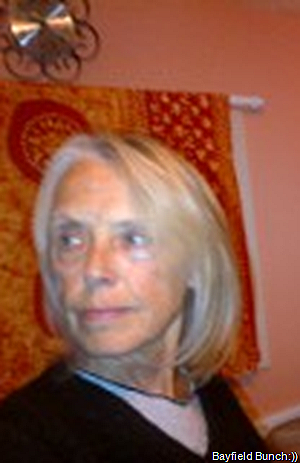 I have an idea which route we will take home this year but nothing definite yet.  We had toyed with a similar route as last year going up through northern Arizona & this year eastern Utah but I’m now thinking we will take a more direct route.  Not the shortest route up through Oklahoma City, St, Louis, & Indianapolis though.  Too many big cities that way & who needs all that unnecessary aggravation anyway.  Interstates work great for anyone in a hurry to get from Point A to Point B like we were a couple years ago when my Uncle Harry died but we’re not in a big hurry this year so we will not be using Interstates all the way home.  And no ED I am not a person ‘who loves Interstates.’ (regarding your comment awhile back)  We simply use them sometimes if & when we are in a hurry to reach a destination for whatever reason such as weather etc.  I remember you telling me years ago you have read most if not all my posts over the years so you know I much prefer quieter secondary roads……………………:)) 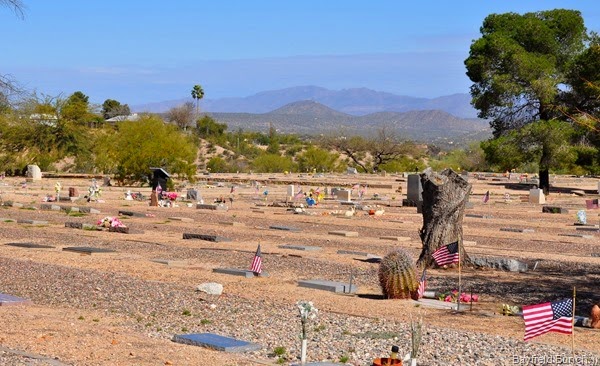 WE EVEN CAME ACROSS WICKENBURG’S MUNICIPAL CEMETERY TODAY 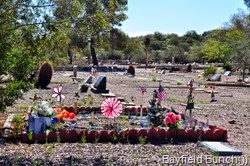 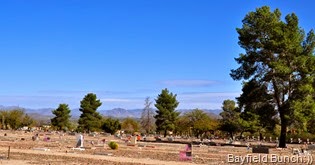 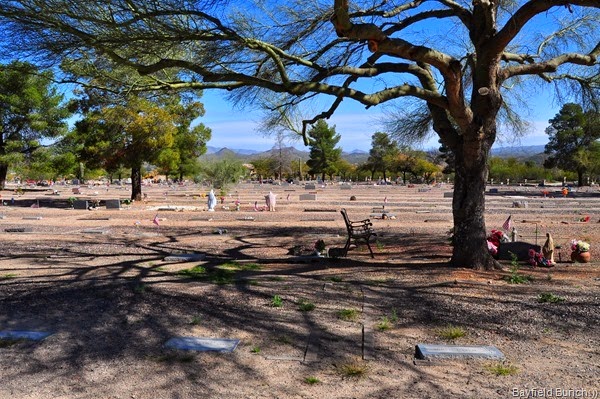 I replanted some cactus plants this afternoon for the 3rd time in less than a week.  When Kelly brought half a dozen cactus pads home from a neighbors I was reluctant to plant them in the ground knowing our resident rabbits would probably start gnawing on them.  Instead I put them in pots.  A couple days later I figured I’d take a chance & put them in the ground anyway so out of the pots they came.  Three days after that I saw 2 pads with nibble marks.  Out of the ground they came & back into pots they went.  Today they came back out of the pots & back into the ground again.  But today I had a plan. 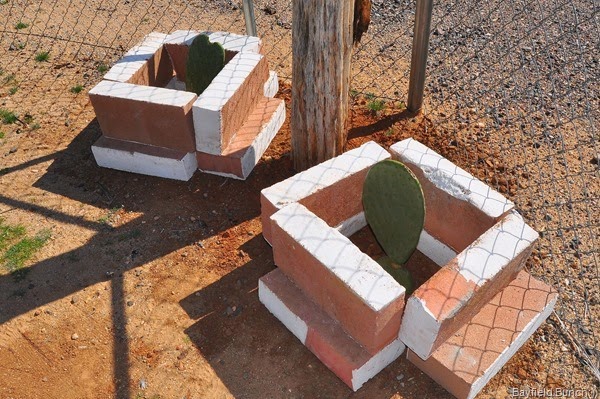 Just last week I moved all our heavy bricks to a different spot & sure enough today I moved about half that pile again.  Only this time I used those bricks to build some small castle walls around each cactus I planted.  My hope is that my brick defense will be tall enough to thwart any wabbit attacks.  I will monitor my enclosed plants very closely now to see if my ‘light bulb moment’ will work.  Reason for my being in the TSC store this afternoon was to see if they had small wire mesh things to go around plants but they didn’t.  That’s when I thought of our bricks.  We shall see……………………. 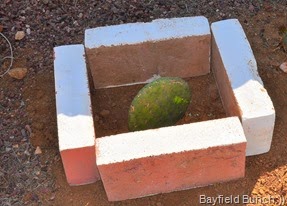 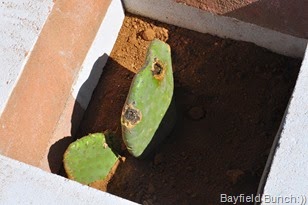 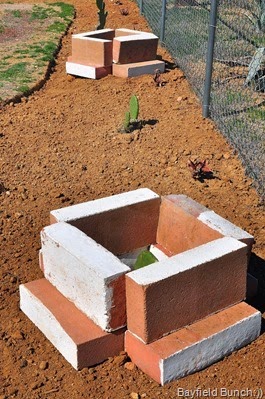 All & all it was a much better day than the last few days when I could not seem to get myself motivated to do too much of anything.  Only downside I had today was breaking my shovel.  This shovel & I have dug a fair few of hard earth holes these past 3 winter seasons.  Bought that shovel brand spanking new I did & up till today it had been a faithful companion.  We were a good team & worked well together.  Shovels just don’t have as long a life span as we people do & that was evident today.  Had some pangs of guilt thinking I may have worked my old Pal just a little too hard but well, I can’t blame myself & life goes on.  Next time in Wickenburg I’ll be looking for my next best shovel Pal & until I find him there’ll not be any more cactus plants going into the ground any time soon………………………. 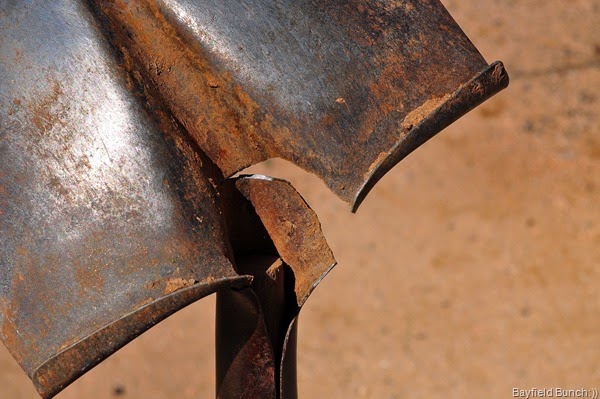 R.I.P. MY OLD FRIEND YOUR DAYS OF DIGGING IN THE ROCK HARD GROUND ARE OVER

GROANER’S CORNER:(( I did my nurse's training at a hospital in Liverpool, England. My fellow students and I had little money for meals, so we ate the awful food provided at the hospital complex.  We often took our breaks in the kitchen, and sometimes kindly visitors would give us some of the treats they had brought for patients who had not wanted to eat them.  One night a woman brought a pie to the kitchen and said to me, "Would you eat this up, love?"  Another student and I devoured every delicious crumb!  Soon our benefactor returned, however, and asked, "Is me 'usband's pie 'ot yet, dearie?"

An older gentleman needed surgery. His son was a renowned surgeon. The man insisted that his son perform the operation.  As he was about to get the anesthesia he asked to speak to his son.  "Yes, Dad, what is it?"  "Don't be nervous, son, Do your best and just remember, if it doesn't go well, if something happens to me, your mother is going to come and live with you and your wife."