BETWEEN RAIN SHOWERS I MOVED OUR BIG PILE OF BRICKS TODAY 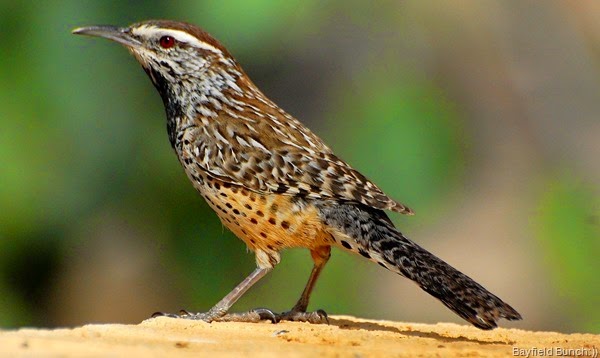 Rains began Sunday evening & continued on & off well into mid morning.  Great for all my newly planted cactus as well as all other desert plants.  It’s these February showers which bring on April flowers.  In the Fall when we return we plan to seed some areas of our property with flowering poppy seeds as well as other easy growing wild flower seeds.  Don’t know why we never thought to do that sooner.

Looking at photos of Bayfield & checking the long range weather it looks like we’ll be into snow banks around our house when we get there sometime early April.  With these record breaking temperatures this year & the amount of snow fall it will definitely be a late Spring.  In one of the photos below we can see Lake Huron is frozen over for as far as one can see & know it will take a long time for all that lake ice to melt.  We live about a mile inland from the lake so our air will be cold for quite awhile.  It’s like living next to a giant iceberg until it all melts.   Also living in a Pine forest means sunshine doesn’t penetrate the tree cover very well to melt snow either.  We had to climb over snow banks to get into our house about 3 years ago & with no warming trend in the long range forecast it looks like we’ll probably be climbing over snow banks again when we do get home in about 6 weeks from now.  Or we may just have to stay here until we know we can get into our driveway & house at home. 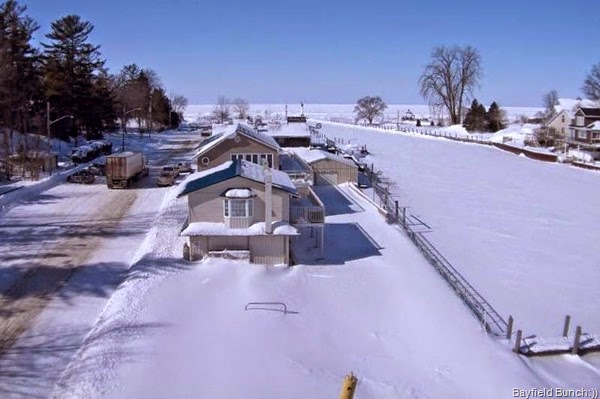 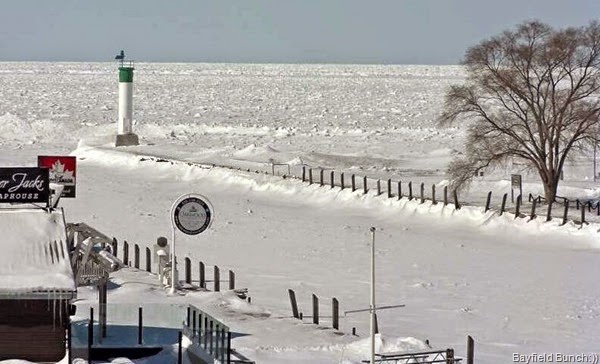 LAKE IS FROZEN FOR AS FAR OUT AS ONE CAN SEE

This mornings project between intermittent light rain showers was to move a pile of bricks from point A to point B.  We had brought these bricks from North Ranch a couple months ago & piled them in a section of our front yard which I have been working on so decided to move the bricks.  Not a real hard physical job but a difficult mental job when I have to keep telling myself, ‘no Al all these bricks do not have to be moved in the next 20minutes’!!!! Getting it into my head I have days, weeks, & a whole month to move them just doesn’t compute in this mind of mine.  Luckily Mother Nature intervened with some showers forcing me back inside but soon as the sun came out again I was back outside.  Bricks are now all moved:)) 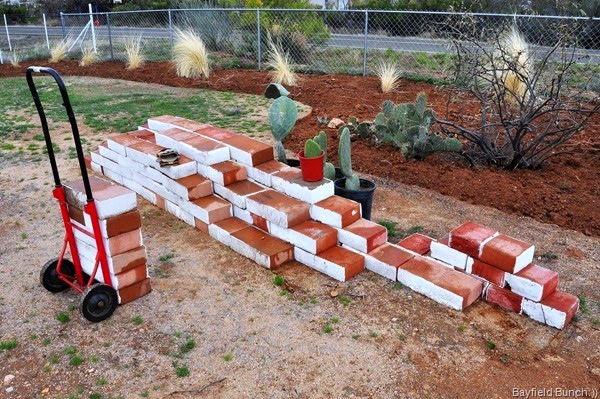 MOVING THE BRICKS FROM POINT A 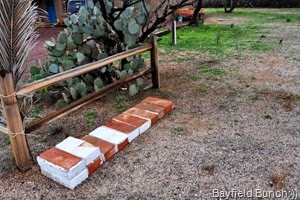 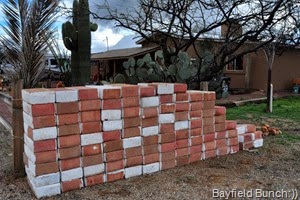 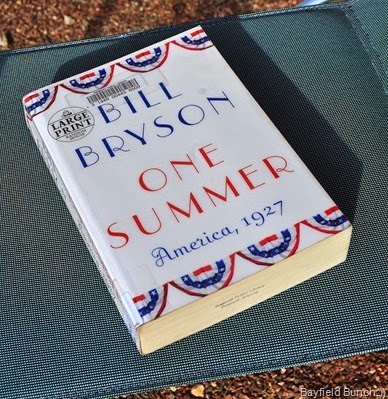 Had to bail out of Bill Bryson’s book on my Kindle entitled ‘A Short History Of Nearly Everything.  I just couldn’t slog through anymore old science histories having to do with chemistry, radiology, cosmology, theories of gongshloobermets, mathematical conflobberzoinks, along with ancient inventors like Geisenschmaltz & Hozen Von Konalblatsenspits.  Now I’m not saying this isn’t a good book because of course it is but for me to wade through protons, futons, banana tongs, rights & wrongs as well as Mossmagator gongs just doesn’t work for me.  However, thanks to readers I today began another Bill Bryson book entitled, ‘One Summer: America, 1927.  Kelly ordered this one from the Library & it is in book form with large print.  Problem with big print is that it makes the book much bigger & heavier so had to hook our trailer on the Jeep to go pick it up.  Started the book today & I am already hooked on completing it maybe sometime in the year 2136.  There are a lot of pages!! 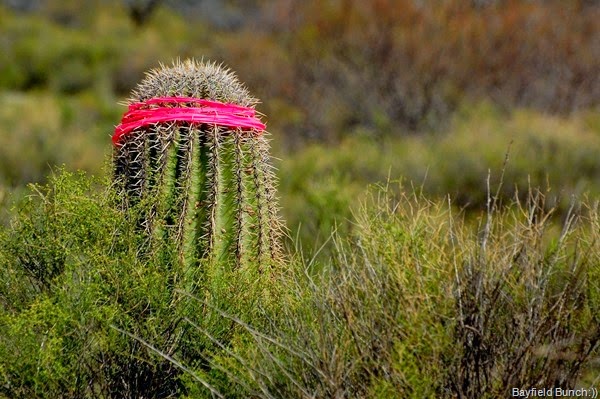 PHEEBS & I SPOTTED AN APACHE SAGUARO A FEW DAYS AGO EAST OF STANTON AZ.

One of our favorite boondocking places is of course Arizona’s Kofa National Wildlife Refuge & for anyone interested in the area regarding camping, what to see, & just about everything else an RV’er would want to know I urge you to read Nina’s latest post entitled, Boondocking Site Review - Kofa National Wildlife Refuge, Arizona.  Nina’s reviews are always ‘must reads’. 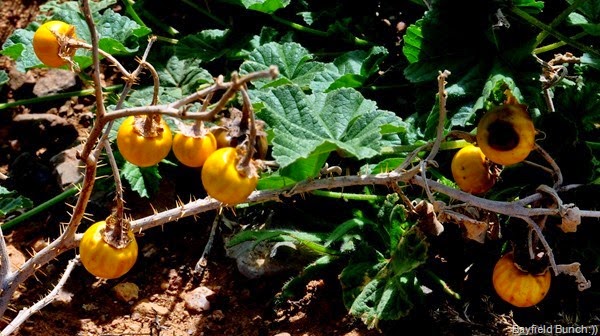 I HAVE NO IDEA WHAT THIS WILD DESERT PLANT IS

Kelly picked up my TSC C.E. Schmidt hemmed pants a couple days ago so now I don’t have the bottom third of my pant legs floppily hanging beneath my shoes.  While there the lady who did the pants gave Kelly a big bag of lemons.  This morning Kelly hauled out the juicer & fired in the lemons for some pure lemon juice.  She poured that juice into ice cube trays & froze them.  Good way to add some flavor to a long tall glass of water on a hot day.  Me, I’ll just stick with my Cranberry-Raspberry juice mixed half & half with water.  Good stuff:)) 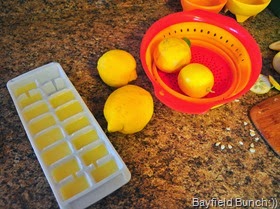 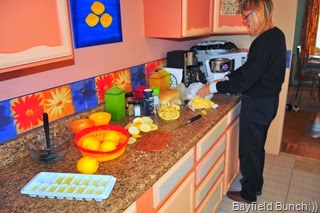 Tuesday February 24th marks the 1 month anniversary of Blogger-Fest 2015.  Amazing how far afield all who were there for those few hours that day have already scattered since then.  All’s I have to do is look at my sidebar to see the distances some have quickly traveled.  RVing truly is a wandering Nomadic lifestyle & I do think that is what makes so many of the on road friendships so special. 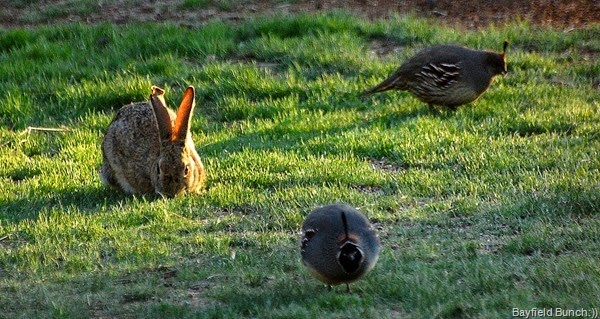 WE HAD QUITE A CREW IN OUR BACK YARD THIS EVENING

And a friendly reminder to Facebook users.  Please do not be offended if I have not responded to your ‘Friend Request’.  I have twice been hacked on Facebook accepting ‘Friend Requests’ so it is something I stopped doing a couple years ago.  I am also not an active Facebook user.  I drop my post into Facebook at the end of each day & unless Kelly draws my attention to something in Facebook I’m not in the habit of using or looking at it. 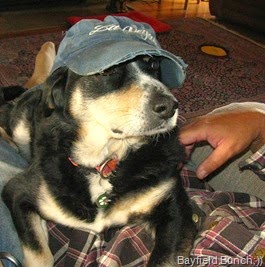 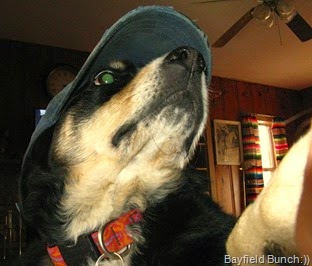 GROANER’S CORNER:(( Nathan is talking to his lawyer. "Here's the deal, Frank. If you're absolutely sure I'll win the case, I'll give you the business."  "Okay," replies Frank, "but before I can give you my opinion, I obviously need to know the facts."  So Nathan goes into great detail about his failed partnership and ends up saying, "So now you've heard everything, do you think I can sue my partner and get my money back?"  "Well," replies Frank, "from what I've just heard, it's clear to me that you will win. It's rare to have such an open-and-shut case."
Nathan goes very white when he hears this.  "What's the matter?" asks Frank.  "I told you my partner's side of the case," replies Nathan.