AN EARLY MORNING DOG RESCUE FOR US 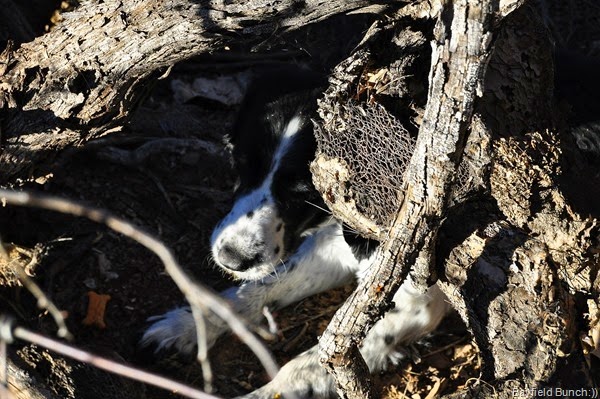 It was about 8:30 while out in our front yard by the road watering a few plants that I heard a sound in the air slightly different than our neighborhood’s usual sounds.  Didn’t pay any attention to it until I noticed the sound was repeating itself.  About every 4 seconds I could hear what I thought might be a far distant cow bellowing in the desert.  But there was something slightly different about this sound as I turned to face it’s source which seemed to be somewhere in the direction of our back yard behind the house.  It seemed to be a softer sound & it seemed to be closer.  Out of curiosity I began walking back across our side yard when I thought I saw a movement behind our fence in the underbrush.  The sound I initially heard had stopped.  I right away thought of Javelinas.  Again I could see movement as I slowly approached our fence line but it was a stationary movement & not like a moving Javelina movement.  Stopping by a Mesquite tree I stared intently at the spot where I had seen the movement & there it was again, something moved.  I walked forward figuring if it was a Javelina it would turn & run but whatever this was didn’t do that & I just could not make out clearly what it was I was looking at.  Could see something white & Javelina’s do not have white coloring on them & the thought of a Skunk never crossed my mind.  I walked closer & ‘OMG’ it was a dog lying in the underbrush. 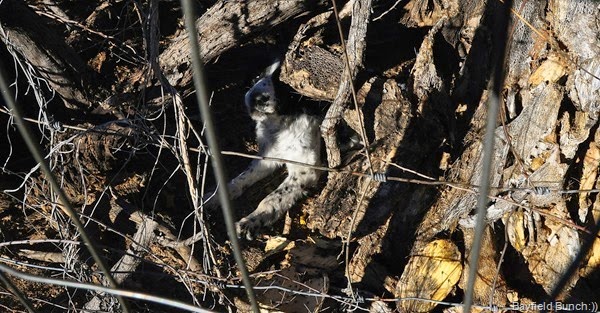 IT APPEARED HE COULDN’T MOVE

Quickly moving closer I right away began talking to it telling it everything was going to be Okay.  I could see it was alive & looking at me but in probable difficulty.  I assumed from it’s quiet nature it was too weak to move & had come as far as our fence line.  Couldn’t go any further & couldn’t turn around.  Looked to be an older dog maybe a Spaniel as it let out a weak growl at my approach.  I quickly turned & slipped into the house to get Kelly & our rescue mission was on.  Pheebe ran up to the fence line & the dog seemed fearful & barked at Pheebs.  I felt it was a good sign that it barked.  We quickly put Pheebs back in the house & Kelly tossed a couple dog treats over the fence for it while grabbed my gloves, a leash, & my big tree pruning clippers & headed out our back gate.  Kelly was not too far behind me with a bowl of water. 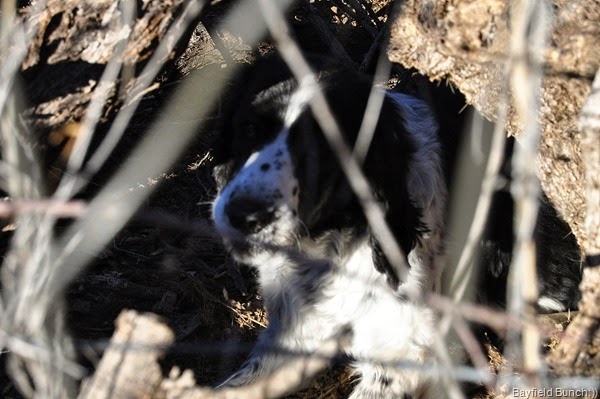 The area behind our house right up to the fence is thick with Mesquite trees, brush, dead Prickly Pear cactus & sharp thorny brambles.  I had made a mental note as to where the dog was located in relation to the north corner of our house.   With that reference point I was able to locate the dog through the brush behind him then began cutting a path through all the tangled branches to get to it.  That probably took about 5 minutes & I did notice something curious.   At no time did the dog turn around to look at me as I slowly made my way to it.  I kept talking to the dog but it didn’t seem to hear me.  Finally I had cut my way in close enough to reach the dog but not knowing if it would snap at me I made some movements with my hand where it could see me.  I sensed the dog was not aggressive so was then able to begin petting it.  Kelly reached in the water dish & I set it down beside the dog.  It immediately began to drink & I took that as another good sign.  I carefully slipped a leash around it’s neck (no collar) & it right away sat up on it’s haunches.  Noticed it’s hind legs were shaking but it did manage to unsteadily stand up.  I didn’t see any apparent damage to the dog.  Bent over I managed to slowly begin backing out along the path I had cut in & luckily the Pooch was able to follow me although slowly.  I had a feeling it knew it was being helped.  We were soon clear of the underbrush & I handed the leash to Kelly who slowly walked the weakened dog back around through the gate onto our property.  I had to retrieve my cutters. 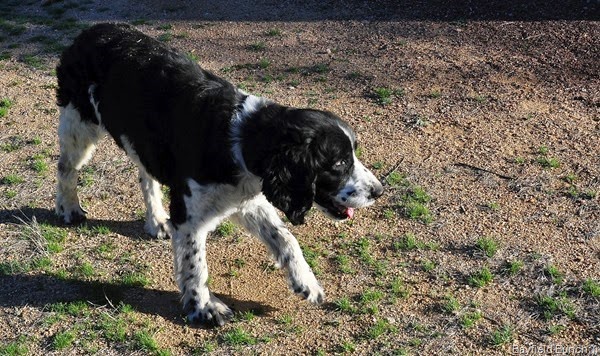 ALTHOUGH STIFF & A BIT WOBBLY SHE/HE SEEMED TO BE OKAY

By the time I got back into our yard Kelly already had a food & water dish out for our rescued dog & it was lapping up water & eating a bit.  It would stop occasionally & slowly walk around on what appeared to be very stiff back legs.  We kept petting it & talking to it as we remarked how fortunate this dog was to be alive especially with all the Coyotes in the neighborhood.  Kelly remembers hearing a dog barking nearby when she went to bed Wednesday night but with all the barking dogs in our neighborhood what’s another barking dog.   We do think it had been there all night.  And then Kelly remembered something else…………. 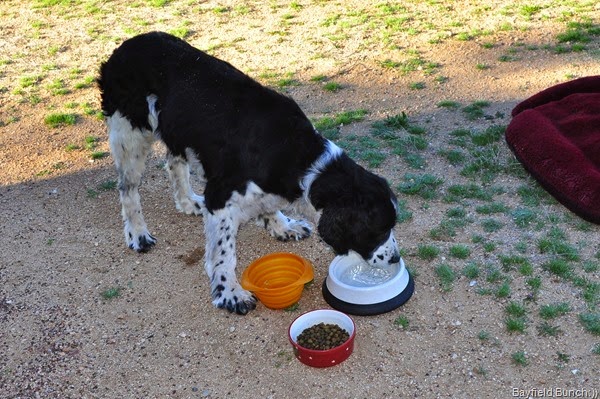 We have a Snow Bird neighbor from Minnesota just across the road & down a bit who Kelly remembers meeting a few times on the road last winter while he was walking his dog in the morning & Kelly remembered the dog he was walking looked very much like the dog we had in our yard right now.   Without further ado Kelly walked over to the neighbors & sure enough it was our neighbors lost dog.  Minutes later the man came bursting into our yard with arms outstretched as he ran towards his missing dog. 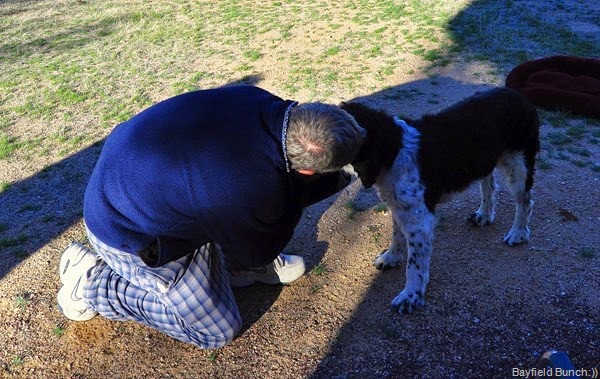 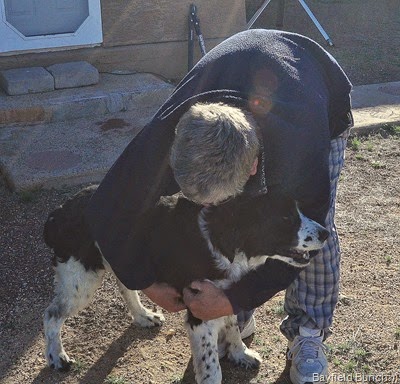 It was a very emotional moment as this man & his beloved dog were reunited & it was truly moving to see how much they had both missed each other.  Our neighbor was just so beside himself with happiness as was his dog Chloe (pronounced KLO-ee) as they continuously embraced each other over & over.  The man fighting back tears of joy & his 16 year old Chloe whimpering & wagging her tail like a little puppy dog.  He said in her recent old age he hadn’t seen her so happy & agile as she was at the moment they were just re-united.  Said he had had her since she was 6 weeks old.  The man’s name was Charlie & he was so happy he gave both Kelly & I both a big hug.  Said he & his wife had gone out to a movie in Wickenburg the night before & did not close their door properly.  Chloe their beloved Springer Spaniel had wandered out & became lost & disoriented.  Charlie said he had been up most of the night fretting & looking for her.  He also told us she was deaf.  That would explain why she never turned to look at me when I was cutting brambles out of the way trying to reach her.  When Kelly hurriedly walked over to Charlie's place this morning he already had a big sign out at the end of his driveway about his lost dog.  Anyway it was a happy ending to what could have been a very sad story & Kelly & I felt very good inside knowing we were in the right place at the right time to help this poor dog.  It was a good thing we came home Monday from our trip.  Had it been a week earlier or had we been a few days or a week later upon returning home Chloe probably would have died right there where we luckily found her this morning……………………… 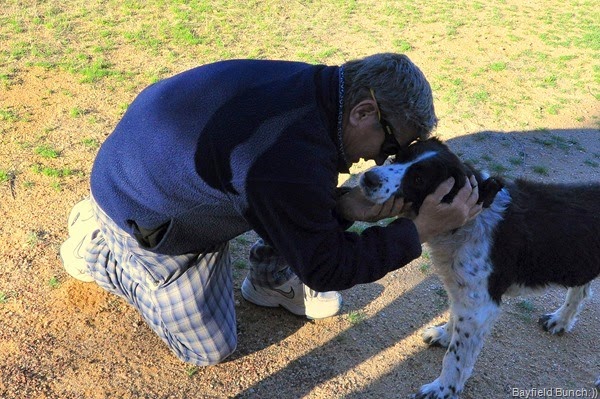 IT WAS A VERY EMOTIONAL MOMENT FOR ALL OF US……………

GROANER’S CORNER:((  A champion jockey is about to enter an important race on a new horse.  The horse's trainer meets him before the race and says, "All you have to remember with this horse is that every time you approach a jump, you have to shout, "ALLLLEEE OOOP!" really loudly in the horse's ear. Providing you do that, you'll be fine".  The jockey thinks the trainer is mad but promises to shout the command. The race begins and they approach the first hurdle. The jockey ignores the trainer's ridiculous advice and the horse crashes straight through the center of the jump. They carry on and approach the second hurdle.  The jockey, somewhat embarrassed, whispers "Aleeee ooop" in the horse's ear. The same thing happens-the horse crashes straight through the center of the jump. At the third hurdle, the jockey thinks, "It's no good, I'll have to do it" and yells, "ALLLEEE OOOP!" really loudly.  Sure enough, the horse sails over the jump with no problems. This continues for the rest of the race, but due to the earlier problems the horse only finishes third. The trainer is fuming and asks the jockey what went wrong.  The jockey replies, "Nothing is wrong with me-it's this bloody horse. What is he -- deaf or something?"  The trainer replies, "Deaf?? DEAF?? He's not deaf - he's BLIND!"