TURNED OUT TO BE A CARDINAL KIND OF DAY 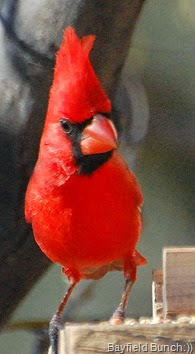 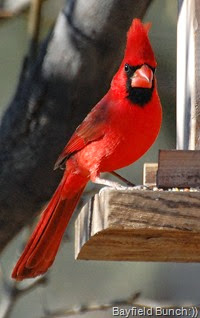 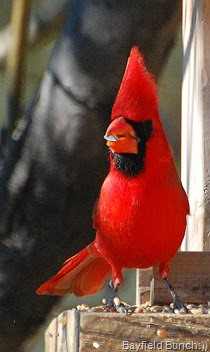 One of my favorite relaxing pastimes here at our Congress home base is to simply tip way back in my outside gravity chair with camera on my chest near the single birdfeeder we have hanging in a nearby Mesquite tree.  Last winter I put out as many as 4 feeders & the little feathered Dickenses nearly ate us out of house & home. Sitting quietly I love watching all the flying antics of my tiny feathered friends.  Sometimes I’m tipped back so far in my chair I can’t see the birds on the ground or lower branches & have to shoot around my shoes.   Just nice to feel a warming sun & hear natural sounds of happy chirping little birds all around me.  So relaxing I sometimes doze off but with each whirring of tiny wings going by I am wide awake again with a quickening grip on my camera:))

REALLY GETTING HIS FACE INTO THE SEEDS

Kelly jeeped off to Wickenburg this morning to have a look at a new kitchen faucet assembly plus a few other things.  I finished my front fence cactus bed then busied myself for hours with a bunch of ‘around the house stuff.’  Both my bathroom & bedroom were due for a good clean up so that kept me busy.  Laundry, vacuuming, & dishes were just a few of my domestic chores.  Haven’t tackled the Motorhome yet but aside from a light desert dusting I really don’t think I need to wash the whole thing this time.  Maybe just the bottom third & wheel rims plus windows. 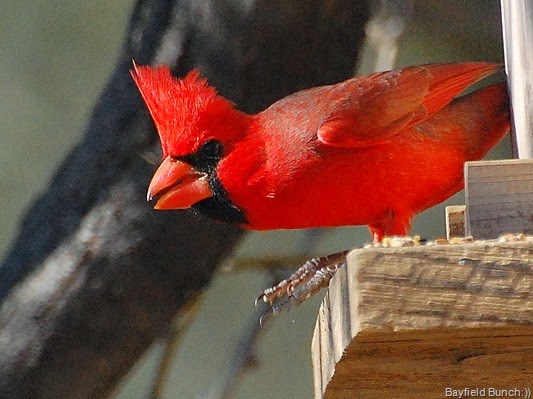 HALF A SECOND AWAY FROM TAKE-OFF 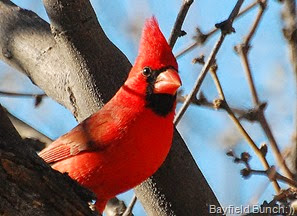 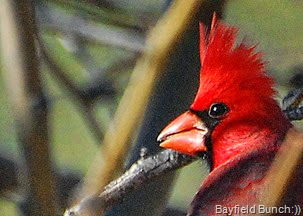 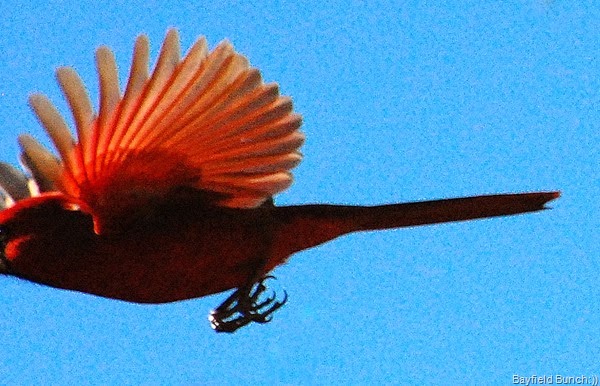 At one point this afternoon completely surrounded by happy chirping little birds coming & going to the feeder I suddenly heard a sharp swish go right past my head to the right as a Goshawk without his incoming screech flew with lightning speed right into the gathering of small birds, skimmed the ground, deeked left then right & landed.  Turned himself around & quickly flew off.  It didn’t appear to me he had caught anything but I could be wrong.  I was instantly aware of an overall deafening silence around me where just seconds before the air had been filled with a cacophony of twittering bird sounds.  This afternoon’s tiny Tweeters had scattered in all directions.  I waited about 5 minutes but no birds returned.  Packed up my camera, tipped forward in my chair, lumbered myself to my feet, & headed off into the house to start editing a few bird photos.  Checked the feeder about an hour later & all the birdies were back:))Today’s Cardinal photos have not been color enhanced, that handsome devilish & rather dapper fellow is really as red as he appears. 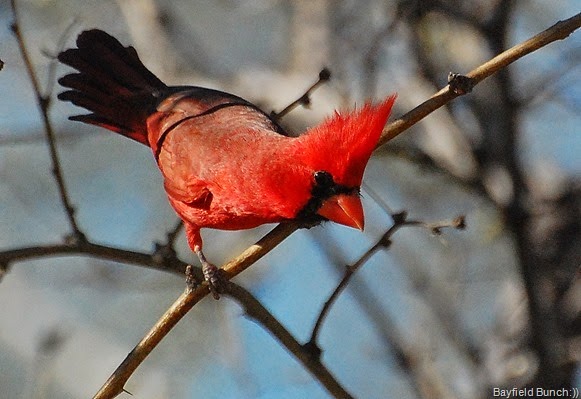 KEEPING A CLOSE EYE ON THE FEEDER BELOW 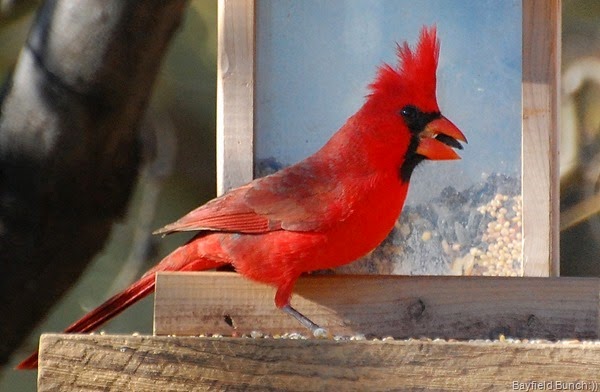 We have a couple surprise RV’ers dropping around in the morning for coffee.  Well not a surprise to us of course because we have already been in touch with our fellow travelers by email.  One of these two folks we met years ago in Quartzite & it is he who writes their blog but the second half of this well known Canadian couple we have never met.  Hint:  This fellow Blogger once flew with England’s ‘Battle Of Britain’ leading legendary war ace Douglas Bader but this fellow RV Blogger is not a pilot.  Stay tuned:)) 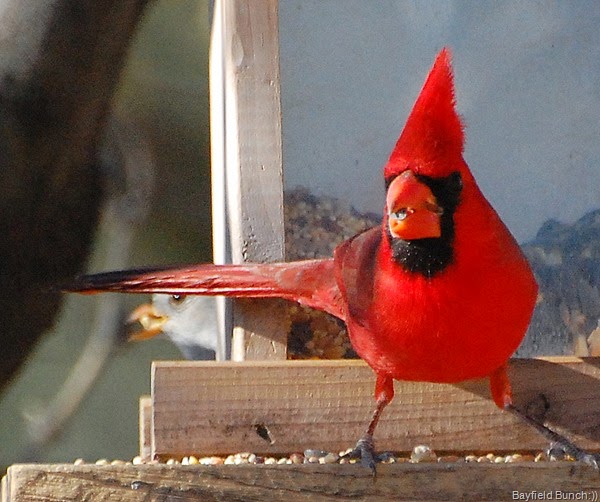 GROANER’S CORNER:((  As the old man lies dying in the bedroom, out in the parlor the family discusses funeral arrangements. Son Gary says, "We'll make a real big thing out of it. We'll have five hundred people. We'll order fifty limos."  Daughter Grace says, "Why do you want to waste money like that? We'll have the family and maybe a few friends. One limo just for us."  They proceed. Grandson Jeff says, "We'll have lots of flowers. We'll surround him with dozens of roses and lilies, dozens and dozens."
Daughter Alice says, "What a waste! We'll have one little bouquet, that's enough."  Suddenly, the voice of the old man is heard, wafting weakly from the bedroom, "Why don't you get me my pants & I'll just walk to the cemetery."